England-based studio Hudson Architects has sent us photos of the Bavent House project.

Completed in 2011, this contemporary four bedoom family home is located in the Suffolk countryside, England, UK. 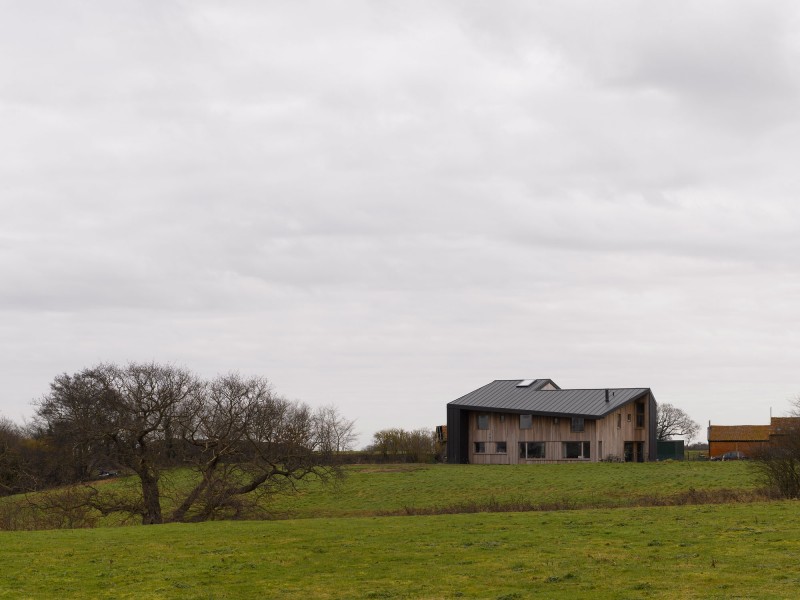 The brief was to create a new four-bedroom family home that responded to the spectacular site with views across salt marshes. Due to the economic climate at the time of construction, it was also intended that the house should be designed in such a way that it could be built over a series of stages, depending on the availability of finance.

The building took as its starting point three key elements. Firstly, the concept of using the form of a traditional beach-hut forms the northeast face of the building. This simple form clad in black zinc cladding is then distorted by the shifts in geometry, which turn to face the views and cut away in areas to reveal a warmer timber cladding.

The building forms a U shaped plan to open up the building and create a South-facing courtyard. Internally this relates to a double height space, which with an office space on the first floor bridge and a large dining area on the ground floor forms the core of the building. From here the building is divided into two wings with a large living room with guest bedrooms above on one side. The kitchen, snug and utility spaces serve as the everyday rooms on the other side with the two main bedrooms above.

Views are framed with a mixture of small and large picture windows to give a varied perspective onto the landscape below. An overhanging roof on the northwest elevation accentuates the sense of looking down onto the marshes as the landscape falls away.

Due to the changes in the economic climate, the project started on an extremely low budget. It was originally intended that the project be phased, in order that a much smaller part of the building would be initially completed. However, eventually the full project was proceeded with. The fit out of the building is quite sparse as a result, but creates a large family house with a simple, minimal aesthetic, in correspondence with the beach hut concept.

The site had formerly been a farm, split up into separate house plots. Consequently, a previous planning application determined the location of the new building. There were few constraints on planning as planning permission already existed for a contemporary house on the site. Similarly, the site was in good condition with very little contamination where an agricultural steel framed barn had previously stood. The local authority planning officers were supportive of the scheme, with discussions focusing mainly on height and planners’ desire to limit development to no more than two storeys with a pitched roof. Planners were also keen to retain the sense of a collection of farm buildings rather than a more scattered distribution.

The key feature of the house is its relationship to the layout of the site. It relates back to the surrounding buildings while also opening up to the views. This also dictates the form of the building. The striking use of the black zinc and Iroko cladding was led by the idea of creating a building that visually resembled a barn with a naturally weathering material that would blend with the landscape of reeds and grasses.

Zinc was chosen as the architects were keen to mimic the silhouette of a beach hut – such as the black tar-clad huts at nearby Southwold. The dark coloured zinc provides a similarly striking silhouette against the sky and continues a vernacular tradition in a very unusual way.

As the site is very windy, small nooks and crannies are cut into the otherwise rectangular footprint of the building to create small sheltered spots. In these areas, timber is used instead of zinc to clad the building to denote shelter and create a suitably softer backdrop. These cut-ins also provide visual interest to the external appearance of the house.

Sustainable aspects of the project

The house utilises a Kensa 16kW twin compressor ground source heat pump with 150m of ground arrays as the primary means of heating. Heating is supplied via underfloor heating on both the ground and first floors. The house is engineered timber frame and uses recycled newspaper insulation in the wall construction. There is no solar thermal or PV panels, although a wood burning stove is included as a secondary means of heating.

Current energy use is 95kWh/m2 per year, and carbon dioxide emissions are 4.5 tonners per year.”