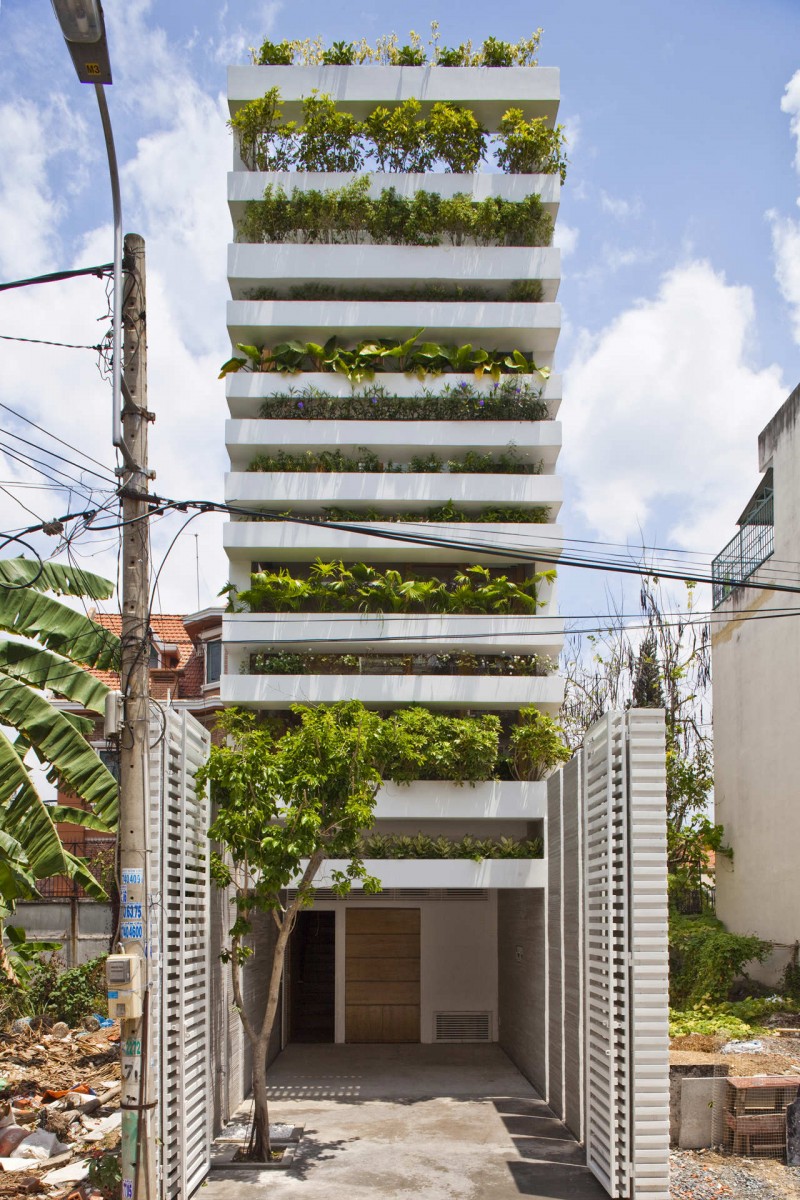 “Whoever wanders around Saigon, a chaotic city with the highest density of population in the world, can easily find flower-pots crampped and displayed here and there all around the streets. This interesting custom has formed the amused character of Saigon over a long period of time and Saigonese love their life with a large variety of tropical plants and flowers in their balconies, courtyards and streets.

The house, designed for a thirty-years-old couple and their mother, is a typical tube house constructed on the plot 4m wide and 20m deep. The front and back façades are entirely composed of layers of concrete planters cantilevered from two side walls.

The house structure is a RC frame structure widely used in Vietnam. The partition walls are very few in order to keep interior fluency and view of green façades from every point of the house. During the day we get the varying light with the time of day trimmed by the top-light in the center. In the morning and the afternoon, the sunlight enters through the amount of leafs on both façades, creating beautiful shadow effects on the granite walls, which are composed of strictly stacked 2cm stones.

The green façade and roof top garden protect its inhabitants from the direct sunlight, street noise and pollution. Furthermore, natural ventilation through the façades and 2 top-lights allow this house to save a big energy in a harsh climate in Saigon. Concerning these ecological approaches, we referred a lot to the bioclimatic principles of traditional Vietnamese courtyard house.

In this chaotic city, we defined the full variety of surrounding greenery as a context of Saigon and applied to the main concept of this house. Although the Saigon townscape is getting uniformed and boring under the influence of the furious urban sprawl of recent years, we intended this house to inspire people to re-define and re-increase the greenery as the character of this city. “Stacking Green” is just one small house, but it is generated from the context of Saigon. We hope that “Stacking Green” makes Saigon become more distinguished and fascinating with much more tropical greenery in the future.”

The Green House by K2LD Architects

Lovelli Residence by World of Mouth