This exclusive 11,500 square foot contemporary home is made of a new six story structure attached to a renovated historic two story brick building and features a cool indoor lap pool on its sixth floor! 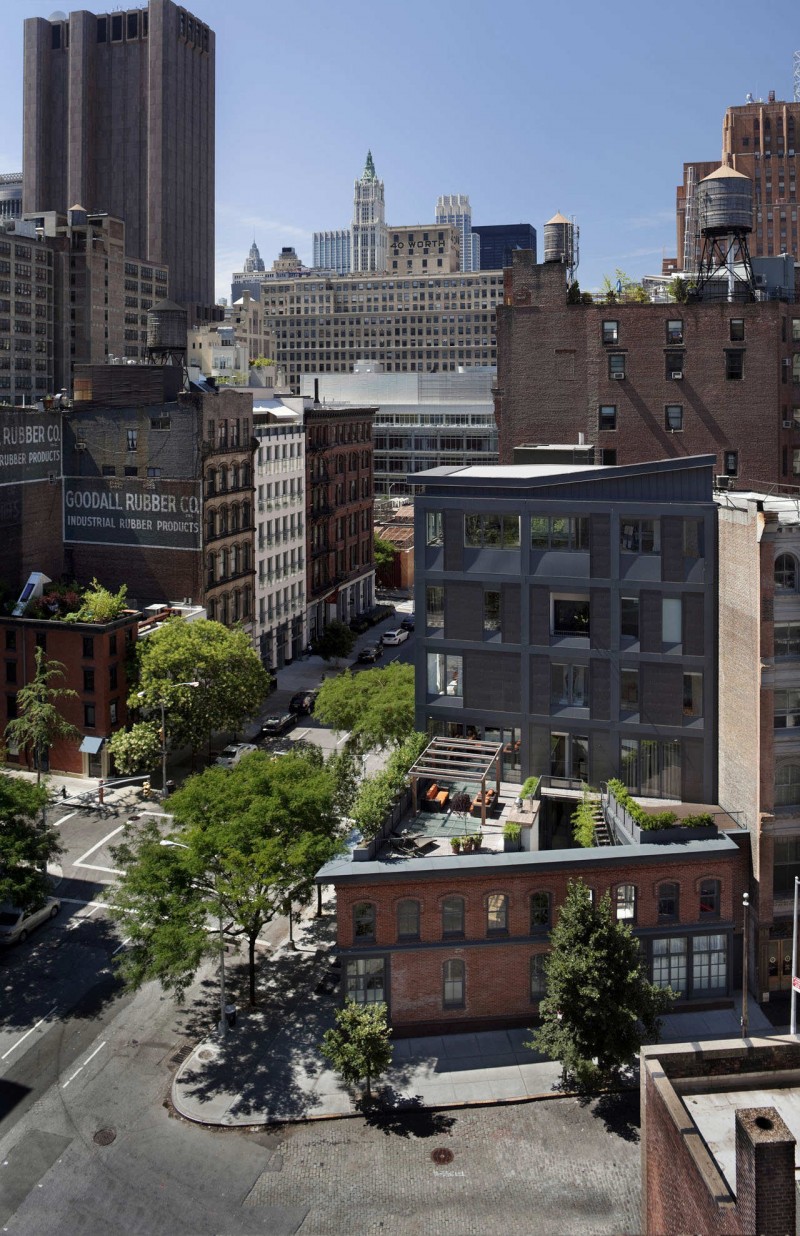 “The two-story brick building on the corner of West Broadway and N. Moore Street lies at the edge of the TriBeCa West Historic District, a neighborhood given landmark status in recognition of the history of manufacturing there. The 1870s-era structure itself was singled out for preservation on account of its distinctive corbelled brickwork, prominent location, unusual acute plan, low massing, and multitude of French- and double-hung windows.

When a financial executive purchased the building and combined it with the adjacent plot into one tax lot, he presented Wayne Turett and TCA with an unusual challenge. The site was zoned for 14,000sf and an allowable 8 stories, but the Landmark status of the corner structure meant it could not be altered, and any new structure on the remaining portion of the site would be limited to 6-7 stories. By a developer’s standard, the site was badly encumbered. In an area increasingly populated by new and renovated condo towers, what could be done with this prominent and light-filled site that would respect its Landmarked status and complement the pedestrian-friendly streets while creating long-lasting value for its owners and the community? And could it be done without sacrificing the contemporary élan that attracted the owners to TCA’s work in the first place?

Turett and his team studied the problem closely with tax lawyers, zoning experts, and teams of preservationists, researching every aspect of the history of the site and its surroundings. By the time a design for a single-family home was presented to community groups and ultimately the Landmark Commission, it showed the design almost exactly as it stands today: a new six story structure attached to the renovated historic brick structure, fully integrated internally, each responsive to the scale and character of the block in its own way. The new tower uses muscular steel framing and composite fiber-cement panels to extend the high-relief and high-detail texture and industrial sensibility of surrounding cast iron and terra-cotta structures. The two-story jewel is painstakingly preserved on the outside, much of it rebuilt from scratch, brick-for-brick and detail-for-detail.

The owner now lives in an 11,500 square-foot home with every amenity. At the second floor, the old and new buildings flow seamlessly into each other internally, forming an open-air courtyard, a huge open-plan living, dining and kitchen area and a media room. The roof of the two-story structure incorporates extensive irrigated roof gardens with structural skylights, flooding the living spaces below with light. Combining the hard edge sensibility of the tower with the softer textures of the historic structure became the guiding design principle inside: bent wood pickets and screens mix with blackened steel detailing throughout; deeply cleft stone complements highly polished wood, glass and tile; cutting-edge concealed lighting is interspersed with handcrafted artisanal fixtures.

Wayne Turett lives and works in the TriBeCa East Historic District, so his firm’s long history with Landmarks on local structures is a source of personal and professional pride. This high-visibility structure, already recognized as a model for responsible development in this increasingly residential neighborhood is the culmination of decades of collaboration with the Commission.”