Completed in 2009, this 1,830 square foot two story contemporary home is located in the village of Aldeia de Juso, orth of Cascais, west of Lisbon, southwest Portugal. 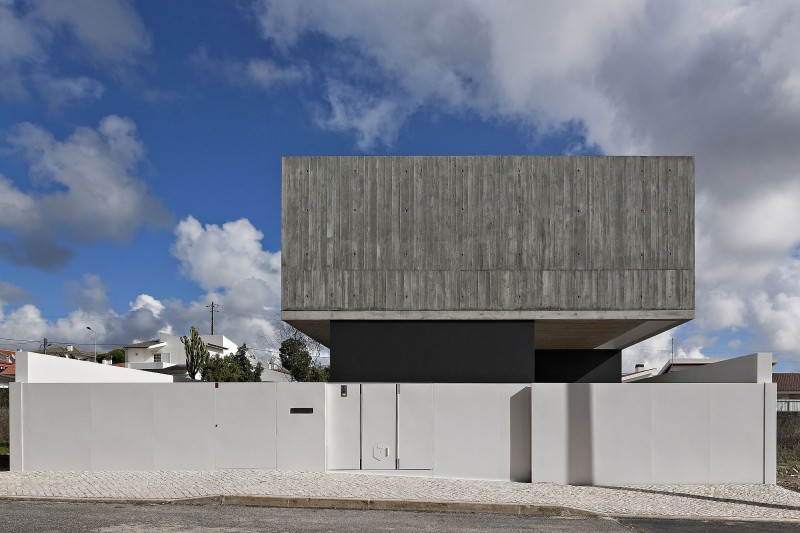 “In the concept for this small house in the vicinity of Aldeia de Juso, the tiniest area of flat land and the house’s, as well as the high density of the new houses yet to be built in the surroundings, forcibly draw us to some sort of “obsession” about the possibilities of dilating space.

Underlying this question, the importance of “expanding” the outdoor space becomes a particular central aspect, since it is also a building integrated in a semi-rural area, where people go looking for the experience of inhabiting garden or open yard spaces.

Bearing in mind that by now the question of “limits” and “precincts” has become a common-place, they appear here as being of utmost relevance.

We propose, after all, to solve and clarify the question, by widening to the maximum the inhabitable premises in their global scope, both in the vertical and horizontal referentials, in both interior and exterior.

The building has been thus structured in three floors, spatially related in profile, each level having specific and different characteristics.

In Level -1, the areas are laid out (as the regulations so demand) under the contour of the ground level . However, this idea of “imposed limits” is to be questioned through the means of “distensions” and “advancements”, to be operated in the three possible directions (north, east and west), shaped as yards and pool. In this floor there will also be included work and service areas.

On the ground level, the limits for the “precincts”, appears widened and defined by the walls around the lot. The inner space is freely configured. Consistent with the strategy of maximizing the presence of the gardened outdoor space, the garage is then left aside to an “inserted” area to the south of the kitchen. All the social spaces of the building are located on this floor.

On the upper floor resides what is the most significant expression of this project. Until the maximum limits allowed by the regulations, was shaped a kind of enclosure of opaque lines encompassing the bedrooms and their respective yards, thus expanding the enjoyable areas and protecting their necessary intimacy.

On the roof level, an accessible terrace finally liberates the eye over a 360º view of the surrounding houses, the sea or the beautiful mountains of Sintra.”

House in Martinhal by ARX Portugal

A Contemporary Rural Home for a British Couple in Gateira, Portugal

A Remodeling in Lisbon, Portugal by Aires Mateus

João Mendes Ribeiro Creates a Minimalist Extension for a Home in Chamusca, Portugal

A Holiday Home in Mallorca by ecoDESIGNfinca