Paris-based studio Stephane Malka Architecture has design the Ame Lot project, a study for a student residence in Paris using wooden pallets to create a new skin for the existing building. 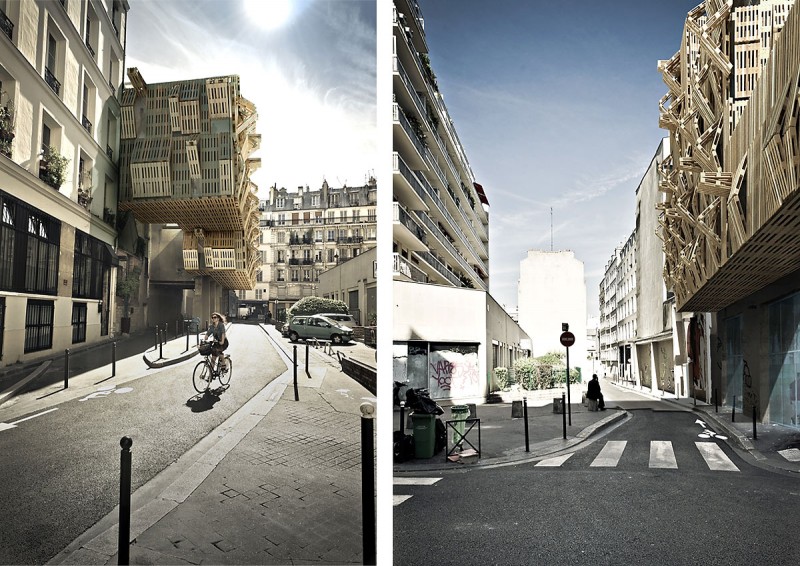 “In reality, ecological strategies often generate an over-production of materials, becoming energy-vores and clients of factories, the polluters of the world. The real ecological combat is within the re-appropriation of materials and experimentations with ready-made objects, far from the so-called benevolence of subsidized agencies. The student housing on rue Amelot is a project that inserts itself into an urban interstice: the thickness of a blind wall.

It’s within the thickness of these walls that this thin building is constructed. The urban form is a strict extension of the blind walls, which houses using the existing.

No building is destroyed, and no pollution generated. The skin consists of an existing module: the wooden pallet.

The modularity of the various palettes creates varied geometries, which are based on use and constantly regenerated.

The re-appropriation of materials recycles the existing without additional processing, which would cost energy in terms of production and create byproduct pollution.

The real environmental approach consists not in destruction, but in superimposing interventions upon our built heritage.

It consists of a new land strategy, unreferenced on a parcel, constructed in a de facto “ecology” of means.”