Completed in 2009, these two attached homes are located near the town of Benicassim in Castellon, Spain. 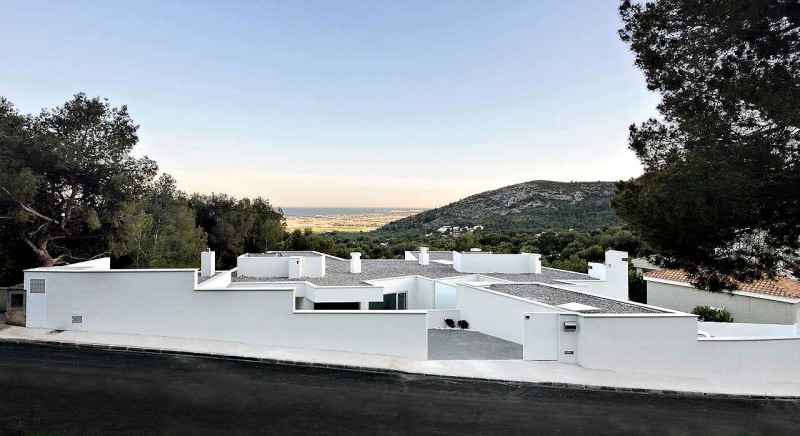 “The site is surrounded by pine trees on an isolated estate that began being built in the seventies, near the town of Benicassim in Castellon, Spain. What really stands out about its location is the views.

The plot, with its steep slopes and irregular geometry, is situated on top of a hill overlooking the sea in the Montornés neighborhood. Its main access point is down a public road leading from above.

The project was born out of this difficult terrain which, rather than proving problematic, helped guide the architect’s work. Following the edges of the plot’s perimeter, the two houses are joined together as one.

The layout aims to make the most of the available space and complies with building regulations dictating minimum space distances from the edges of the plot – three metres from the eastern edge and five from the western.

The house’s relationship with its surroundings is based on a series of wishes that the owners (two matrimonial friends) and the architect expressed – both houses must have their own sense of privacy whilst still opening up the space to the stretches of land and sea, they must be well-lit with natural ventilation and plenty of common space (a shared garden), direct sunlight must not hit the inside of the houses, the existing features of the immediate surroundings must not be spoiled (e.g. the sea view from the access road to the north) and the building must be constructed economically but to a high standard, using the least number of materials possible.

A series of transition spaces between the inside and the outside – very common in popular Mediterranean architecture – work together to build a relationship between the houses and their exterior. These give the houses a sense of order and control; the interiors are extendable with sliding glass doors, the windows can be hollowed out and these spaces create new corners, meaning the space can be lived in or used for any unexpected purposes.

Since the start of the project a robust working log has been in place and there has been an ongoing dialogue between the architect, the quantity surveyor and the owners. This collaborative style of working means that aspects of the project can be changed and details redefined over the course of the construction process.”

The House Between by Clément Bacle Architect