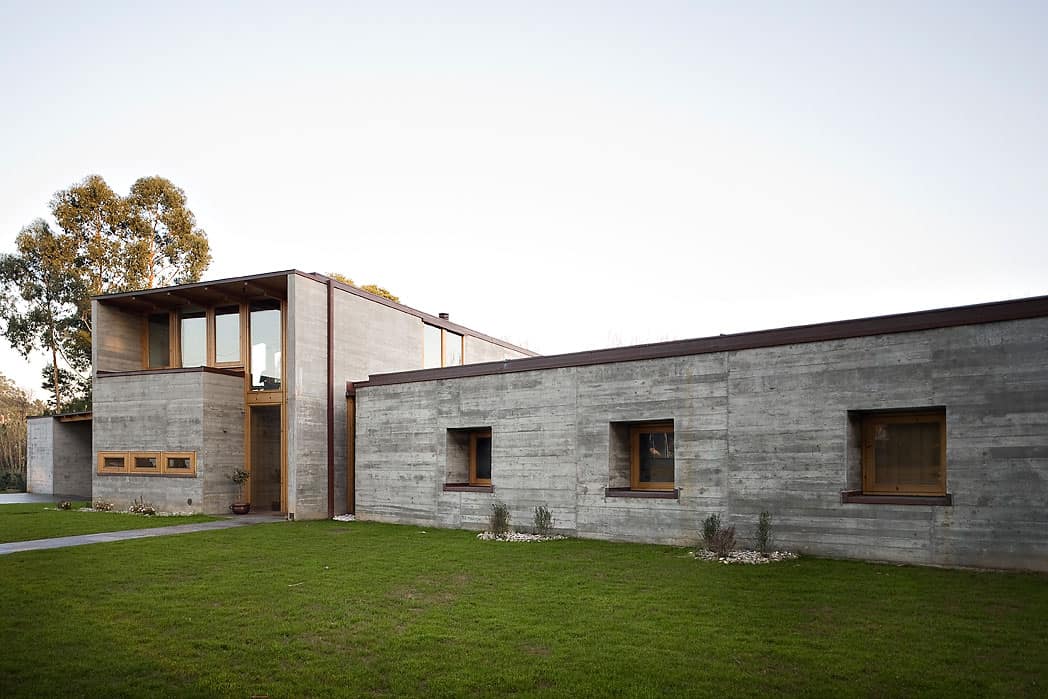 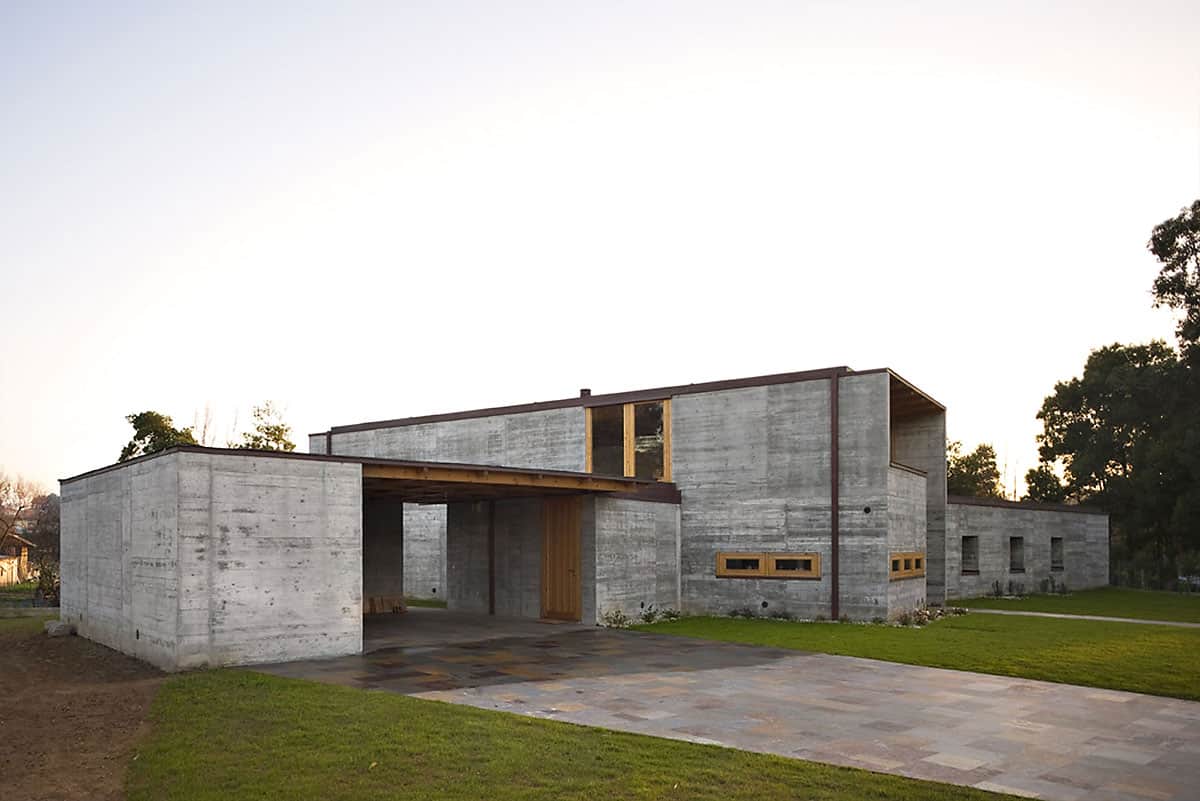 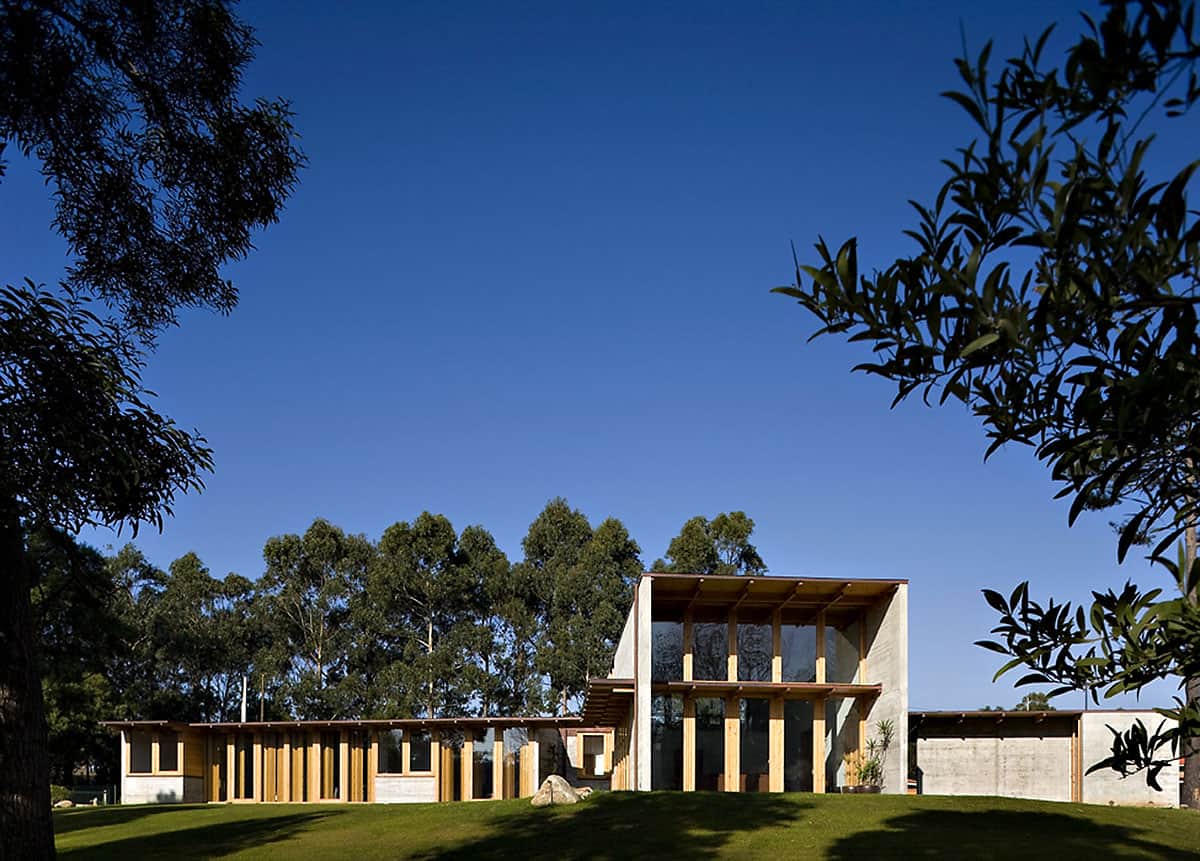 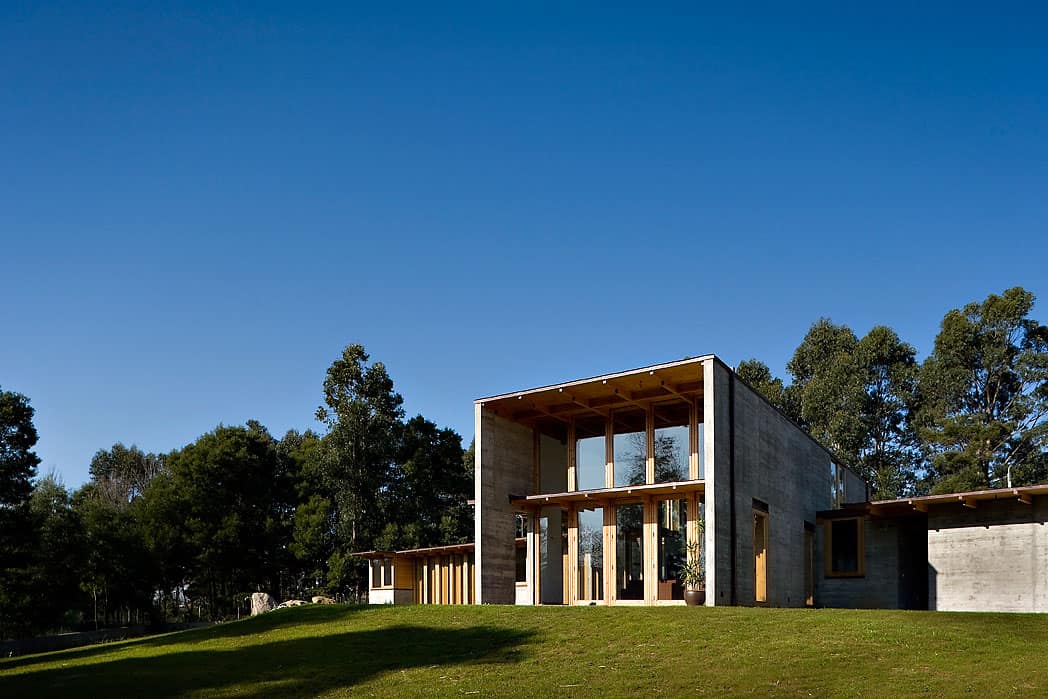 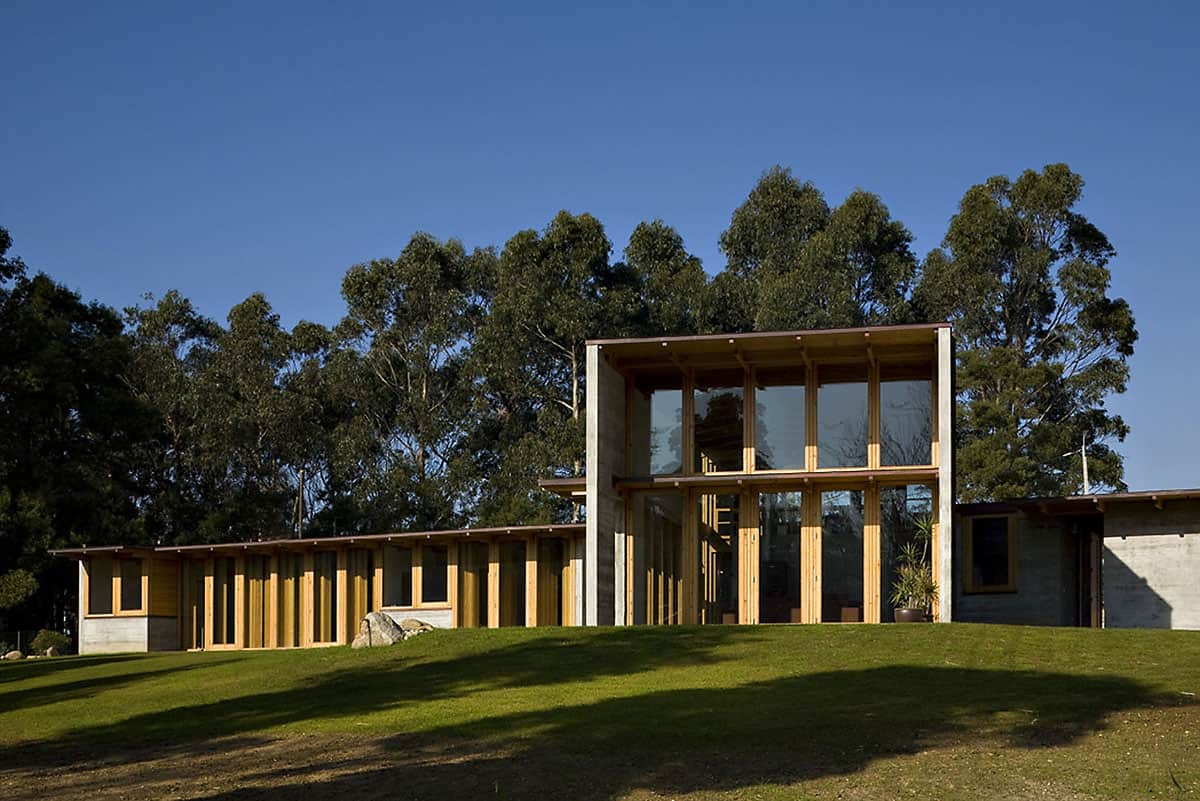 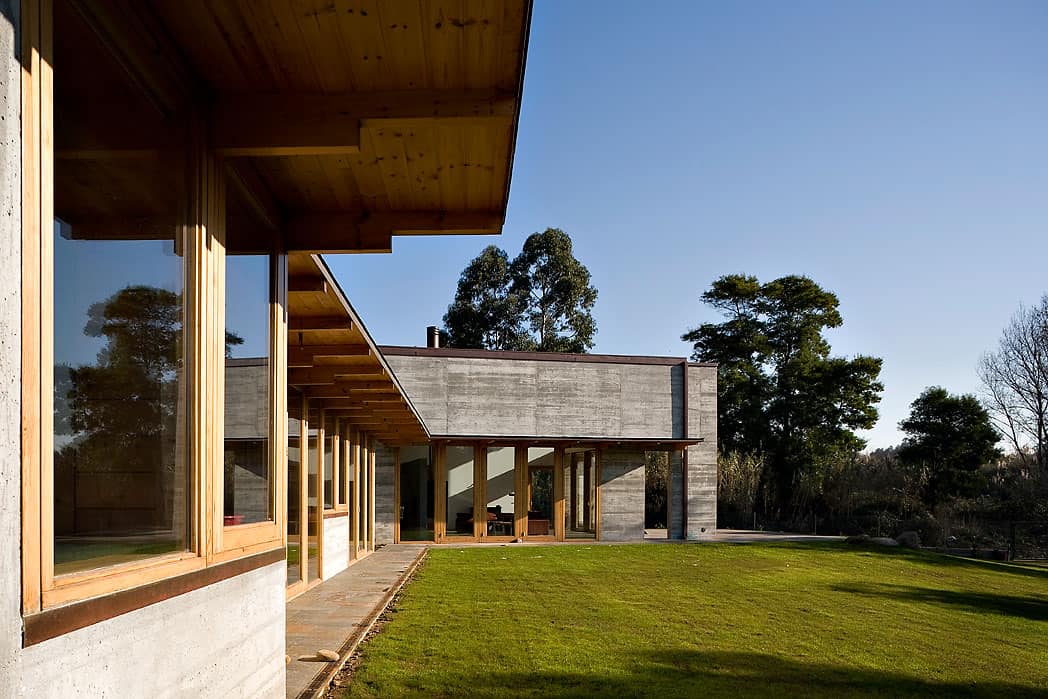 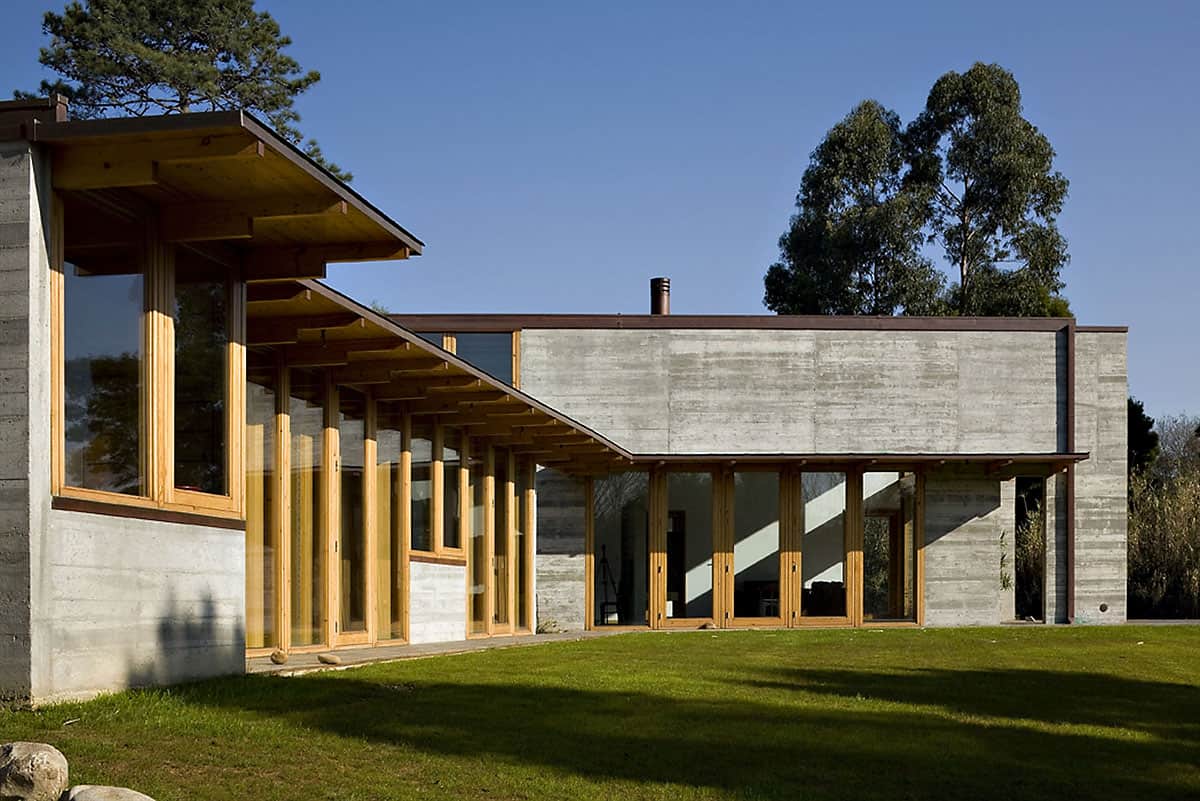 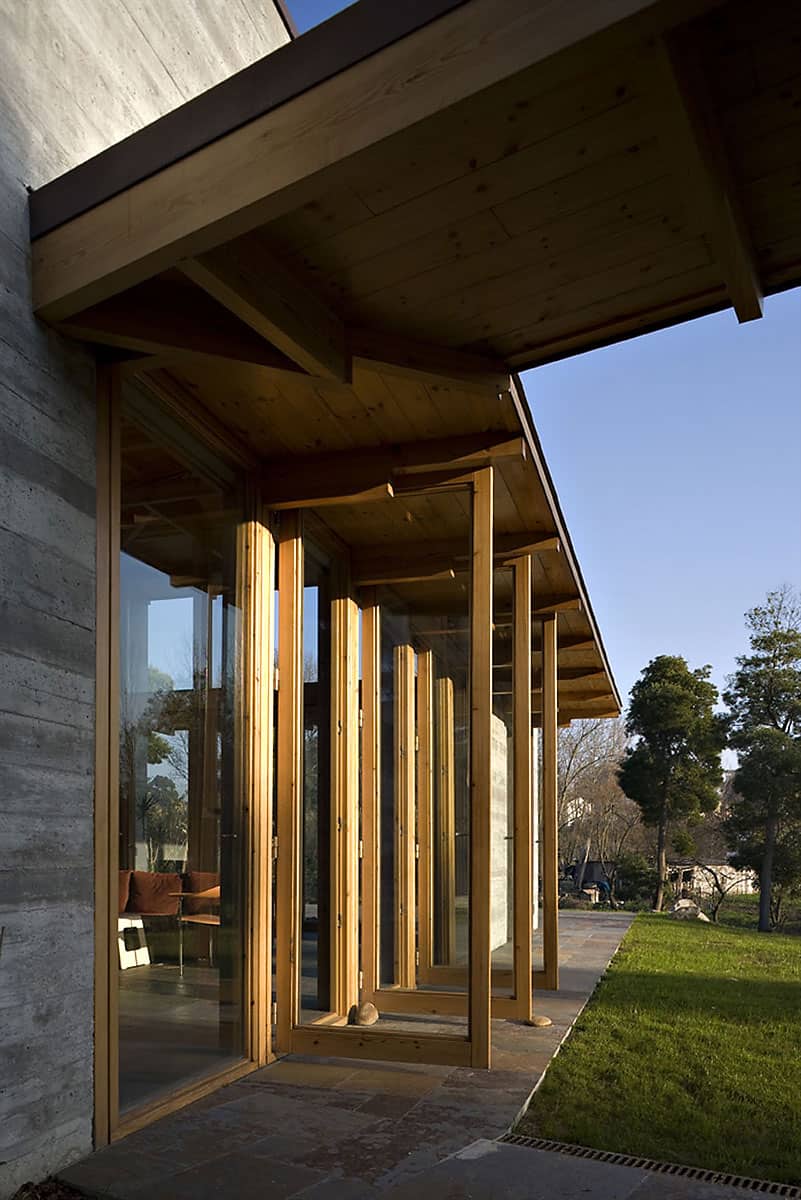 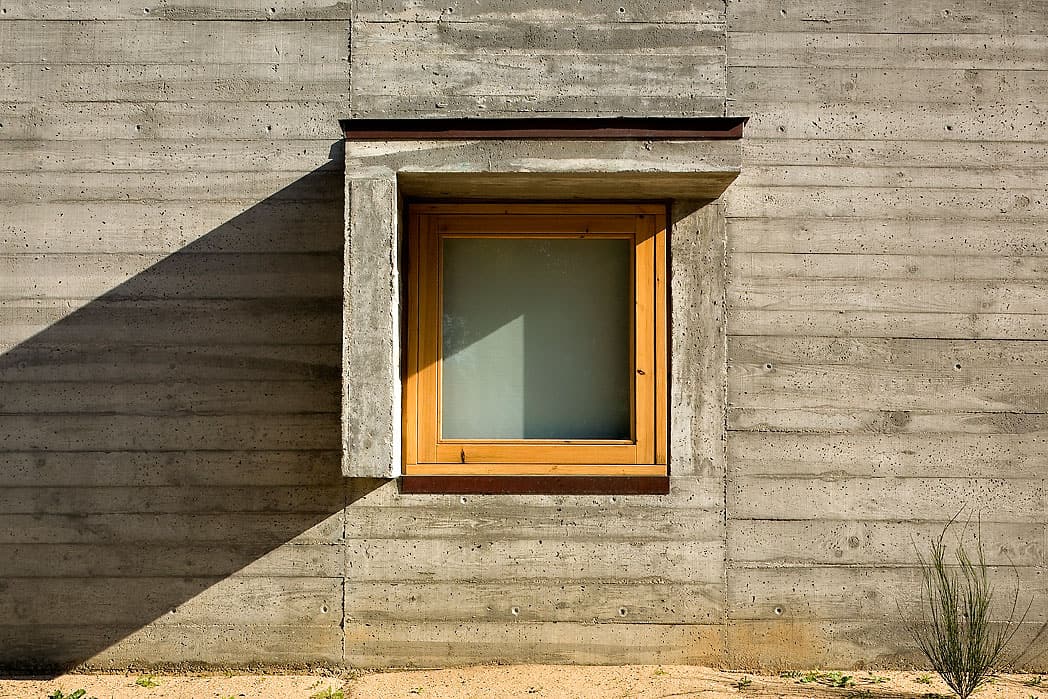 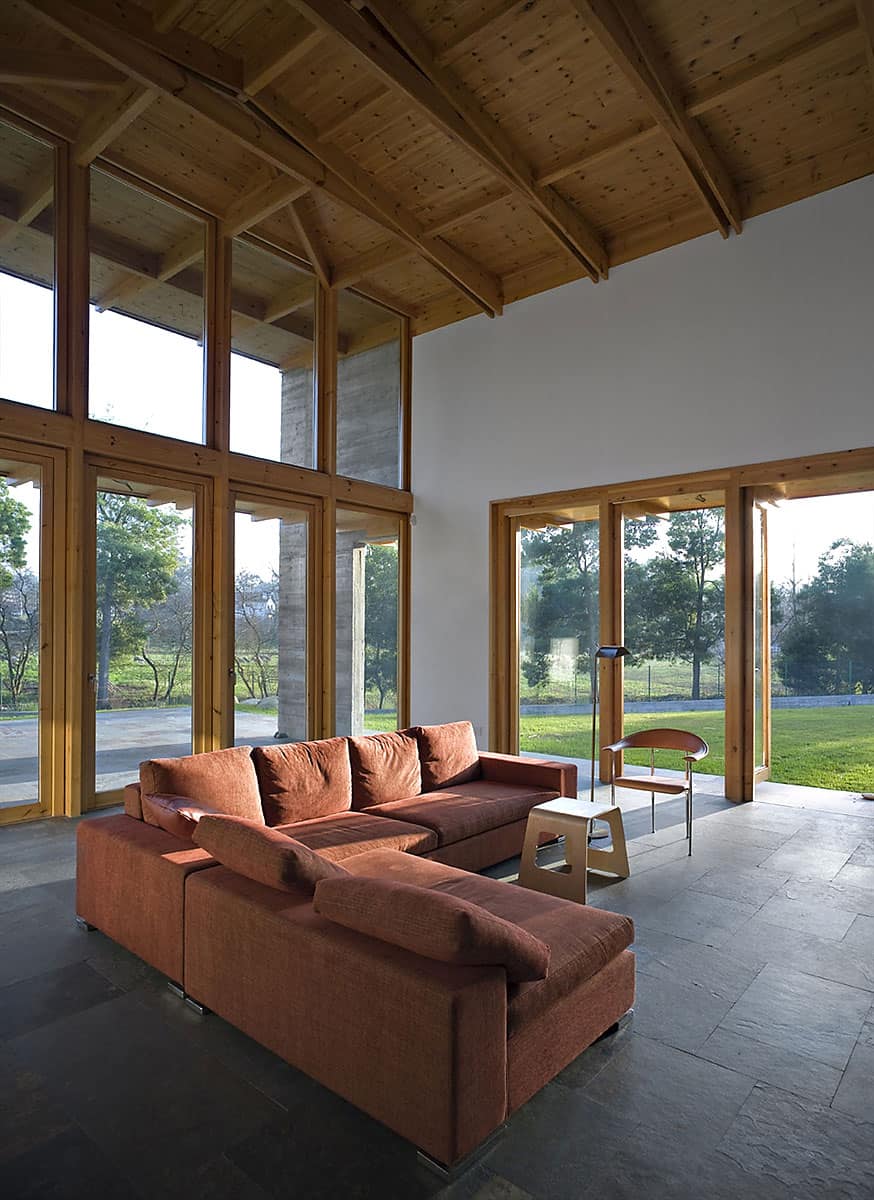 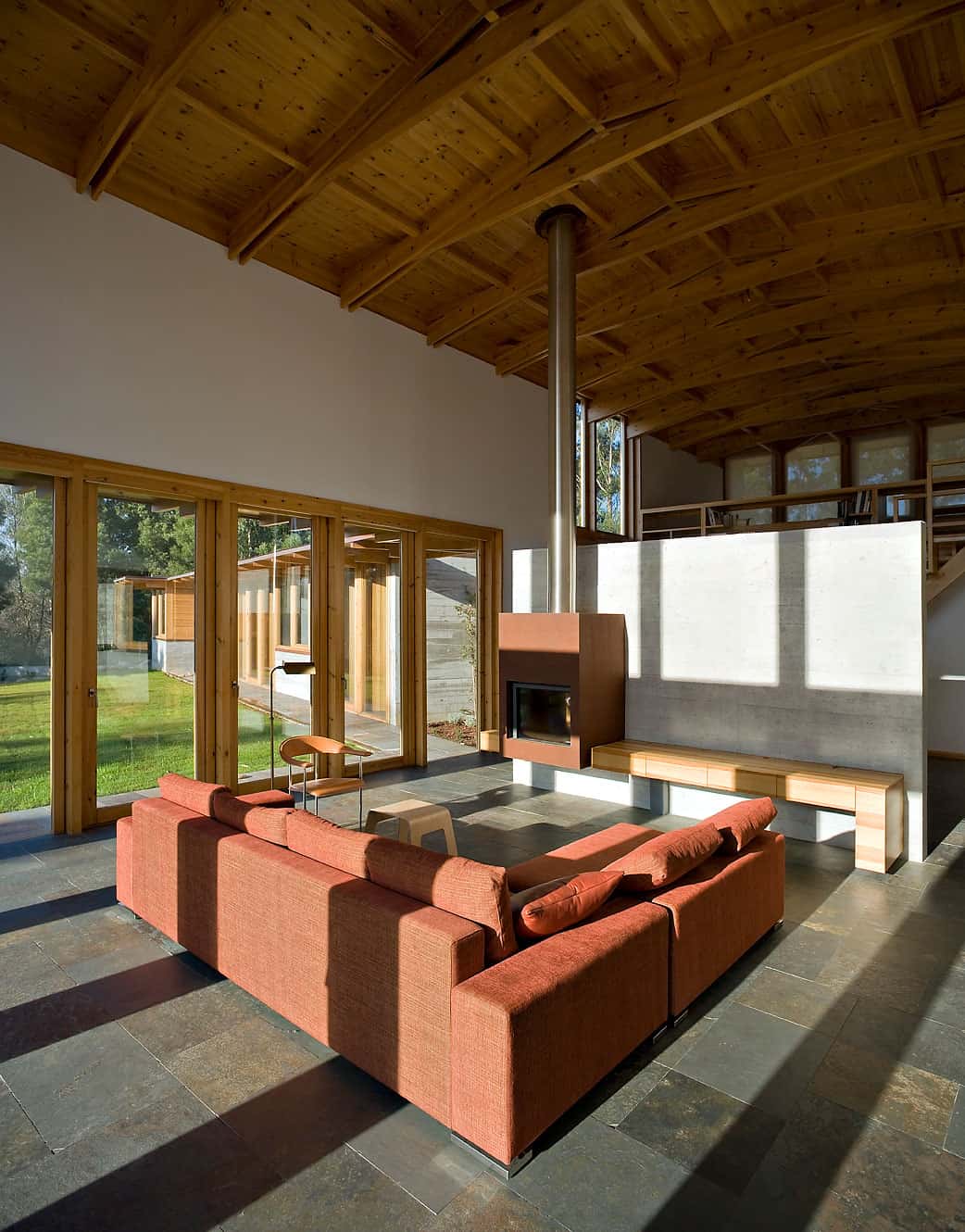 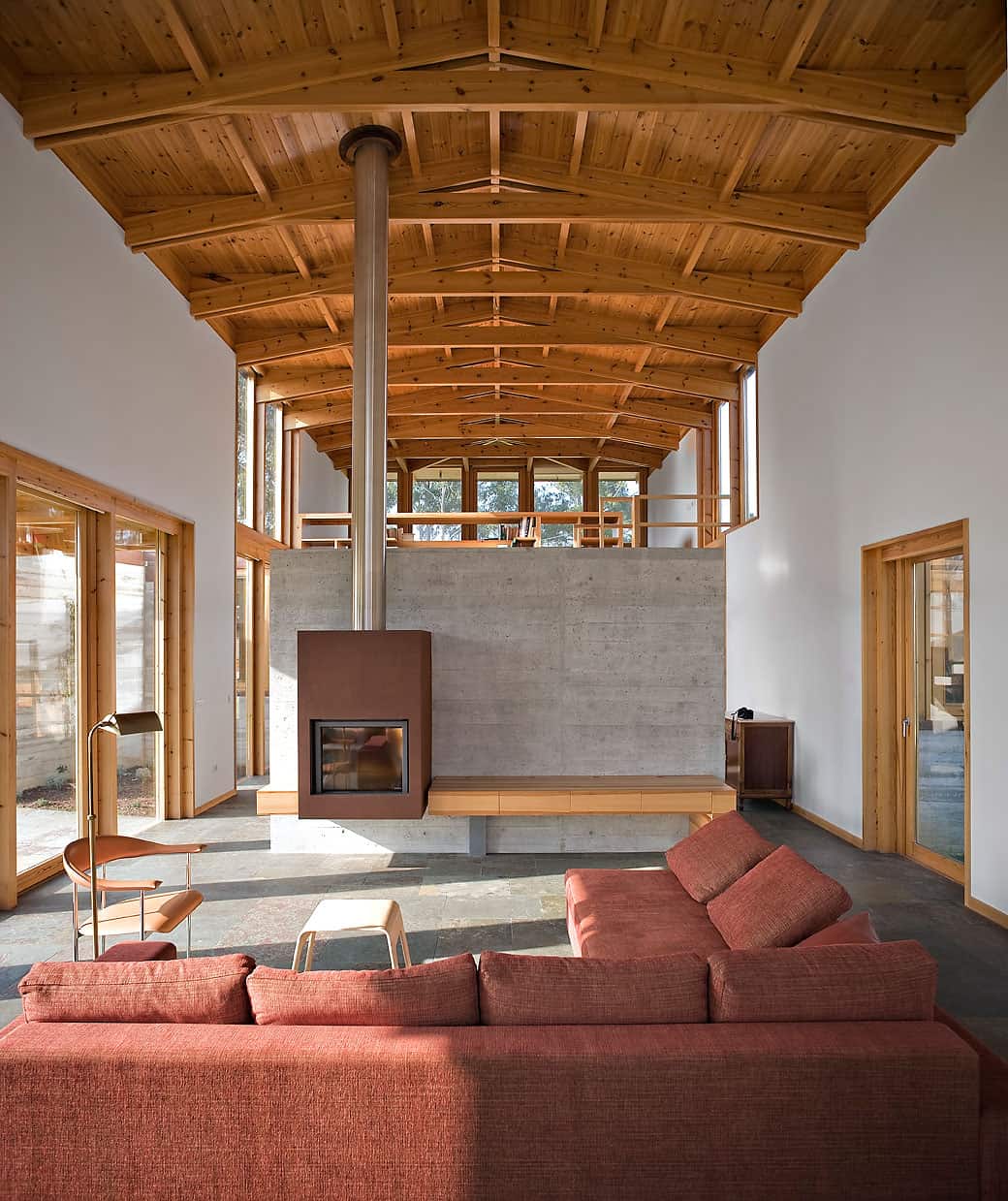 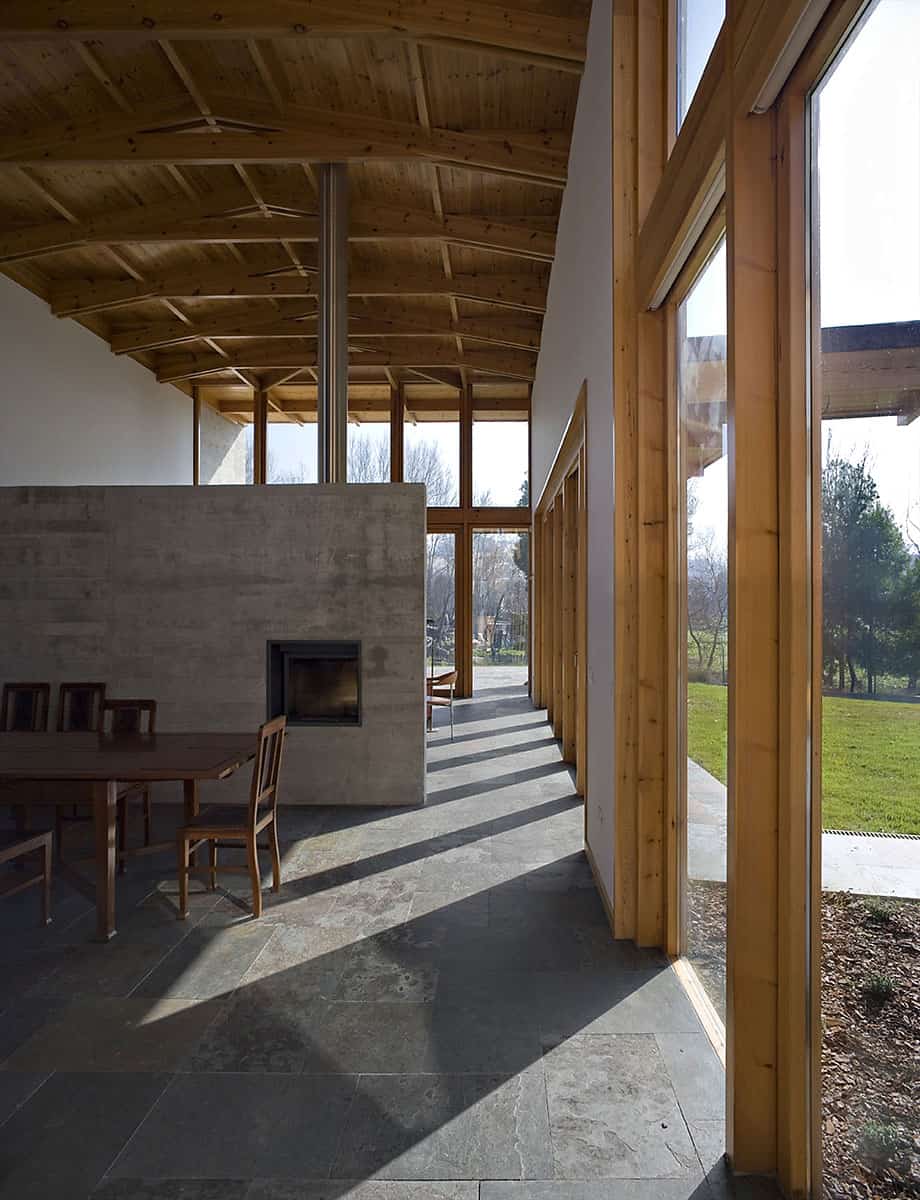 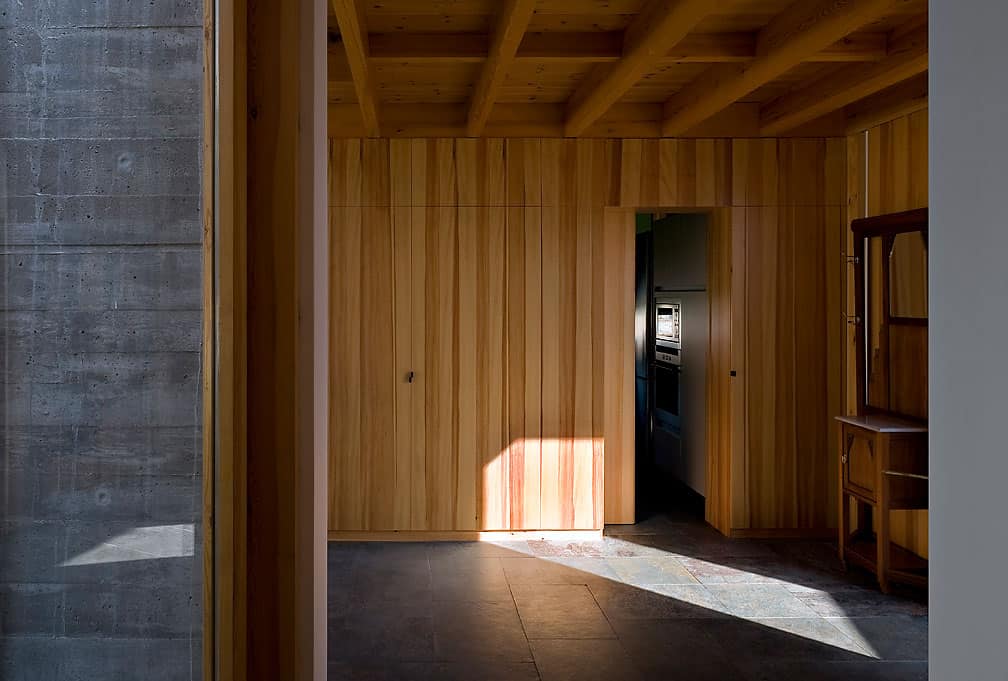 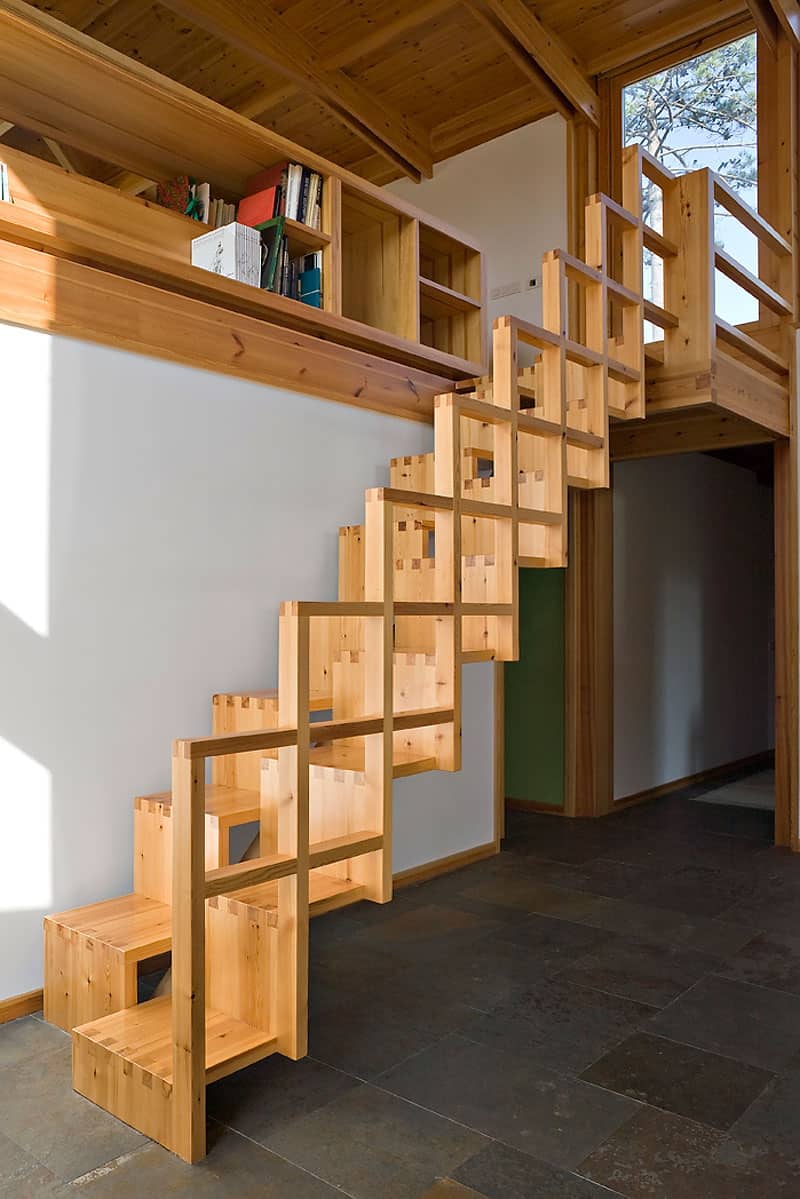 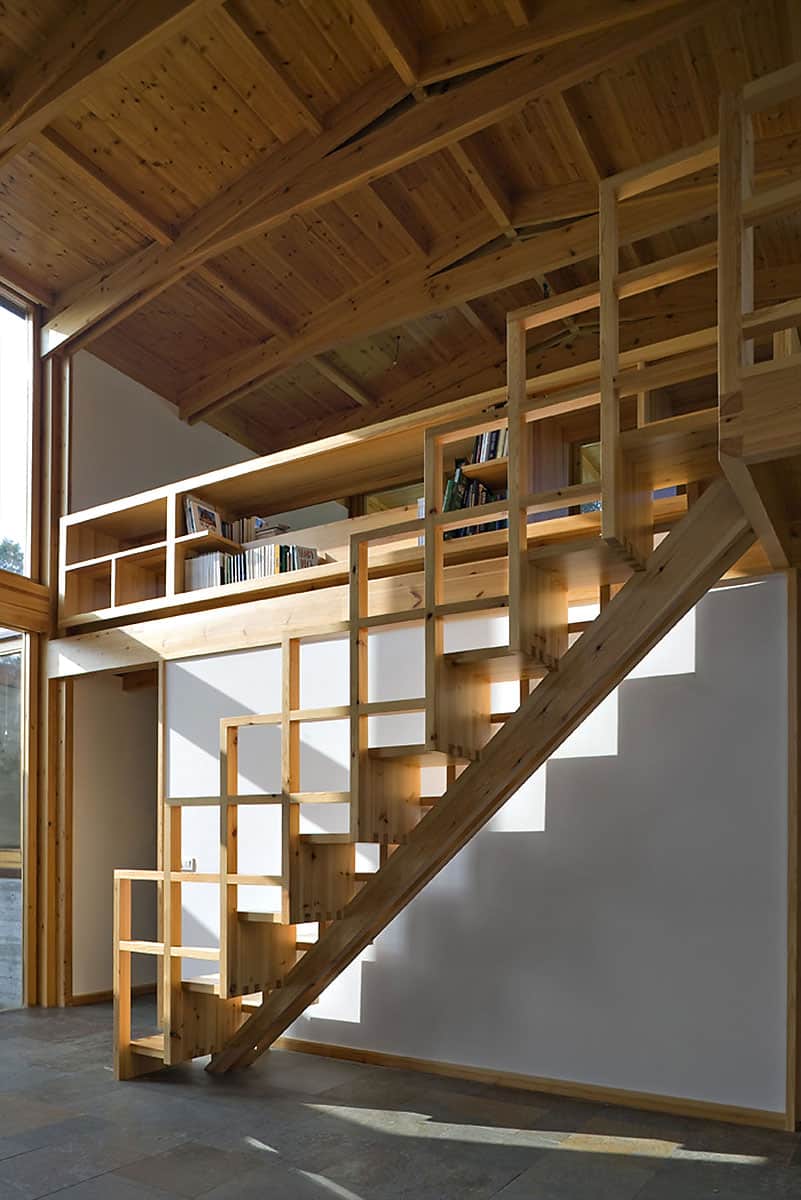 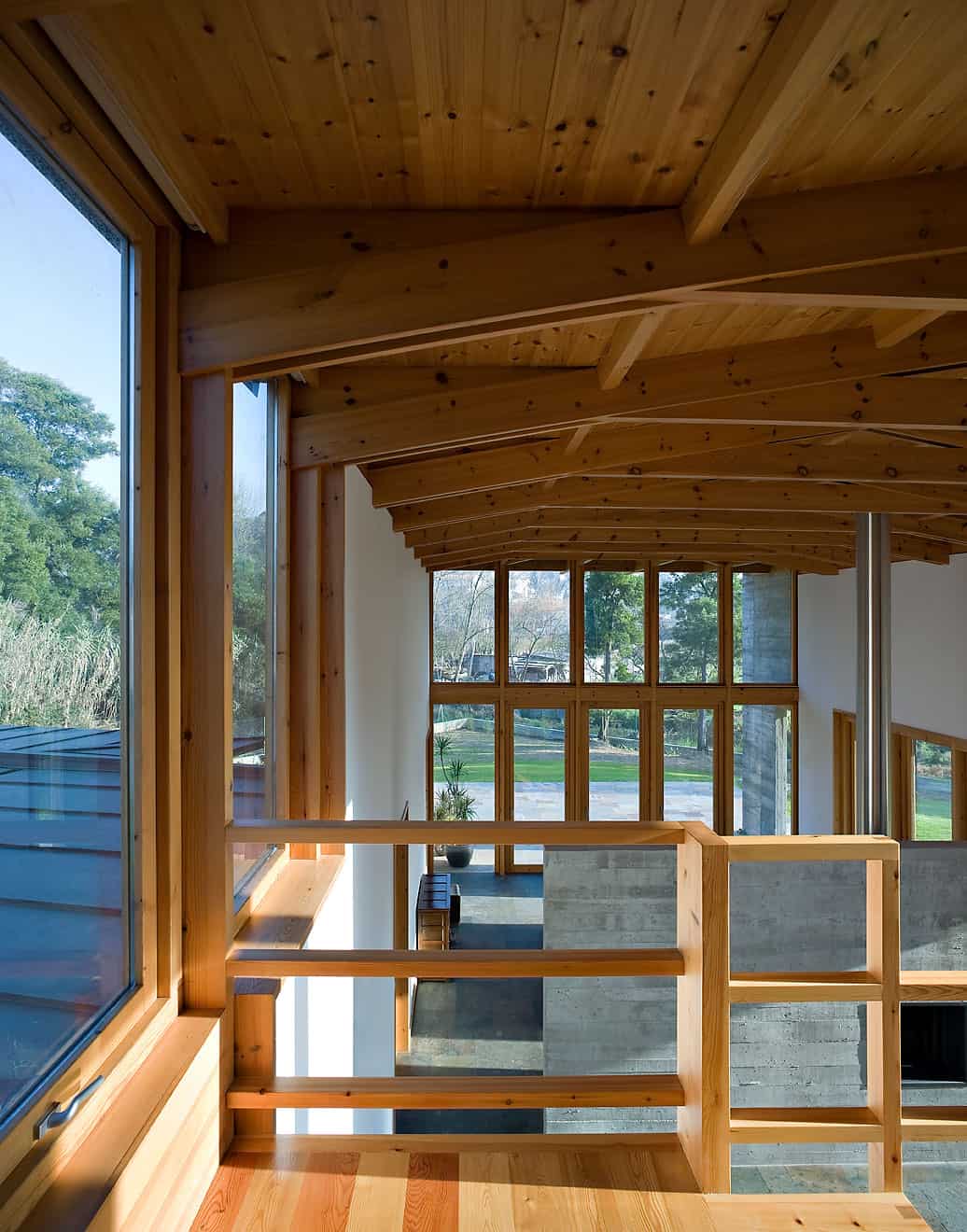 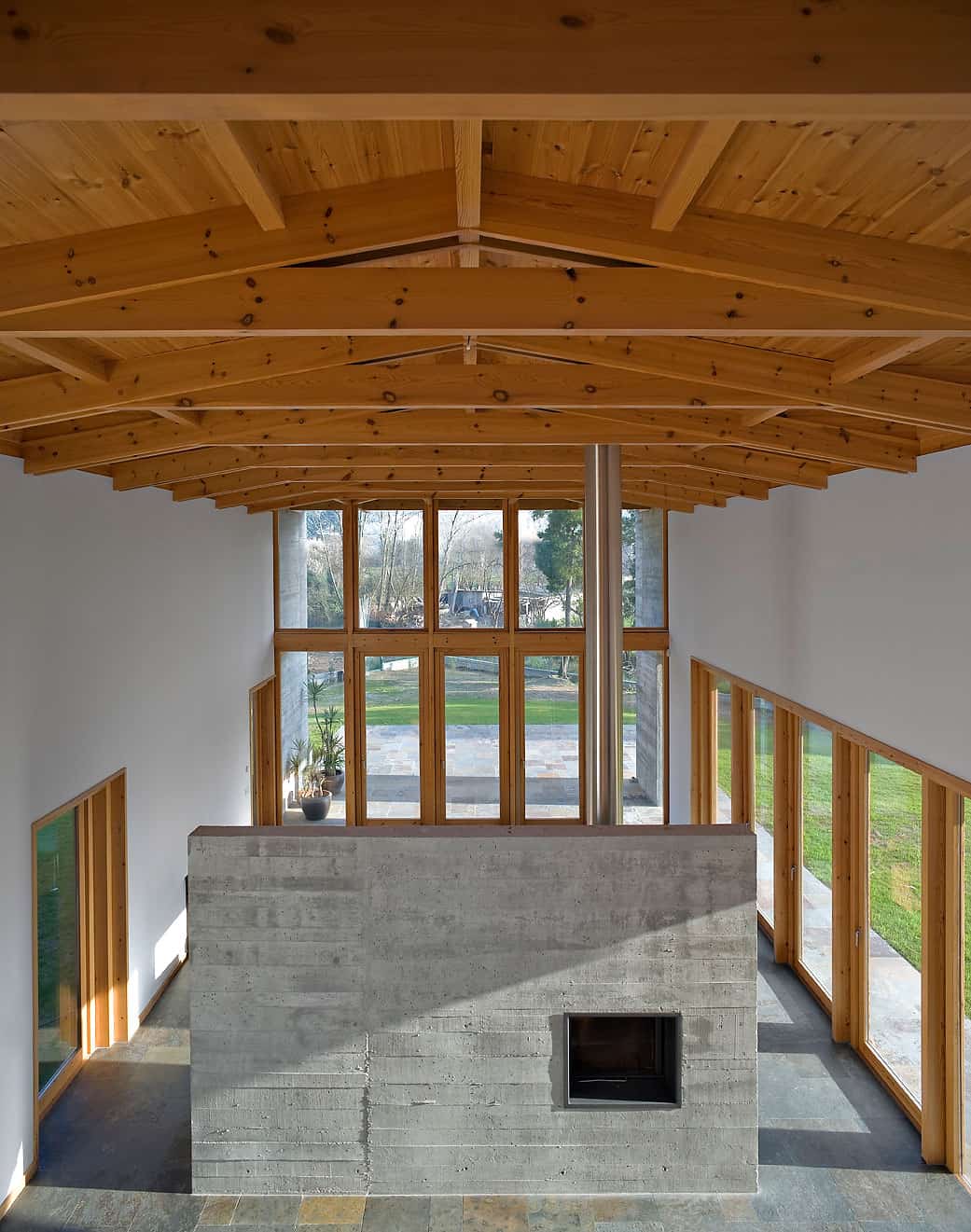 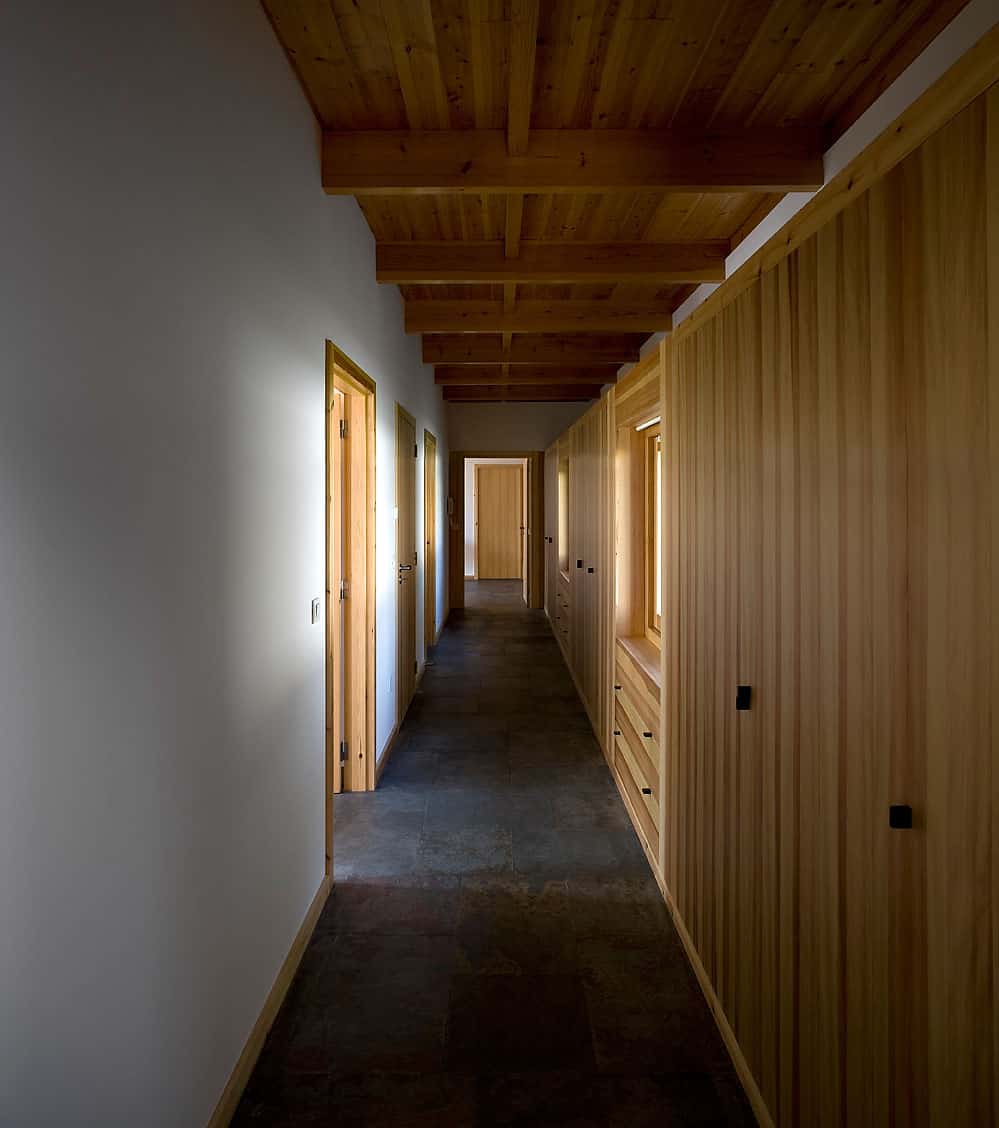 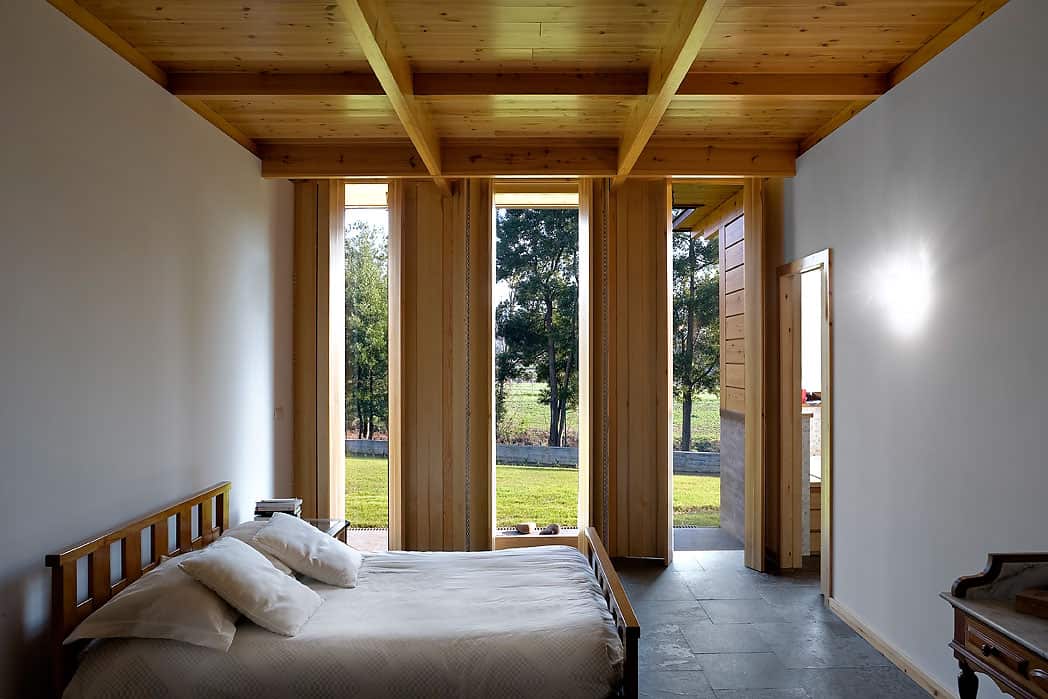 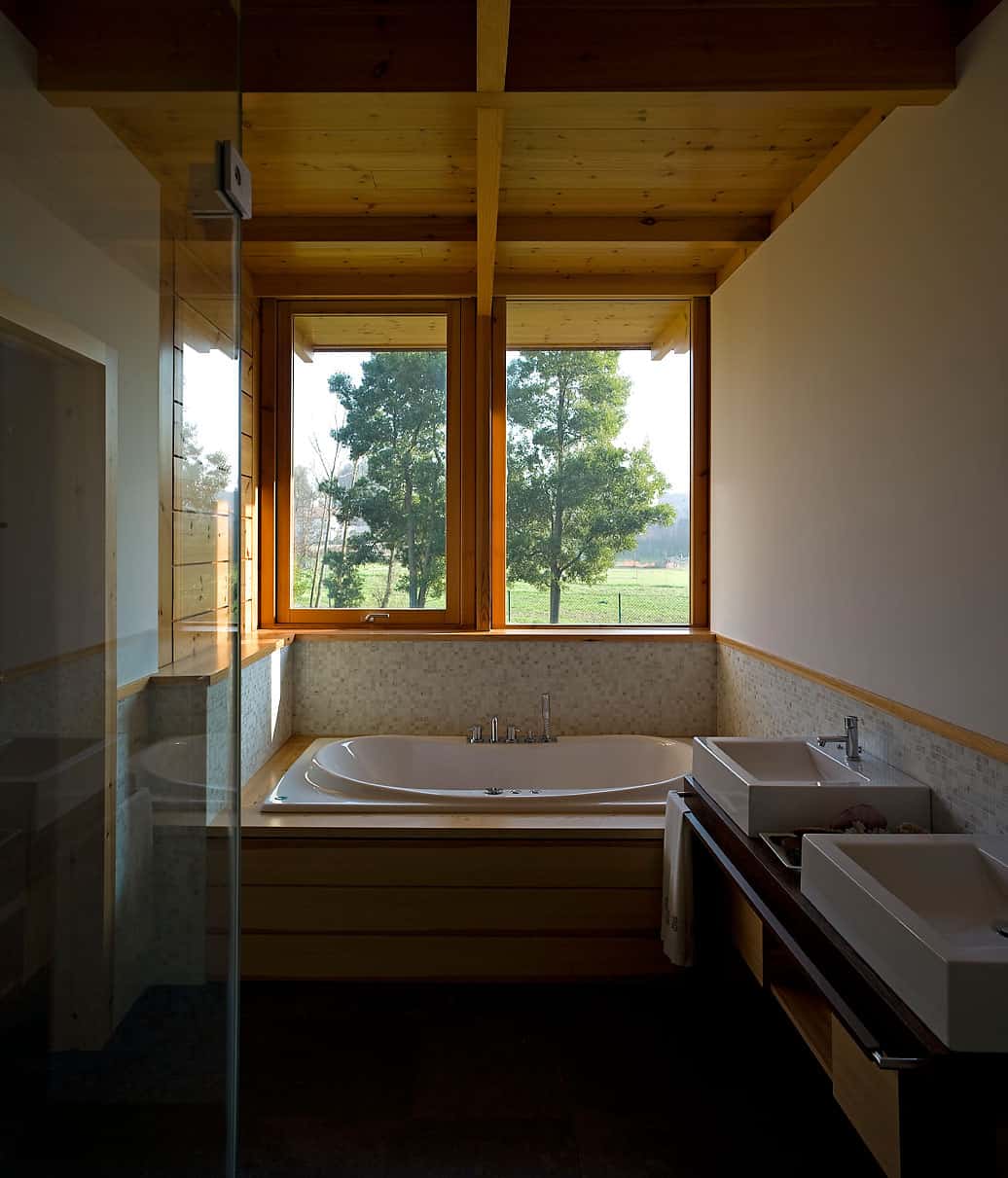 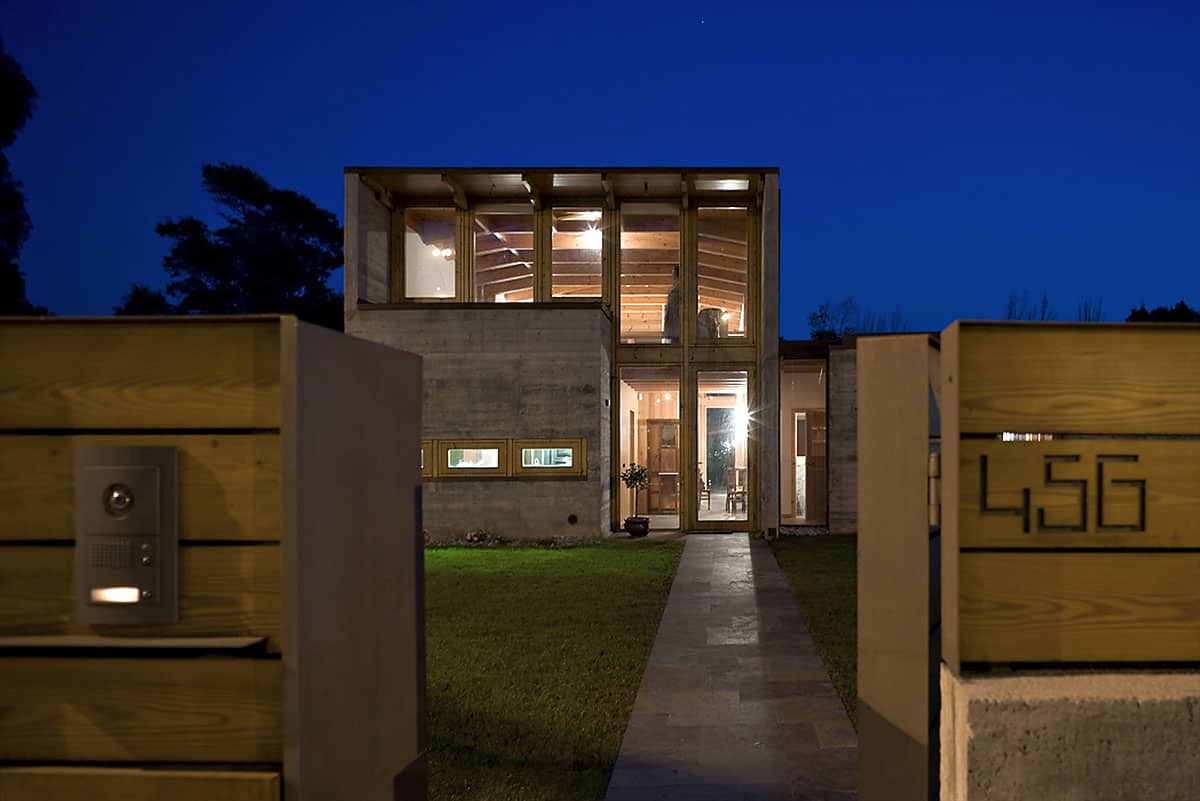 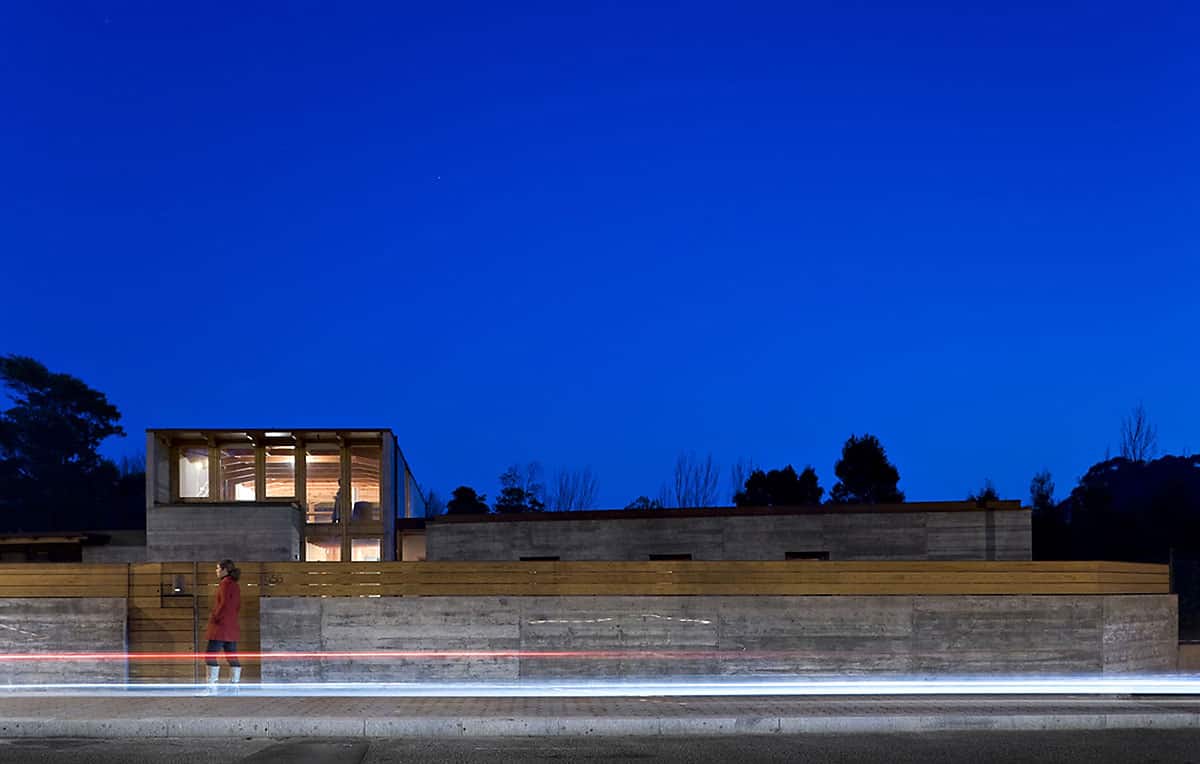 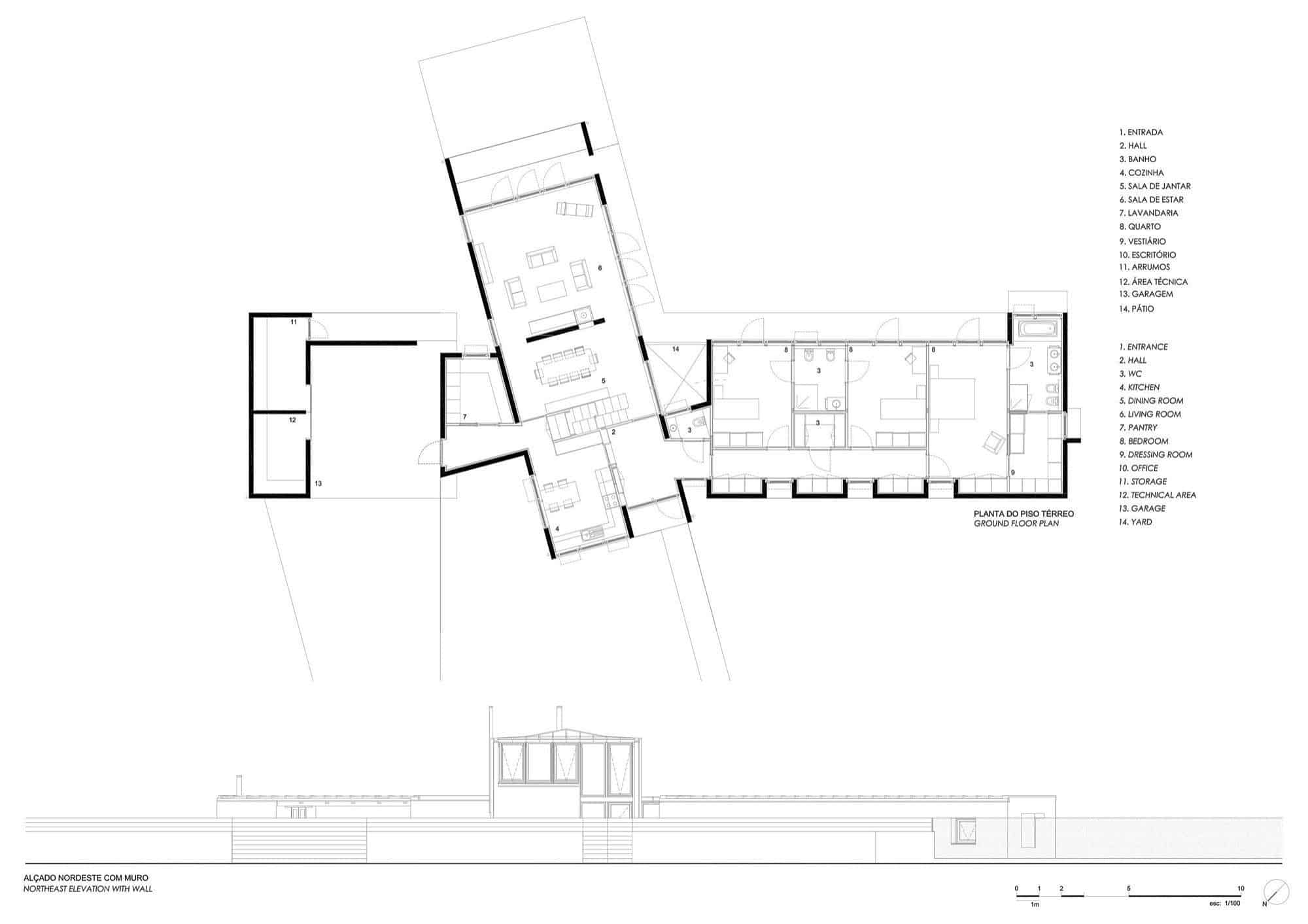 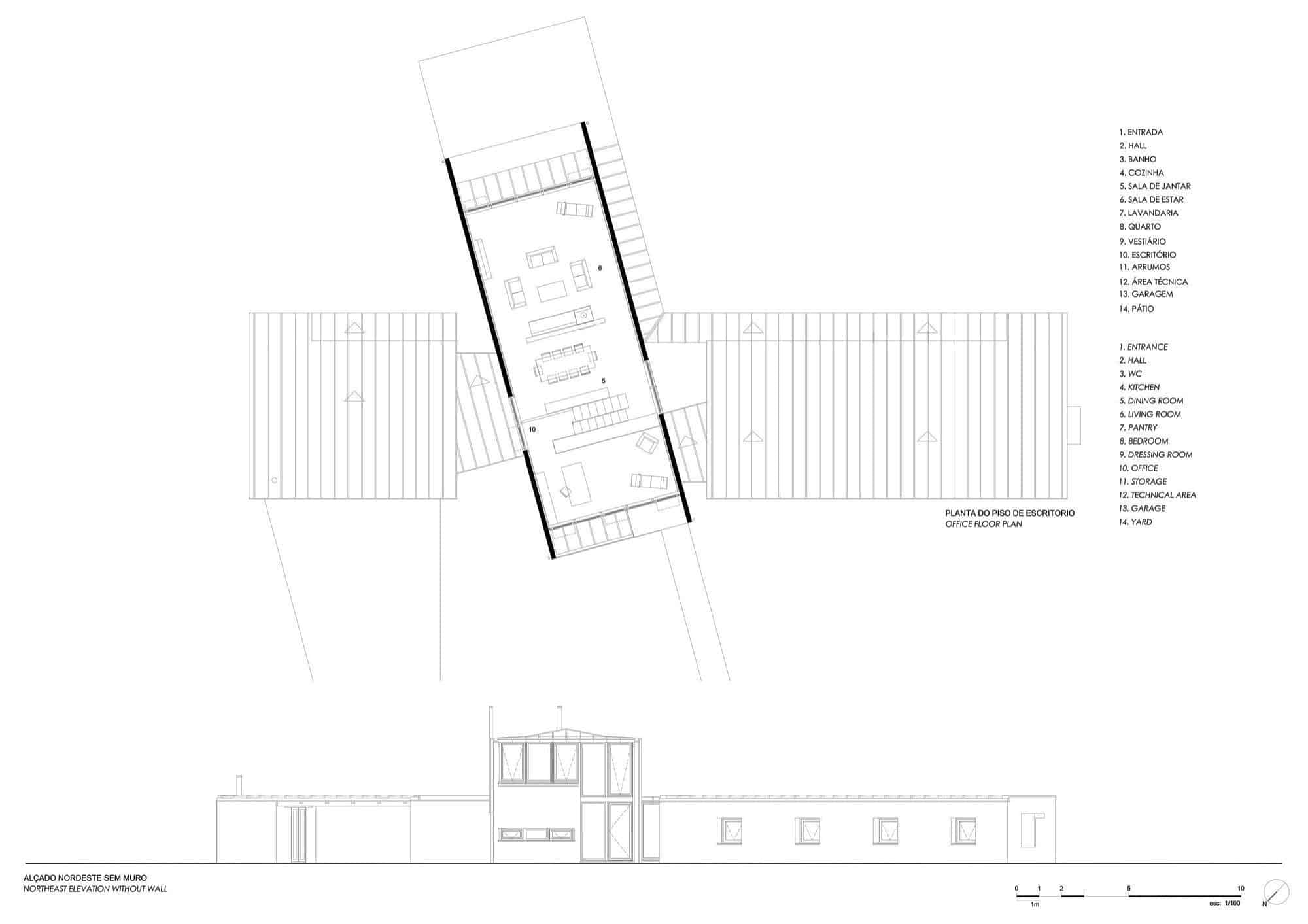 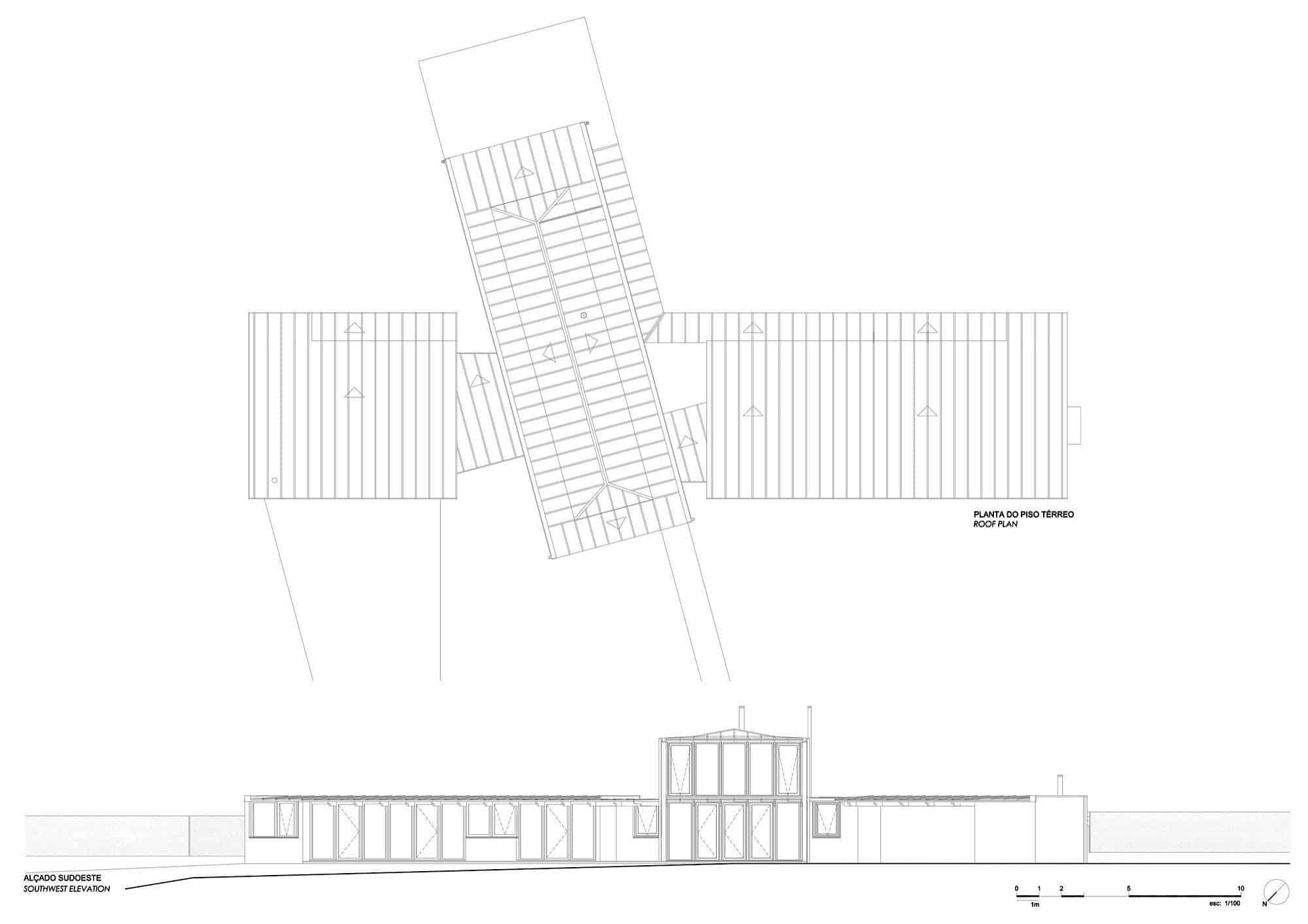 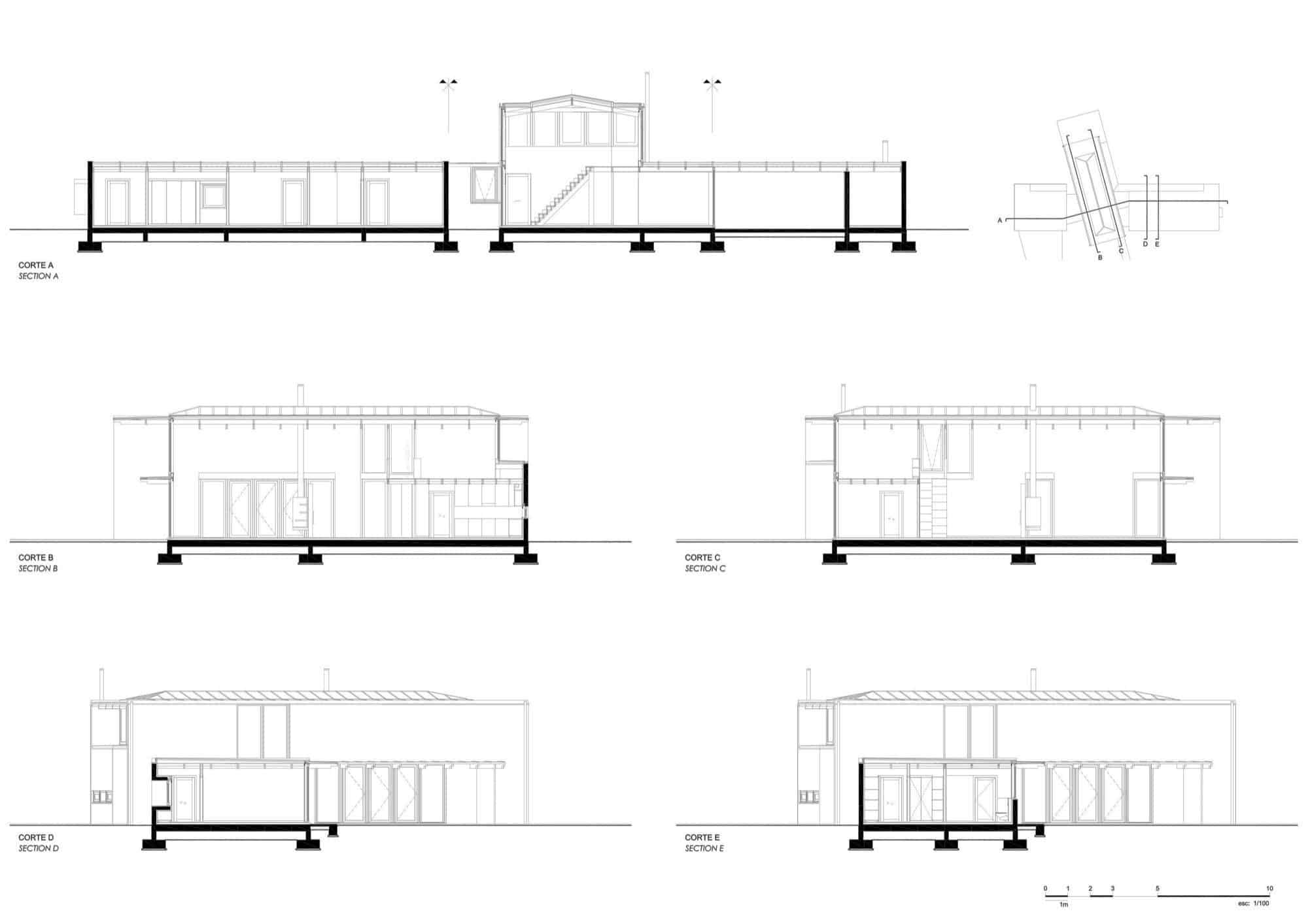 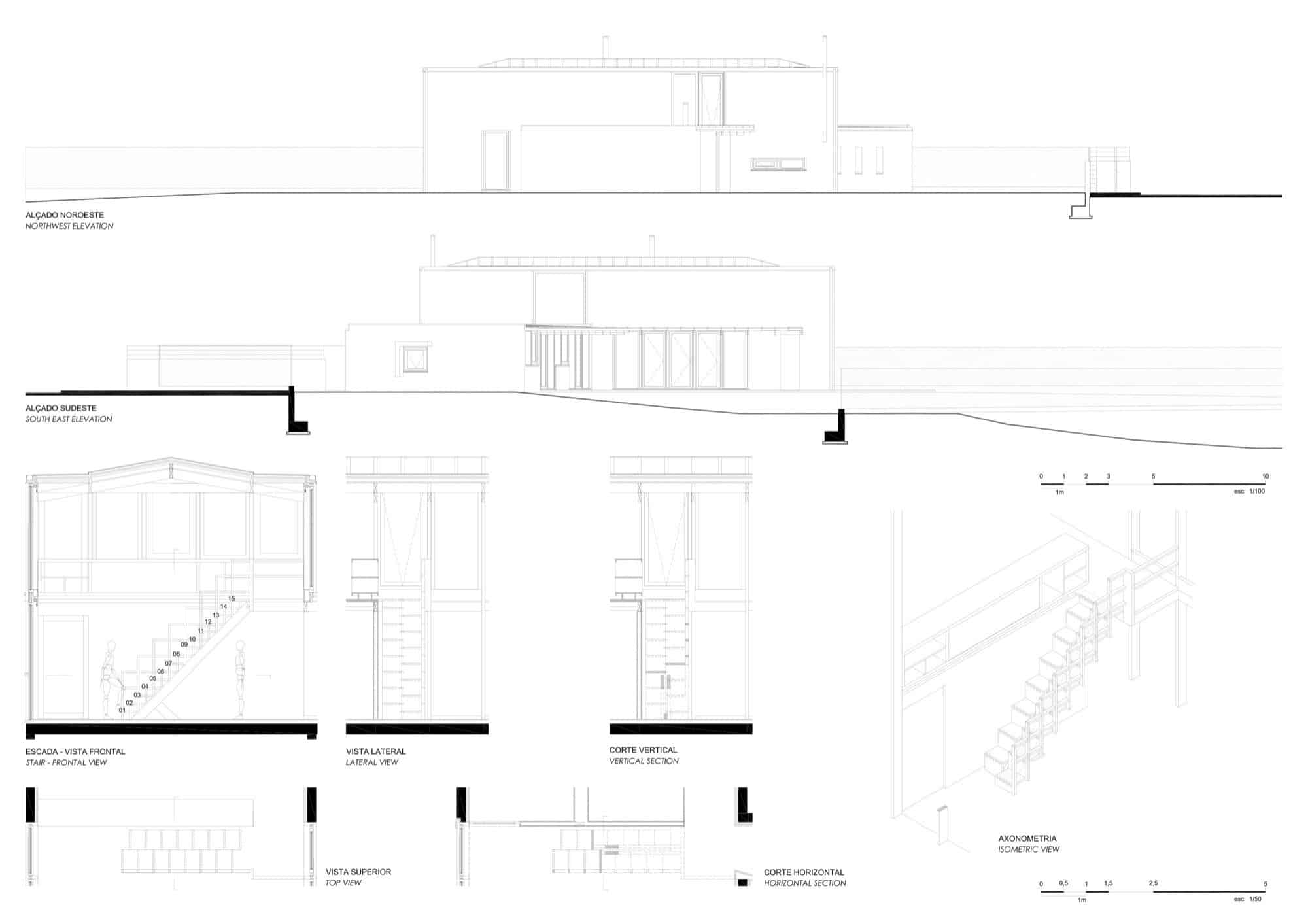 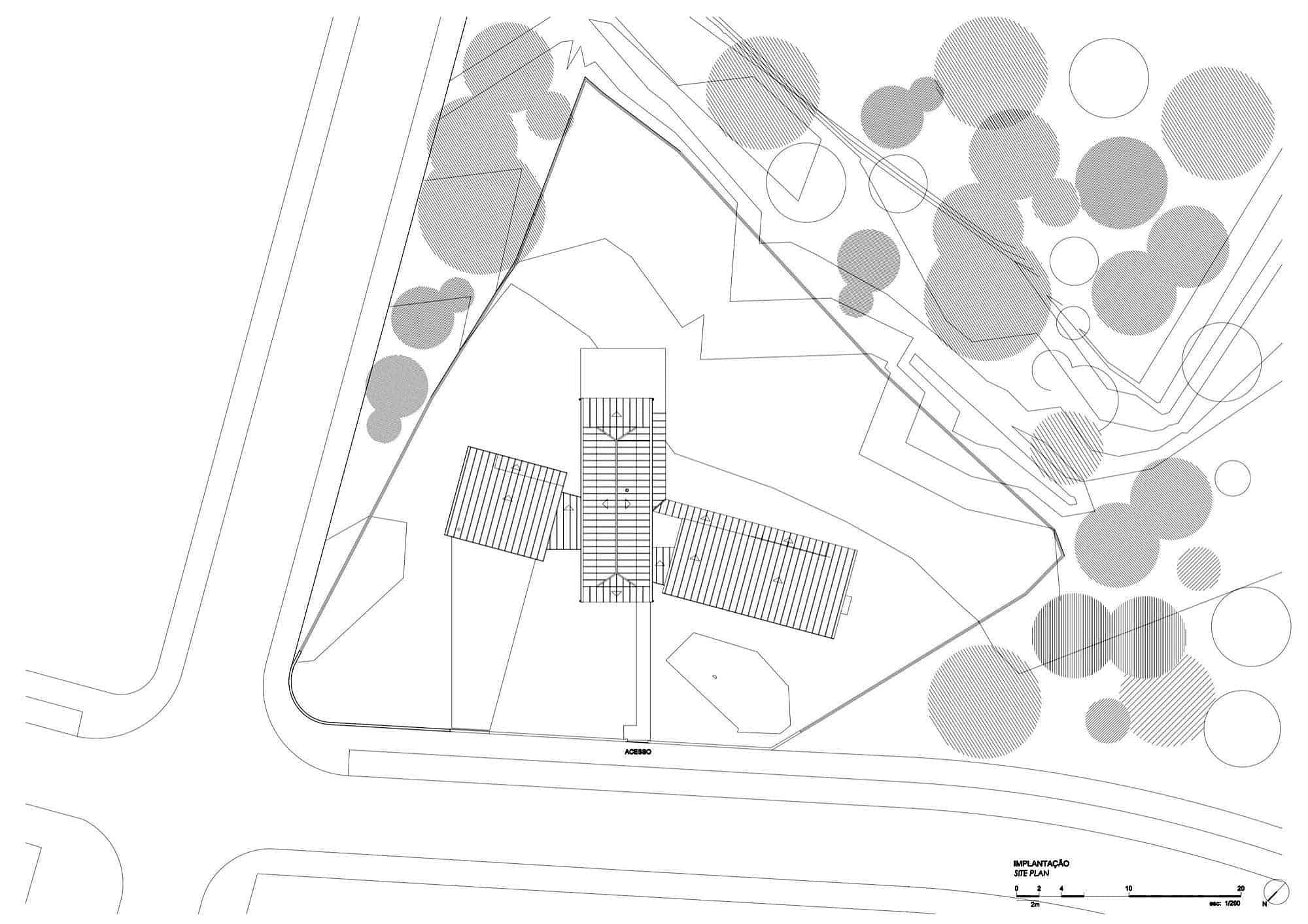 Completed in 2008, this contemporary home is located in Madalena, a Portuguese parish in the municipality of Vila Nova de Gaia, south of the city of Porto, Portugal. 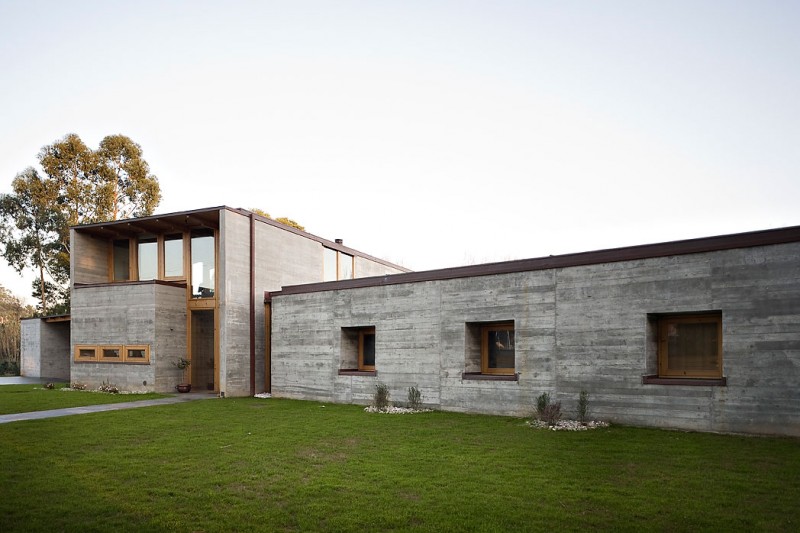 “The area, a place where they are building motorways in order to reduce vehicular traffic from the Atlantic coast of Gaia, is actually zoned as an agricultural reserve. This is its status in the development plan, this is how it is; it is set in law

and will remain so until the law is altered. Agricultural activity is non-existent, except for the small vegetable plots.

The first step taken was to set apart the maximum allowable 300m2 plot for a building.

This was a complex task that required the involvement of various institutions and meetings with numerous participants. An arduous task but not necessarily so. For some people, 200 + 100 equals 300; this forced us to make some corrections to what

had seemed mathematically obvious, because it wasn’t, at least to some people.

As usual, in this country, it was only a question of time, of time wasted. The arithmetic question was resolved and the chance to build secured.

The commission came about as a consequence of having my work published in an architectural magazine.

The brief was given to me in a very clear, well defined manner: a living room, a kitchen, a small study, three bedrooms, a garage and some storage area, good use of external space and privacy.

The Madalena House and the elements of the brief were arranged over three volumes.

The central volume where the social areas are laid out, the volume to the west with the three bedrooms and two bathrooms and the volume, or annexe, to the east, characterized by the covered garage area and the volume of the store and technical

areas.
The brief was to design a single storey house and with the exception of the study, which is located over the kitchen, all the elements of the brief are accommodated on the ground floor.

The central volume predominates in relation to the other two, being a two storey volume expressing the living and dining rooms with their double height ceilings.

The geometrical dissimilarity between the volumes accentuates their differences. The connections between them are made by volumes with similar geometries.

I chose to use rough concrete for the load bearing walls, trying to avoid the super-perfect, technological, Japanese style of concrete that almost ceases to be concrete.

The rest was filled in with timber with glass structures.

A strange method of building, if compared with what is commonly done; something which led to various and curious speculations during the construction period.

With the floor slab cast and the walls erected and insulated, still without a roof or other floors while it waited for the carpenters to start on site, it looked more like a sculpture or installation of some kind. The speculation was that it was to

be a new chapel or some other ill-defined thing which prolific imaginations are capable of coming up with.

No, it was just a house that, with its rough concrete walls, turns its back on the urbanity of the street to the north and opens up to the enjoyment of the garden, the sun, the light and the privacy that the agricultural land still offers.

Inside, the concrete walls give over to white plasterboard and pine from Riga which is used structurally in the ceilings, and again in the window frames, which also act structurally.

The floor is finished in slate both inside and outside to emphasize an intentional continuity.

Roof and weathering generally are in copper sheeting.

The study is the choir of the chapel space that characterises the living room.

Access to it, is via an apparently strange looking and awkward stairs, which turns out to be surprisingly comfortable when used.

This is the always desirable transgression and redress in a world of obtuse and inflexible rules.

The Madalena house is near the Madalena beach, in what is an almost rural setting, for the moment; awaiting the urbanity that ever more pressurizes Vila Nova de Gaia.”