Completed in 2005, this 1,680 squre foot, three story, contemporary home is located on Walhallalaan in Rotterdam, The Netherlands. 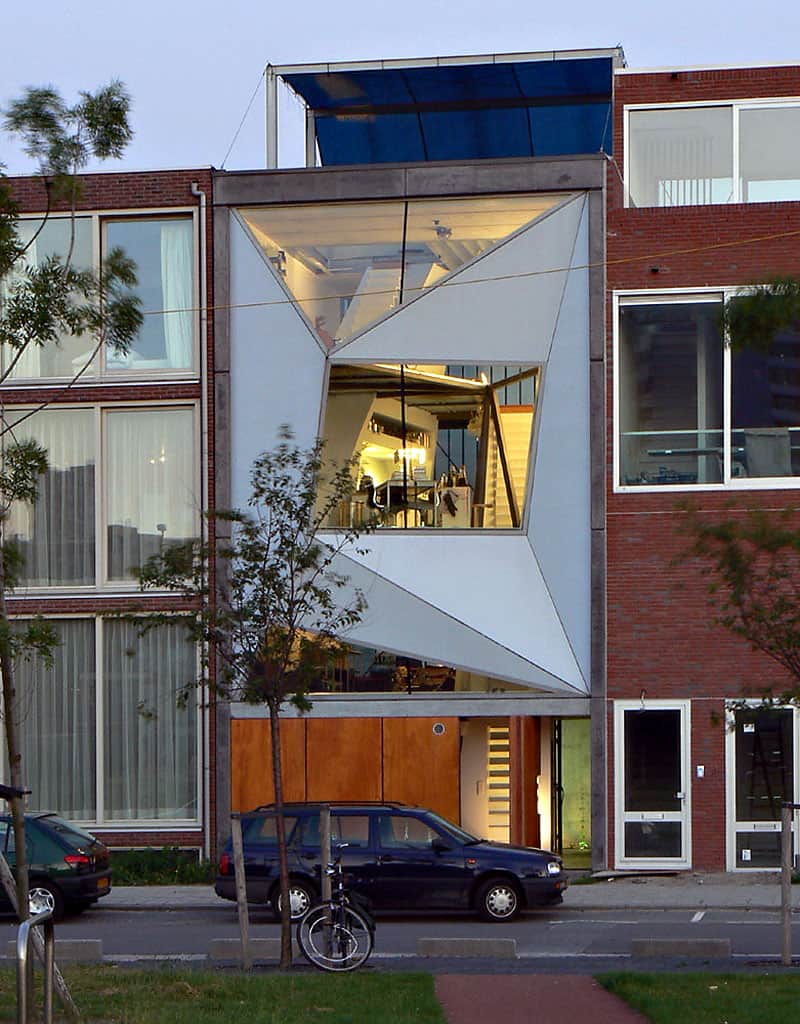 The site of this private house is part of a residential redevelopment in Katendrecht, a harbor pier south of Hotel New York. Until the 1970’s Katendrecht was still completely surrounded by harbors and ships. It was Rotterdam’s China Town and red light district. Currently it is incorporated in the ‘Kop van Zuid’ redevelopment as southern part of the city center.

The house occupies a free plot in one of three rows of seven houses. We occupied a void that existed between the two neighboring houses.

The program was very simple; there was no exhaustive list with spaces and square meters. The clients wished a living area with cooking & dining space at the heart of the house. Sleeping and bathing could function in a more peripheral way. In order to keep the living as empty as possible, we planted all program — except the cooking & dining space — in a plinth. The heart could then hover freely in the void over the plinth.

In the beginning the position of the heart in the exterior envelope was one of isolation. The question was how to connect it to the four exterior sides of the envelope. As we developed a wire frame to carry the heart, the issue became the structural and spatial behavior of this frame. Connections to the outside could be made in different ways.

The wire frame grew during the design process and connected to the plinth and the roof. Since the wire frame contained program it is covered by a skin. It became something like a mass, a body, a caged predator. We shaped it to upgrade the qualities of the void around. It has been cut like a rough diamond to avoid curved expensive surfaces and because blobs are non-critical. The result is a faceted body of which parts are covered with different types of skin: metal grill, glass, particle sheet with epoxy coating and synthetic fabric. The body contains the kitchen/dining space; however it also absorbs functions that in a loose lay-out would disrupt the open character of the living space, like trajectories for cables, pipes and ducts, heating and ventilation systems, the toilets and the bathroom. It takes care of infrastructure and moving patterns by four stairs, partly visible, partly secret and is the connector of plinth, roof and living. The body has made contact with the outside world by four wooden devices: a pivoting facade slab which serves as the entry with the letters ‘use’ of ‘body house’, a flipping door towards the patio, a tilting plank towards the terrace on top of the patio and a shifting plateau to the roof.

The body attaches itself in the big facade opening at the front and deforms itself towards the panoramic view of the river. The front facade is facetted like an insect’s eye and is pulled in and pushed out by the body. Three facets were glazed, the one below directed onto the context (the park), the one in the center focusing westward onto the river and the upper one spreading out to frame the ever changing Rotterdam skyline with its concentrations of Dutch ‘high rises’.

The intestines of the body are important. Apart from its Ethernet connection with brain center, the ventilation unit acts as a lung, breathing inside. A tentacle connected itself to the entry facade to inhale fresh air via the second letter ‘O’ of Body House letters on the front facade.

The PLINTH is the base in cast concrete. It is a kind of lifted foundation or ‘ground floor basement’. It gets special lighting from the patio in the back: during daytime sunlight filters down through steel grills on top of the patio (1st floor), at night artificial light beams up from under the steel grill patio floor at ground level. The patio is an assemblage of scaled up prefab concrete elements, placed within an hour.

A steel CAGE is placed on top of the plinth. It consists of a series of portals and determines the box shape of the living. The BODY is completely prefabricated, transported in parts and assembled at site. A crane lifted the whole into the center of the house, where it rested on helper steel that also stabilized the side walls of the house during construction. The body stabilizes the complete house. It holds part of the concrete floor with its foot and is connected to the roof beams with its top. It even occupies and stabilizes the front facade while pulling the facade in and pushing it out, directing the big window towards the panoramic river view. The only part not controlled by the body is in the back, where a steel X stabilizes the rear facade. The body frame has a deliberate structural non-logic. It is not calculated to save steel, it has no repetition but is shaped to guarantee the absorption of program and the quality of the surrounding living space: structure follows spatial quality. The body is facetted to simplify interior finishes. The kitchen/dining floor is made of 8-mm steel sheet, heated by a floor heating of copper pipes, warming up the body skin. The wireframe consists of steel tubes with square sections and variable wall thickness. The welded nodes, designed to look simple, are deconstructed: the heart lines of the structural members are not meeting in single points. The TENT on the roof is made of four vertical steel profiles supported by steel wires from the four corners of the roof. All faces of this volume can be covered in many combinations with a nylon fabric tent in three parts, each of which consists of three removable sub parts.

The Body House is an urban stack of three small projects. Below and on top are two extremely opposite housing concepts. Below is the fixed, interiorized, dark, heavy, robust, concrete plinth. On top is the roof terrace as ‘campsite’ with a free, open, light, flexible, flimsy, nylon tent. In-between is the big living space with the body, a volume inside a second envelope, a concept that normally is to be found in big buildings.

The Body House was built on a very low budget. This was feasible because of accurate 3D-design, precise preparation and use of prefabricated elements. The exterior and body were built in five months. Unfortunately the city administration of Rotterdam, that managed the building process of the private houses at Parkkwartier Katendrecht, caused a delay of approximately 1.5 year. Due to inflation on the price of materials this delay increased the building costs. As a result, the owners of the house are managed the interior, supervised by Monolab.”