Utrecht-based interior designer Remy Meijers has transformed the interior of this 1950’s bungalow located in Baambrugge, a town on the Angstel stream in the province of Utrecht, Netherlands. 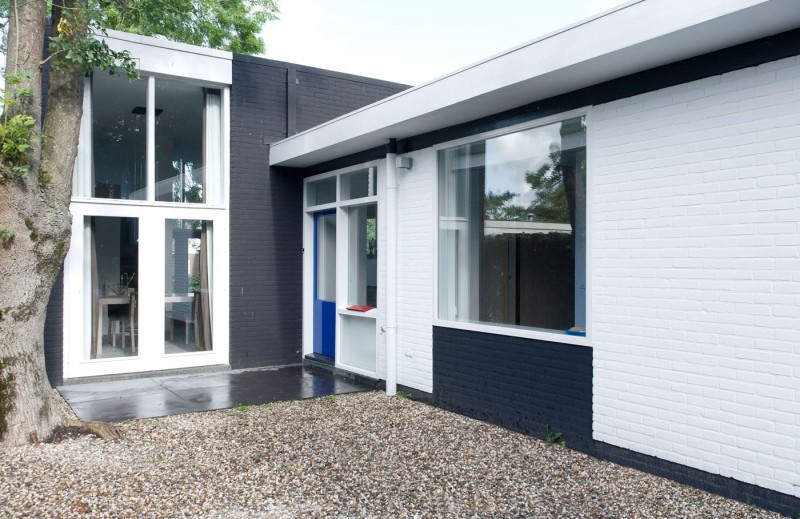 “The Dutch interior designer Remy Meijers viewed it as a challenge to transform a double bungalow, designed by the famous architect Gerrit Rietveld and situated in the village of Baambrugge, into a suitable family home.

That wasn’t easy, due to the layout of the two adjoining bungalows: dating from 1958 and offering just 250 square meters of living space, they were not built to house a modern-day family of five. Even the extension in the seventies, added by the renowned architect Benno Premsela, had not solved that problem.

Meijers elected to leave the architectonic value of the property untouched, as a result of which the front of the house still exudes a 1950’s feel. Behind this facade the two bungalows have been knocked into one. Large windows heave been created at the front of the house, both in the kitchen and the study, allowing daylight to flood deep into the modernistic interior.

Working with the existing layout, functions have been switched around so that the rear facade, for example, is now acting as the front facade. One striking change is the introduction of an oak-covered wall uni, which not only connects the living spaces together but also houses the meter cupboard, the toilet and the kitchen appliances.”

Mansion in The Hague by Remy Meijers

Apartment on the River Ij by Remy Meijers

Apartment on the River Vecht by Remy Meijers

Magnificent Remodeling and Extension of a Californian Bungalow

Bungalow Style Homes You Must See