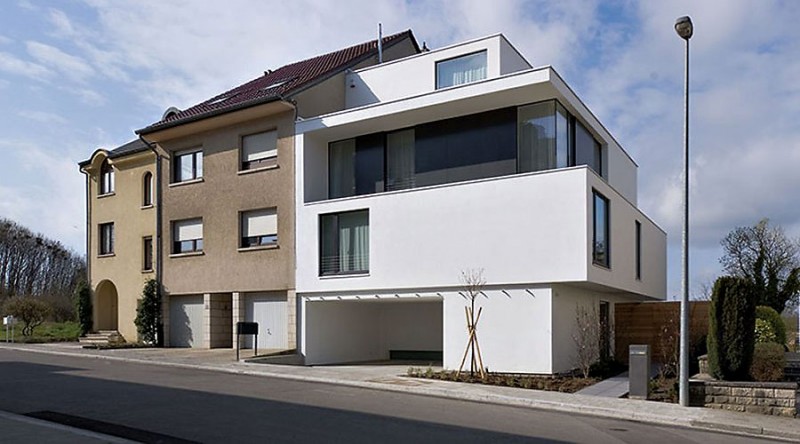 “This single-family house with three facades and five bedrooms is the result of an optimization of areas and volume of living space according to the town-planning specifications in this housing district of Luxembourg City dominated by inter-connected houses.

This lead to a complex massing characterized by cantilevers and large recesses acting as generators of the architectural form. Displayed as white volumes extended by strong horizontal and vertical lines, the composition appears very geometric, while drawing an elegant flowing from the ground to the roof top. Very expressive, the cornice becomes the element of integration to the architectural typology of the street and the neighboring houses.

These lines and volumes are more than parts of the facade conception. The 3-dimensional composition as well as the repartition of the voids and masses invite the eyes to wander all over the building comprehended as the whole.

In the same way, the different internal spaces overlap: i.e. between circulation and living spaces, or between the different levels. The double height of the dining room connects the living areas of the ground floor to the study in the mezzanine and the parental suite on the first floor.

These facade and indoor interactions are completed by outdoor connections with the green spaces – terrace, garden and pool – thanks to large span glass openings.

An outside courtyard on the ground floor, laid out between the dining room and the living room, generates a very strong inter-penetration between inside and outside: the garden with its swimming pool and the wooden decks get into the house!

The space of the house itself and the noblest living spaces are changing according to seasons and ways of life.

Once again it is the drawings of the lines and the white volumes that confer coherence to these complex and mixed areas of the house and its garden.

A special attention should be paid the principles of low energy construction that could be integrated to this complex and daring volumetric composition, which optimizes the openings to the south and west, and favors a more massive composition to the north and east , while giving a today’s coherent and relevant impression.”

Ground and above Roof House by SpaceSpace