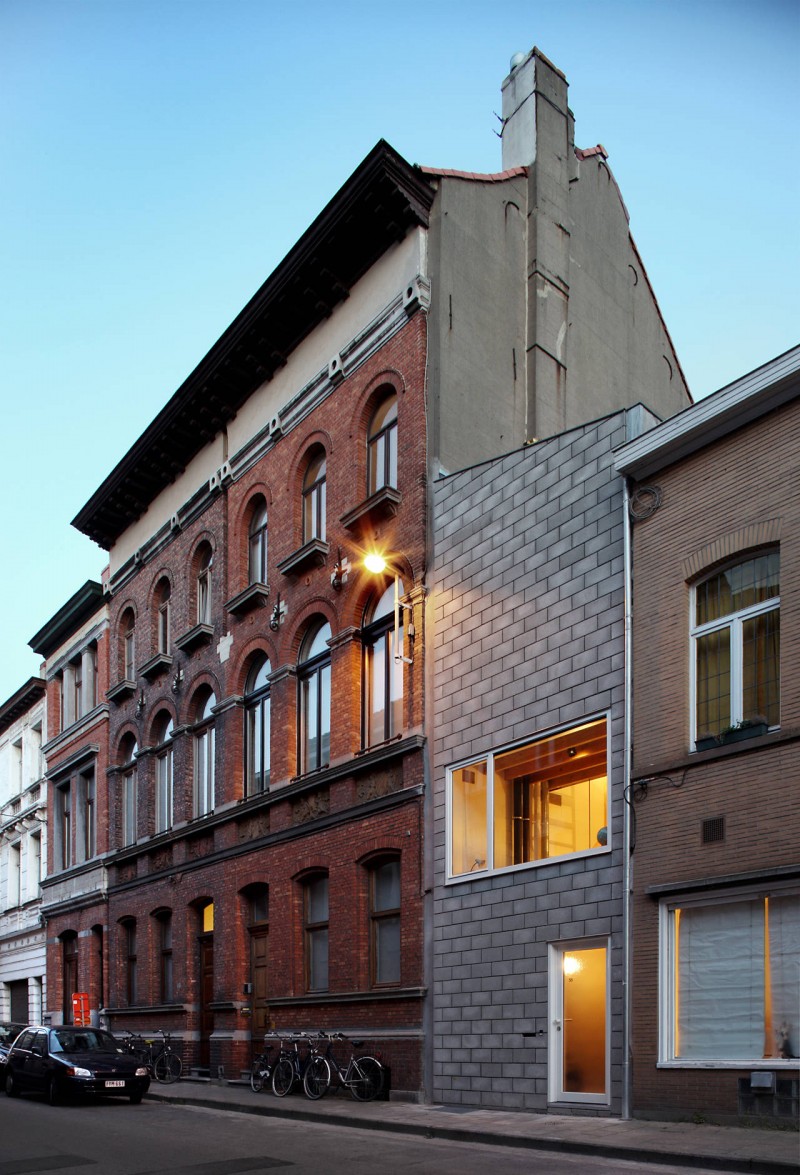 “Terraced House 12K
The first steps taken by the architect and the client start with the search of a suitable building site. Under the architect’s advice, two neighboring houses were purchased, which exceeded the budget of the client. However, this allowed them to redefine the plot boundary and construct a new house on one of the two plots. During the construction of the house, the client could continue living in the adjoining house before selling it.

Program / Site
The program includes the construction of a small house, for a limited budget in the center of the city of Ghent. The site is a narrow and deep plot, where three floors can be realized.

Concept
Given the limited width of the site, the design was developed within the section. By seeing the house as a sequence of three elements/parts with varying heights, different conditions could be realized. The first two parts consist of three floors which are connected by a central staircase. The stairs serve the different levels that vary in floor height. This creates different perspectives and a continuity of space. A skylight over the entire surface of the stairwell allows natural light to penetrate deep into the house.

Construction
One enters the house trough an area with a low ceiling, that is primarily used as a vestibule/storage between the street and living space. The dining room and kitchen in the second part of the house have a substantial ceiling height, creating a visual relationship with the office space above the entrance hall. This space is a home office in-between the street and the living space. In the extended area of the dining room and kitchen, is the living room. Using an identical skylight as in the stairwell, natural light extends into the center of the living room.

The split level staircase serves the bathroom above the office space, and two rooms above the dining area . By extending the height of the second part of the house within the allowed urban regulations, it was possible to realize a mezzanine in the upper bedroom on the second floor, and thus achieving maximum use of the floor space. During the construction of the house, the client decided to add a garden shed to the program. This became the fourth and final element in the back of the building plot.

Roof
This terraced house is situated in a conservation area of the city and is served with a number of planning rules to answer to. In consultation with the urban design services, there was opted for a sloped roof parallel to the street. This principle was applied to all four elements of the house.

Materialization
The concept of the succession of the four parts are drawn in the use of materials and detailing. The bare structure is considered as finishing and expresses the concept. The house consists of two longitudinal walls of painted brick.The rooms are divided by transverse walls erected in concrete blocks. There is no distinction between materials for the exterior and interior shell. The exterior facades and interior walls are in the same concrete block, where the same block window principle is also used.” 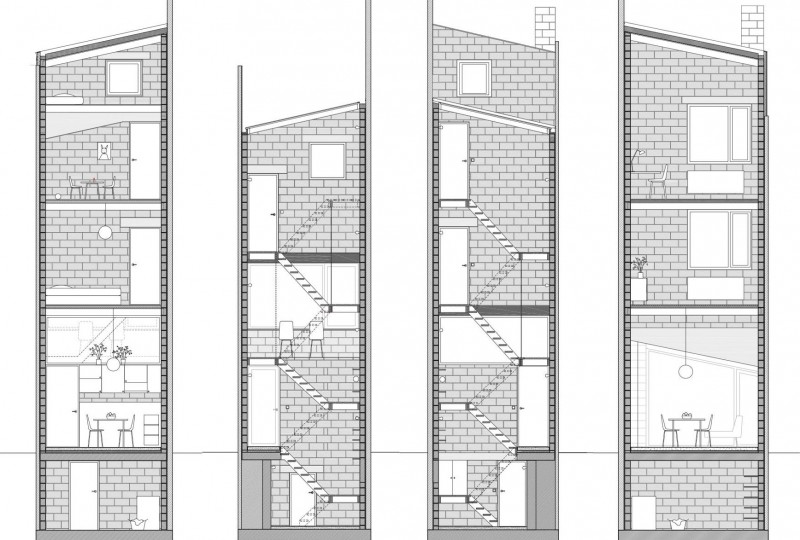 Beachaus I by Pb Elemental

Apartment in Saint Petersburg by GEOMETRIUM