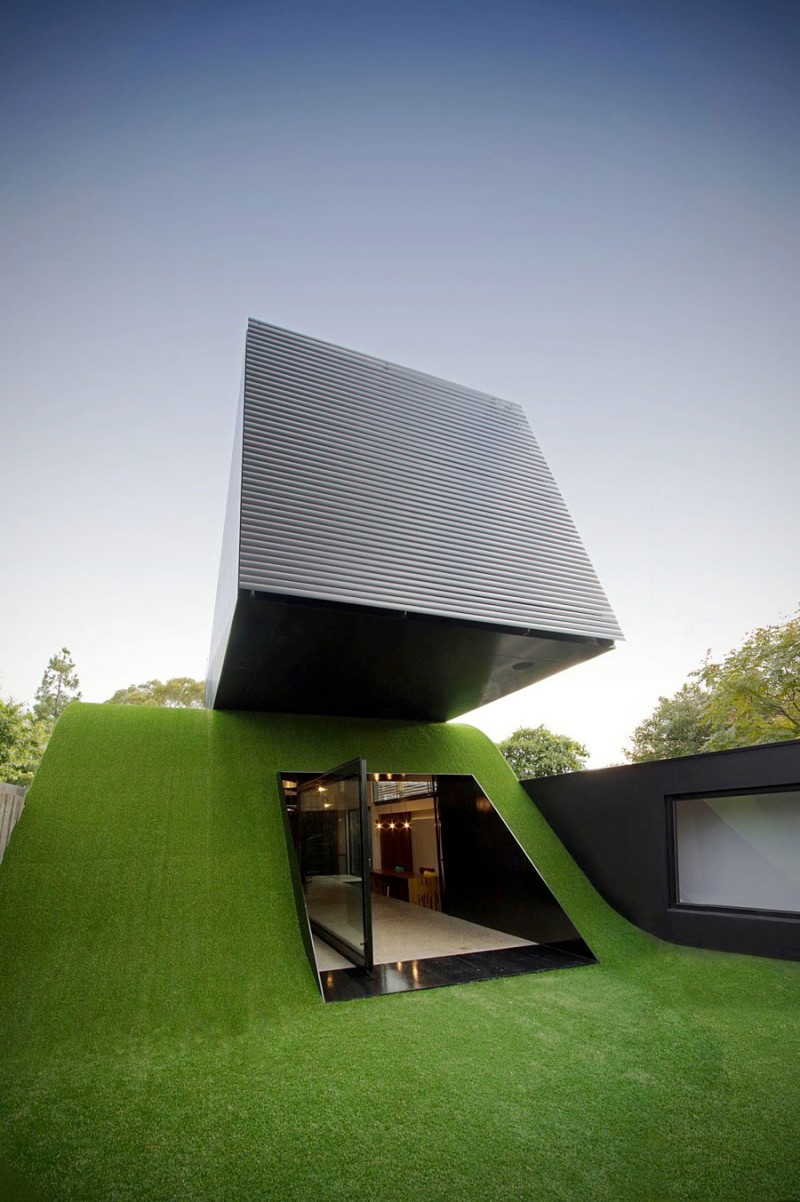 Design is complex. There is little that is more complex to design than a home, however fundamental issues offer an architect a starting point; where is the sun? How do we capture it in winter, how do we exclude it in summer? The thin allotments that dominate Melbourne’s northern suburbs often provide indomitable constraints to solar access and therefore require the production of unorthodox ideas to overcome these constraints and convert them into opportunities.

The site faces north therefore relegating the backyard, the family’s primary outdoor space, to shadow throughout the year. In the 90s a two storey extension was added reducing solar access even further while creating deep dark space within the house. A family of five wished to create a long-term home, which could meet the requirements of three small children and their slow transformation into young adults over the years.

Rather than repeating past mistakes and extending from the rear in a new configuration, the proposal was to build a new structure on the rear boundary, the southern edge of the block, upon the footprint of what had been, until now, the back yard. The new structure faces the sun, the pure cantilevered box above acts as the passive solar eave, cutting out summer sun, while letting winter sun flood in.

Following the decision to build at the rear of the block a ubiquitous modern box was first imagined. Soon it seemed necessary to pursue the opportunity to activate this new, once shaded, now sunny facade. A seat along the new northern facade? Perhaps a series of steps like the Scalinata della Trinità dei Monti? But how does one lounge in the sun on steps. Perhaps a slope instead …. And the hill house evolved/emerged.

The new structure faces the original house. The backyard is now the centre of the house activated by the built form around it. Beyond solar gain, the benefit of the new structure being in the backyard is that it borrows landscaping from its neighbours’ gardens. The high windows about the entertainment cabinetry and the dining area are enveloped in trees. Internally one gets the sense that Hill House is enveloped by bush rather than part of the suburban mix.

Along one boundary a 2m high fence was created, but unlike most houses the Hill House has a one metre wide fence; a corridor lowered into the site to achieve head height. This in turn creates a lowered dining area. One rises into the living space. The change in floor level creates a bench seat for the Maynard designed ZERO WASTE TABLE.

Front Street no longer provides the main entry to the home. Family now enters via the side lane. The original house, now private dormitory spaces, no longer has a typical relationship to the N#@$%k street’s “front” door. The original house, as with most narrow blocks throughout Melbourne, demanded that visitors walked a long corridor past bedrooms to the living area. Stolen quick glances into dark private spaces always occurred along the journey. At the Hill House the entry is reorientated. The kitchen, the nerve centre, the hub of the house, is the new greeting point. Beyond is the park. Adjacent is the living space, the yard and the “kids’ house” beyond.

The old house is converted into “the kids’ house”. The old house is as it once was. The rear of the simple masonry structure, though spatially connected, is not reoriented, a face is deliberately not applied. It is left honest and robust. With a restrained piece of “street art” to be applied.

Andrew is from Tasmania, a place dominated by its landscape. Built form is secondary and subservient to landscape. Melbourne is predominantly flat. Could this be why Melbourne’s architecture is adventurous? There is no landscape to confine therefore building is free to become landscape. Hill House is a response to this possibility. Melbourne is flat. If one is to explore the possibility of cantilevering off a cliff (a desire of many architects) one is forced to manufacture that landscape. A monolithic form is unsheathed from the hill and placed atop. A celebration of the synthetic, the manufactured. A simulacrum of both an undulating landscape and the pure architectural form.”