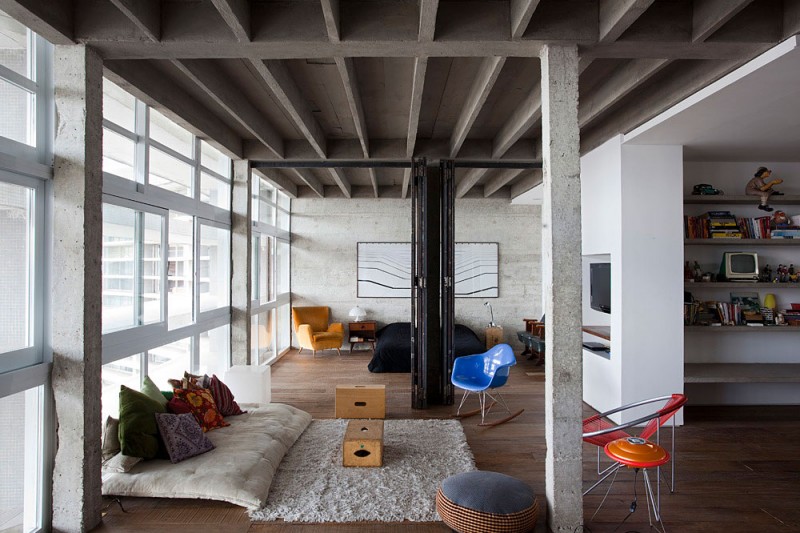 The apartment in the original Oscar Niemeyer’s masterpiece was completely demolished remaining only columns and shafts which determined the new division.

A central block was built separating intimate from social area. Facing the intimate area, the block houses linen and closets. Facing the social area it contains kitchen and a concrete shelf (where the first shelf works as a bench) that contains the owner’s memorabilia, ranging from music to art, such as palymobil and awards in Cannes that he won at the advertising agency where he works.

Also in the social area, an island made of concrete work as bar and dinning table.

A large wooden bookcase designed to fit behind the desk houses a vast collection of CDs in the shelfs while the drawers holds the collection of LPs, since the owner also dj, whether at home entertaining friends for parties, with a view of São Paulo’s skyline at the top of the 31 th floor of the iconic building, whether in clubs in town.

Large raw steel doors separating the bedroom from the social area may remain open to enlarge the space, or closed when privacy is needed.

Behind the bed comes a concrete wall of the original building with scars of more than 50 years standing. A diptych of the photographer Roberto Wagner tops the bed.

The bathroom has a toilet enclosed beside the shaft, a sink for open space and a large glass box houses the showers and an old bathtub.

During the demolition, the original beams and slabs were discovered and kept exposed. A plaster white ceiling appears in some parts of the flat bringing more warmth to those areas.

A concrete device under the back windows works as a cabinet in the bedroom and laundry and as a bench and in the kitchen also housing a wine refrigerator and niches for bottles, that he can grab anytime, put on a Mile’s Davis Kind of Blue, and watch the sunset trought Oscar Niemeyer’s “brise soleil” in a comtemporary apartment almoust without walls.”

A Vibrant and Colorful Apartment in Pinheiros

Impressive Duplex Condo in the Heart of Tribeca

House in Itaipava by Cadas Architecture