Completed in 2009, this two story contemporary home is located in Brightwater, a town 12.5 miles (20 kms) southwest of Nelson in Tasman district in the South Island of New Zealand. 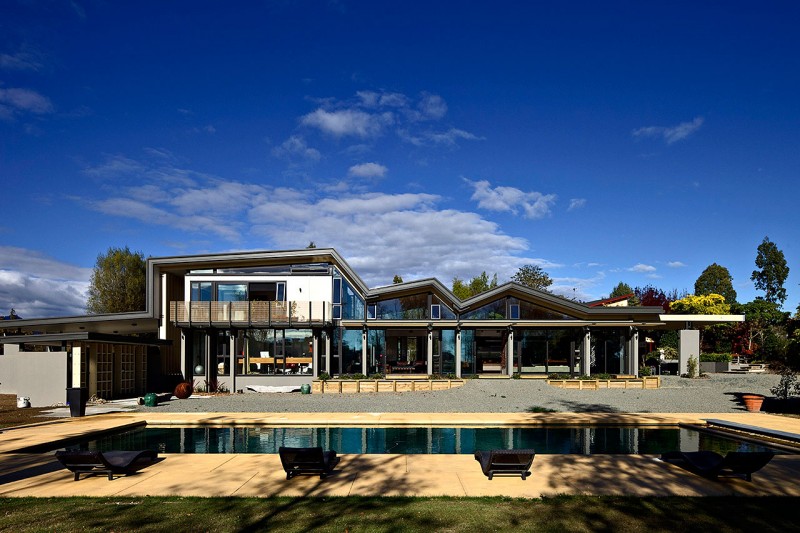 “Mountain Range House develops research and analysis of previous practice projects where traditional Pacific verandahs have provided intermediary living space at the transition of building to landscape. In attractive climates these external transition spaces, often finished in simple timbers, collect activity at the building edge where physical and visual access to landscape is unrestricted, immediate and inviting. Without enclosing walls, a verandah forms a single space held between horizontal flooring and roofing planes, and orientated outwards to the surrounding landscape by the building behind and transverse access.

Mountain Range House explores the relationship between horizontal plains parallel and transitioning to the landscape, and the holding and releasing of the space between through shape and timber materality, to allow a collection of primary living spaces to function and condition as a single verandah space.

Situated beneath the Richmond Ranges, in New Zealand’s South Island, this enclosed verandah provides new living spaces for an inter-generational family between their existing farmhouse and pool. Whereas the farmhouse holds tight contained spaces within perimeter walls, the new open and elongated transition spaces connect and inform living with the landscape.

Like the mountain ranges above them, the new house concertinas in silhouette to define connected sitting, dining and kitchen areas within a single communal space for all the family to converge and spread out within.

This single transition space is articulated to a series of living areas through volume and light rather than between walls. Each ceiling fold defines program space, connecting in series parallel to landscape. Volume continuously responds to the exterior environment, with light captured through full length north eastern glazing, differentiated by perimeter wall dividers and external sunscreening, and then held and released between warming horizontal timber ceiling and flooring planes. Hoop Pine, poplar and maple finishes layer richness and invitation to counter the open scale and rear concrete walls which orientate the interior outwards to the landscape whilst providing thermal mass to stabilize the large space environment.

Mountain Range House’s internal living verandah provides maximum connection to the exterior landscape whilst providing an inviting and articulated series of living spaces, each gaining immediate and ever changing architectural quality from the exterior.”

Beautiful House on the Mountain by Alric Galindez Architects