Completed in 2008, this two story contemporary home is located on the outskirts of Bergen, Norway. 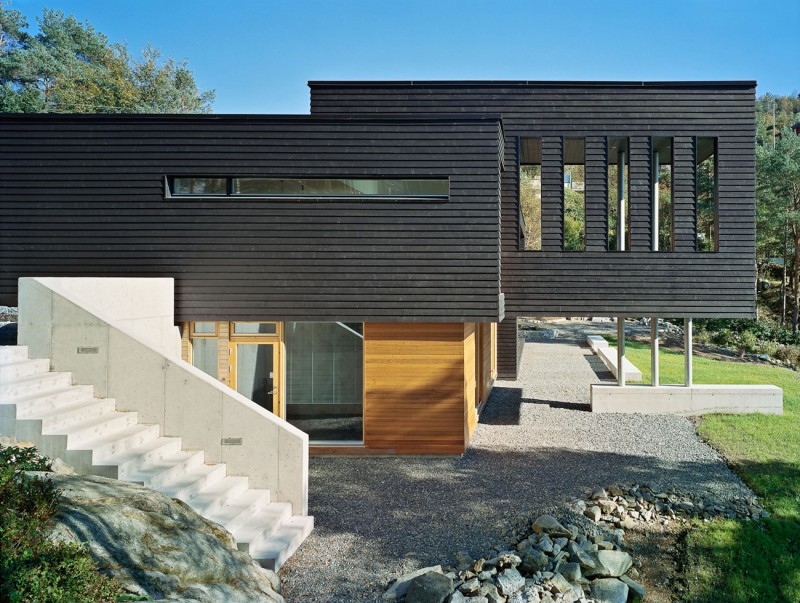 “Overlooking breathtaking fjords and a stretch of Norway’s west coast archipelago, Villa Storingavika is a robust yet refined vessel from which to appreciate the delicate coastline and sometimes rugged climate. It is a pale timber volume enrobed in a crisp, ‘pleated’ dark timber exterior.

Previously there was a small cottage on the site, and when Eli Bakka and Jan Sem-Olsen acquired the property from Jan’s mother in 2004, they decided to tear it down and build a permanent home for themselves and their two grown children, Ina and Erik. “Ever since Jan was a boy, his family had the land and the cottage, which the family often visited,” recalls Eli. “Because Jan had such strong feelings for the place, we decided to build a new house to live here. It was a very beautiful view, we had the possibility to build, and I had always been interested in design and architecture.”

When the owners first approached architect Todd Saunders, they had a clear idea about what they wanted. Their brief called for an upper level with generous open-plan living rooms and a master suite, while a lower level would be used by their children and include a small self-contained apartment. But they were also already thinking about details: “We wanted no trim around doors and windows,” says Eli, “and no baseboards where floor meets walls.”

“The process with the client,” Saunders notes, “was in several phases. The first stage, sketch design, was the most intensive with many meetings.” During the workshopping of ideas “there are always lots of variations on the same theme, and there are a few principles you want to attain in this process.” One key principle that emerged was to create a “covered outdoor space,” and another that the client wanted to “wake up in the morning and see the ocean.” “We worked really tightly together” he recalls. “The house has to match with the personality of the client. At the end of the process, the client and architect are both so in ‘tune’ that the client is as focussed as the architect to get the building built to the highest standard.” Jan agrees: “What we liked about working with Todd is that he really listened to us.”

At the outset of his career, architect Todd Saunders left Canada for Norway where he has worked for much of the past decade in Bergen. Since then he has developed his repertoire from modest residences and cabins to notable landscape projects like the Aurland Lookout, for which he and collaborating architect Tommie Wilhelmsen have received international acclaim. Photo above: Jan Lillebø

The site of Villa Storingavika, located on the outskirts of Bergen, comprises a rocky outcrop and garden but is essentially a rather compact area. “My primary aim,” Saunders recalls, “was to create more open space than the site first offered by reclaiming as much outdoor space as possible”. The house is oriented along the contours of the site and concrete stairs link an upper outdoor terrace with a lower lawn, utilising all of the natural terrain. This also minimises the impact of the house on the topography. Built-in concrete furniture is also integrated into the site, increasing the use of the lower terrace as an extension of the interior space.

Unlike some of Saunders’ other houses whose plinths lightly hover above the ground, this house is well-grounded in the terrain. On both storeys, the utility and service rooms are located along the northern side of the house, while the living areas open out to the south and the view to the sea. As a consequence, there are very few punctures on the northern side, and large floor-to-ceiling windows face the south. Emerging from the landscape-bound volume of the house is a lightweight wing of space; a six metre long cantilevered balcony. “We were experimenting with different room heights” says Saunders. “They vary from the lofty balcony ceiling to a level just above a low six metre long window where the space is most compressed.” The height of the outdoor room, the tallest section of the house, signifies its importance in the scheme. Notably, the exterior ceiling timber continues into the house in the lounge room where the ceiling height is as tall as the balcony. The balcony is pierced by three circular steel columns that are ‘threaded’ from the ground to the roof.

As a work of architecture, Villa Storingavika is a textbook example of a regional modernism, combining the modern gesture of wide spanning platforms of space with the traditional forms and materials of Bergen’s light-framed timber houses. The building’s proportions are also akin to Bergen’s maritime architecture and its long history of two-storey timber buildings. Translating this established building approach to a restrained, contemporary volume links the house to its context, and ties it indelibly to the site.

The house departs from pure tradition though, and is both experimental and inventive. A deep 60cm folding edge separates the house from the outside space, and as it snakes up and around the façade creates a deep shadow that defines the strong graphical composition. This volumetric depth also creates a zone that interlocks internal and external space. As Eli notes, the outward extension created by the folding edge and the outdoor balcony rooms “makes the house look bigger than it actually is.”

In its composition, the building relates to the outcrops of coastline that it frames. Metaphorically, the house could be compared to the eroded outcrops of rocks it overlooks, with its cantilevered ledges and deep reveals and apertures. It has a sense of permanence that grounds it to the landscape.

Interaction with the view and a poetic transition from inside to outside lends richness to the stark interior.  The rough-sawn weatherboards catch jagged shadows with their tapered profile. Moving inwards, this inky timber layer is then seemingly ‘peeled back’ to reveal the smoother Canadian cedar that is ship-lapped in a shallower profile. This middle layer is the transition to the pearly white interior with its smooth and uninterrupted surfaces that are free of cornices and superfluous trims. It’s an interlocking of volumes in a simple but exciting spatial experience. Stark yet harmonious contrasts in texture and tone of materials give clarity to the architectural ideas.

Three main materials are used in the project: glass, black-stained fir and oiled Canadian cedar. All of the decorative and aesthetic qualities of the building come from the materials themselves and the dimensions of those materials. It is a very elemental, minimal response to the place, and continues through to the simple, robust and utilitarian details. Even the heating of the house arises out of the conditions of the place. A 200m long pipe extracts the constant heat of the ocean water, then recycles this heat back into the house to heat the floors. The system uses a fraction of the electrical energy that would otherwise be required for heating.

With honesty in its treatment of materials and integrity of construction, Todd Saunders’ design for Eli and Jan’s villa at Storingavika succeeds beautifully in blending house and landscape. Though conceived within the framework of an uncompromising contemporary architecture, this house demonstrates that a strict design approach can meld seamlessly with the making of a comfortable and dignified home.”

Studio 2 Pi Architect & 02 Architecture & Mech. Engineering Work Together to Design a Villa with Views Over the Sea in Pera Melana

The Beck Residence by Horst Architects