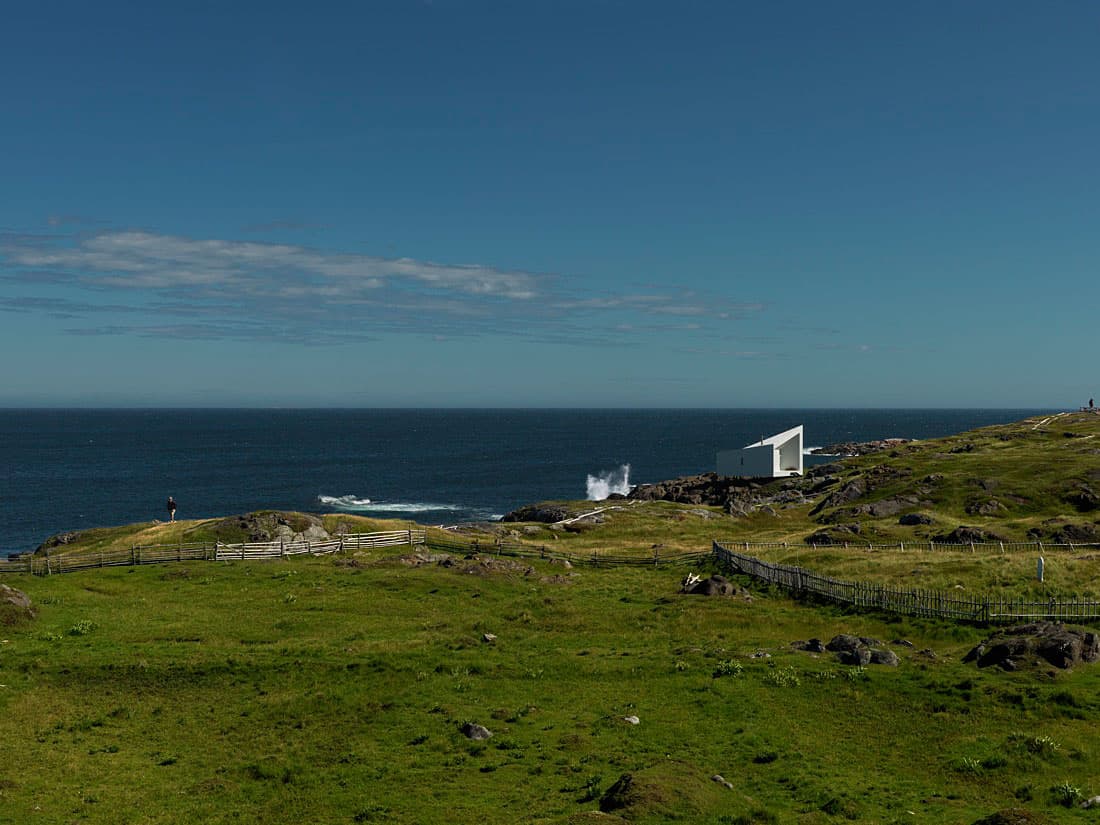 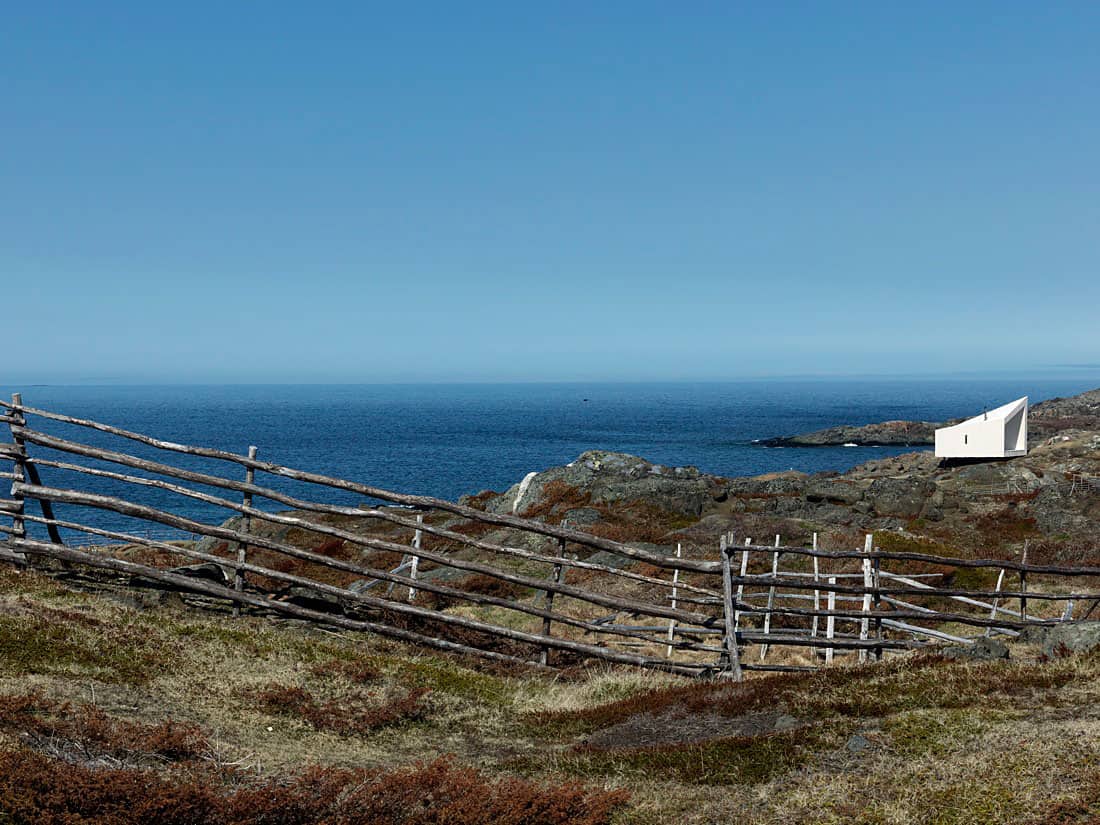 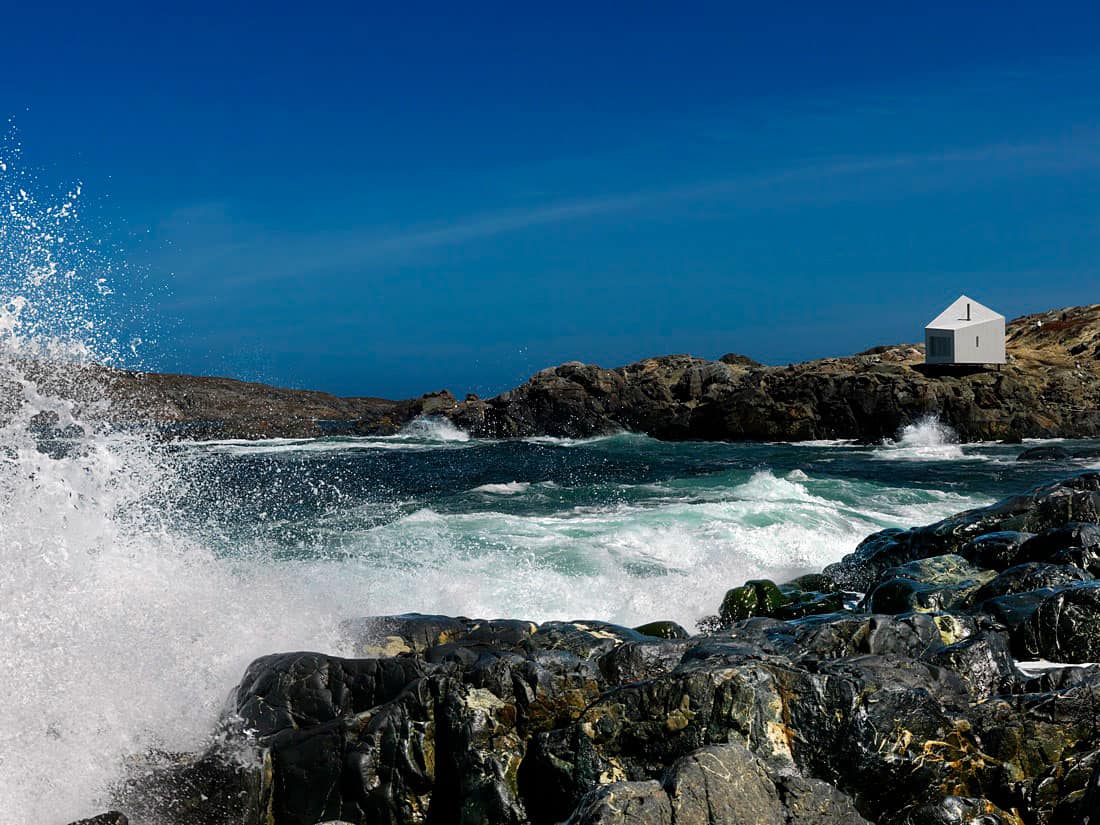 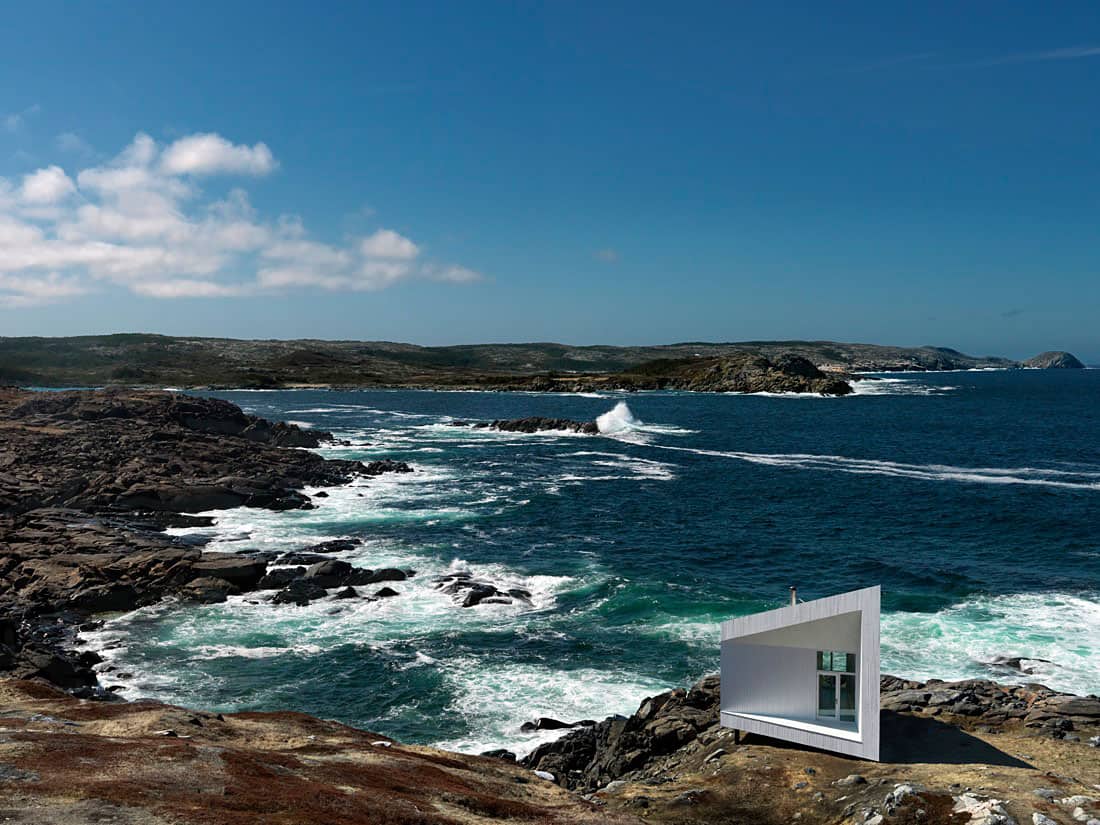 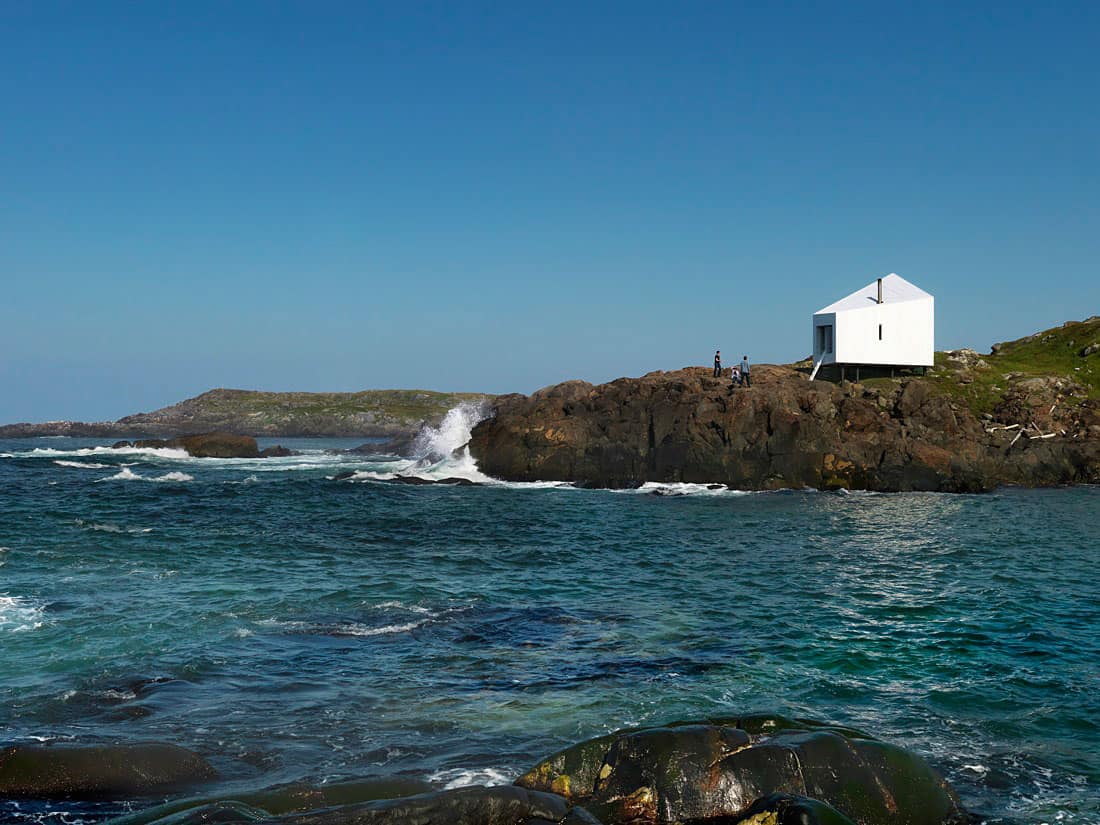 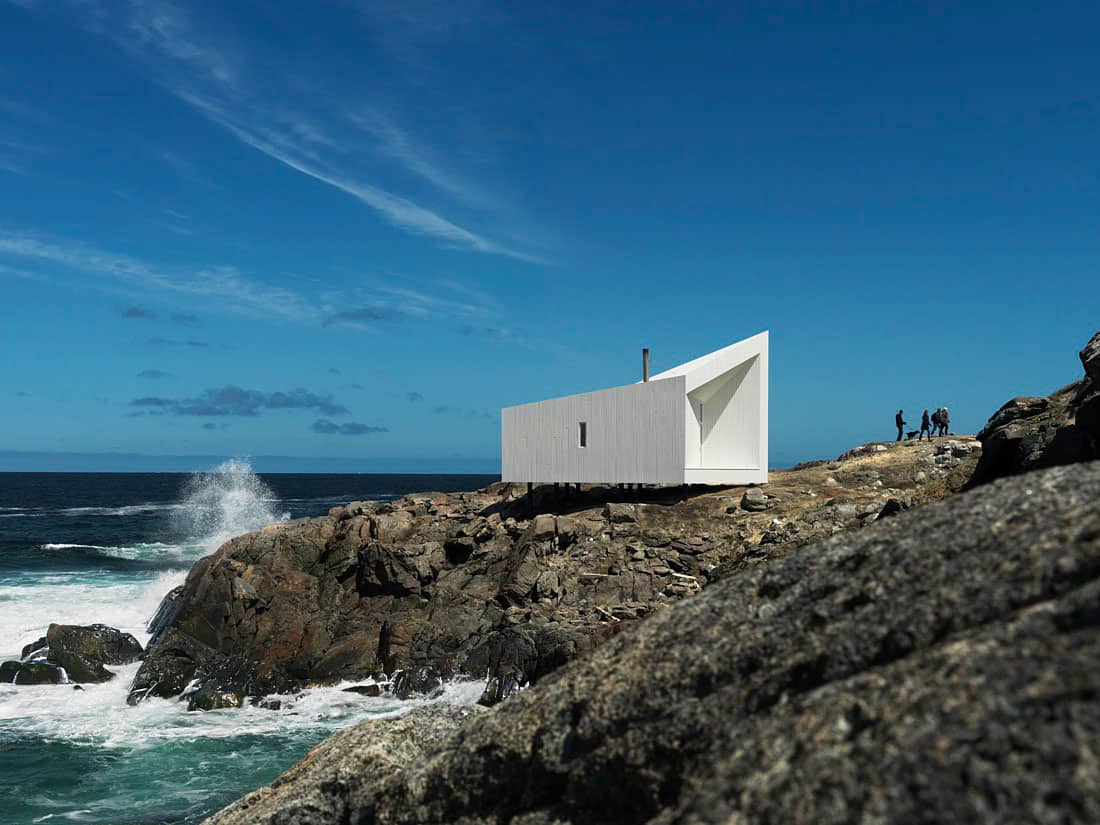 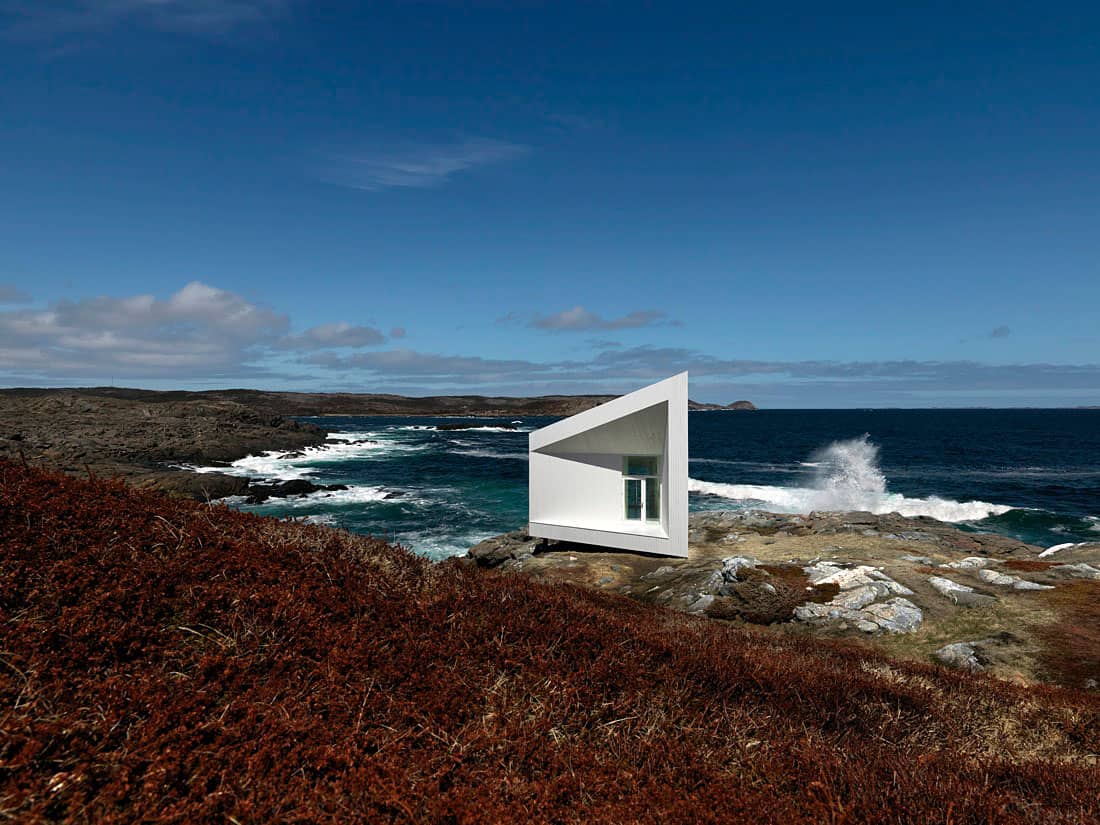 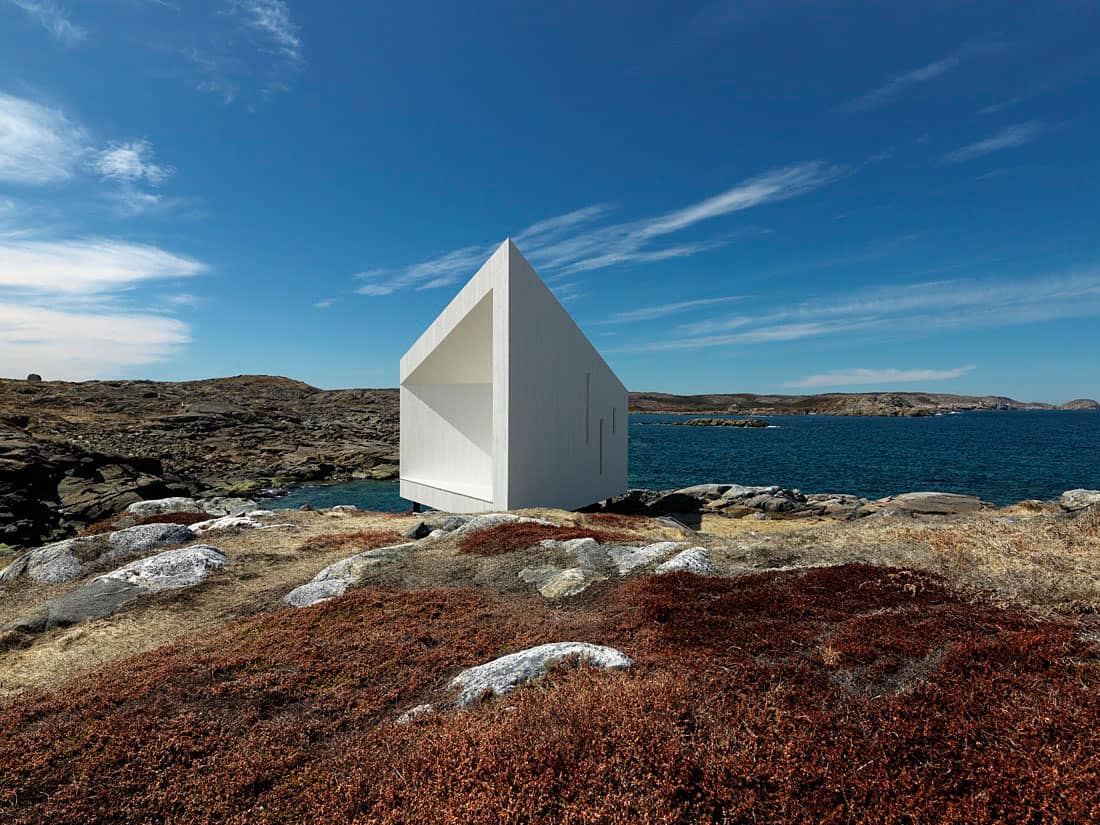 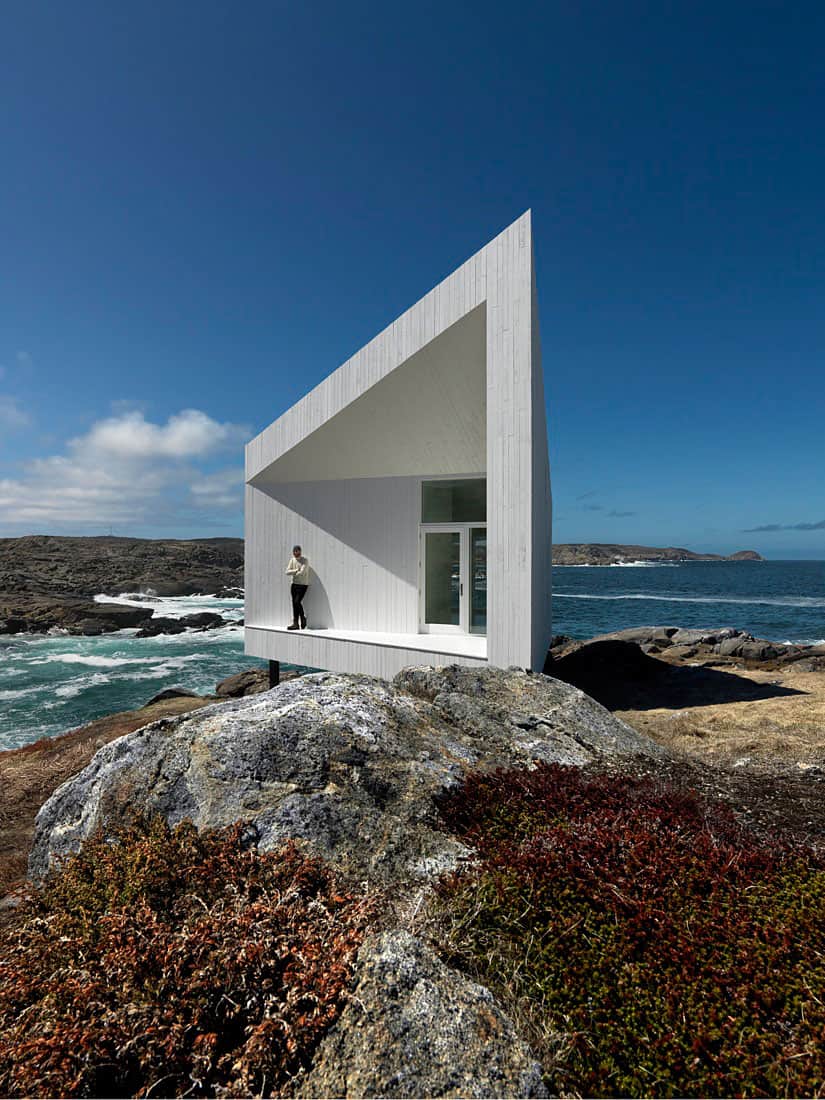 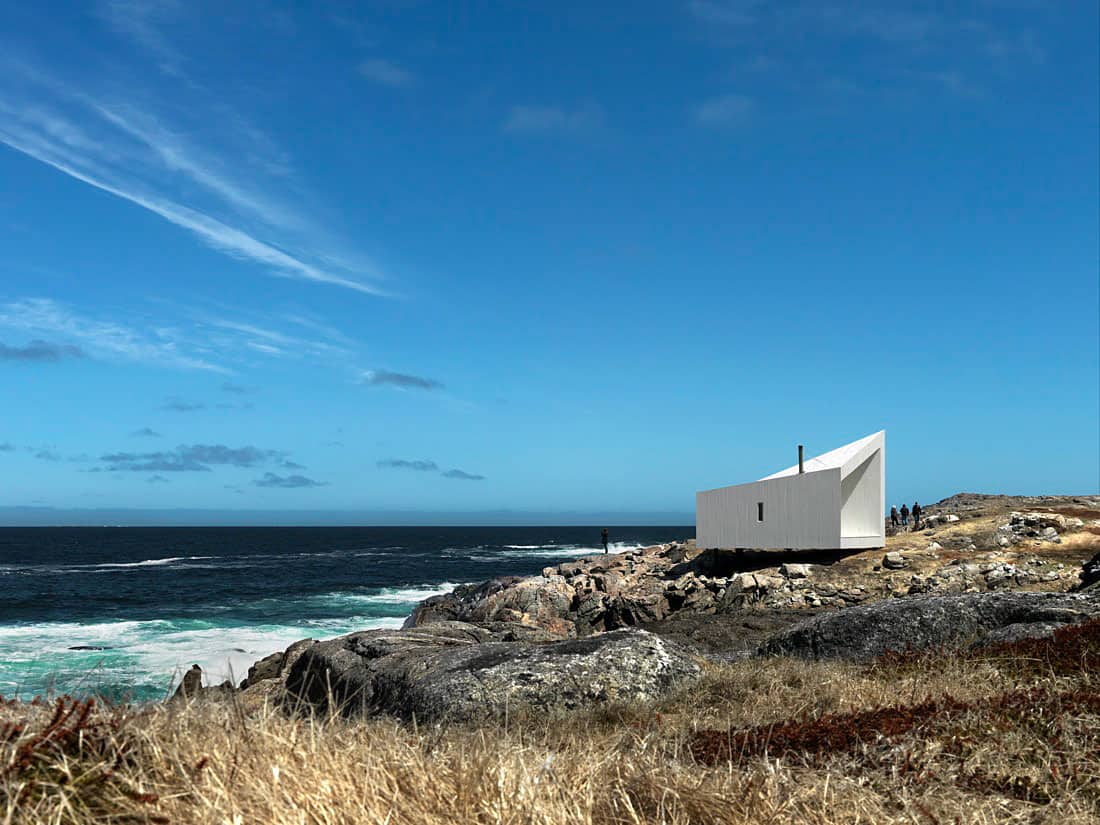 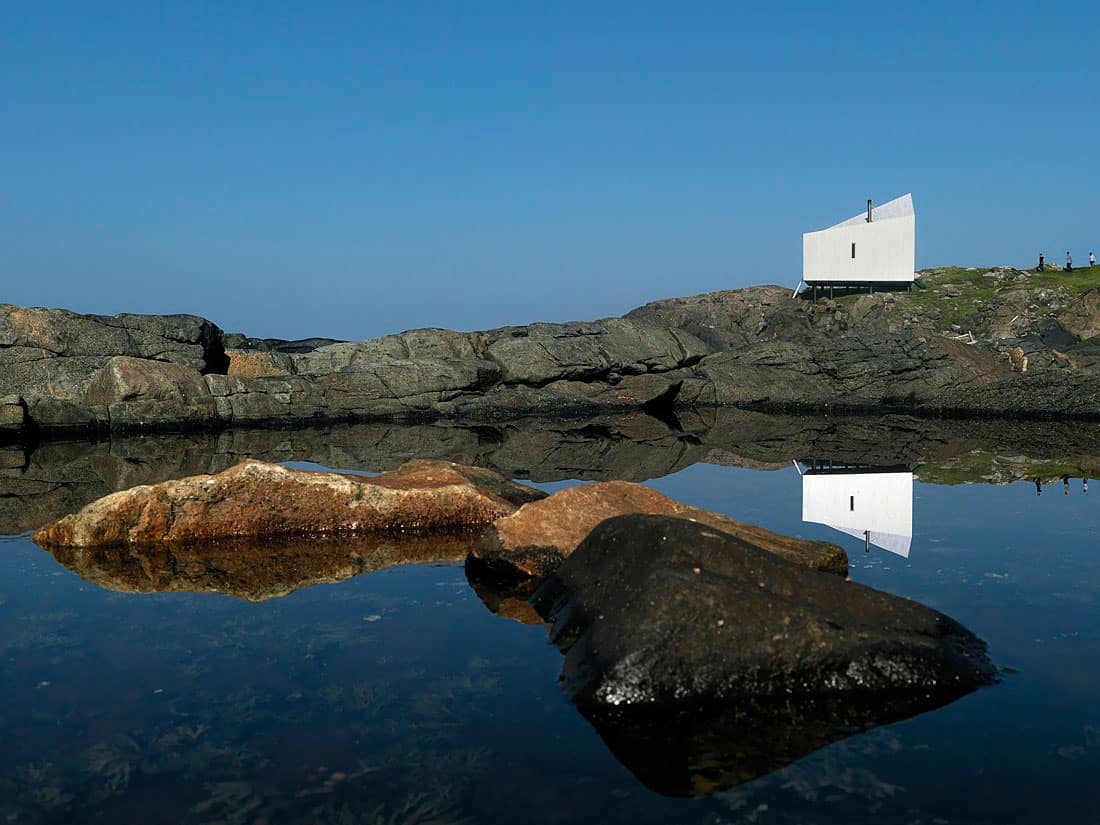 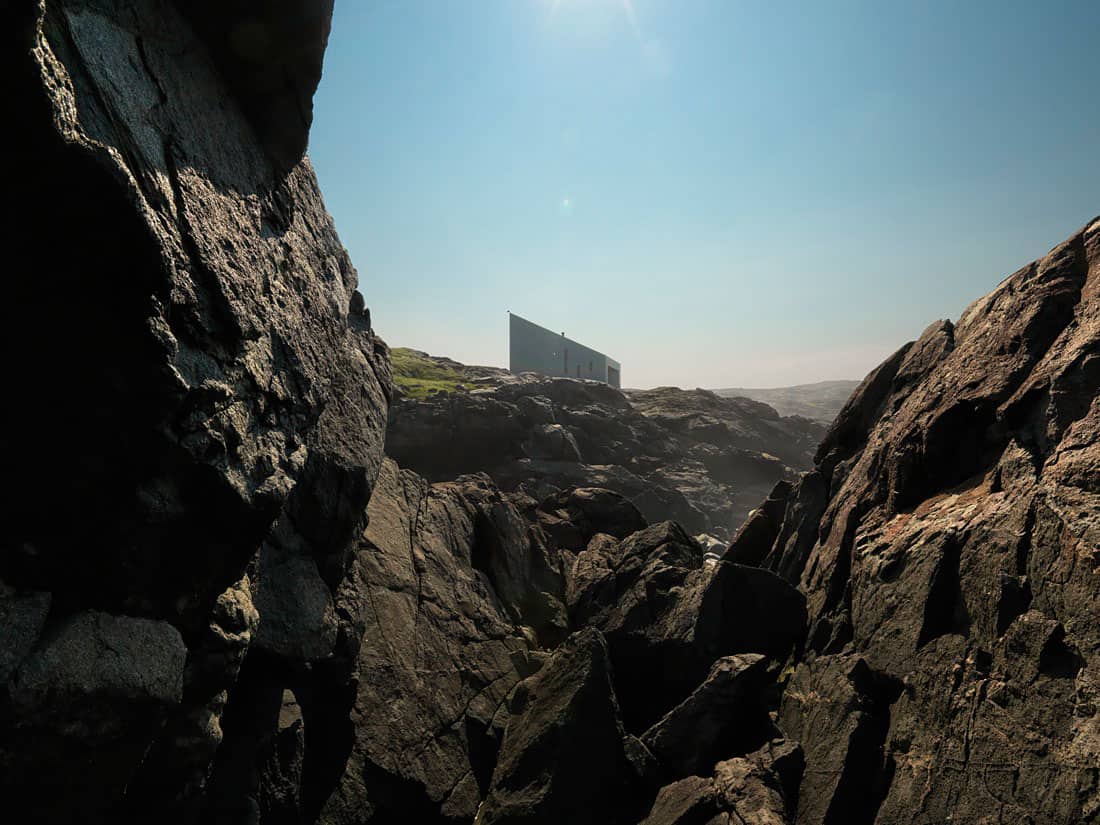 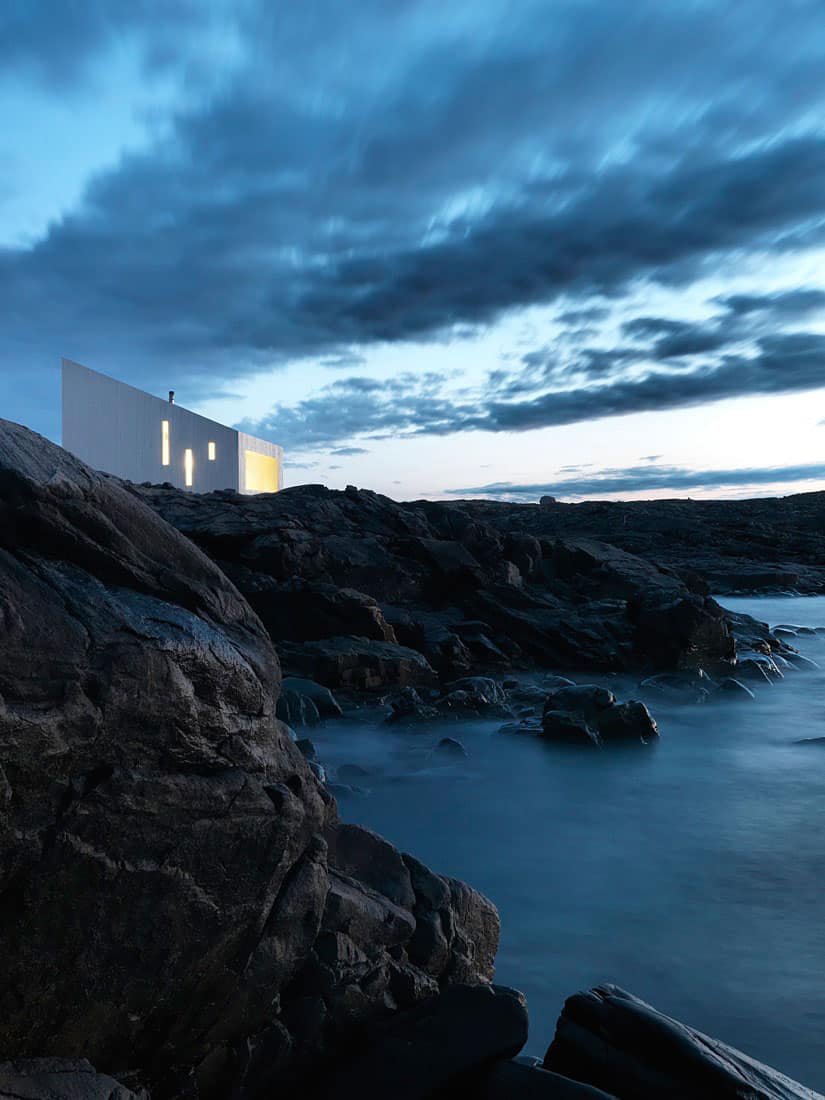 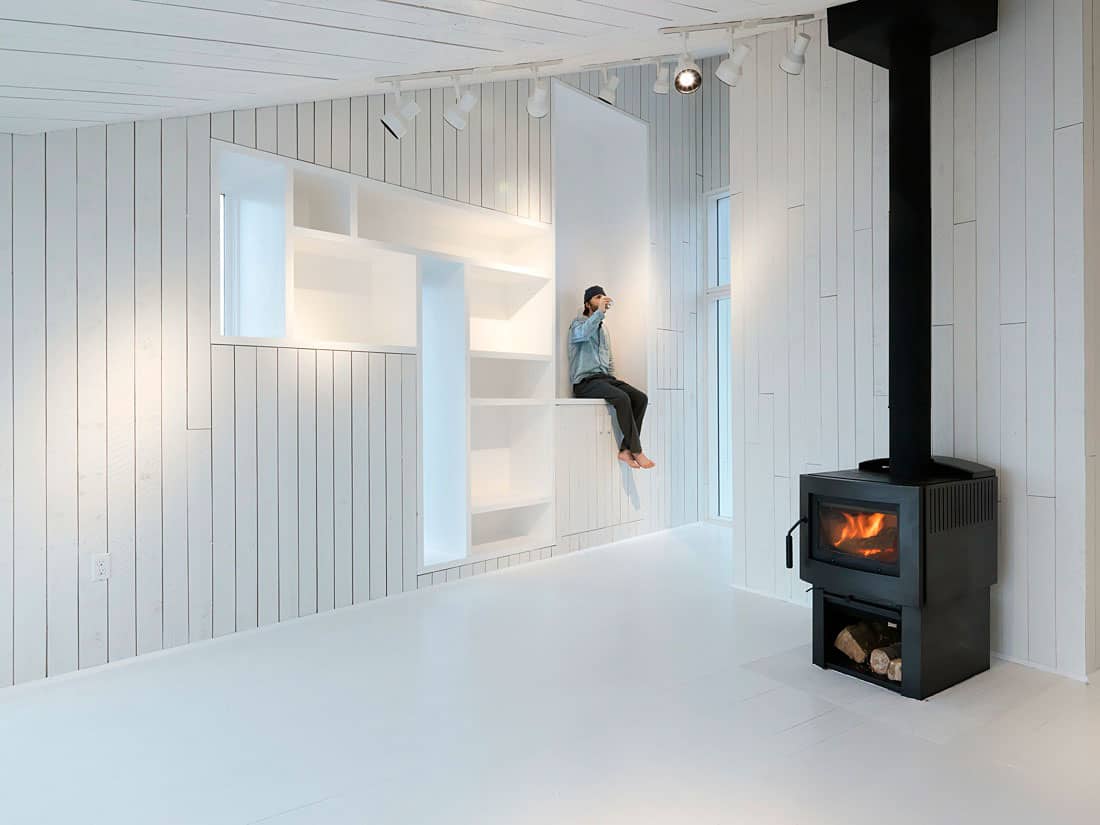 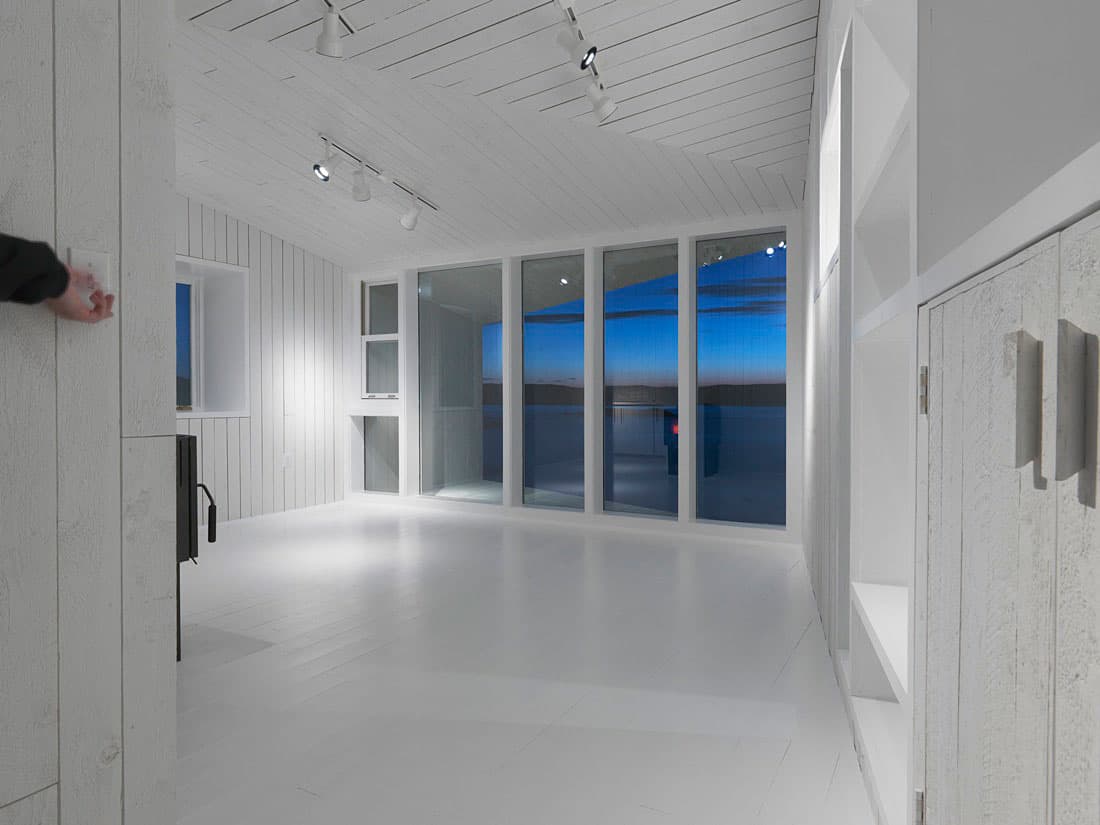 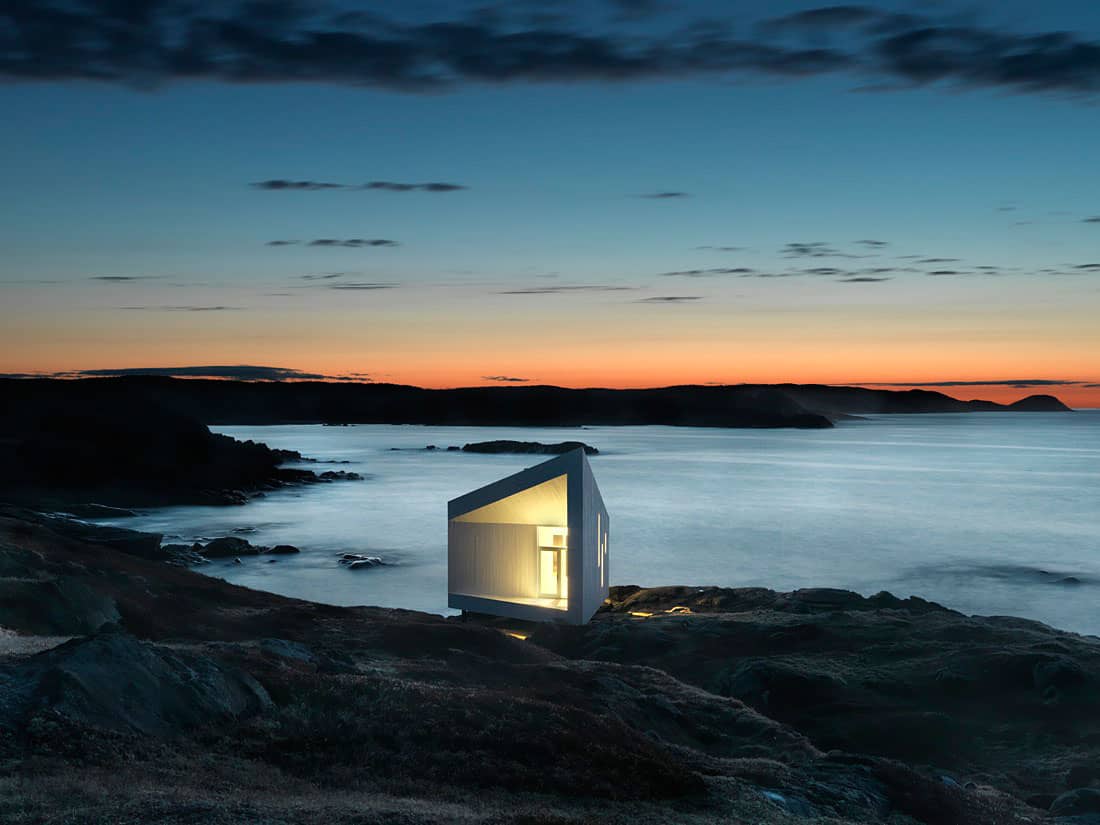 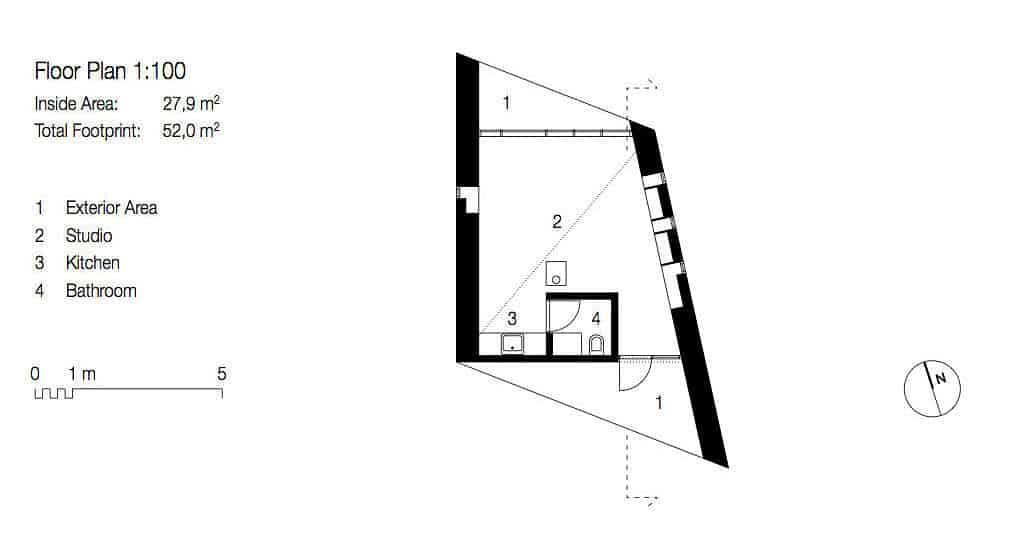 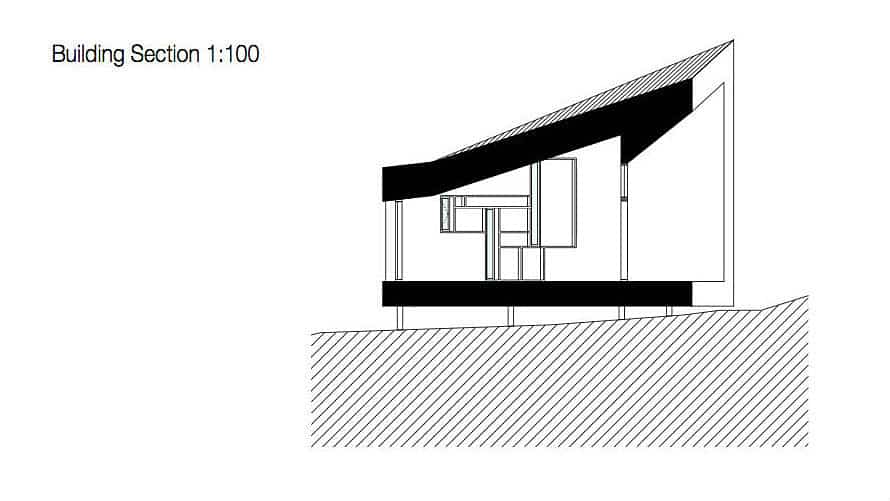 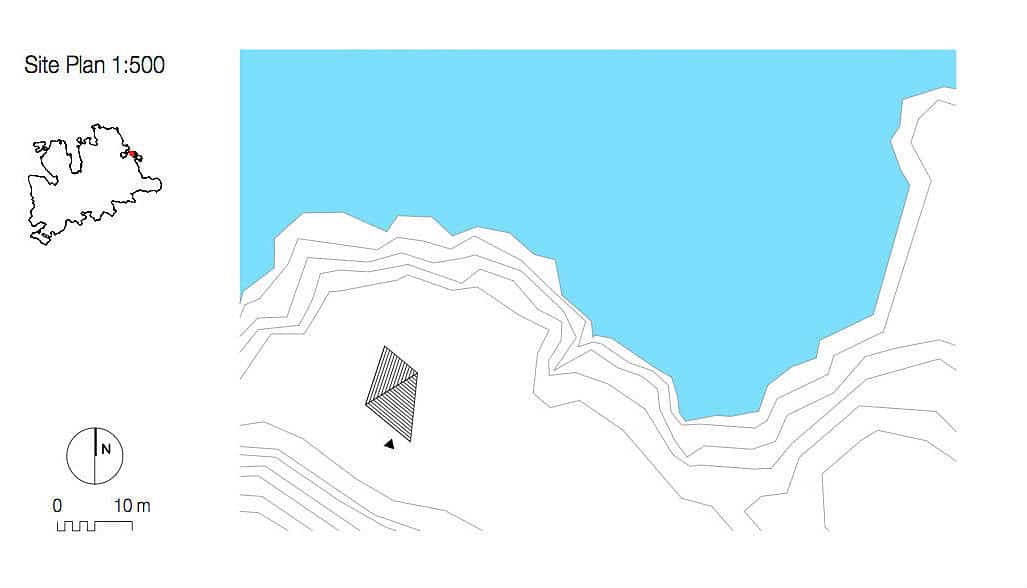 Completed in 2011, this 322 square foot contemporary artist studio is located on Fogo Island, the largest of the offshore islands of Newfoundland and Labrador, Canada. 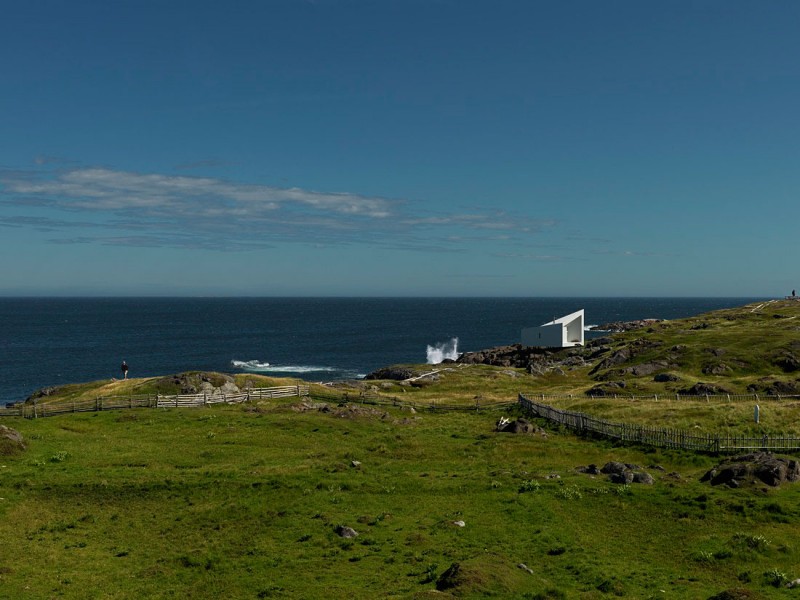 “The Squish Studio is located just outside the small town of Tilting on the eastern end of Fogo Island. First settled in the mid-18th century, Tilting is known for its strong Irish culture and its recent designation by Parks Canada as a National Cultural Landscape District of Canada.

The Squish Studio’s white angular form, sited on a rocky strip of coastline, that could rival Italy’s western coast, offers sharp contrast to the traditional vernacular architecture of the nearby picturesque community of Tilting. As its architect, Todd Saunders, has commented on the studio’s siting, “…it is out of sight, but close.” The approach to the front entry of the studio is dramatic, as the most southern end of the studio rises twenty feet above the ground, in sharp contrast to its most northern tip that measures only half that dimension.

The compact, trapezium shaped plan of the studio is augmented by the extension of the east and west exterior walls to create a sheltered, triangulated south entry deck and a north terrace that overlooks the ocean. From a distant view, the streamlined form of the Squish Studio becomes apparent with its high back and low (squished) front designed, in part, to deflect the winds from the stormy North Atlantic.

As we approach the entry of the studio we are greeted by Silke Otto-Knapp, a London-based artist and the first occupant of the Squish Studio. As Silke brings us through the studio, the spatial compression of the tall and narrow entry area gives way to the horizontal expanse of the main room. The downward angled roof leads the eye to the full height oblong glass window focused on a splendid view of Round Head.

The vertical white planks that line the interior walls are interrupted by a playful series of narrow windows integrated with an expanse of built in cabinetry. Silke’s quick figurative studies on paper are posted on the walls, as well as, several large scale canvasses. She is delighted to work in such an architecturally inspired space, especially when it is stormy and she can experience the immediacy of the sea and, on some days, observe the dramatic shift of the island’s weather.

The Squish Studio, like most of its other counterparts, is equipped with a compost toilet, a small kitchenette and wood-burning stove. Power is supplied by stand- alone solar panels, mounted on an adjacent hilltop. Both the interior and exterior of the studio, including the roof, is clad with spruce planks that are painted white.

At night, the studio, illuminated by the soft glow of its solar-powered lighting, appears as a lantern or a lighthouse placed strategically on a rocky cliff to over- look the North Atlantic. In its isolation, one can also imagine a sole occupant, vulnerable but protected from the elements – inspired to work late into the night, occasionally distracted by the crash of the waves, or perhaps, fully immersed in the work at hand, the first glimpse of the sunrise through the Squish Studio’s slot windows that face the north-eastern horizon.”

Urban Art: Before I Die… In Nola by Candy Chang