House and Design Studio in Kortrijk by Devolder Architecten

Kortrijk-based studio Devolder Architecten has designed the House and Design Studio in Kortrijk, in the Flemish province West Flanders, Belgium. 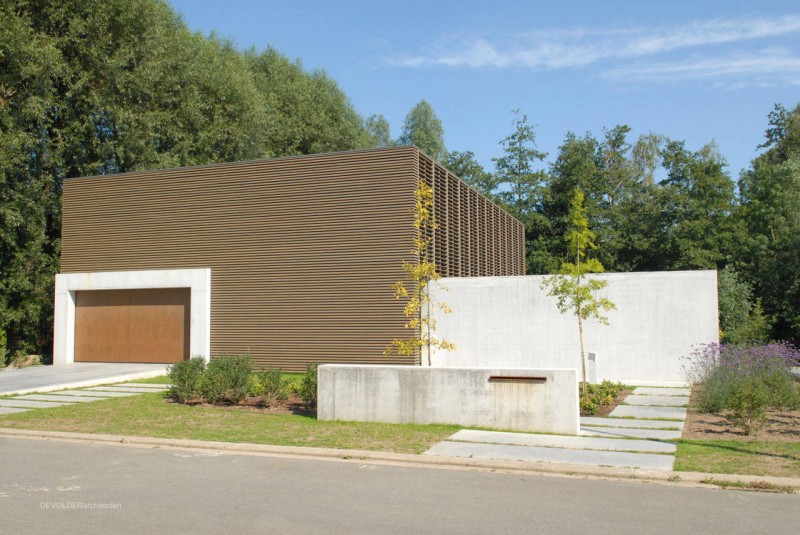 House and Design Studio in Kortrijk by Devolder Architecten

“The building site contains about 25 large existing trees along a brook. Some of these are completely grown out willows and alders. The house itself is conceptualized as a quite closed wooden box in this landscape. Underneath the box is a concrete pedestal that varies in height according to the elevation of the terrain.

This concrete returns as material for: a privacy wall, a low wall for the letterbox and also for the framing of the garage. A third prominent material is the rusty looking corten steel that is used for the small outdoor stair, 30cm outward projecting window frames, the garage gate itself and the letterbox. Not with standing the closed outer appearance, the building’s interior is bright white and sun-drenched. Large windows allow contact with the surrounding nature and garden.

The latter is conceived as a continuation of the surrounding fields. Though the outer simple box-like shape, the interior reveals a large and interesting architecture. Because of the double function – both living and working – two stairs were installed. This has the added benefit of being able to circulate easily within the house (in a loop) as well as the possibility to reconfigure the office space into a kangaroo house (a much debated typology in Belgium and the Netherlands).

Structurally the building was designed as a factory for living. A basic grid: 3 by 5 columns and the added concrete privacy wall in the garden stands upon a foundation of 15 + 2 pile foundations. The foundation beams also serve as soil retaining walls (necessary because of the sloped terrain). All removed soil was reused on site between these beams as fill up and lost formwork for the load-bearing floor.

All floors are of polished concrete. Non-load-bearing walls have been constructed of acoustically absorbing plasterboard with an extra layer of plaster. Other and non sound-sensitive divisions are made by cabinets. This way the house is future proof in the sense that almost all walls can be relocated without mayor changes in the structure. Besides the fact that most materials are left bare, the house still bathes in acoustic luxury by the use of sound absorbing stretch ceilings.

Energetically
Rising energy costs, environmental issues and regulations prompt the use of energy saving measures. First, the entire insulation shell is held at a constant high level. This is provided by 20cm of cellular concrete, 8cm of PIR foam and 6cm of glass wool. Specific attention was also given to the airtight sealing of the construction.

To prevent overheating, wooden solar blinds are mounted on both the southeast and southwest facades in front of the large windows. This at a distance of 50cm in to facilitate maintenance and cleaning. All windows have triple high insulating glass set in Merbau (wood) frames. Beside these frames all wood used in the project is Russian larch, treated in a way that will allow a gradual desaturation of its colour.

The roof is insulated using sloped Rockwool (between 6 and 18cm) with underneath another 10cm of PIR-foam. A highly efficient 15Kw air to water heat pump provides hot water for the low temperature floor heating and sanitary needs. Ventilation is taken care off using an integral system with a heat recovery of 90%. 46 invisible photovoltaic panels on top of the roof provide for approximately 85% of the used electricity of the house.

All these arrangements guaranty a very high level of comfort despite a minimal energy use. The sum spent for all energy usage (heating, lightning, electricity…) inside the building for the entire year 2011 was under 500€.”

From Garage to Loft by Studio NOA Architecten