Completed in June 2011, this 4,036 square foot contemporary residence incorporates the ruins of a former mill. 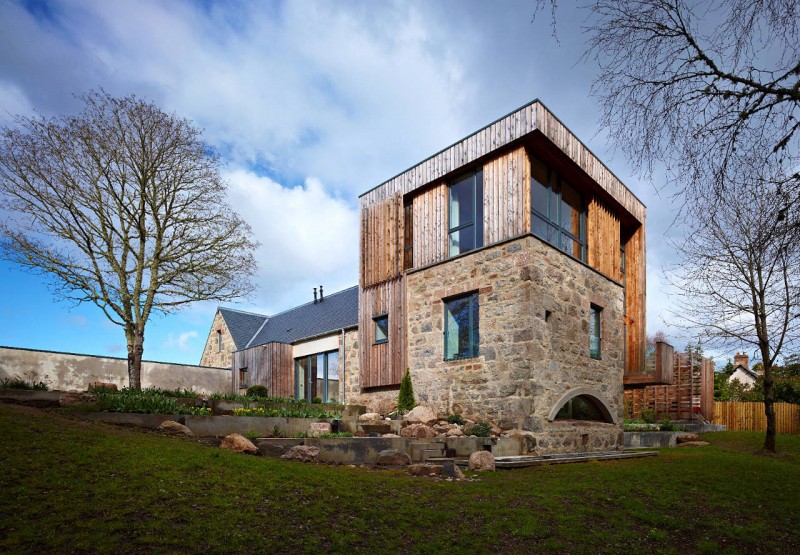 “The starting point for the Mill project was the few freestanding walls that remained on the site. The existing walls created a series of courtyards, some of which has begun to be re-inhabited by nature.

Our clients brief was for a large family house. We were keen to re-imagine the building in a progressive form, layering a series of forms over the ruins to create a clear juxtaposition of old and new.

Some elements are clearly defined as freestanding objects, the Garden Room, Gym and Garage building slide alongside the existing walls, the new raised upper story is overlaid, with a folded larch roof and wall floating over the castle-like structure of the existing walls.

All the forms create new and intriguing courtyard spaces, allowing the creation of a variety of sheltered spaces to allow our client to engage in his passion for gardening. Two south facing courtyards have been created, the eastern courtyard terraces down in insitu-concrete walls inhabited with plants to a small burn. The western courtyard allows evening light to be drawn through the depth of the house, through an existing tree that has been preserved, and also became the axis for this series of spaces.”

A Spacious Home in the Mill Valley by Aidlin Darling Design

Renovation of an Ex Oil Mill by Ludovica+Roberto Palomba

The Mill by WT Architecture

Penthouse in Mokotów by HOLA Design