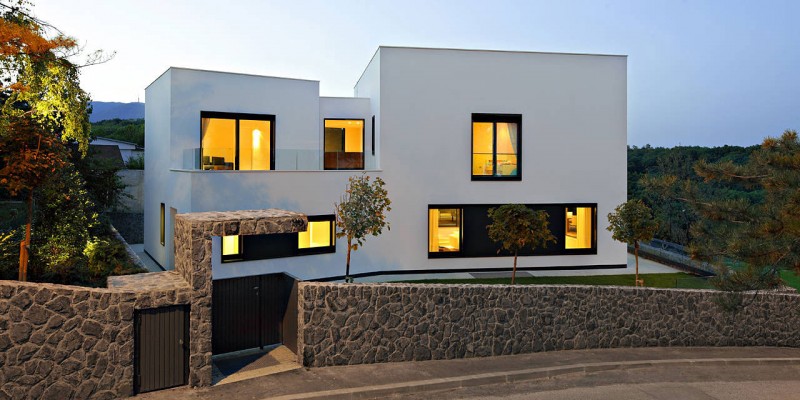 “The Jelenovac residence site is situated on the junction of two streets, surrounded by family houses and the Zagreb city park Jelenovac on the front. Newly build house opens itself towards the attractive part of the terrain, greenery, views.

The house is positioned in a way that enables forming of a smaller garden which serves as a tampon zone between the traffic and big garden. The terrain slope generates house pedestal which comprises secondary facilities; the outside spaces, the entrance. Floor plan follows the geometry of the site and divides itself in two parts.

The middle volume contains spiral staircase cladded in wood, who’s sculptural form of curved surfaces corresponds with the orthogonal system of the house in an unusually soft manner, making the element a center piece of interior.

Decomposing of the volumes originates in function. In a larger volume all living spaces are placed, while the smaller one comprises additional utilisable spaces. The smooth white facade in contrast with dark openings creates dinamics and elegance of the facade. Glass fences allow undisturbed views towards the beautiful scenery.”

The Carrillo Residence by Ehrlich Architects