Completed in September 2011, this 3,200 square foot two story home is located in the magnificent region of Cap-à-l’Aigle in the heart of Charlevoix, Quebec, Canada. 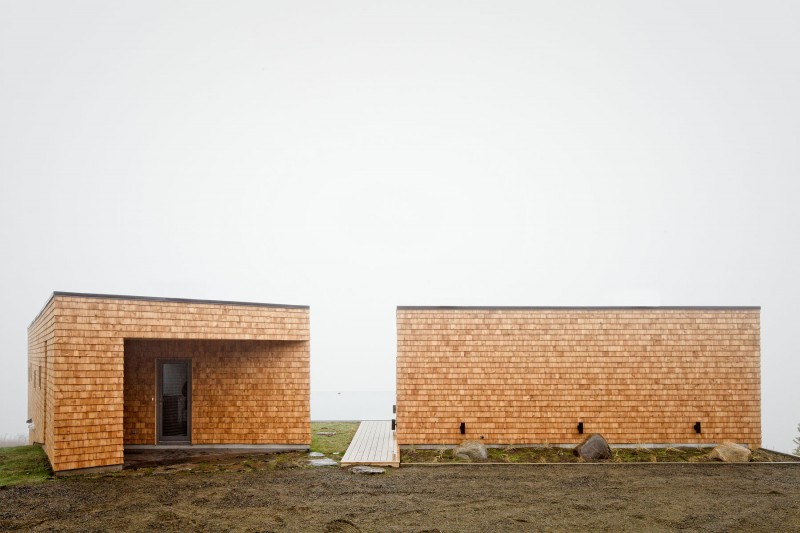 “The concept of the residence revolves around two off-centered volumes positioned in such a way to take in as much sunlight as possible and to make the most out of the different viewpoints. These two volumes seem to emerge from the forest and project themselves towards the River and La Malbaie. The whole house forms an angle that embraces a huge private terrace at the lower level.

Upon arrival, we discover the residence in its simplest form: two distinct volumes covered with cedar shingles. At first glance, it is both mysterious and unsettling. As we move towards and between the two blind volumes, we discover an exceptional view. This observatory is in fact a green roof under which lies a vast residence. The higher volumes, apparently isolated, house the bedrooms and the bathrooms. They are connected to an opened and largely fenestrated lower level containing the living areas.

At the center of the house, an architectural red metal spiral staircase acts like a pivot to the two principal axes. The living room, dining room and kitchen are connected to this staircase which incidentally serves as an ever-present visual signal. The radiant concrete floor and the foundation walls are left rough accentuating the contrast with the cedar ceiling. The kitchen, ergonomic and very contemporary, contains a large island counter which is used as a work surface and a dining table. It sits in front of a large panoramic window offering stunning views over the river.

This roomy urban house of 3,200 square feet built in a natural setting marries the site and its escarpment. It is particularized by a vast 2,000 square feet terrace, a real interior beach which extends towards the river, punctuated by large rocks and trunks as if they were left by the sea during low tide.”

Apartment in Kiev by Irina Mayetnaya and Mikhail Golub