The Gauthier House is a 2,884 square foot home over looking the Alps in Evilard, Switzerland.

It was designed by Roberto Pascual, Peter Bergmann,  and Yves Baumann of Bauzeit Architeken and completed in 2007. 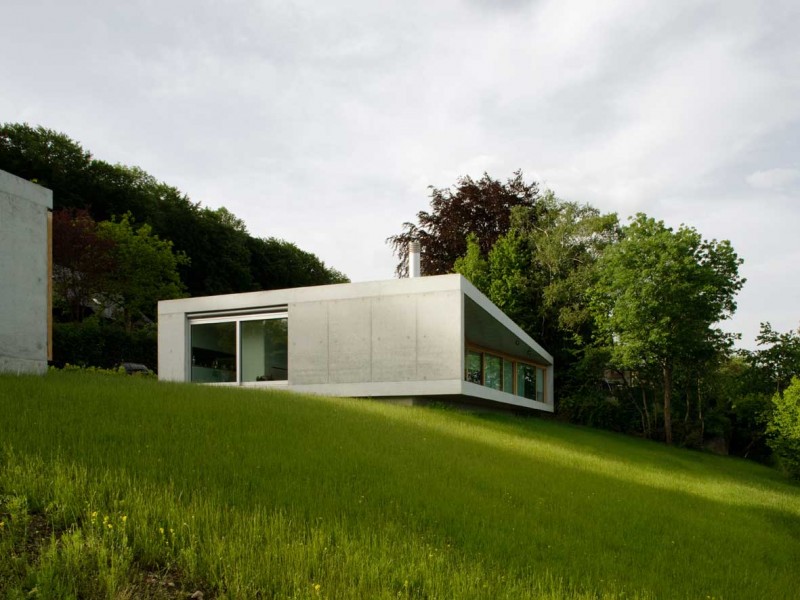 “The project is articulated based on two really simple spatial typologies. The first one, a compacted and pure single-storied level, figures the dwelling which opens onto The Alps through huge window panels, thus focusing on a frame of beautiful views. Consequently, the glazing surfaces on the entire level, structure the façade in a generous way. The panoramic window panels, fold inside thus providing a special expression to the ensemble, also forming the terrace-covered area and protected from the sun.

The difference of enclosure between North and South façades, become two plain and clear lectures, two faces: ‘behind’ the street and ‘on the front’ The Alps as a visual limit. The ‘courtyard’ typology is placed by means of an open terrace bordering on one side with the volume of the dwelling, by means of a vertical wooden enclosure and by a ‘green wall’, which at the same time separate the dwelling from the street. Finally, the garage, which at the same time protects the dwelling from the winds crossing the ‘Jura’ from the East. This permits a prolonged use of the terrace during a long term of the year. The dwelling is buried on its North side down the steep ground.

The volume of the lower ground floor retracts from the façade line in the first floor in three sides, what together with steep natural ground, produces an effect as if the dwelling was floating over the natural prairie. The interior is arranged in 4 individual rooms, including wet and communal areas which are defined by means of the concept of open space (free). Both the garden and interior rooms with their glazing façades open onto the valley.”

House by the Lake by Marte.Marte Architekten

Residence One by Studio RHE