This 5-star, 26 room hotel is situated in an historical building in the heart of valencia, the third largest city in Spain. 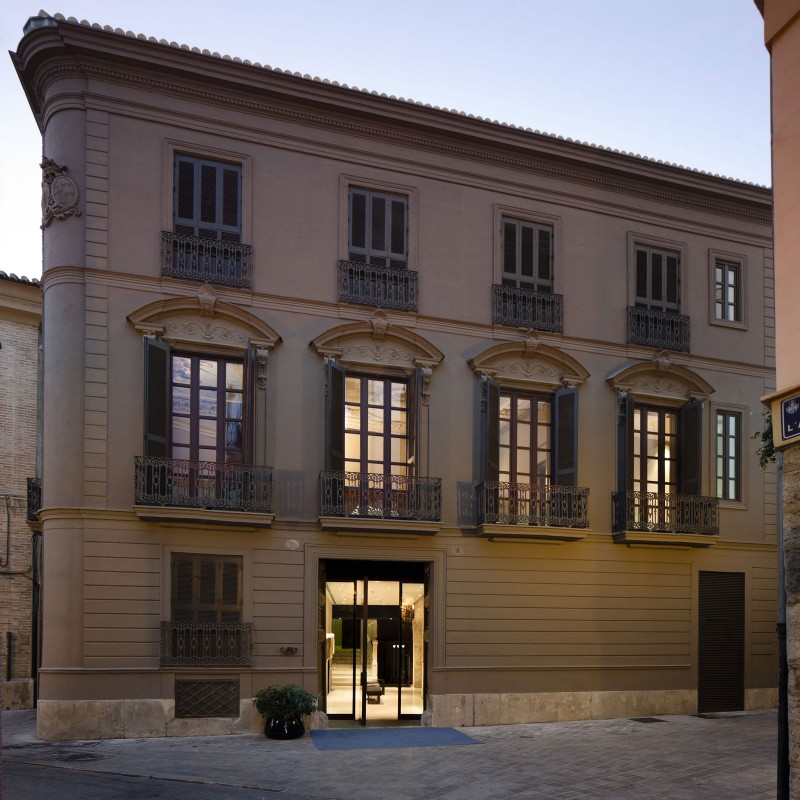 “Located in the heart of the city, little more than 200 metres from Valencia Cathedral and the Basilica, the Caro Hotel is the first historical monument-hotel in Valencia. An urban and commercially independent hotel, the establishment has intelligently merged the legacy of historical substrata lying within its walls with the most vanguard of interior design.

Unique and authentic in style, the project undertaken by the interior designer Francesc Rifé is meticulous in its attention to detail, imbuing the hotel with a contemporary air, clean, geometric lines, which merge seamlessly with the original architectonic features of the former Palace of the Marquis of Caro, whose eclectic facade dates back to the nineteenth century. Beyond its facade, its walls stand guard over an unparalleled inheritance of more than 2,000 years of history, of which the original mosaic belonging to the founding city of the Roman era, «Valentia Edetanorum» (2nd century B.C.), the thirteenth-century Arabic defensive wall, several gothic arches and nineteenth-century constructions have been preserved, restored and integrated into its spaces.

The result is a unique collection of 26 rooms, each different from the others, yet all warm, comfortable and inviting, where the architectural balance, pure lines and simple forms, the use of woods and the continuity of other first-class materials endow the settings with a great visual coherence. On the lower-ground floor, the gastronomic area houses three differently designed rooms equipped for all types of public events.

A space in which a historical legacy present in its own right, and yet destined exclusively for modern-day hotel use requires an audacious, balanced, almost ascetic interior design, which respects the construction’s various historical substrata, yet without replicating these various layers, and so honouring them with its new, counterpoised character and maximising their use. The interior designer, Francesc Rifé, is the expert who provided the building with its new personality.

Recipient of the interior design award Premio FAD de Interiorismo 2009 and with an insatiable appetite for further challenges, he has created a unique, inimitable atmosphere. He has endowed the Caro Hotel with its own soul, a meaningful personality of its very own. The silent dialogue between the stonework and the «Rifé aesthetic» lightens the spaces and imbues them with a sobriety, a linearity and congruity which allow the winds of time to blow through the rooms without ever renouncing their twenty-first century ethos.

Situated in a building declared Heritage of Cultural Interest (BIC), the Caro Hotel is the first historical monument-hotel in Valencia.

It contains just 26 rooms situated on four floors, and are categorised in double, superior and special. Also contains two suites: The Arabic Tower and The Marquis Suite.

Rooms defined by their contemporary, geometric, minimalist interior design. They are the ultimate example of the style developed by Francesc Rifé for the hotel, based on spatial order and their continuity of materials. They are light, quiet and located with views over the private palace patio or the glass roof feature which covers the restaurant and other furnishings and illumination features specially designed for this project.

The Arabic Tower is the only junior suite in the Caro Hotel. A split-level construction on the same floor as one of the watchtowers adjacent to the city’s Arabic wall, it preserves both the arches providing access to these towers and the beams and joists used in the nineteenth-century renovation project intact. Moreover, its contemporary interior design, its light and its ample dimensions confer an emblematic status.”

The MUS, a Contemporary Modular Sofa by Francesc Rifé

Stylish Hotel Located in Tbilisi, Georgia with a Sleek and Sophisticated Interior

Spectacular Hotel in the Vibrant City of Madrid, Spain