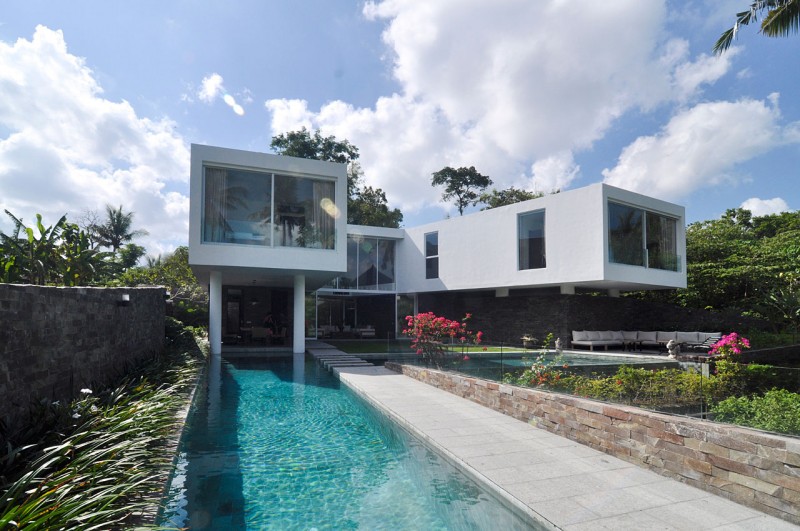 “Mencke & Vagnby have, in co-operation with architect Peter Sand, completed a villa in Bali, combining Scandinavian traditions with the openness and materials traditional to Bali.

The villa is called Ashoka Canggu and is designed as a summer residence for a Hong Kong based couple. It is located in the small Canggu village, one hour drive north west of Denpasar.

The ground floor has an open plan and in close contact with the garden and pools, while keeping a scenic view over the rice paddies to the west. A surrounding wall of Balinese stone continues inside and becomes the main structure, to further blur the boundaries between indoors and outdoors. The same applies to the stone floor, which only changes surface structure from a rough surface around the pools to a slight matt indoor surface. All done to obtain the openness so typical for Balinese homes.

In contrast to the openness of the ground floor, the first floor box is kept in white concrete, reflecting the sunlight and providing shade for the ground floor, while it contains the three master bedrooms. The bathrooms are inspired by caves and also kept in a local stone with a large sky window over the shower and bathtub.

The garden is designed to make the flowers match the Balinese traditional color palette and unfurls this spectrum through the different areas of the garden.”

5 Star Viceroy Bali Resort in the Valley of the Kings