The house was built in 2011 and features an impressive system of stacked concrete blocks. 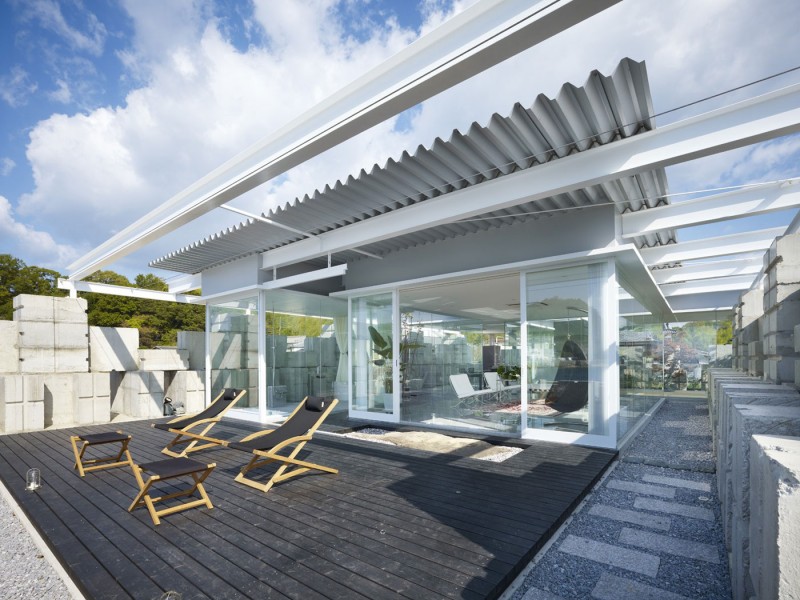 “This building is based on a simple system of stacking large concrete blocks of 1.0 m x 1.0 m x 1.5m like building blocks on top of one another to make a structure with big undulation like breakwater or wave-dissipating blocks. These large concrete blocks are manufactured at any cement factory in Etajima city, Hiroshima, at a very low price as excess cement is reused and often used for surface of retaining wall or anchors of rafts for cultured oysters. These large concrete blocks are manufactured from leftover concrete whenever there is an order of concrete at cement factory, as there will always be a surplus, and sold as a product instead of discarding.

Groove is cut on the surface of these blocks to have them lifted by cranes. By stacking blocks to make vertical line of this groove, reinforcing steel can be placed through the blocks to secure quake resistance. This method of stacking is made standardized to give variation of direction and intervals; at a place giving view and making passage of the wind and at another place securing the privacy.

Overall composition of the building consists of roof and transparent glass to enclose interior space with the aforementioned concrete block structure. There is no roof over the concrete blocks. Therefore rays of the sun pour over the blocks, and the reflection of the light shines inside the house. Furthermore, vines of various flowers will be planted along the block, changing breakwater-like structure to a hill of flower and greenery in the future.

Mass of stacked large concrete blocks is far too enormous as a structure of a building, and the silhouette is far from ordinary. The building also has a function of landscape which controls wind, light and green, leading these factors interior and giving freedom to the interior space which exceed the form of conventional architecture.”

2 Comments to Glass House by NAF Architect and Design