Seoul-based studio BANG by MIN has completed in 2011 the remodeling of the French restaurant La Ville de Pins in Gangnam-gu, one of the most affluent areas of Seoul, South Korea. 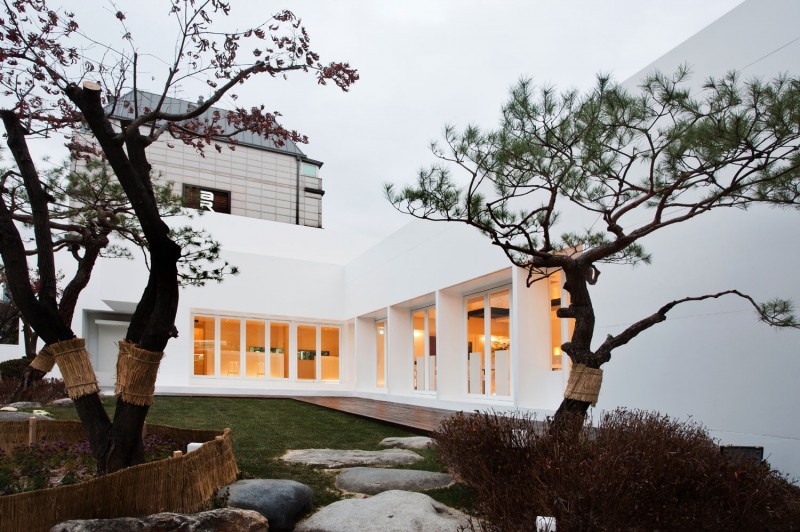 “‘La Ville de Pins’ is a French Restaurant Remodeling project in Sinsa-dong, Gangnam-gu, which is the hottest district at metropolitan area in the city of Seoul, Korea.

‘La Ville de Pins’ means a pine village in French. A pine village is situated in the heart of Gangnam in Seoul. This building boasts of its white figure among the surrounding monotone buildings. It looks like an isolate island and also looks remarkable through the inter-space of alley. The space composition of this building reflects the client’s wish to make customers experience French dinner easily without any burdens. Its space concept also reflects the new food culture named ‘Le Fooding’ on its center. Fooding is a compound word of ‘Food’ and ‘Feeling’, and tells the whole feeling produced by the combination of food, style and atmosphere. La Ville de Pins provides Le Fooding in order that the customers can enjoy French food in the more casual and popular atmosphere.

This two-story brick building had built in 1980s. The most important thing in remodeling this old building was to create a space harmonious with the surroundings and to attract the eyes. I thought that the conciseness might tell the message more strongly in the age when the extraordinary designs are rampant formatively and visually. Therefore, I designed this space only with white color and shapes of extremely moderated straight line on the whole.

I also wanted to express the spatial harmony of East and West. I think Eastern spaces follow the world of harmony and have the more delicate components, while the Western spaces follow that of control and order. I wanted Korea and France with the concepts different from each other to strike the balance between them and to be one as another world. I created a story of this space by making the sequence of spatial components and expressing the concept with design. In particular, I arranged pine garden, cafe and restaurant in shape of ‘L’, through which people inside can look out, and people outside can look in. New scenery becomes to flow successively in the interior space.

It is said that spaces of Korea are the culture of ‘room’. Korean intend to form the intimacy in the closed space rather than the wide open space. I attempted to create such a space of Korea at this project. I divided the spaces naturally by differentiating their levels even on the same floor. Outside garden, white cafe on the first floor, orange&purple area, and restaurant for small meeting on the second floor are divided by the differentiated levels. The differentiation of levels produced the sequence of space.

White color to dominate the whole space is moderate and concise, and makes some emptiness. The emptiness of this space becomes the background filled with people’s figures and behaviors. The golden, orange and purple mosaic tiles symbolize the programs of this space against the white color. Golden area more public than other areas becomes a cafe for diverse uses and accesses. Orange area is the neutral semi-public space, and purple area is the most private space. On the second floor, natural wood and black chandelier show the programs different from those of the first floor.”

H-House by BANG by MIN

Restaurant Alice in Wonderland in Tokyo by Fantastic Design Works

An Old Textile Factory Turned Into a Fantastic Restaurant in Mexico.

The Cracked House in Seoul by Mass Studies