House in Lemesos by Skinotechniki

Cypriot architect George Papadopoulos, founder of Skinotechniki, has completed the design of his own home, House in Lemesos, Cyprus. 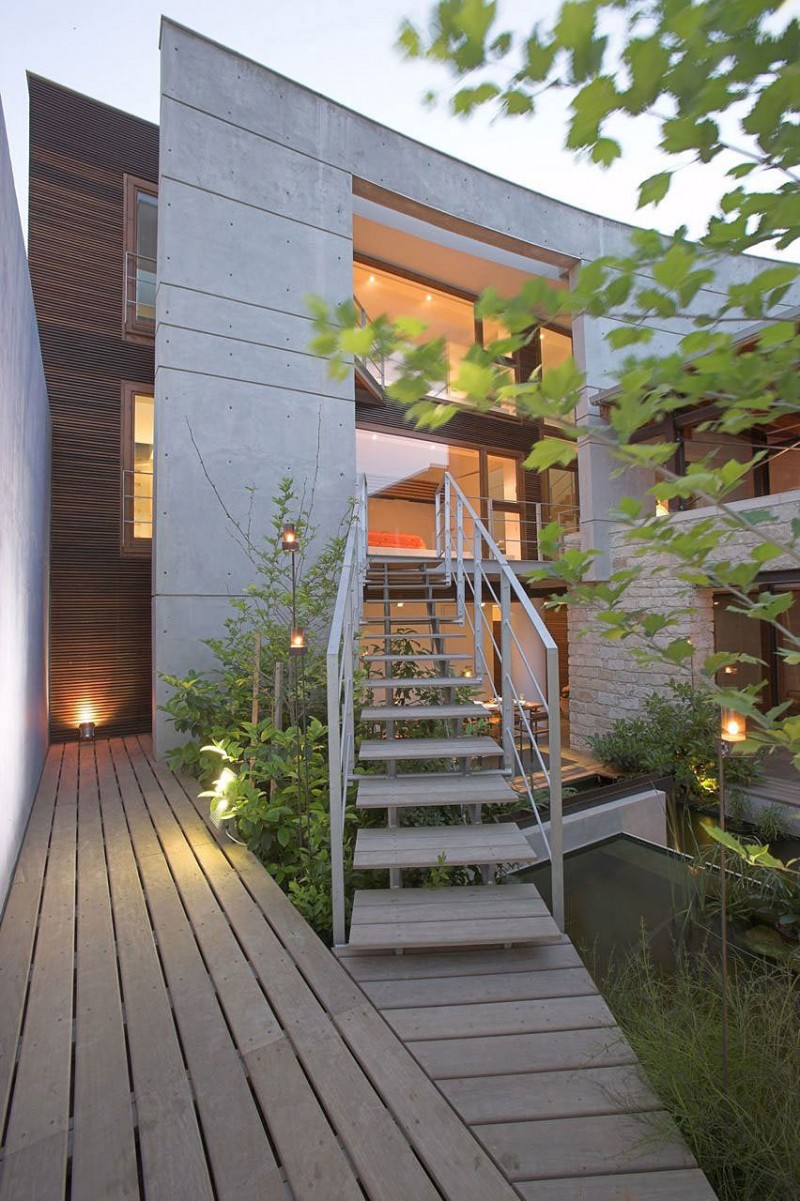 House in Lemesos by George Papadopoulos of Sinotechniki:

The house is built between two narrow streets in the old part of the town of Lemesos, about 50m from one of the most popular stretches of sandy beach in Cyprus, and just down the road from the house I grew up. The site was previously occupied by an old carob mill that burnt down in a fire in 1989, leaving only the ruins of the stone walls.

The aim was to create a family home for me, my wife, and our four boys. For convenience and privacy, we wanted our place of work to be within the same plot but to have a separate entrance. The building had to fit into it’s surrounding environment of both traditional two storey stone and adobe single family dwellings, and some small old industrial buildings. At the same time it had to be modern, learning from traditional architecture but not copying it. Towards my aim of creating a coherent and safe environment for my family, I drew ideas from my own childhood memories of playing under huge plane trees in a house next to a mountain stream.

Last but not least, I wanted to apply ecological solutions to heating, cooling, lighting and water management.

Most rooms in the house face the partly covered internal courtyard. This is a traditional way of building in Cyprus helping to keep the family together and safeguard the privacy of the occupants.

A neoclassical proportional system that relates to human scale, is applied to both interior and exterior surfaces and can be seen in plan, elevation and section.

Like music, Architecture needs to touch our senses. To do this, opposites need to be combined. In music is quick/slow, melodic/rock. In architecture, is open/enclosed, dark/brightly lid, hot/cold, hard-soft, heavy-light. Is these opposites that wake up our senses and give us a sense of belonging. The house is full of these opposites.

Walls are 55-75cm thick, made out of aerated concrete blocks, with thermal resistance well beyond that of the traditional adobe wall. In Lemesos, the energy requirement of a modern building for cooling alone is 70% of the total energy consumed. The house does not have a conventional cooling system. It is cooled by a combination of elements. Traditional ceiling fans. Shaded roof windows and a hallway rising up three storeys, draw hot air out using the stack effect principle. Large plane trees in the internal garden and correct building orientation, give shade. The water from the fish ponds and pool that cover the 65% of the internal garden area, evaporates providing additional cooling.

At night the cooler air from the mountains sinks through the open roof lights. The main bedroom has it’s own special cooling system. A geothermic system where using a small fan, air is drawn from the bedroom through 30cm diameter pipe buried underground. The air comes back in the room providing a comfortable temperature. The children’s bedrooms face west and could have been very hot at night. This is not so because they are constructed of lightweight materials -steel and wood- that do not store and therefore emit heat back into the room. This idea is taken from traditional Lemesos houses which had a room, usually on the first floor, built of lightweight materials and used for sleeping in the hot summer nights. Heating is achieved using a diesel boiler. This is assisted with 8 racks by 20 solar heated vacuum tubes, that heat the living room under-floor heating system.

All I Own House by PKMN Architectures

Ground and above Roof House by SpaceSpace