Perched on a slope overlooking the ocean in Sydney, Australia, this modern residence by Chris Elliott Architects is a marriage of bold and demure.

The basement grotto is brightly colored while the rest of the house maintains a more subdued palate.

Seacliff House was designed to house a family of four and was completed in 2007. 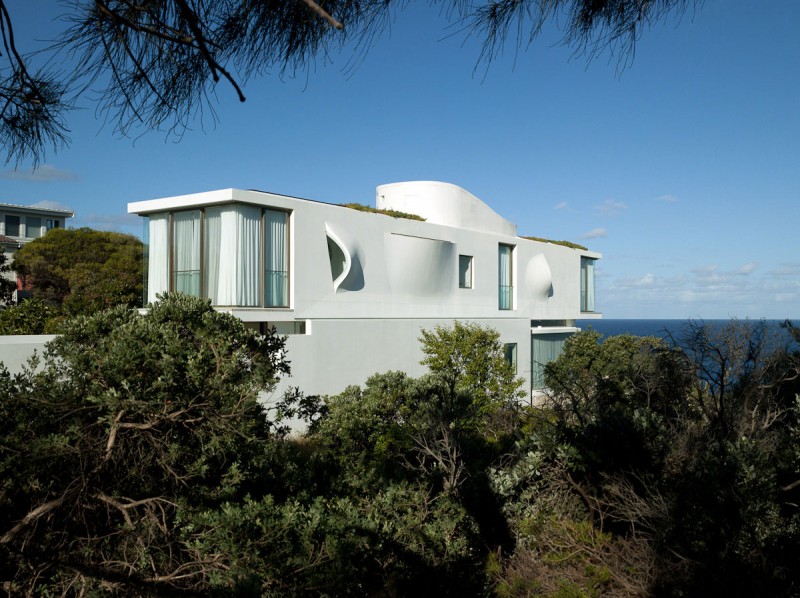 “After numerous explorations and sketches it was decided to go with the peculiarities of the site rather than struggle against them. So, a long linear element sits above a row of columns, providing privacy and protection and the upper level whilst allowing the ground level to be open and very transparent. Cantilevers at each end of the linear element allow for the requisite space at bedroom level while simultaneously freeing up space and providing cover for outdoor areas below.

Structurally, a long concrete box (the bedroom level) sits atop a series of concrete columns that run from the basement up through the living level. The walls at ground level are mainly glass – influenced but not controlled by the rigour of the structural system, rather, they are allowed to curve and weave in and out to respond to site constraints and opportunities at various points around the perimeter. A compact solid core provides stability and contains a stair, bathroom, fridge, cupboards and pantry whilst creating only a minimal visual obstruction.
The ground floor is conceptually a transparent platform. Nature is welcomed in and not excluded. It is ordered by a series of columns and defined by solid walls only where necessary. Glass runs along, around and above the solid elements while large sliding and pivoting glass doors open to outside.

The basement level is conceived as a grotto combining water, rock and light. The solid sandstone foundation stone is carved away to create space. Rather than remove all material as is often done, in various places it is left to invade the space thus connecting in an intimate way the house to the very essence of Sydney – its sandstone base. Water occurs at various levels – a pool, a shallow reflecting pool with bridge and an outdoor bath. At times strong shafts of light penetrate the spaces, as through rock fissures in a cave. At other times when light levels are low strong colours help to create warmth and atmosphere.

The bedroom level, a long linear box is conceptually a protective cocoon, providing comfort and privacy with glimpses out through a variety of openings, with the option of one or two layers of curtains-the first opaque, and the second a translucent veil. On the outside the surface of the box is enlivened with series of curvilinear light scoops. These allow light in and offer selective views out, such as a view of the sky when lying in the bath.

At the roof level, conceived as a belvedere or lookout, a study opens onto a small deck. Here your journey ends with a panoramic outlook over the ocean. A private sundeck with built in timber seating and a fireplace provides a comfortable place to contemplate the ocean and the stars at night.”