This contemporary beach house provides a closeness to the outdoors, and employs eco-friendly technologies. It was completed in 2011. 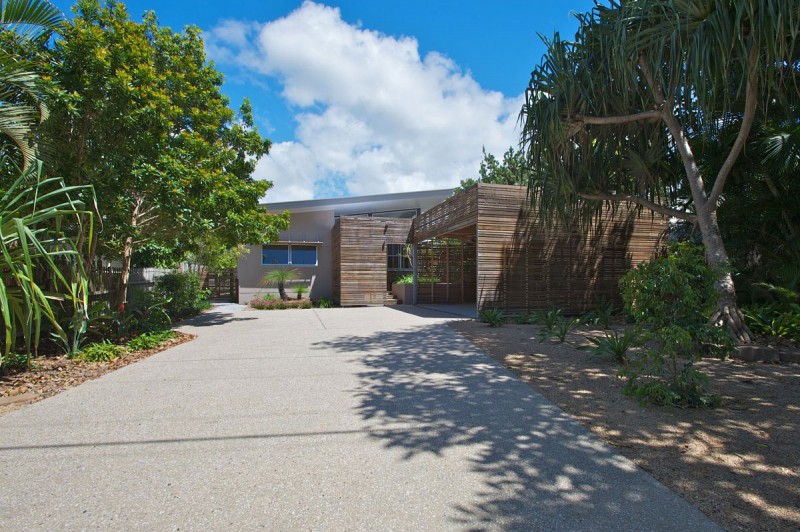 “The East House reconfigures an existing 1990s brick house to create a modern beachside residence with a very strong relationship to the coastal environment in which it is situated at Australia’s most easterly point. Primary motivations of the project included employing passive-solar design principles to achieve year-round comfort and energy performance, as well as establishing a home of rich experiential quality. Interlocking spatial ribbons realised via internal joinery, timber screening, and a thermal mass wall are deployed to create a series of overlapping, extensive spatial zones.

The East House is organised to strengthen the relationship between the occupant and the outdoor environment, thusly emphasizing the primacy of site and place. The clients are a professional couple who have lived in Byron Bay, New South Wales, for 10 years after relocating from Sydney. The house is designed to support their respective passions of yoga, surfing, cooking, music, and gardening.

The standard suburban block upon which the East House is built sits just across the street from a 10 mile long stretch of beach, and thusly one’s sense of place is always framed by sounds and winds emanating from the coast. The neighbourhood is well developed and establishing visual privacy to neighbours whilst maintaining openness to the environment was a key priority. The project is oriented with a long axis to the north for solar benefit, with a courtyard punctuating the connection to the outdoors.”