Completed in 1998, this traditional mediterranean dammuso house, parts of which are original ancient ruins, is located on the Island of Pantelleria, Italy. 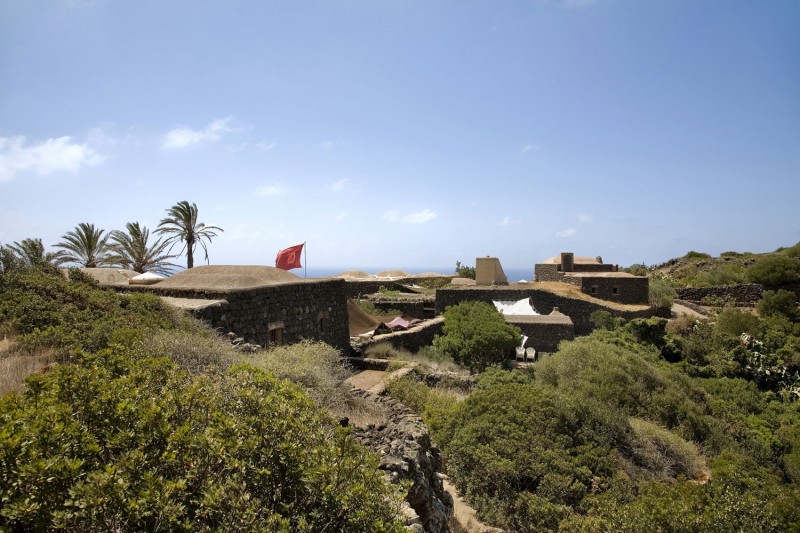 “Island of Pantelleria, Mediterranean, 12° Est 36°45’ North, 80 sq. Km: a pouring of lava, on the continental shelf of Africa, in the middle of the Sicilian Channel. Thirty miles from Tunisia. An agricultural complex containing a number of dammusi, the typical construction of the local agricultural population, built with double dry-masonry walls in lavic stone and obsidian (100 to 200 cm thick), interspaces filled with rubble (“casciata”): the internal wall supports the vault, the external wall functions as a buttress; a rugged landscape, with severe level variations, each marked by e wall; Mediterranean vegetation (grapevines, olives, holm oaks and prickly pear cacti).

On the pre-existing dammusi, which were partially ruined, a series of new spaces have been built using the original construction techniques, concatenated around a volume with an apse, with a vaulted roof (height 4.5 m), organized around a sequence of enclosed courtyards that can be used in the summer. The compact character of this allusive village is contrasted by the openness, defined by a simple stucco wall, of the swimming pool, whose border marks the profile of the sea.

A succession of material identifies the interior: bare stone indicates pre-existing elements. A long pathway in tufa, bordered by a stone wall, leads to e depression 16 metres below the level of the house. At the centre of this volcanic depression, terraces have been built to create an open-air theatre.”