The design and architecture firm James & Mau is behind this environmentally friendly weekend home in Reus, Spain.

It was constructed in 2011 and  features a passive solar design, natural ventilation, and a rather unusual floral motif cut into its Corten steel shutters. 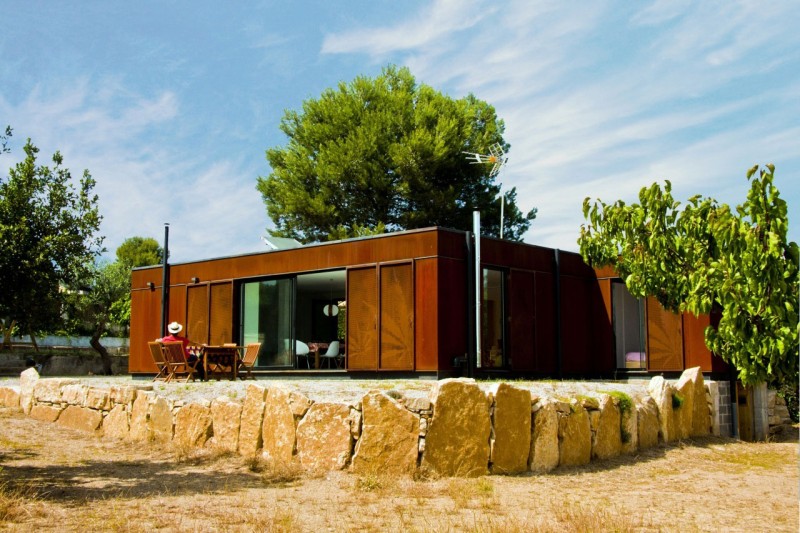 “The house of 100m2 is designed in the shape of a cube organized on one level, including a central living area with an open kitchen, 2 rooms and a common bathroom.

Located in the country side of the Tarragona Province, the project was thought of as a weekend house, which needed to be easy to use, efficient and which would take full advantage of its natural surroundings. The house was designed as a “living Box” which can be “opened”, “closed”, “switched on” “heated”, “cooled down” efficiently, easily and rapidly. The house is designed as a cube ‐ rational and functional ‐ where the transition between exterior and interior areas is as fluid as possible.

The façade system uses Corten Steel panels which create an eye‐catching contrast with its natural surroundings. The shutters play an important role both for the aesthetic value of the house and its energetic efficiency. The Shutters, which are completely integrated within the façade, use perforated panels of Corten Steel.

The panels are perforated with the shape of Mint leaves which project luminous forms in the interior during day and in the exterior at night, a little like a “light box”. Those perforated shutters, when closed also work as a solar protector allowing air and light to pass through.

The project relies on a bioclimatic architecture adapting the form and positioning of the house to its energetic needs: natural ventilation, passive solar design, intelligent façade system, natural shades etc.

Instead of using shipping containers, Infiniski decided to use 4 prefabricated (inhouse) metal modules. The house uses 3 modules (ISO transport) which serve as structure.

The walls are composed of an eco‐friendly insulation layer made of sheep wool, and cellulose panels. With the joint action of its bioclimatic design, the use of eco‐friendly building materials, the use of renewable energies ( in this case Biomass heating and solar panels) the house gains very high thermal efficiency and was recognized with the highest level of energetic efficiency (Certification A) by the Regional Institute of Energy ICAEN. This allows a reduction up to 60% of energetic consumption.

The Encanto Hotel by Taller Aragones