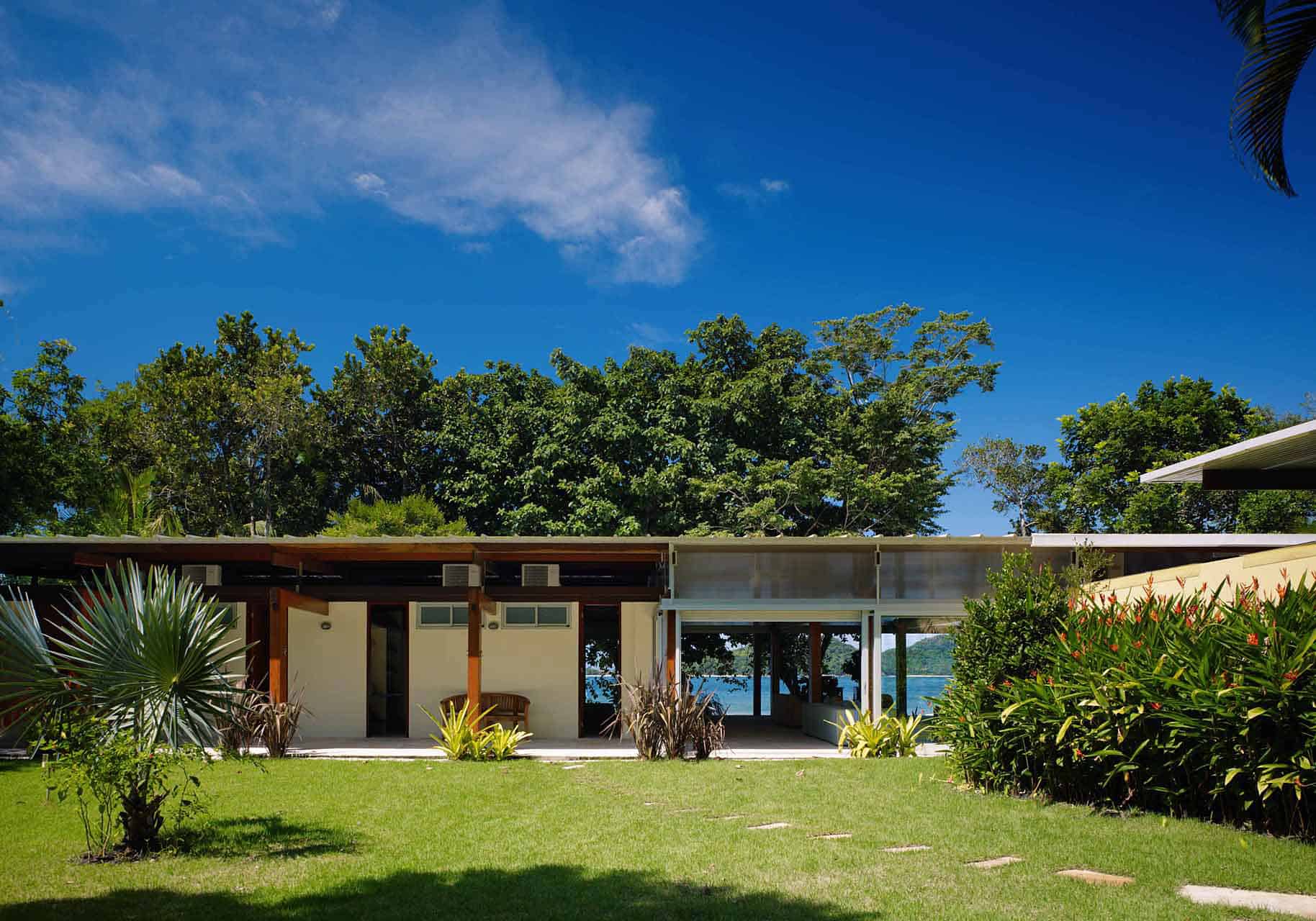 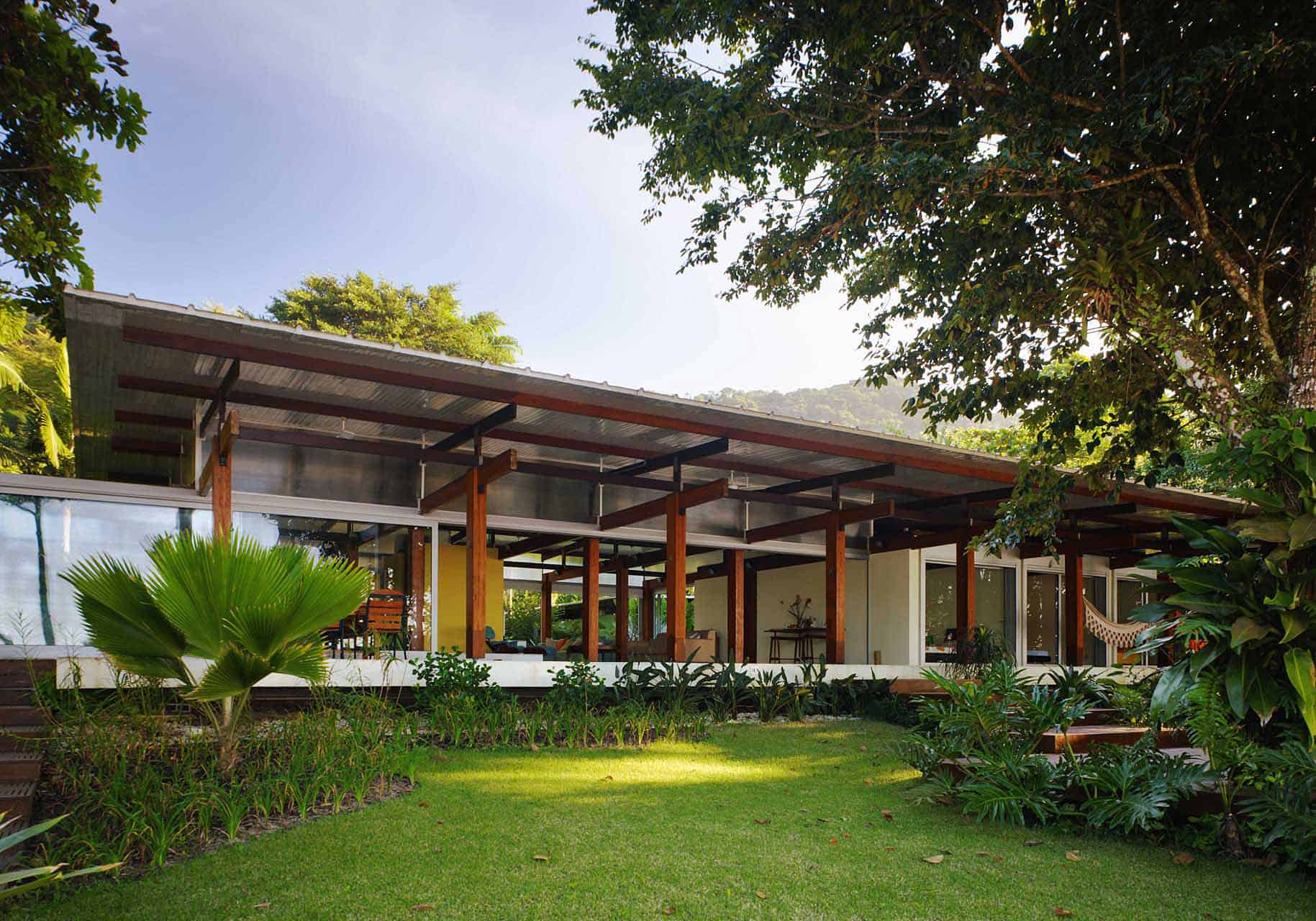 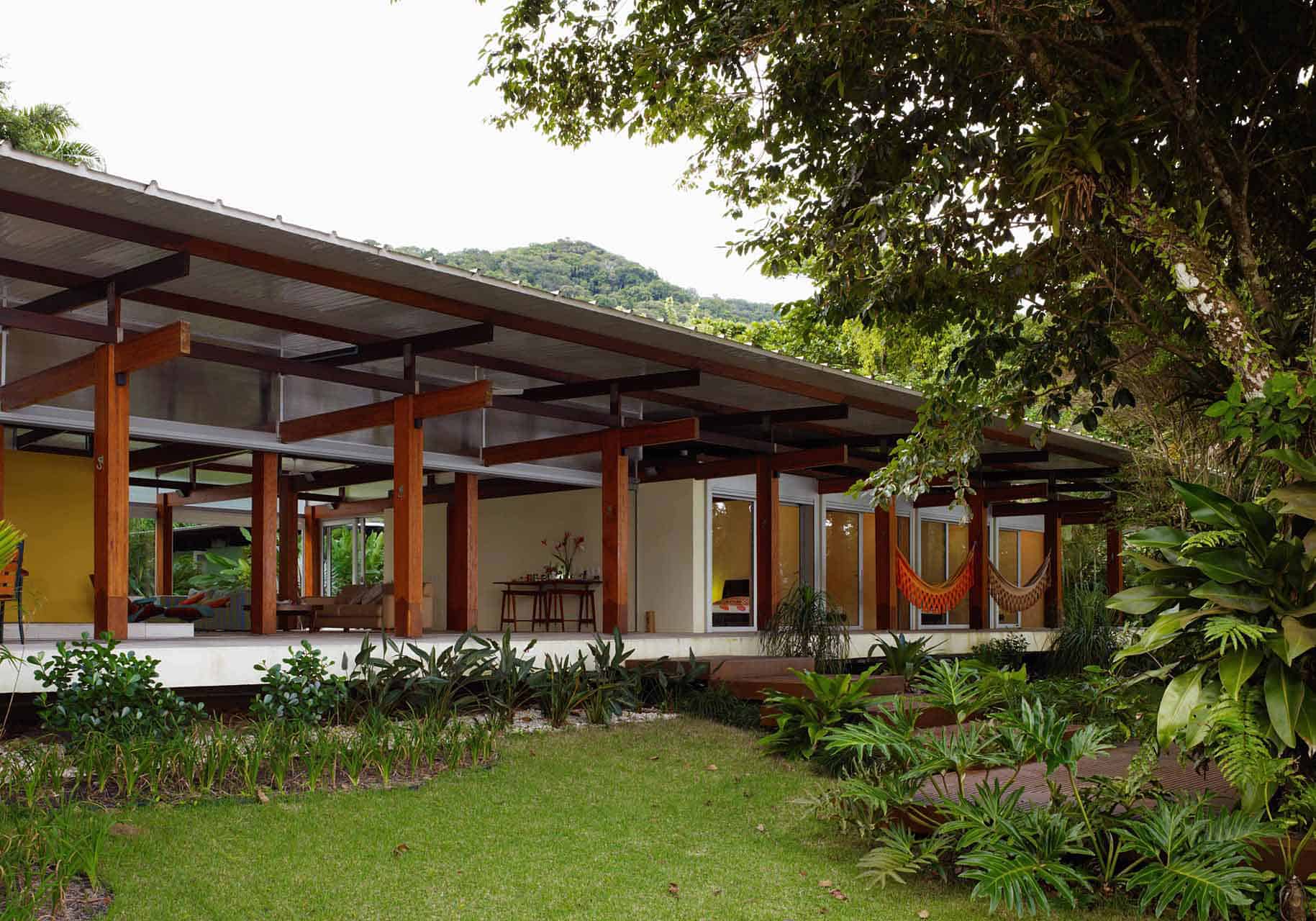 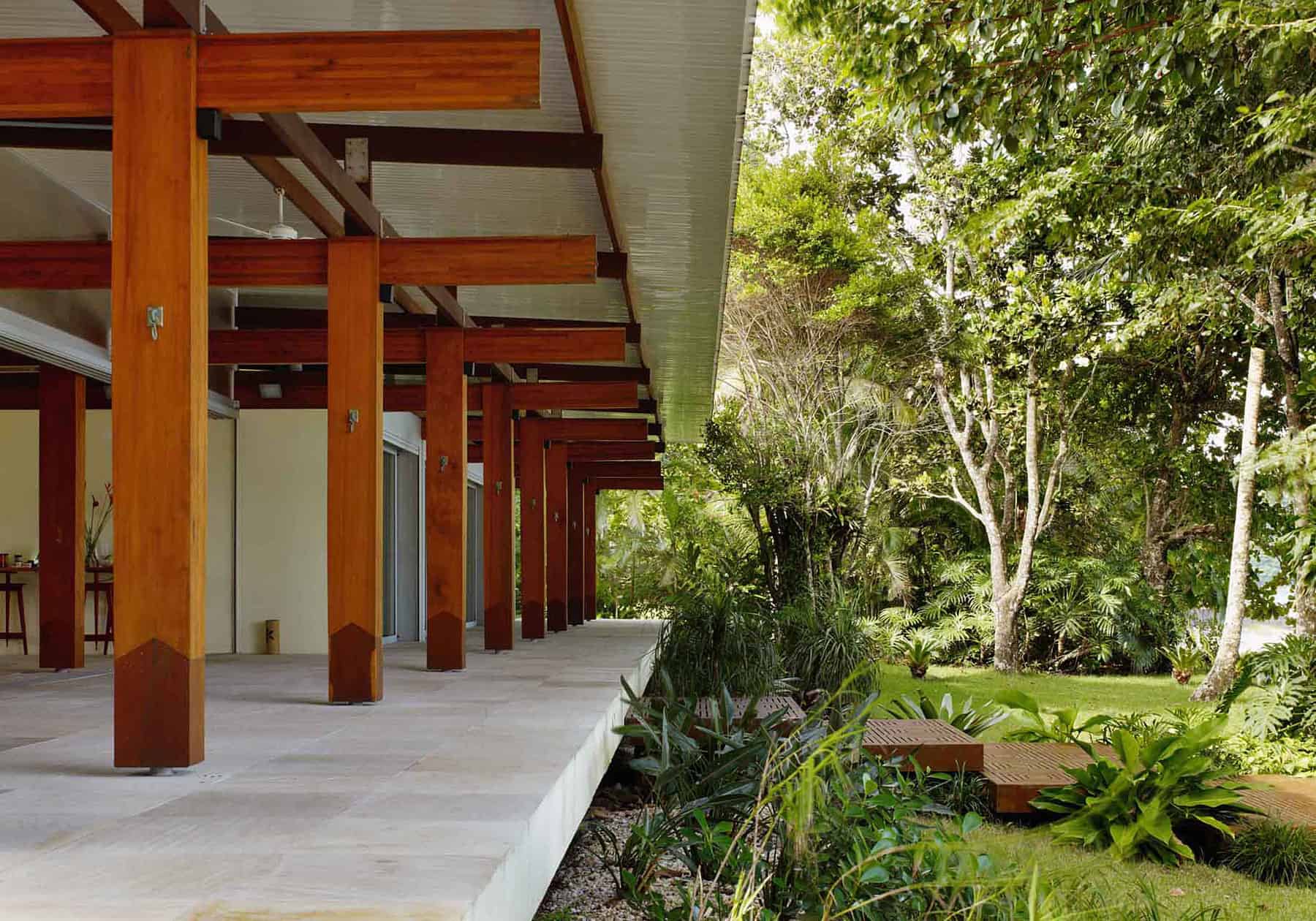 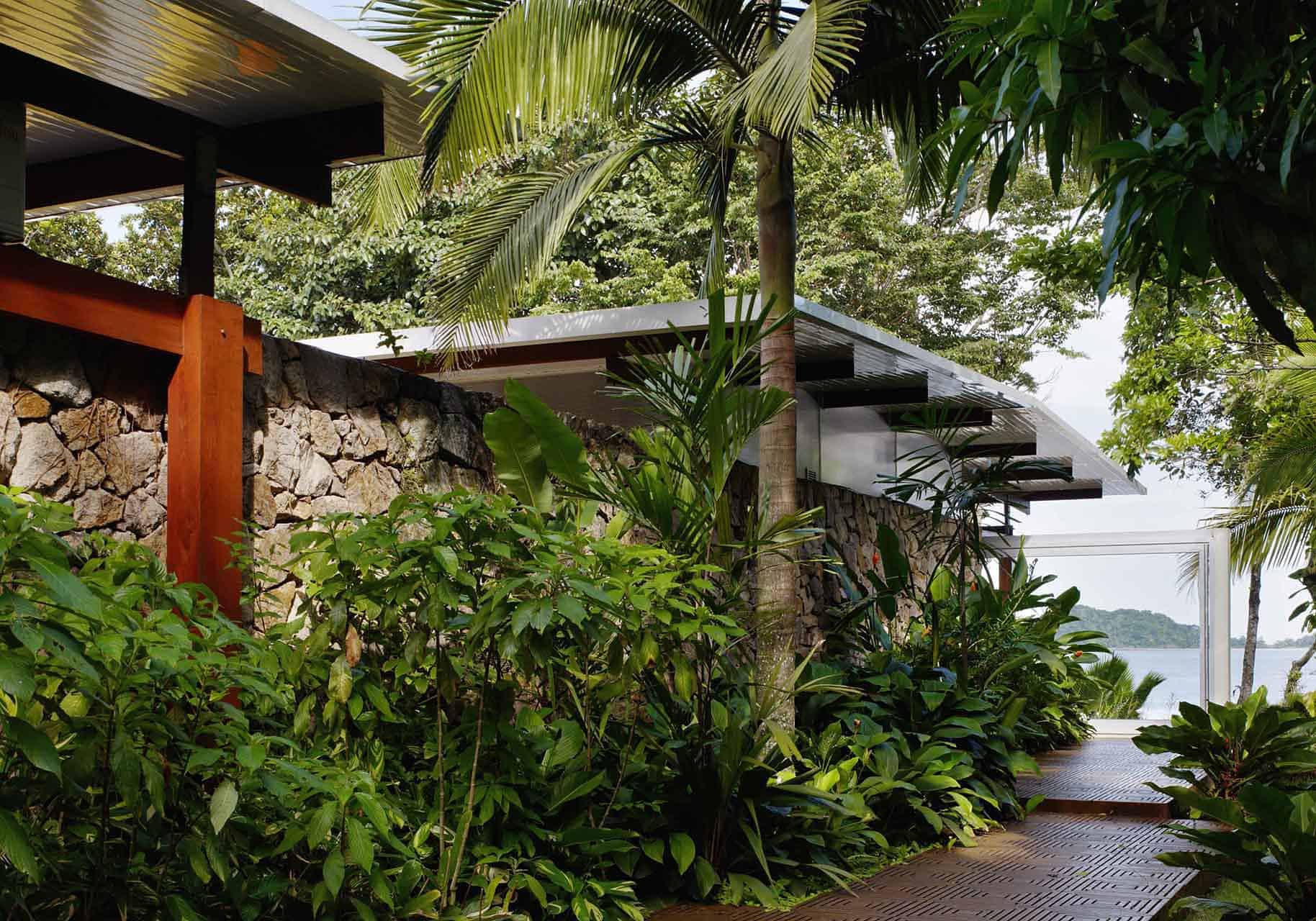 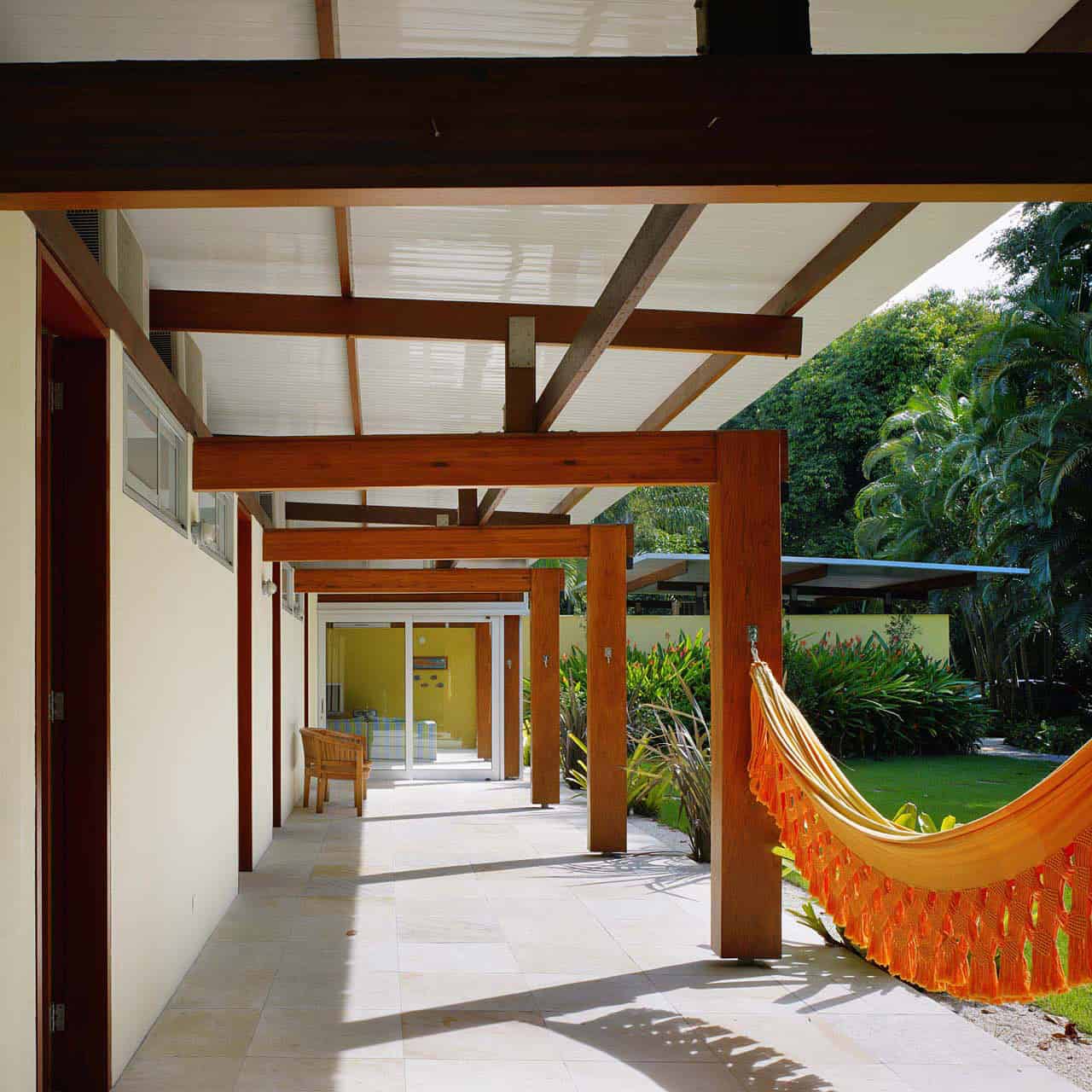 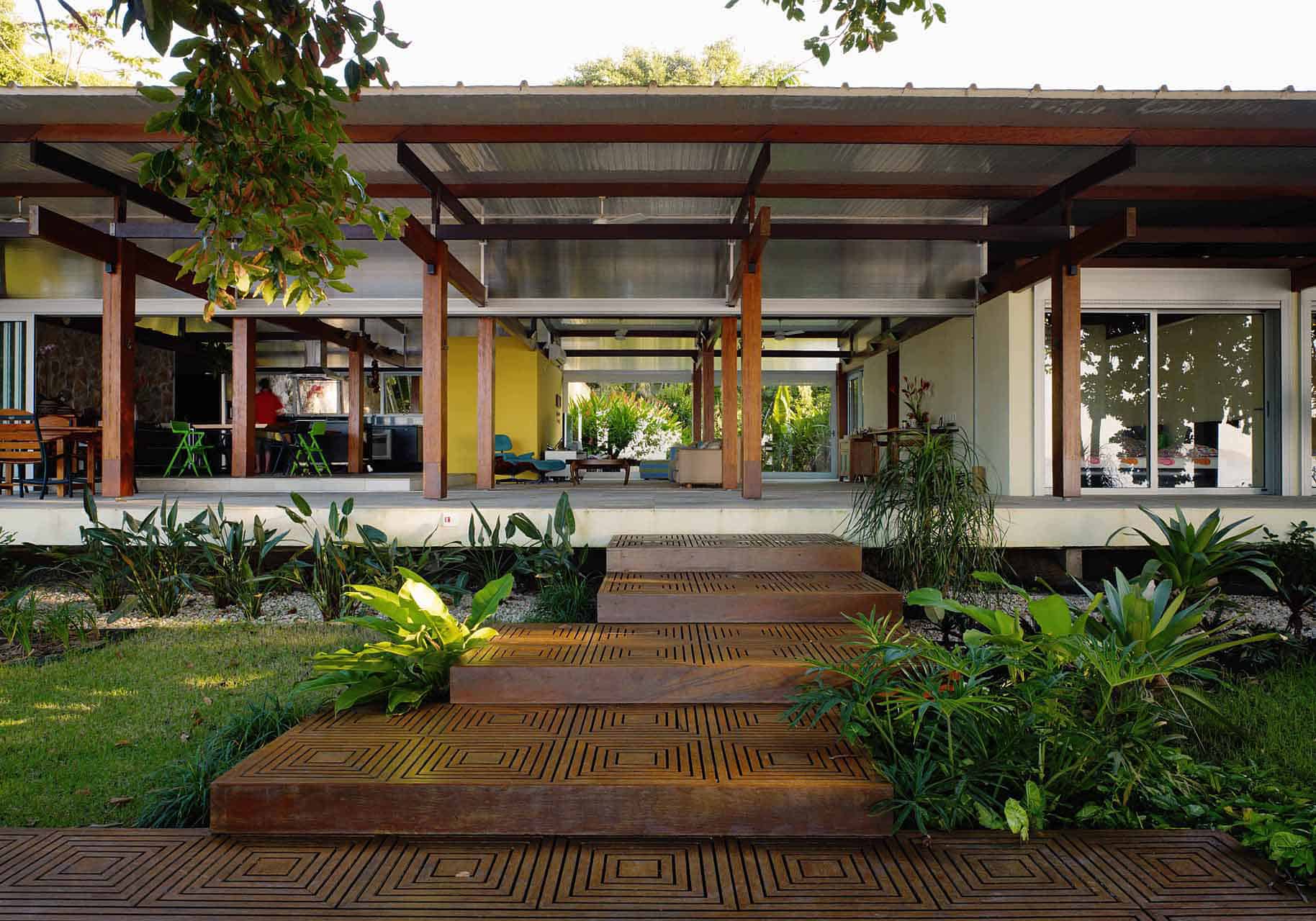 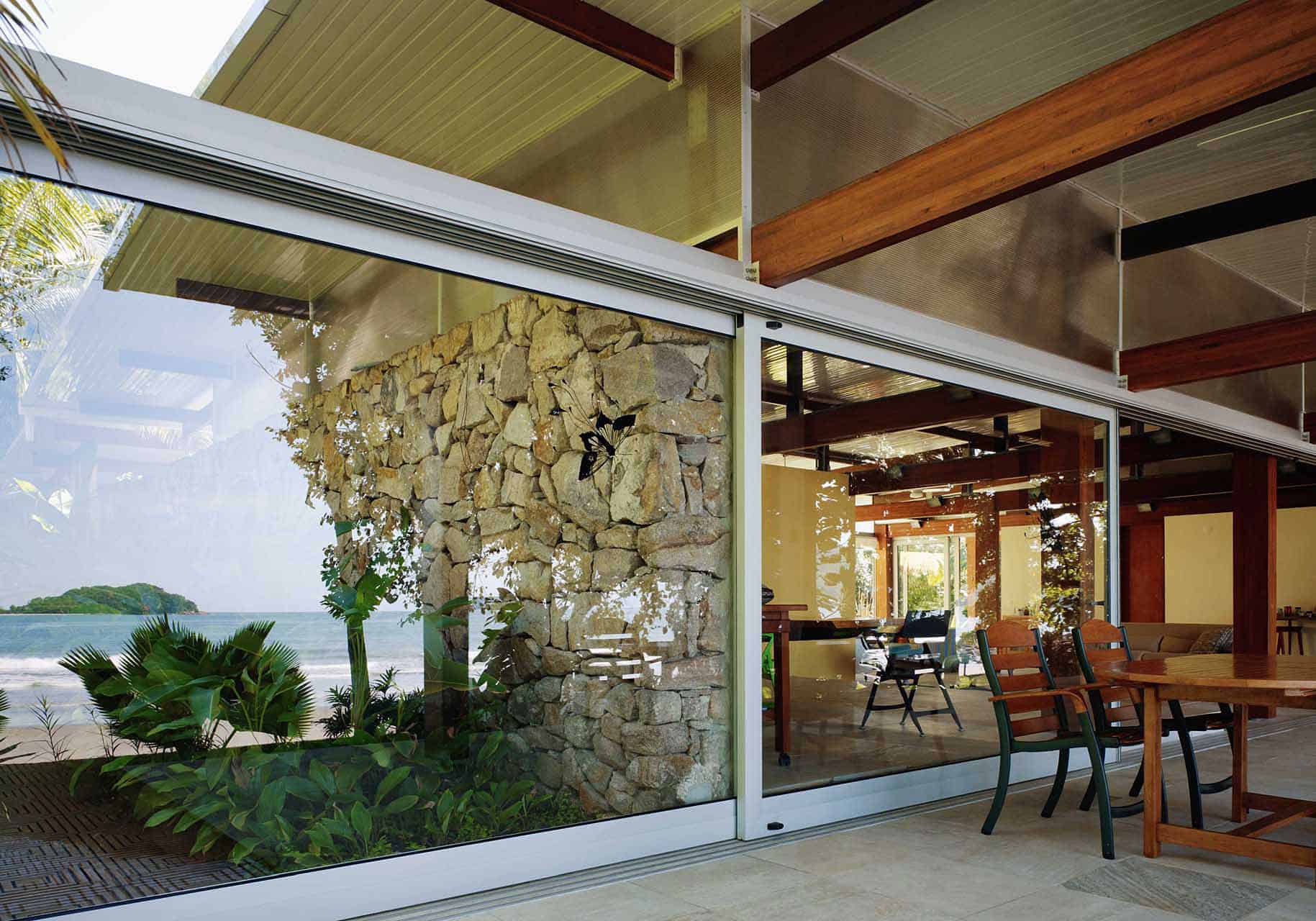 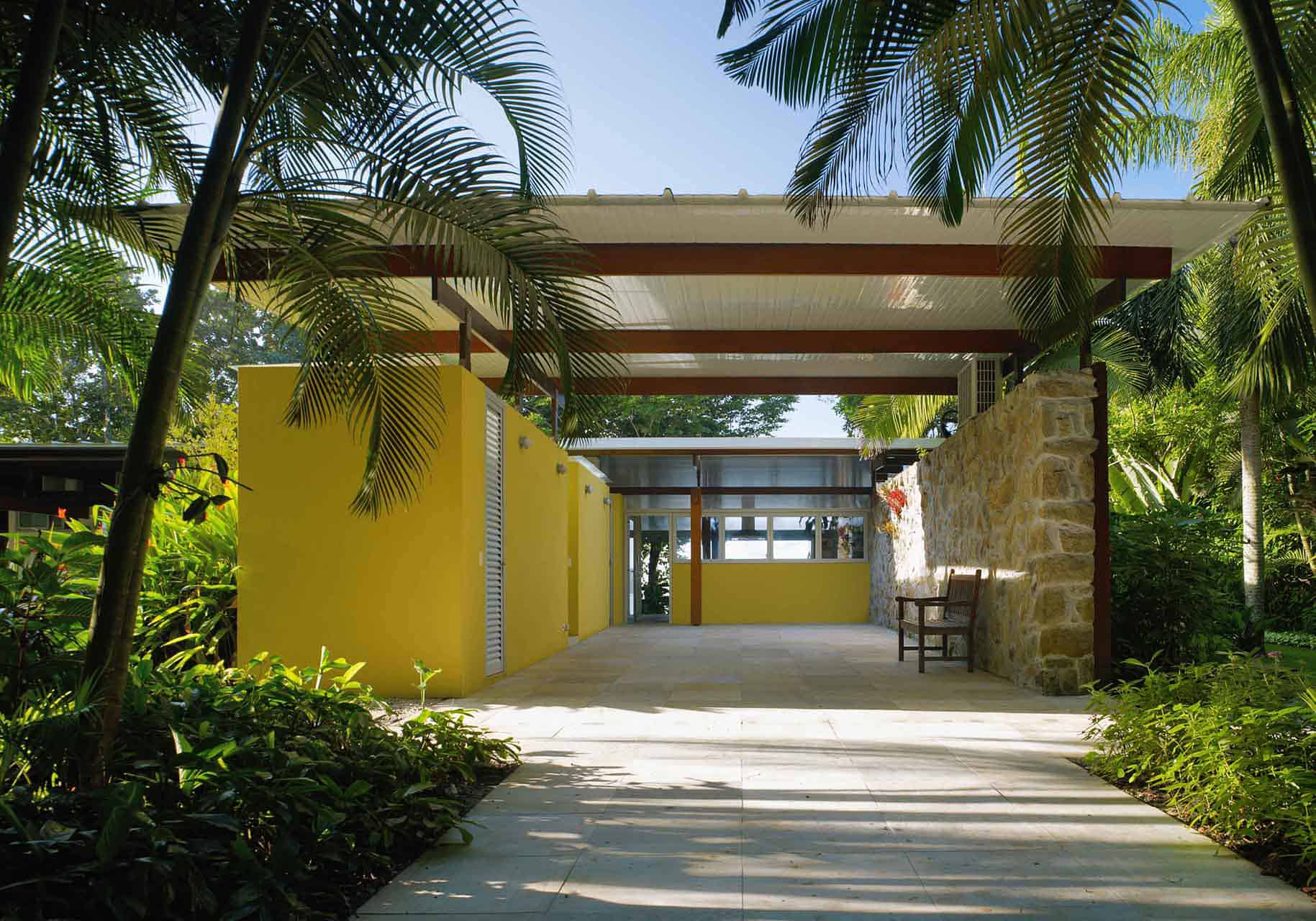 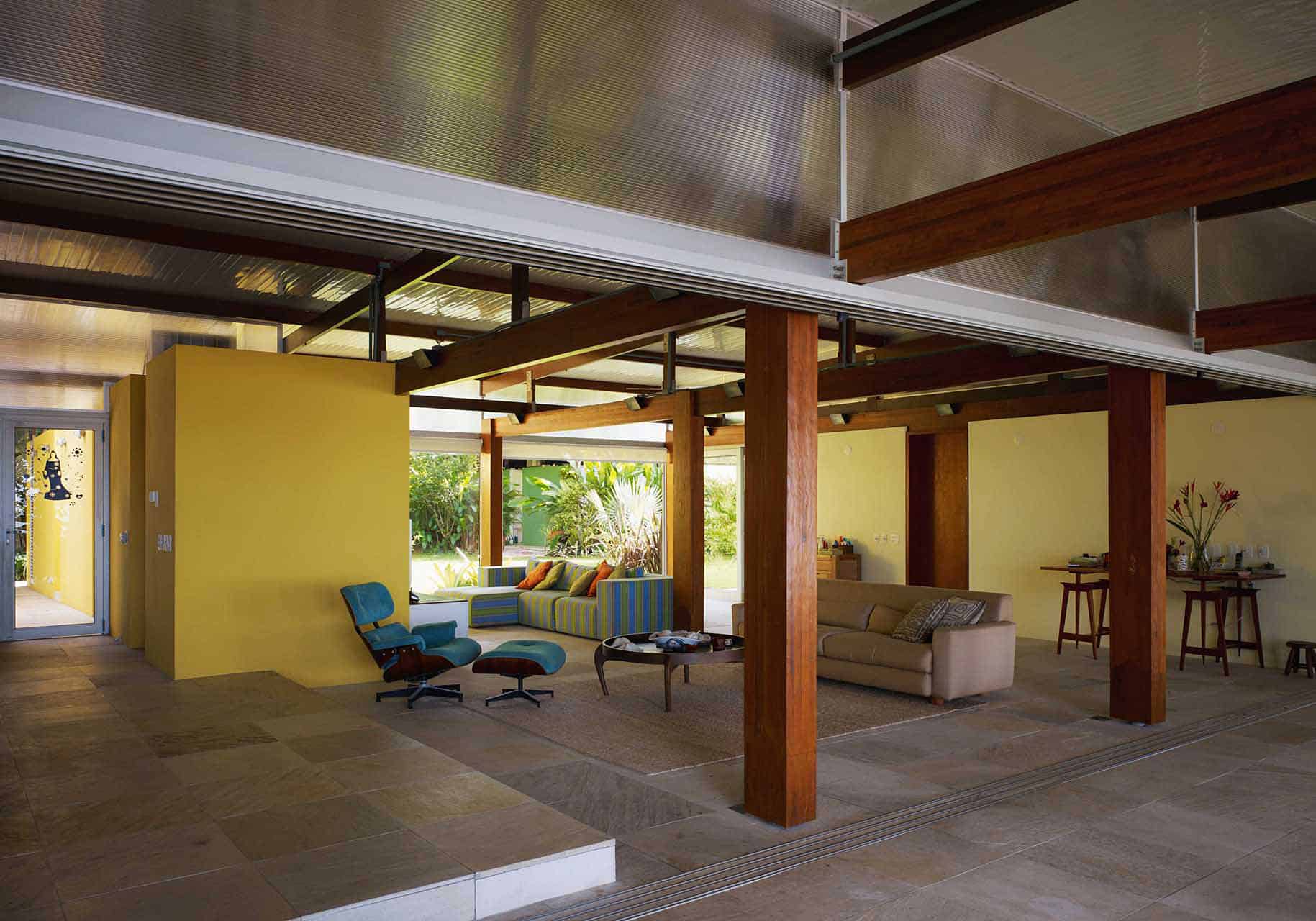 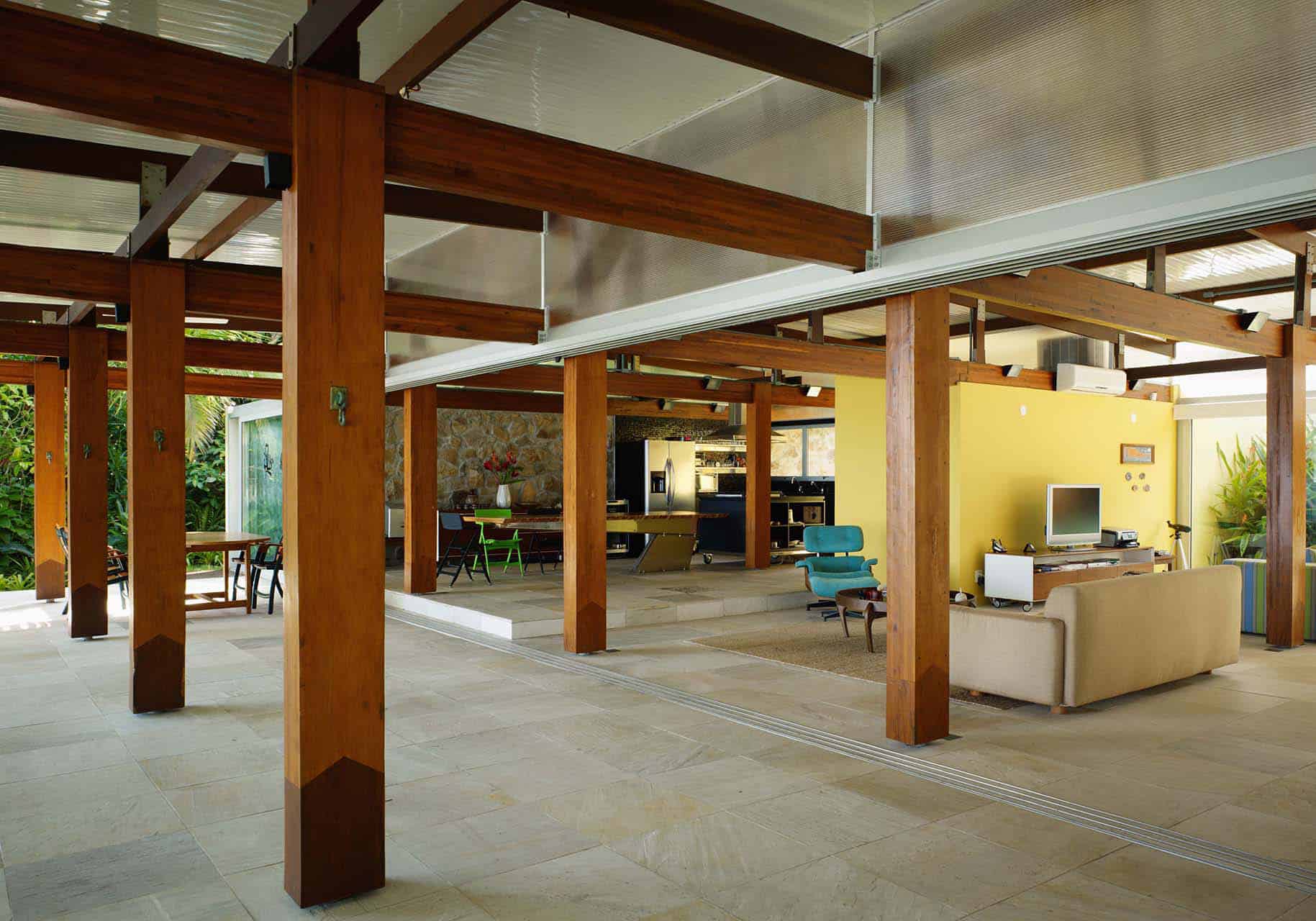 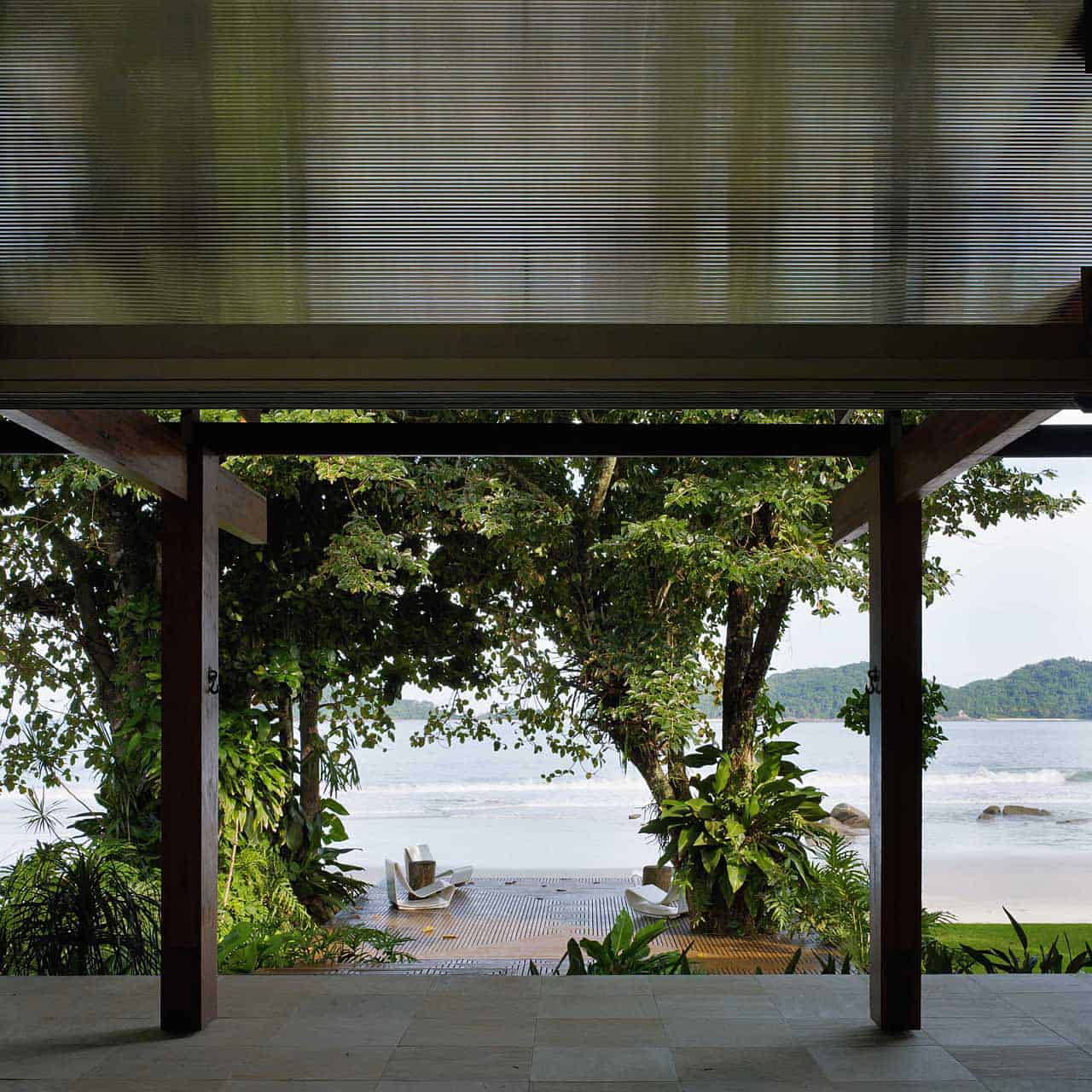 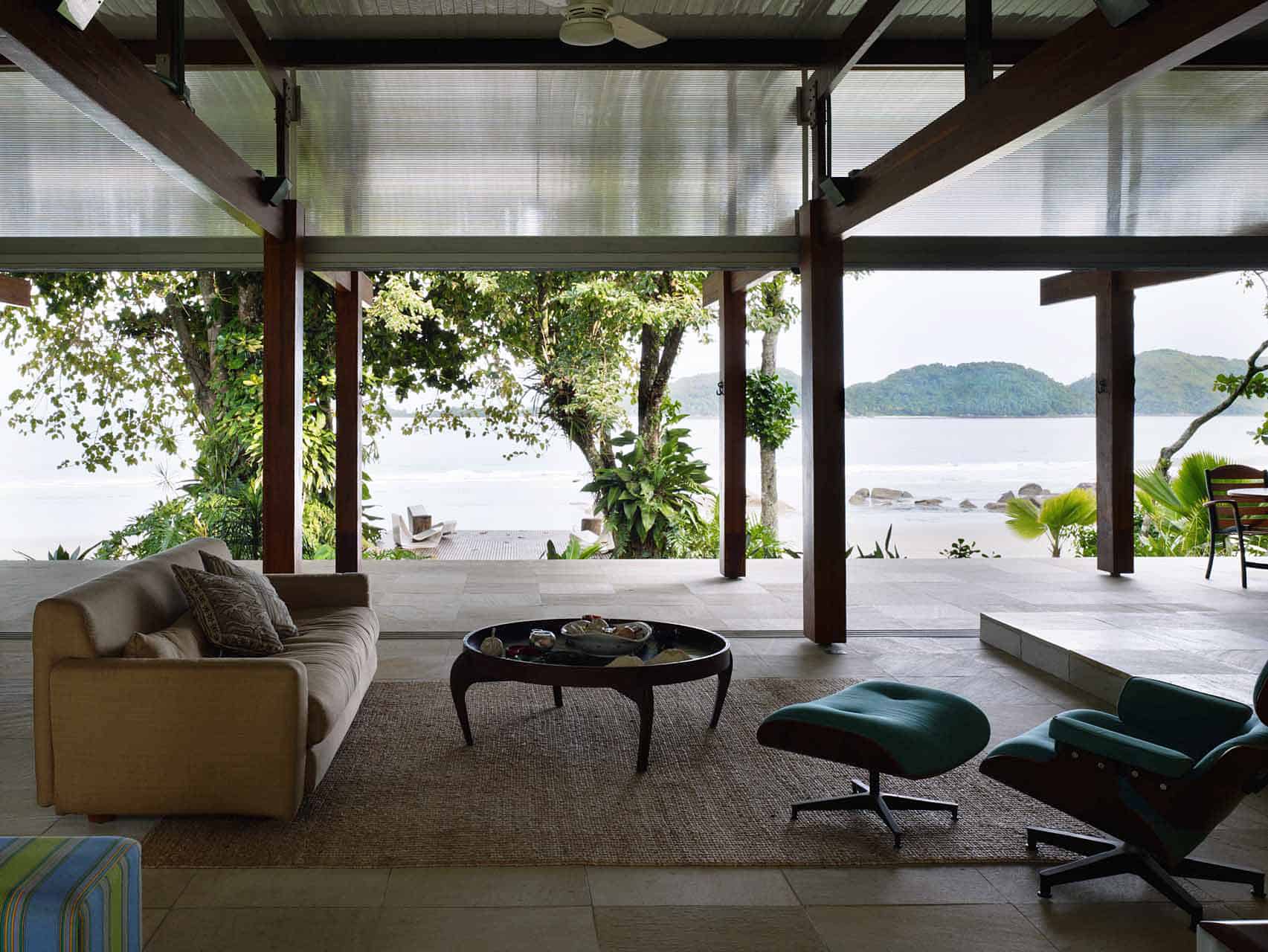 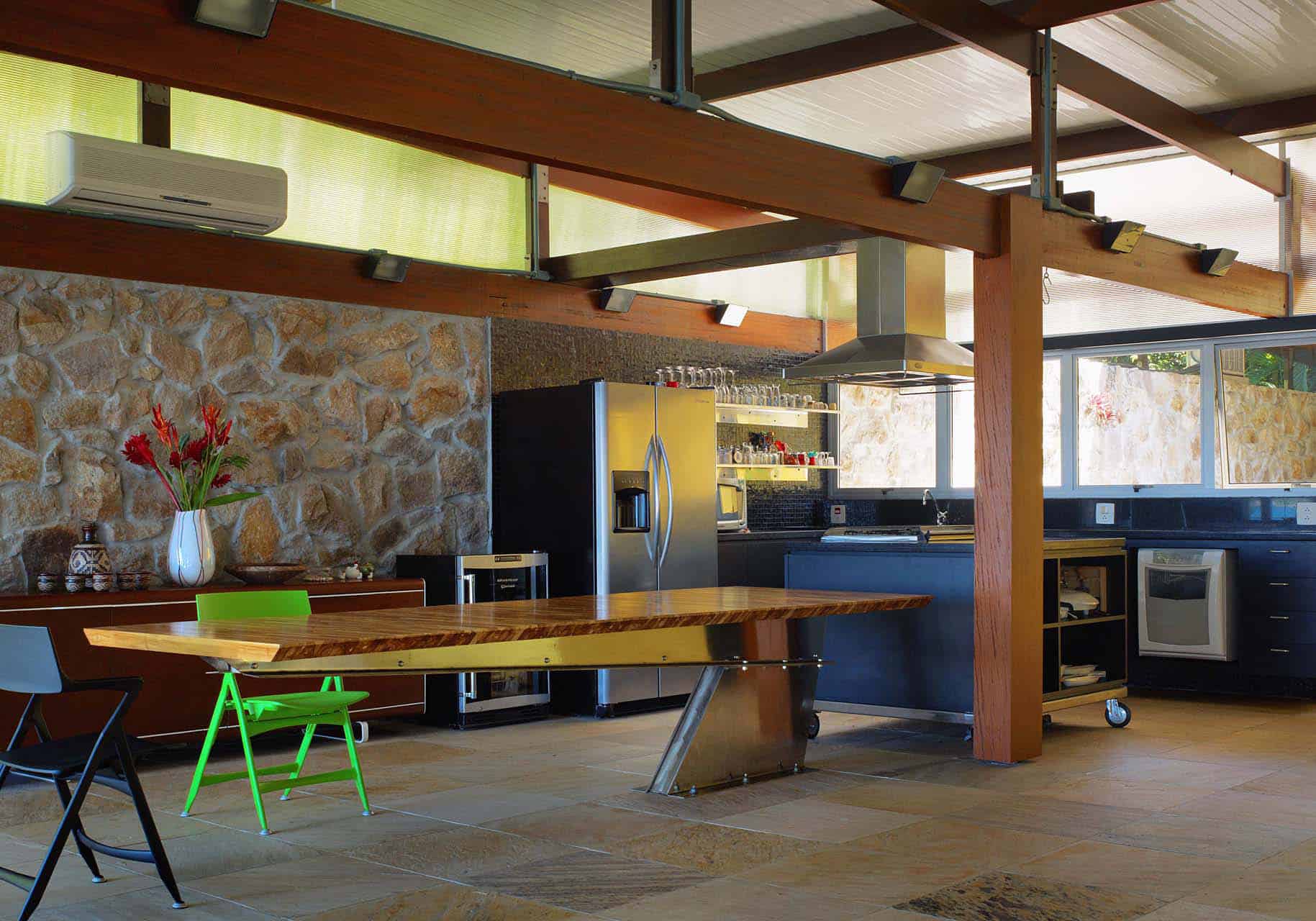 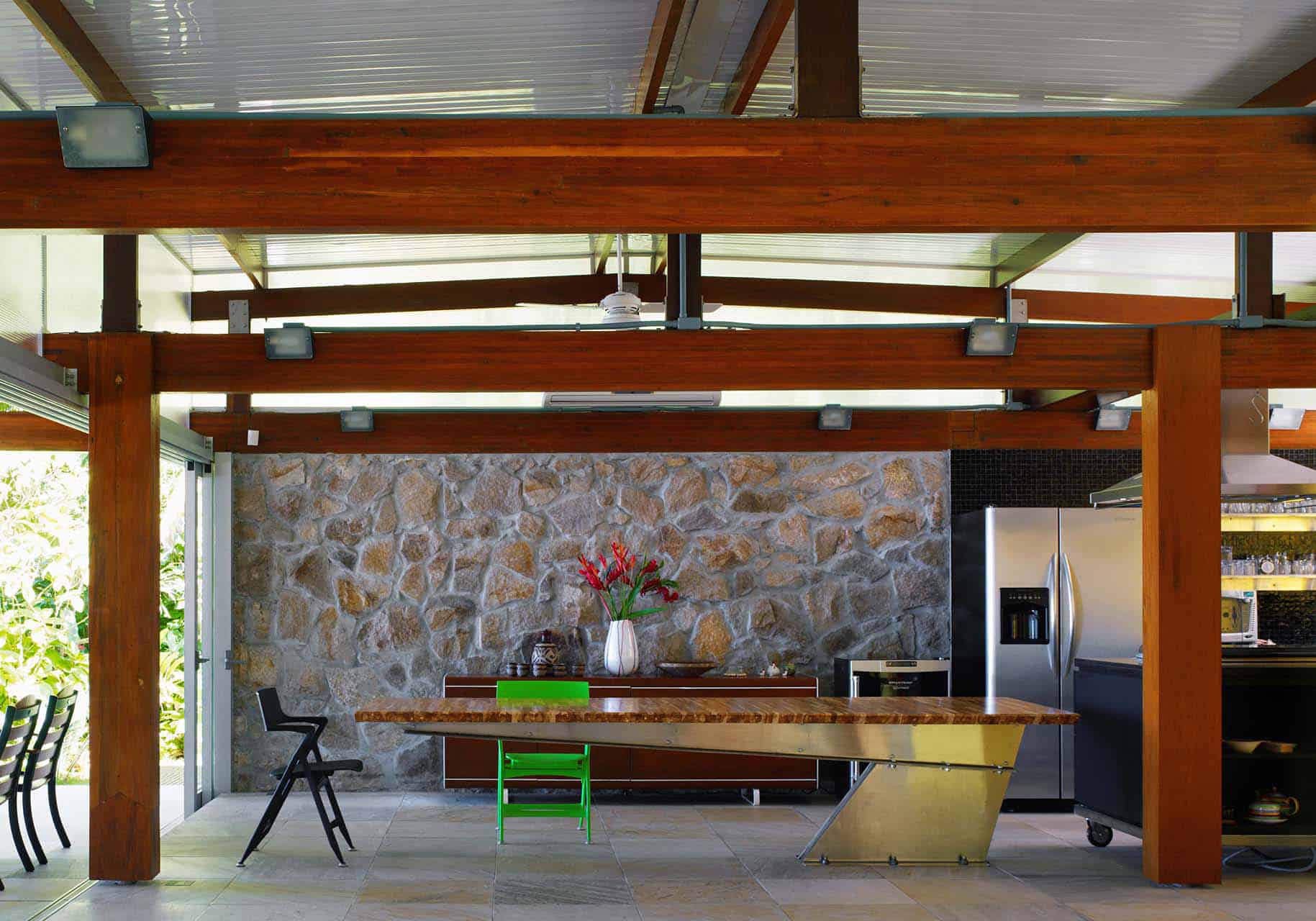 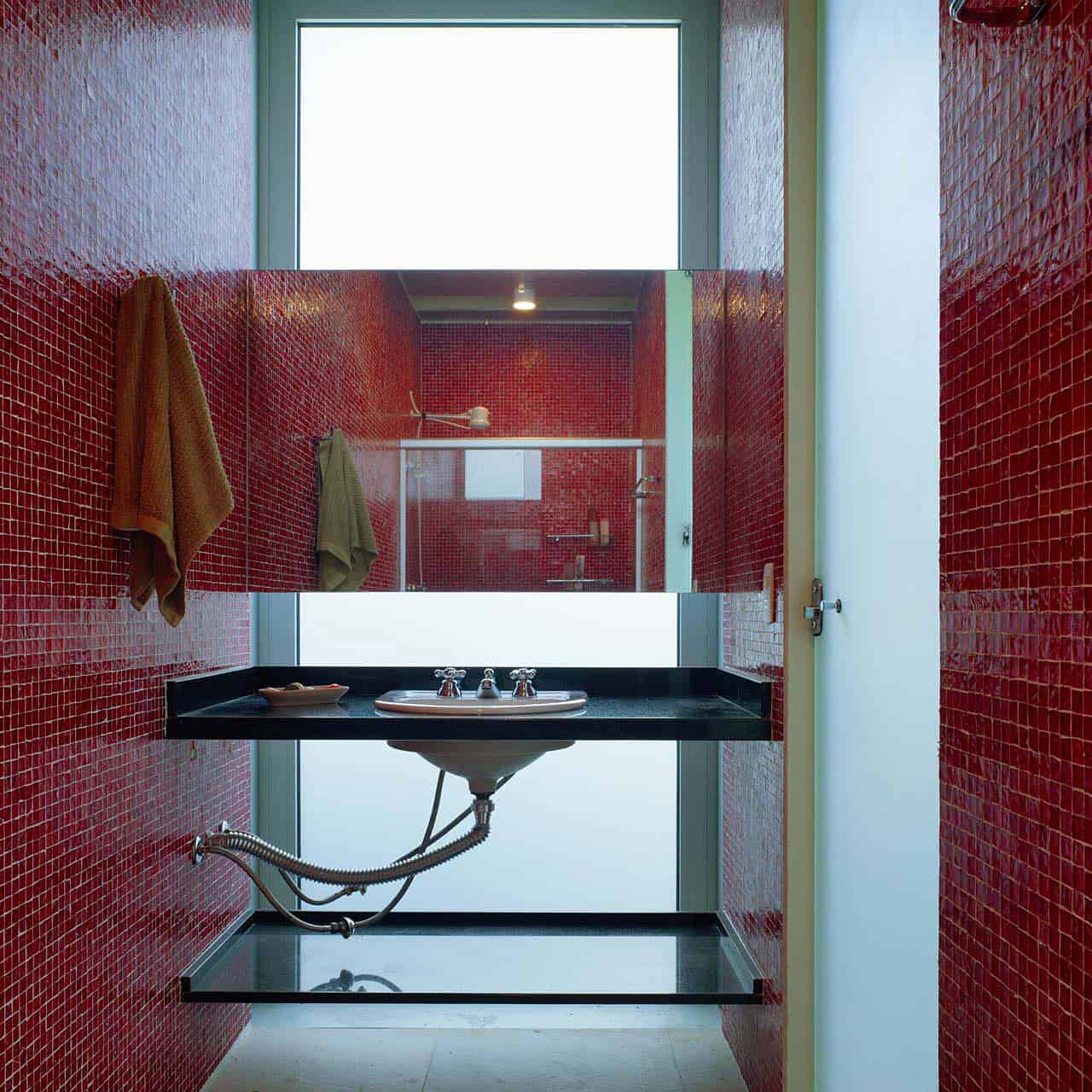 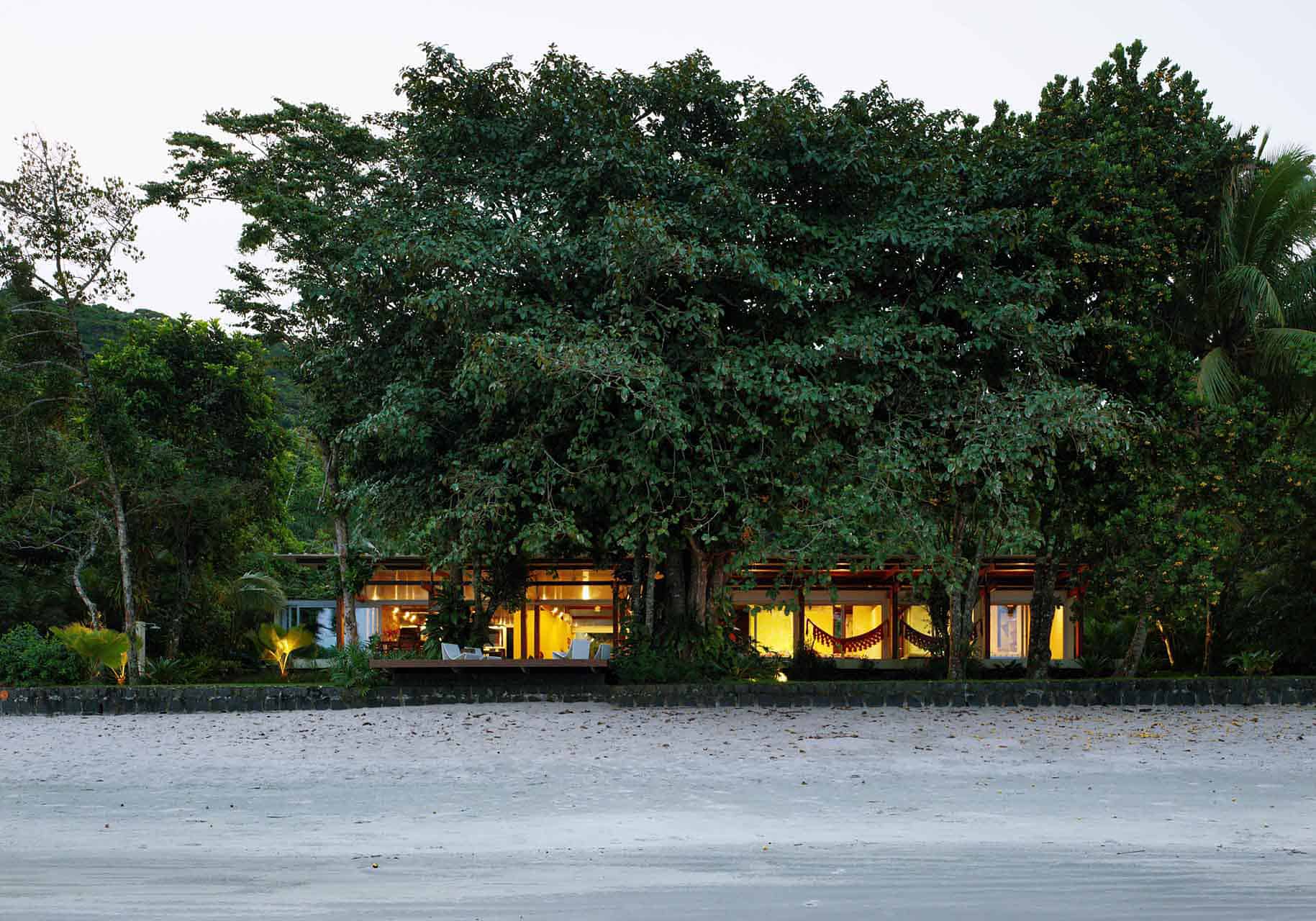 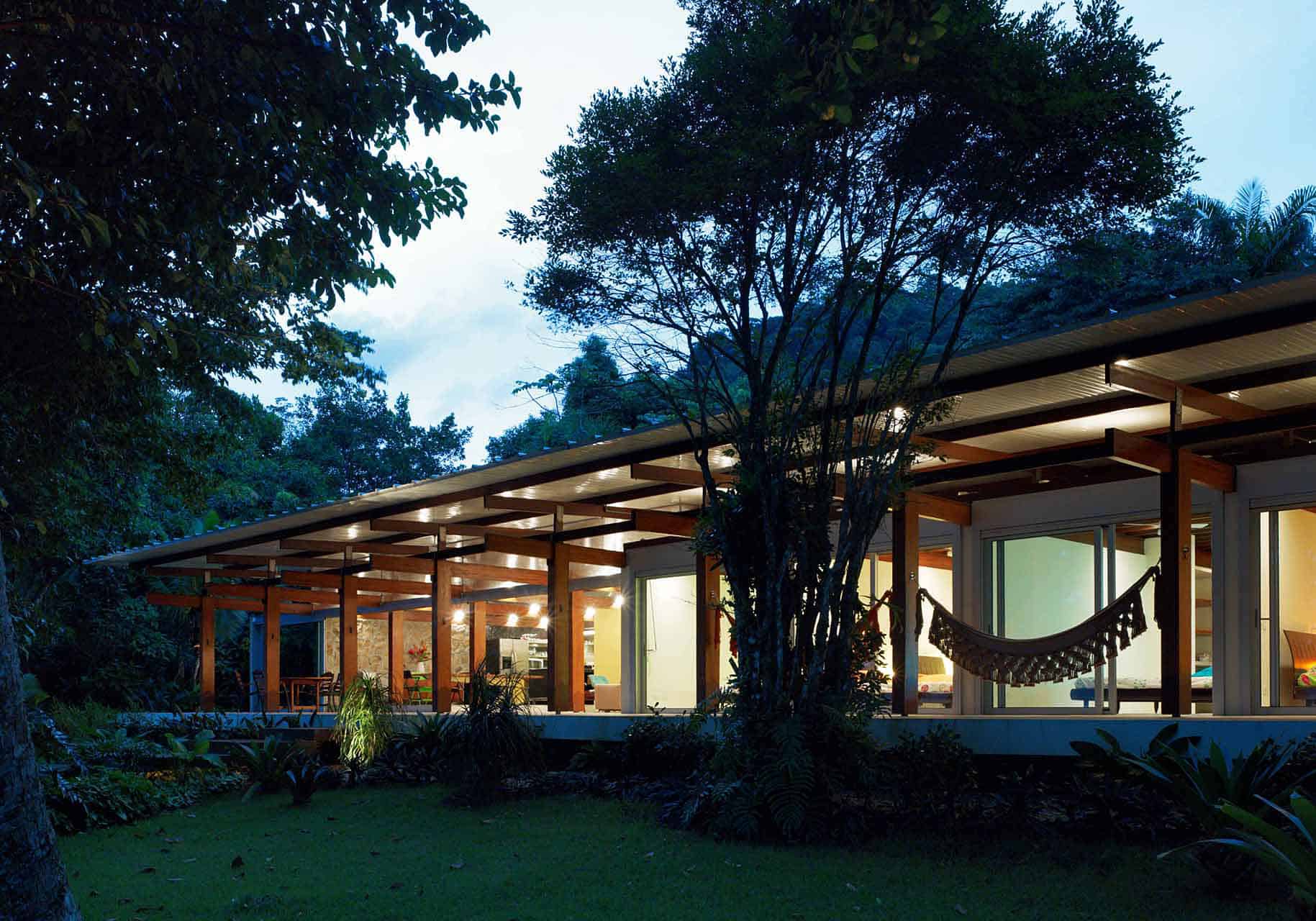 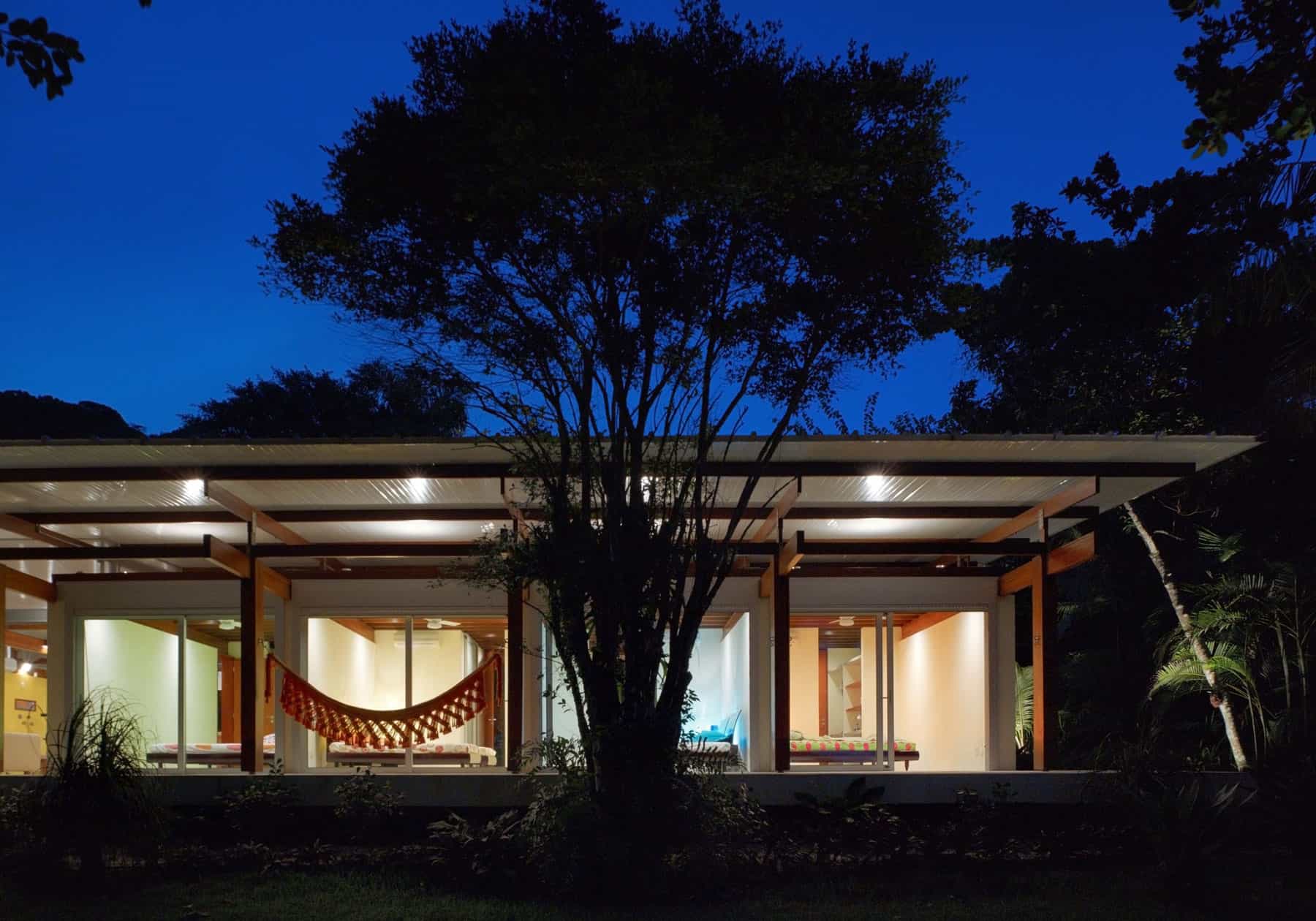 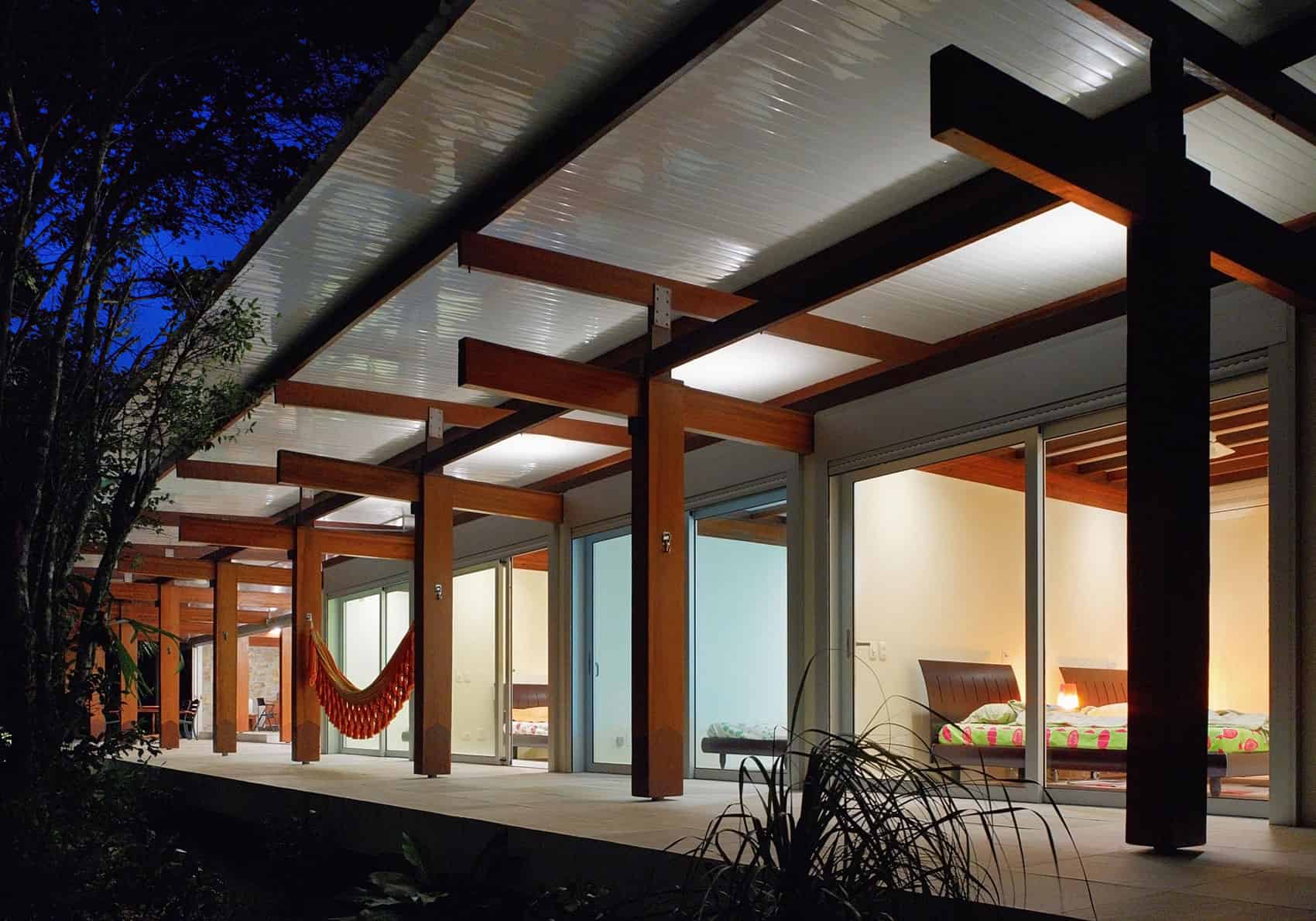 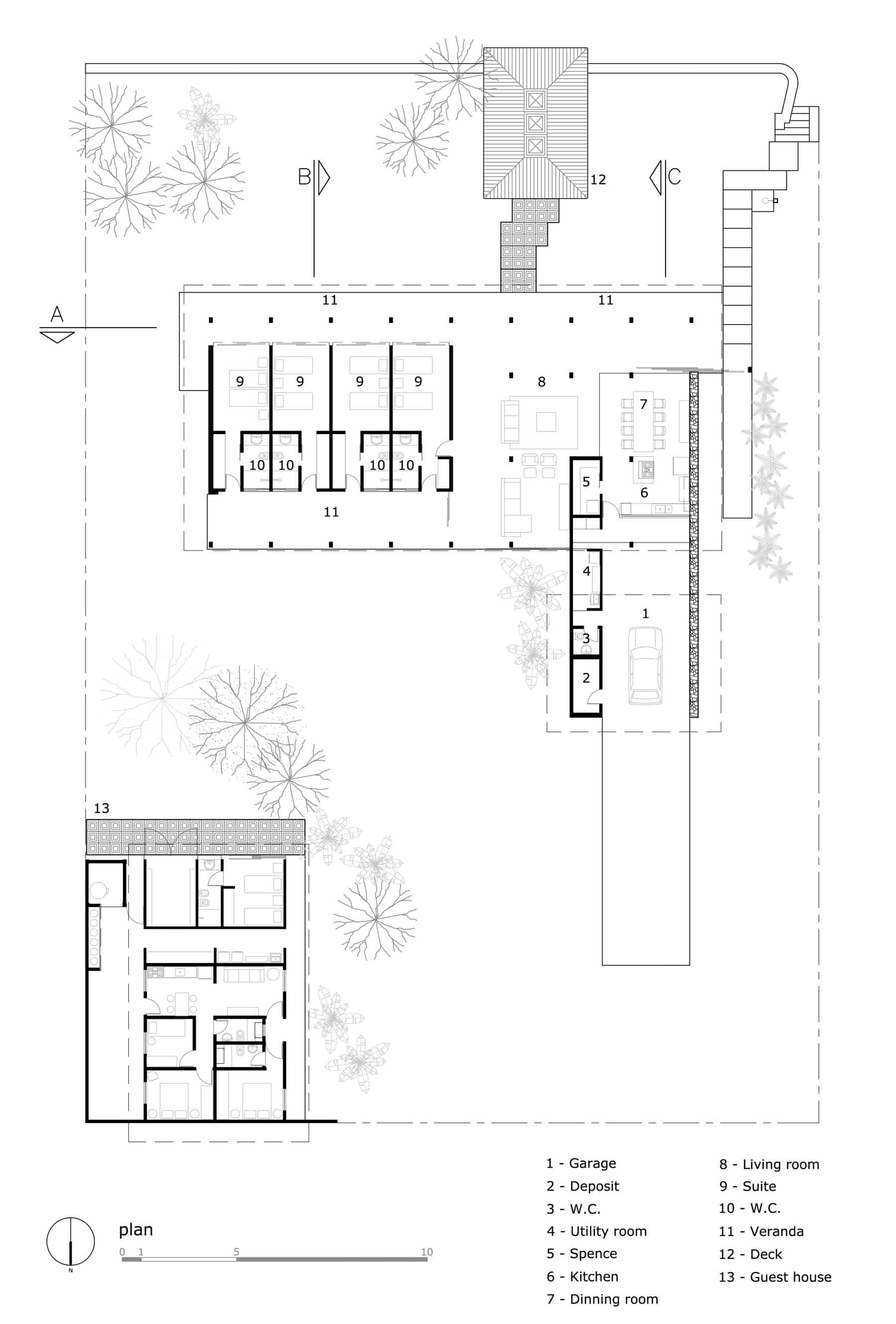 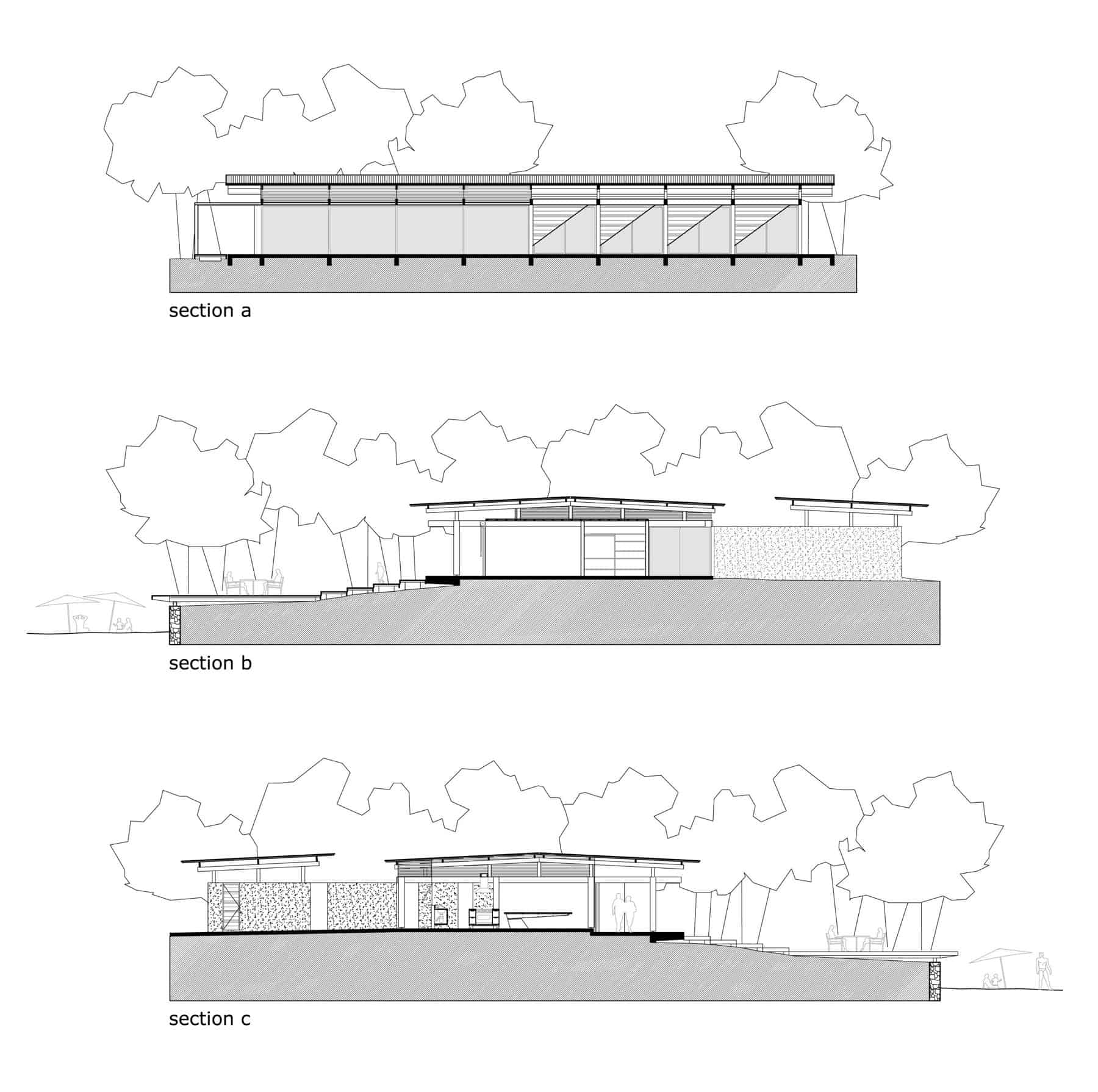 The architects have completely remodeled this single story contemporary home located on Preta Beach in Sao Sebastiao, a city in the state of São Paulo on the southeast coast of Brazil. 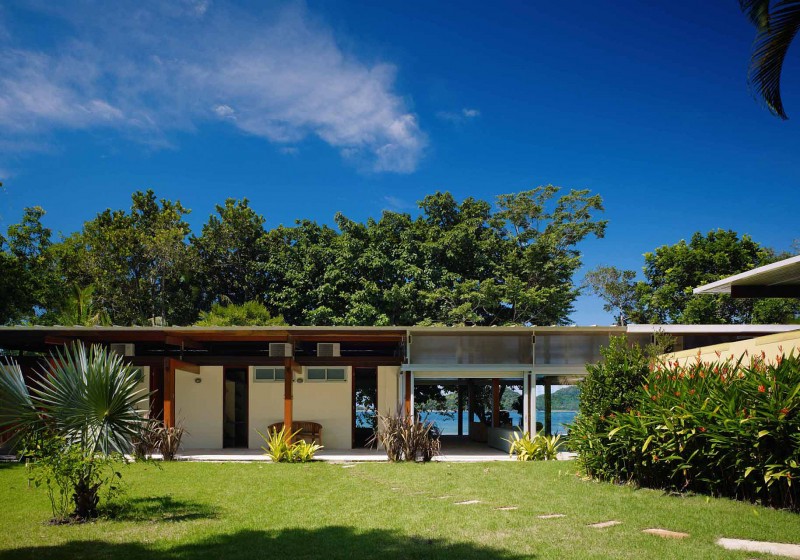 “The house is implanted in a strip of land between the sea and the mountains of the Serra do Mar. Both ecosystems are extremely exuberant. The mountains are covered with the native Atlantic forest (the most bio-diversified ecosystem on the planet). The beach is quite small, and scarcely occupied. The sea water is crystalline, protected by small Atlantic-Ocean islands.

A large parcel of land inside a condominium of few houses with no physical separation among them, makes the natural elements the main aspect to be considered for the building arrangement. The house is a link among the natural forces surrounding it. The house has been completely remodeled. From the original building, we have only preserved its location, its laminated-wooden structure and a few walls.

All floors and finishings have been removed and a new roof structure has been added, so as to augment the ceiling height. Remodeling had the purpose of strengthen the house’s feature of being a liaison to the natural forces. The private area has been split in identical parts and the living spaces have been joined together into a single roomy space.

The house is a large rectangular platform with its longer sides parallel to the beach. The building is virtually resting on the beach sand. One of the two largest façades faces the beach and the other looks at the mountains. These large façades are composed of wide apertures and broad linear verandas. Parallel verandas in opposed façades help in the circulation for the different rooms.

We deemed conceptually important that the brickwork walls and the opaque elements should be distributed perpendicularly to the beach, so as to provide transparency and fluidity to the building (and let winds, light and views in). Mobile and transparent closing elements are distributed parallel to the beach and have been designed in order to provide maximum aperture. In the veranda, sliding doors running on independent rails may be all withdrawn toward outside the house perimeter; in the rooms, sliding doors and rolling Venetian blinds allow of light and ventilation to enter.

The house puts similar-duty activities together, so as to increase the quality of the spaces. The house’s private areas have been designed to provide maximum privacy, and its common-use areas should promote maximum conviviality and spaciousness. The house has four equal, independent bedrooms, with separate entrances and direct access to the verandas.

We’ve tried to put the common-use areas such as living room, TV room and kitchen together in a single, broad space. Such feature promotes meeting and provides the pleasant feeling of a wide, multiple space. Unlike the living room, bedrooms have a ceiling, having therefore a lower and closer height that protects and shelters users during their rest.

The veranda is also a special-featured space. It acts as an extension of the beach sand, which is also traditionally a common-use space. The room’s sliding doors’ total aperture allows the room to make a whole with the veranda, therefore with the beach. So the house has now a single conviviality space; a “room-veranda-beach” space. The tactile beach sensation has also determined the choice of the sandstone-type floor.

The rectangular platform is made of reinforced concrete; it is distant from the ground, and covered with square São Tomé-stone 57x57cm plates. The original structure is composed of laminated-wooden beams. The new roof structure is made of Itaúba wooden beams, ready with metallic ties and stainless-steel screws. The roof is of the sandwich type, made of aluminum with a 50mm polyurethane filling.

The bedrooms’ ceiling is made of pre-painted MDF plates. Sashes are in anodized aluminum and laminated glass. The upright closing between the metallic tile and the sashes is in crystal alveolar 10mm polycarbonate. The walls in the wet areas are covered with color vitreous-glass tiles. The furniture is composed of metallic stainless steel bases.”

The Small House by Unemori Architects