Monet himself would envy the site of this contemporary home in Lake Biel, Switzerland.

The firm bauzeit architekten designed this project in 2009 with an emphasis on the relationship between the house and its picturesque surroundings. 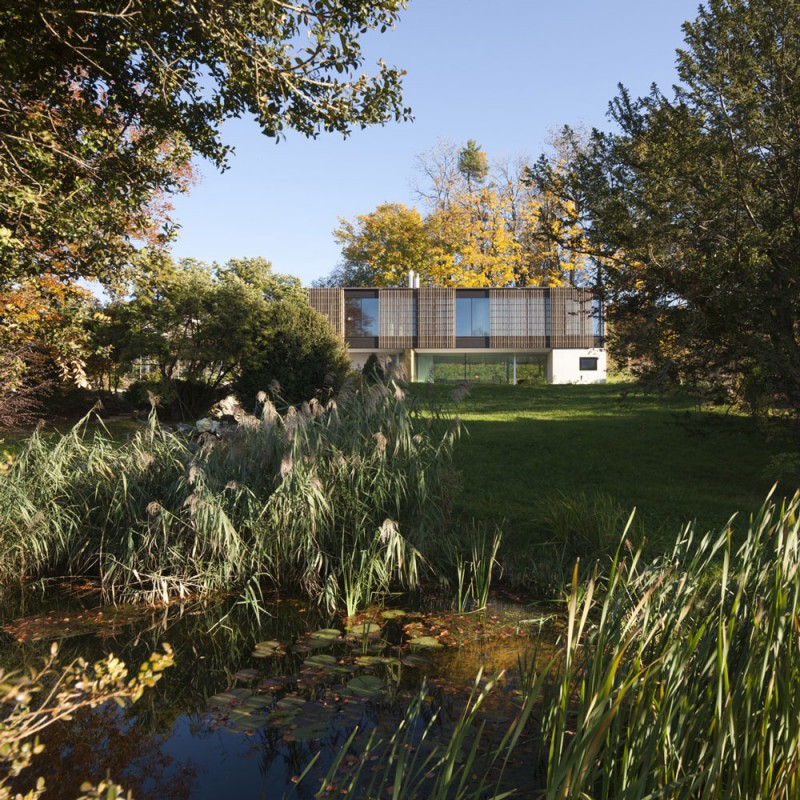 “Placed on a gentle slope on the southern shore of Lake Biel, the new edification was built on the old romantic garden of a 19th century villa that no longer exists. The remaining parts of it, an ancient cave, a pond and the vegetation, were kept and form part of the new project.

It is organized on three levels, each floor having a different spatial character, housing three specific program areas:

On the ground floor are organized the living room and kitchen with direct contact with the outside; a total transparency, in line with the slope, is guaranteed with very large windows.

To the east, a small forest and a mirror of water created from a natural source, to the west the view opens onto the garden with its exuberant vegetation and the lake as background.

On the first floor a large area is modulated by two sculptural volumes containing two bathrooms. Through a curtain system the space is built variable creating a sleeping area and two zones for work and meditation.

If the ground floor is characterized by the use of exposed concrete and a big transparency, this floor is entirely made of wood (ceiling, floor and walls) and suggests instead a more privacy vis-à-vis the outside.

The environment is omnipresent but ‘filtered’ through the wooden lattice which, at the same time contains the unwanted attention from the outside.

On the lower floor the secondary areas, as cellar, laundry, heating, and a workshop. If the two upper floors are characterized rather by the monochrome and the use of materials in their natural state, these floor is characterized by a strong use of color, floors, walls and ceilings combine various colors.

The vertical movement guaranteed by the staircase, is the passage through three distinct worlds, with no continuity.”

House at a Lake by BBSC Architects

House by the Lake by Marte.Marte Architekten

The Petit Chateau, a Luxury Ski Chalet in Courchevel