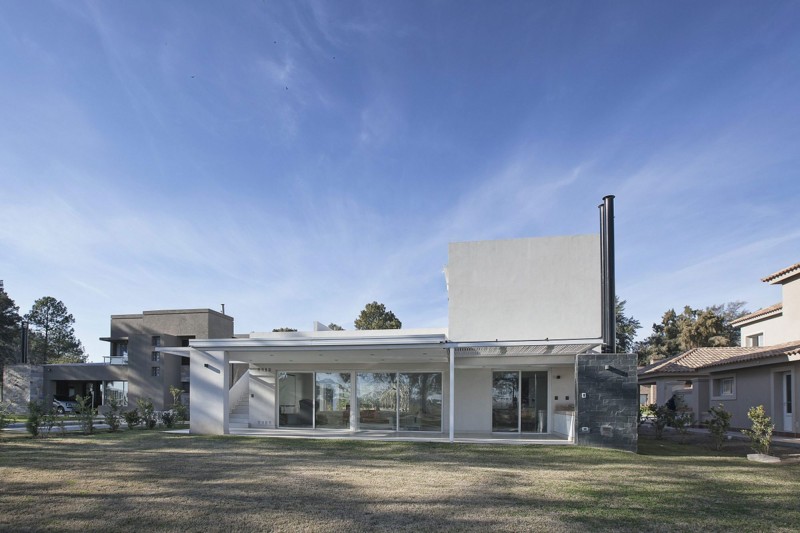 “The project is developed in a plot whose bottom coincides with the perimeter of closure of a private neighborhood and beyond the limit, extends sown fields, allowing having a broader vision of the surrounding landscape and also having more privacy in the rear. Coincidentally, the rear facade is oriented to the north, so the most private part would have the best orientation.

From the very beginning, the owners made special emphasis on a living-room wide and directly related to the courtyard and the gallery, while the bedrooms and the most private part would be located on the top floor. Furthermore, the possibility of parking required two cars.

With these premises and as a result of the lot dimensions and determinants of lateral separations, it was decided to place the entire width of the living room area with the gallery, located toward the bottom and raise the volume of the bedrooms of children in the front, creating a garage intern with the requested capacity. This simple movement releases the facade on the ground floor and serves as a framework that enhances the visuals throughout the project from the front to the back yard and at the same time take advantage of better orientation. To make this more powerful visual influence, the whole of the bedrooms, is supported by just four points.

The continuous floor L-shaped, which distributes laundry, a guest room and master bedroom that opens onto a terrace. Morphologically the project is assembled with 3 simple volumes, which are set by the verticality of the stairwell, which also functions as a patella that organizes the internal functions. On the living room stands a terrace, which can be accessed independently from the outside, with the idea that you can use to maximize the visual environment.

The use of contemporary language, pure and simple lines are complemented by the use of a single color for the siding, leaving the stones covering the specific elements that seek to highlight.”