Completed in 2009, this small studio is located in Londrina, a city located in the northern region of the state of Paraná, Brazil. 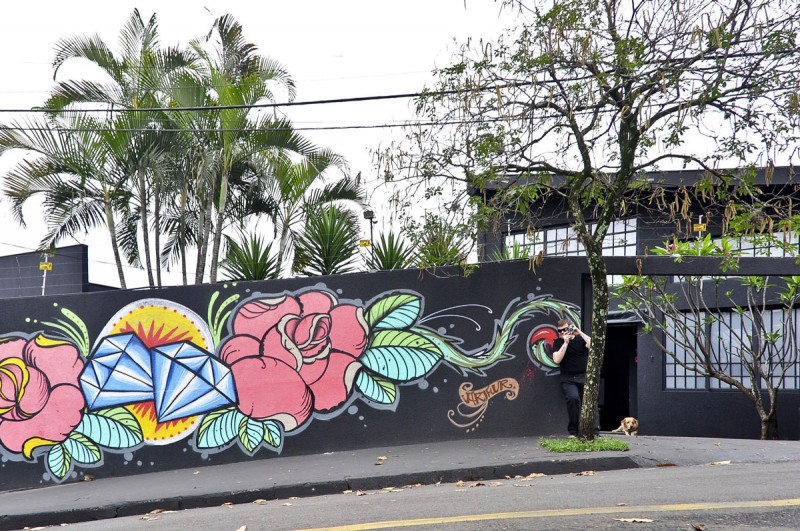 “The young Brazilian architect Guilherme Torres chose to live in a small studio in Londrina, Brazil. The place would lodge an artist’s painting atelier and was under redecoration for over 10 years by the architect himself. The present project came to life due to several problems found in the building such as electricity mains and rewiring, wall cracks and seepage. Within a month, all wall coatings were removed and rebuilt whilst the architect decided to build a brick table and couch.

“As a furniture designer, I decided to follow an opposite thread to what I usually do and create something permanent, stable”, says the architect.

Not only is the table used to hold books and collections but it is also a place to work and eat at, while the couch stands from wall to wall and has two black fabric mattresses. The cushions were made with fabric cutouts with patterns designed by the stylist Adriana Barra to Micasa, São Paulo’s design temple. The kitchen was compressed in a 1.40m wide by 3m long space. The concrete floor was coated with rubber so as to avoid oil stains while the wall received plotage images inspired in Arabic mosaic, designed by the architect himself.

The resident’s bedroom bears resemblance to a loft, with a warmer atmosphere compared to the rest of the house due to the exposed brick wall at the top of the bed. The electrical wiring system becomes more evident in the guest’s bedroom, located in a mezzanine floor above the living-room. The design was inspired by Paulo Mendes da Rocha, a Brazilian architect who won the Pritzker prize in 2006 and famous for exploring the Brutalist Architecture, in which the architecture functional mechanisms such as hydraulic and electrical pipes are at sight. Modern and avant-garde, the whole building cost approximately U$ 6,000.00 and the low cost is due to its simplicity in architectural solutions.”

Home and Studio of Guilherme Torres

AS House by Studio Guilherme Torres

A HI-MACS Home In Termen