Not surprisingly, ‘Stripe House’ gained its name from the horizontal stripes that dominate its exterior.

Designers at GAAGA added the stripes to enhance the texture of the building and add tactile, as well as visual, interest.

The house is locate in Leiden, The Netherlands and was created in 2012. 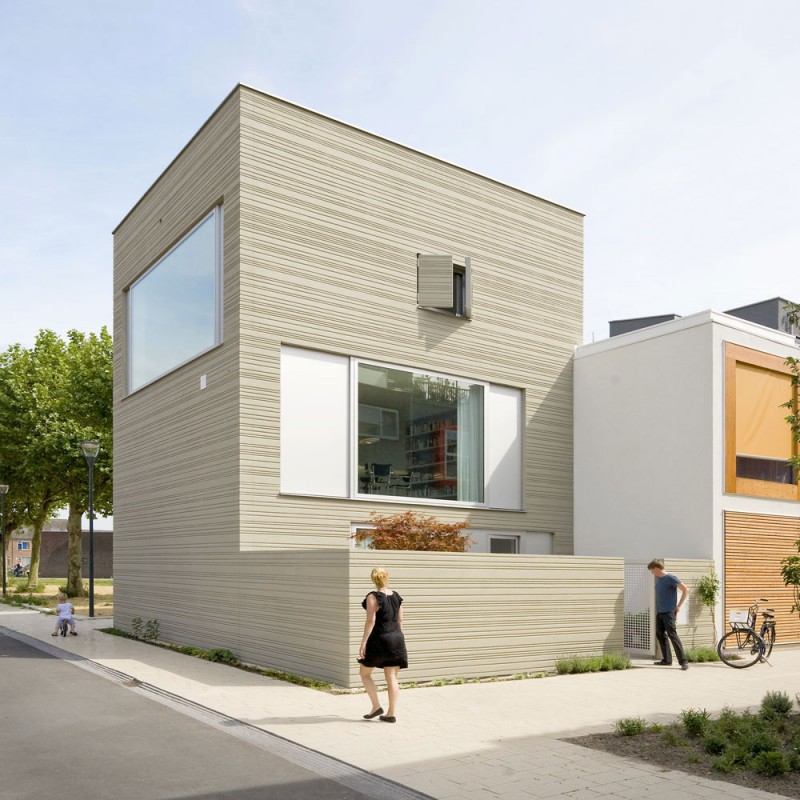 “Stripe House is a small, mixed-use house located in the city of Leiden, The Netherlands. It takes its name from the characterizing horizontal stripes carved deep into the façade and that wrap around all three exposed elevations.

The house resides in a new urban planning area where clients can develop their own houses. It is on a corner plot adjacent to the park nearby and south-east of pedestrian streets. Despite its limited size, the plot is not entirely built on.

One quarter of the plot is reserved for a small enclosed garden, creating a soft transition from public to private space as well as a distance to neighbouring houses. Opting for a garden implied also a concentration of program on one side of the plot.

The cube-like structure encloses a stacking of three floors, all similar in size but different in program. Going upwards the functions have an increasingly private nature.

The ground floor houses the office space and the patio, the next level contains the kitchen, living and dining space, while the upper floor holds two bedrooms and a bathroom.

The large void along the north façade is the focal point in the house. It connects the two upper floors and it spatially zones the kitchen area. The enormous window at the top offers an abundance of natural light as well as an impressive and poetic sight on the Dutch sky.

Because the house is situated on a corner it has an almost all-round orientation and presence.  There are not many window openings, but the ones that are present are large and oriented towards interesting views.

On the first floor the three windows together form a triptych. They show three different scenes each representing a specific side of the house: the park on the east side, the neighboring houses on the west and the sky on the north.

The huge exterior walls are made tangible and appealing by means of horizontal grooves in the plaster. The grooves, with a total length of approximately 7000 meters, are handmade and carved into a semi-hardened plaster by using several moulds. The result is an unparalleled piece of craftsmanship.

From architectural point the horizontal grooves enhance the ‘all-sidedness’ of the volume, link the several facades and to enhance the perspectival effect of the cube-like shape of the project.

A funny thing now – and what we did not expect – is that a lot of people are actually touching the façade with their hands.

The Stripe house is also a very sustainable house that scores well in several energy performance and environmental index calculations and labels.”

House U by 3LHD