The name of this contemporary, 2011 project by Luca Zanaroli means “House in the Olive Grove”.

When designing the home, the architect wanted to create a functional home from traditional materials that supplements the beauty of the plentiful olive trees that inhabit the site.

It is located in Morciano di Leuca, Italy. 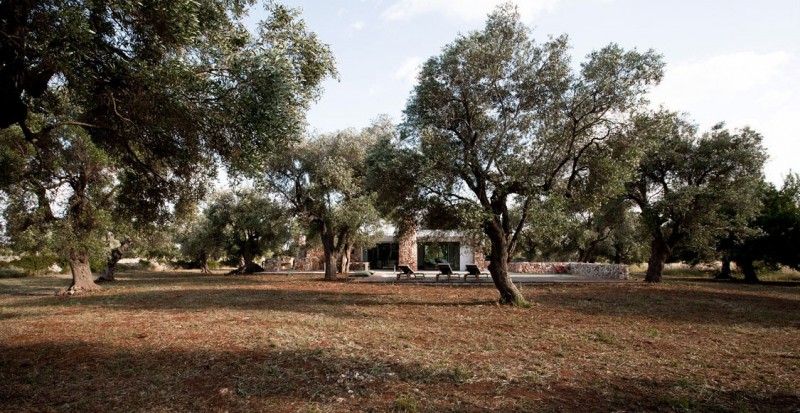 “The land on which it should have been made the new building was and still is full of beautiful olive trees. The intention of the designer was to maintain the integrity of the perception of the place without changing the natural look with explants or movement and not to alter the color effect of the whole.

To achieve this it was therefore necessary to obtain a proper landscaping of the building: the choice of its location was important (it was explanted or moving a single tree to build the new building), but not crucial to a harmonious relationship with the environment .

To reduce the impact of the new building, the designer also spoke volumes and materials. On the one hand working to decomposition and subtraction by disassembling the volume into several blocks corresponding also to the functional spaces of the house (both internal and external) then re-assembled so as to obtain both their optimal use that the overall ratio between the masses.

On the other characterizing the individual parts of the building with traditional materials and local (literally found at the site) as the stones obtained from the excavations to build the swimming pool then used to coat the exterior walls of the building, with white lime plaster to define simple volumes and minimal living spaces both internally and externally.

A sort of box in the box where the outer shell which also serves as the link between the context (the stones were deliberately left “dirty” the land from which they were extracted) encloses a volume and the contemporary language which, however, does not close itself but seeks dialogue with its surroundings through large windows and views of the countryside enhancing the specific character of the landscape through the full integration and fusion of the interior with the exterior.

The stone walls laid dry as the local tradition of the walls that surround the fields also play a thermo-regulatory function of the building. The mass and the air gap between the stones are in fact a good layer of insulation for the sunny parts of the building facing south and west influencing effectively in the gradient temperature and humidity and environmental comfort of living spaces.

The materials used are all natural and locally sourced as the stone of Cursi for external flooring wood for the solarium pool cement mortars based on lime plaster for interior floors and walls of the bathrooms.”

Magdeburg Water Bridge, the Longest Navigable Aqueduct in the World!