Danilo Matoso Macedo created this contemporary home in 2012 for a young couple living in Brasília, Brazil.

The structure’s wrap-around deck provides panoramic views of the landscape, and, the house itself is adaptable to family life, should the owners have children. 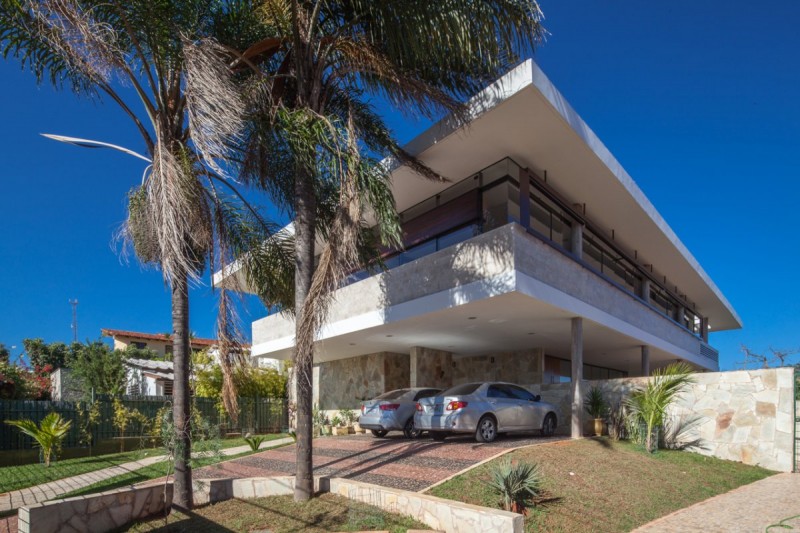 “The owner of this residence in the South Lake district of Brasilia, grown nearby. The window of his room opened to the view of Lake Paranoá northwest, with the monumental area of the city on the opposite bank.

A landscape whose evolution accompanied him, and he wanted to maintain or extend. The house was almost fully elevated on stilts at the edge of the height permitted by law, allowing the desired view over the roofs of the neighbors.

Because it is still a young couple without children, the basic program (room, office, bedroom, kitchen and service area) was distributed only at the top level, facilitating rapid paths everyday, more frequent when children are small.

The indoors were arranged to prioritize the vision of the landscape, now converted into a central motif of the project – reverence complemented by a “panoramic deck” provisions freely on the cover slab.

In order to avoid a ceiling topping due to elevation of the main block, the ground floor was treated with staggered landfills. The garage is an intermediate level, along with a service equipped with hoists and installing temporary employee in order to hide the vehicles for users from the balcony above.

A small “flat” two-bedroom was designed for future occupation of stilts, second family life, in which the children would demand more independence – Early prediction of execution by the client in the first moment of the work, providing functional autonomy to the area leisure and allowing its use for any guest.

The structural system, ordered in vain relatively conventional 5.4 m and 6 m commanded building, with a strict modulation 60cm to fit all elements and components. -Band beams and slabs made possible the solution of flat roofs, even in advantaged balances that allow the house going over the landscape.

It opens directly to the view the room, the office, and the double bedroom – mediated by a balcony – and indirectly the kitchen connected to the dining room for large sliding panels. The integration between these two environments is enhanced by continuous bench, topped by a set of adjoining cabinets and windows that open yet frontal view of the street.

To protect indoor inclemency of the sun in the northwest facade, the landscape, were adopted eaves of a meter and a thick coated marble sill, ensuring protection in the hottest hours of the day.

To tape the window, the solution was the use of perforated adjustable awnings, posted a box completely independent of external windows, and loose slab enough to allow entry only direct light of the setting sun, without completely blocking vision.

The transparent range of approximately 40cm along the slab surrounds the entire high volume, bringing inside the various nuances of sunlight throughout the day, making it palpable the passage of time.

The record time, in another life, was also instrumental in the choice of coating materials “patinable” breadwinners of the floor – stone-of-Pirenópolis gross – and the facade above – beige marble cut-Bahia 60cmX15cm.

Following the same logic classical, so to speak, a stone floor in Portuguese provisions freeform integrates vegetation, indoor and outdoor areas on the ground floor, while a simple porcelain paves upstairs, arranged according to the modulation of the set.”

SO Architecture Designs a Contemporary Residence in a Young Residential Neighborhood Outside of Yehiam, Israel

Home in the Okanagan

Apartment in Dusseldorf by Ando Studio