This contemporary renovation project in Tokyo, Japan evolved from a original structure built in the mid to late 1980’s ( a period known as the Japanese asset price bubble or ‘bubble era’).

The original house was cramped and dark, so, in 2011, the owners commissioned Keiji Ashizawa Design to create something fresh and modern. 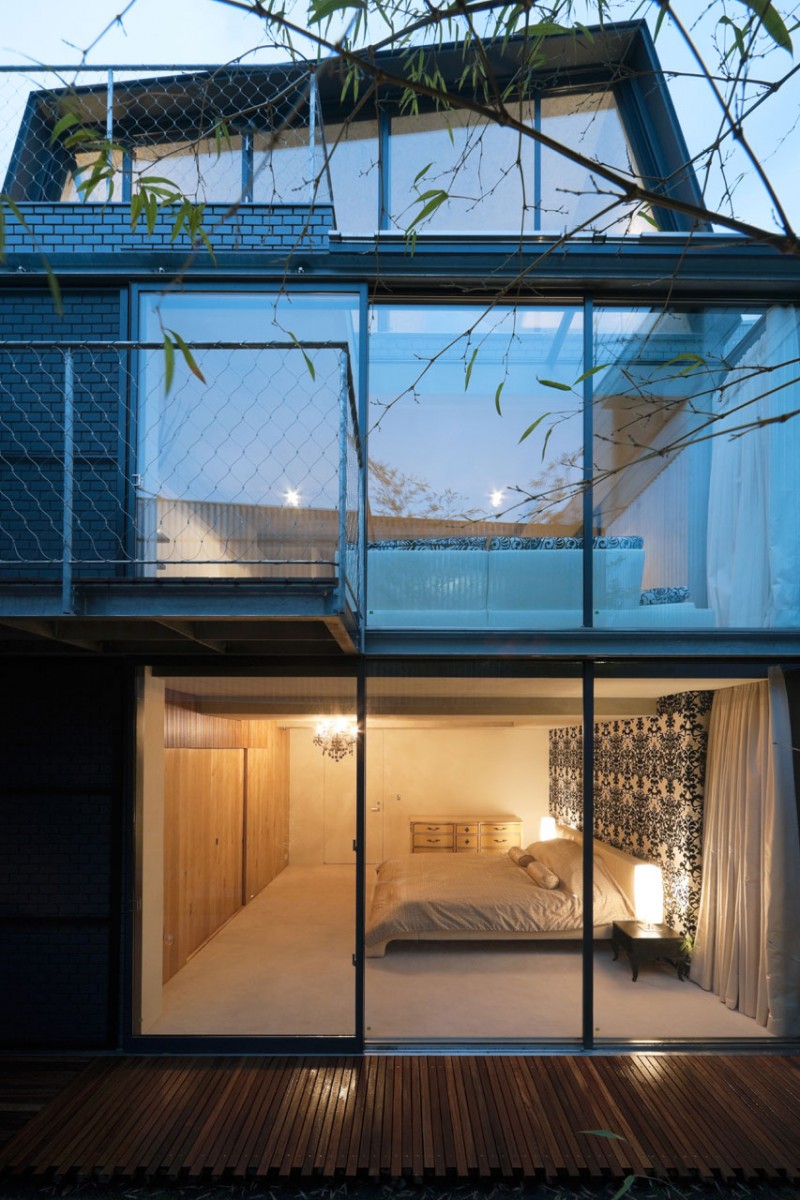 “SKYCOURT is an ambitious renovation project that involved transforming a Japan bubble era house into a modern home connected to the city and the sunlight. The house is located in a quiet residential area, a couple of blocks away from Tokyo’s business district. The original house plan was a dated two storey house with cramped bedrooms, small windows with no indoor/outdoor flow.

The clients, a working couple with two children, wanted to maximize the living space, create a backyard with privacy and develop a structure flooded with light. As the original house was part of a set of twin houses, the clients also wanted to decorate the facade in order to severe the link with the sibling. These requirements demanded bold renovations. Remodeling in Japan is a relatively recent phenomenon.

The average life-span of a building is less than 20 years, even less for central Tokyo. Building authorities are very reluctant to allow any alterations in structure (in part due to Japan’s earthquake standards) and are often only convinced after extensive negotiations and complete re-analysis of the structure. Every successful renovation project requires the clients and architect to first recognize the positive characteristics of the existing space.

In this case it was helpful that the clients lived in the old structure for one month to add their real life experiences to the design process. Achieving the client’s goals within the constraints of the building required a number of key changes: A new tent structure was placed on the top of the building thereby creating a new third-story with outside deck. Light was added in abundance by opening the south of the house and punching a courtyard out of the roof.

To further capitalize on these changes, the order of the house was reversed so that the living, dining and kitchen were shifted to the upper floors thereby giving those areas access to even more light. A serene family area was created on the first floor by placing the bedrooms and family bathroom on the first floor and connecting the master bedroom to a Japanese style garden.

The privacy of the bedrooms and garden was further ensured by erecting a 2-story louver fence on the south border. A quiet office and guest room were installed in the basement. One of the key features of Sky Court is the melding of indoor and outdoor spaces. On the second floor the new internal courtyard serves as a separator between the kitchen and living room while ensuring visual connection from that floor to the roof-top terrace. Similarly, the lounge on the third floor connects to the outdoor deck and opens to the view of Tokyo’s skyscrapers that dazzle at night.

Another important feature of the project is the creation of unusual volume. The hole punched through the roof creates a heart-like space in the center of the house that opens to the sky. The new top floor (where the airconditioning units used to be) was one of the few places where old space did not have to be recycled and, as a result, the angular roof cap is juxtaposed against the existing straight walls.

After the completion of the renovation project we had the chance to visit the home a number of times and were struck by how the alterations matched the clientsÅf lifestyle even more than anyone could have imagined. The house was lovingly given a name: The COURT that was created during the renovation bathes the home with soft light and allows its occupants to gaze at the SKY. The answer to the clients demands, a light filled home where one can feel connected and yet away from the city, is the definition of SKY COURT.”

House in House by Mamm Design