This minimalist residence is a project by MDS Architectural Studio that is located in Toshima-ku, Tokyo, Japan.

It was created in 2004 as a solution to the tiny, dark, and claustrophobic homes that are common in the densely populated area. 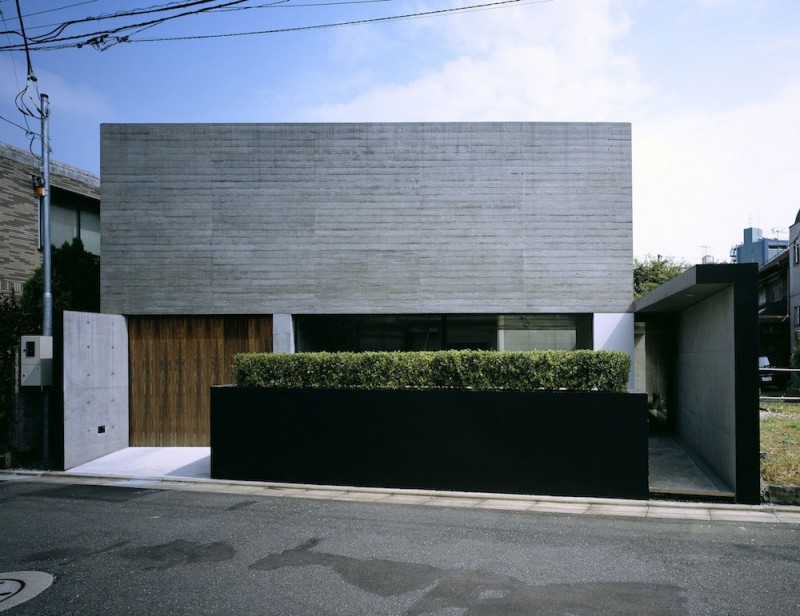 “Residential areas in densely populated downtown Tokyo tend to be claustrophobic and closed off, with individual plots surrounded by high walls to ensure privacy, and a concerted effort to avoid having windows facing the road.

Ideally, though, aren’t houses supposed to maintain a certain openness with regard to the surrounding neighborhood while protecting the privacy of their inhabitants and admitting light and air into their interior?

For this project, the first thing we did was to position the living room – often regarded as the part of the house that requires the most light – in the basement, which is normally considered to be an especially tricky area to ensure adequate sunlight exposure in.

A stairwell leading to the first floor above this basement was then installed.

Although this stairwell adjoins a dry area that faces the road outside, a landscaped green belt along the dry area positioned roughly at shoulder height helps to ensure a sense of privacy from passers-by.

The result is a pleasant underground space that is both brightly lit and well ventilated.

The first storey, which features one entrance for each of the two private lanes leading up to the house, is laid out like a gallery space that encircles the stairwell leading up from the basement.

Thanks to the configuration of the exterior, a sense of openness to the exterior extends throughout the entire first floor, which is continuous with the urban streetscape outside (and from which one can catch a glimpse of both the exterior and interior of the house).

In addition to functioning as an entrance, this open plan first floor is also a point of connection to the private family zone in the basement and the intimate private area on the upper floor.”

Although construction fees for the basement were high, the proactive use of this underground space proved to be extremely effective in the context of Tokyo’s high land prices.

The angle and intensity of the sunlight that enters through the skylight at the top of the staircase and dry area changes according to the season, time of day, and weather, reaching as far down as the basement level.

The result is a basement space located within a dense residential area that still manages to be open and comfortable.”