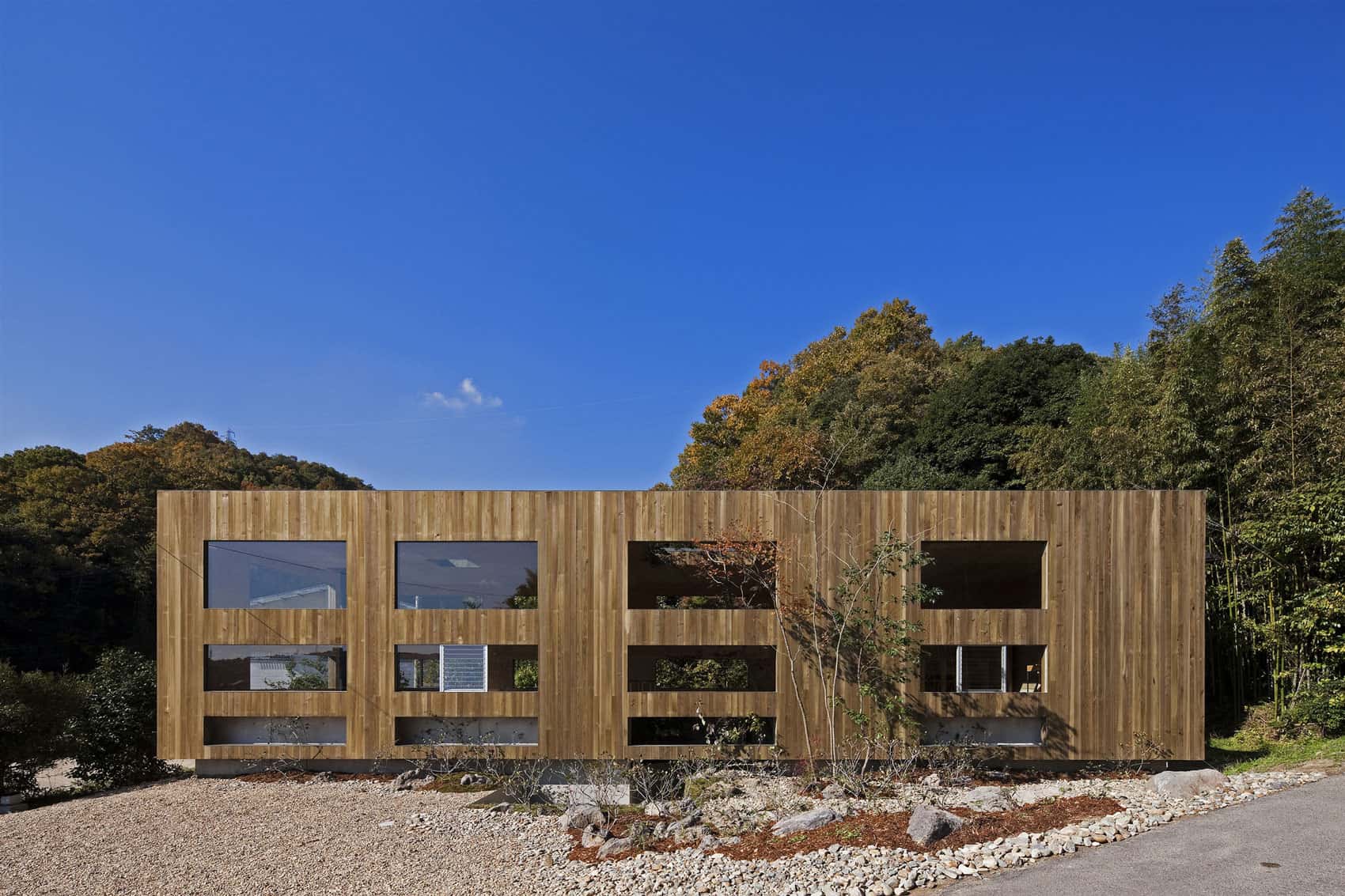 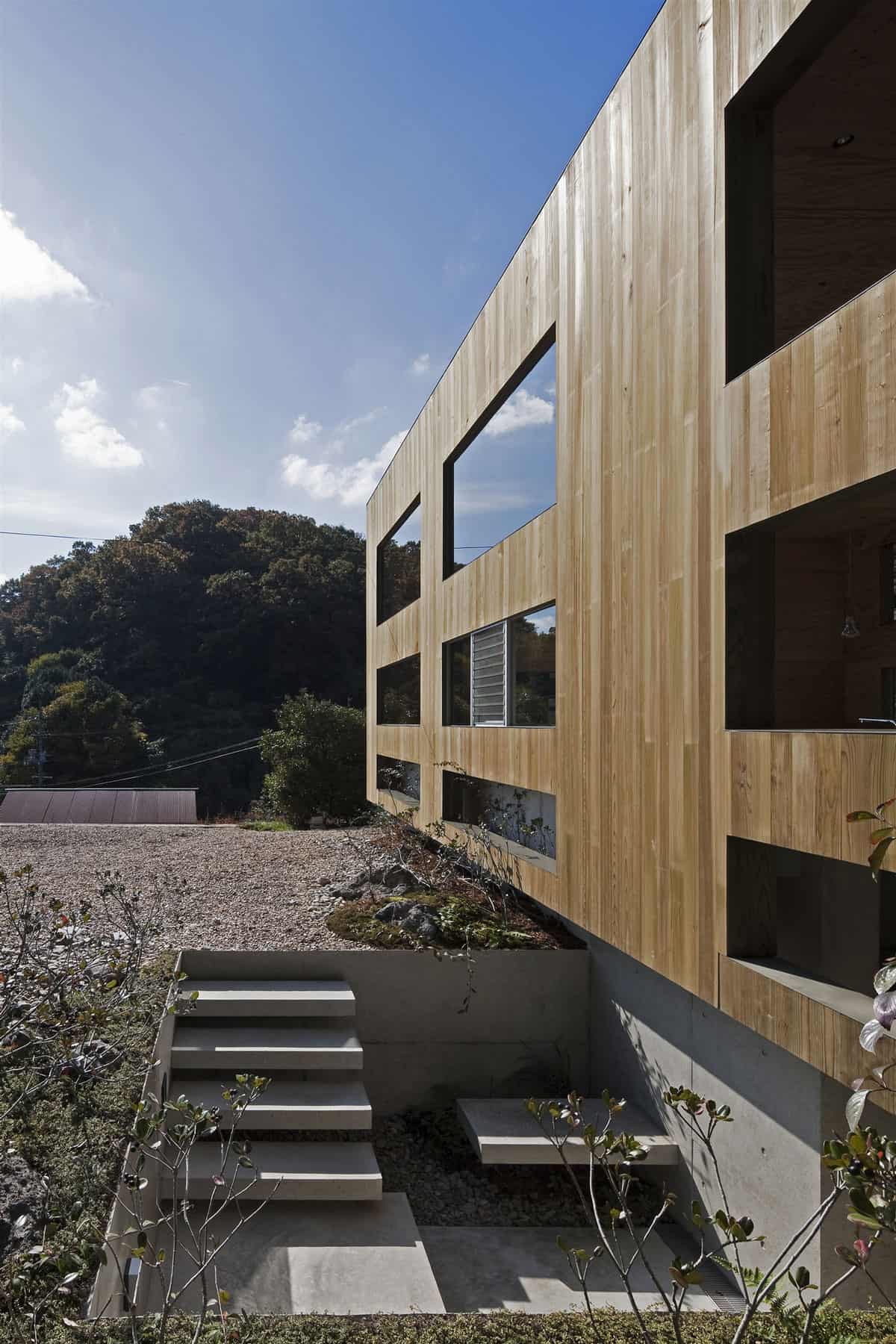 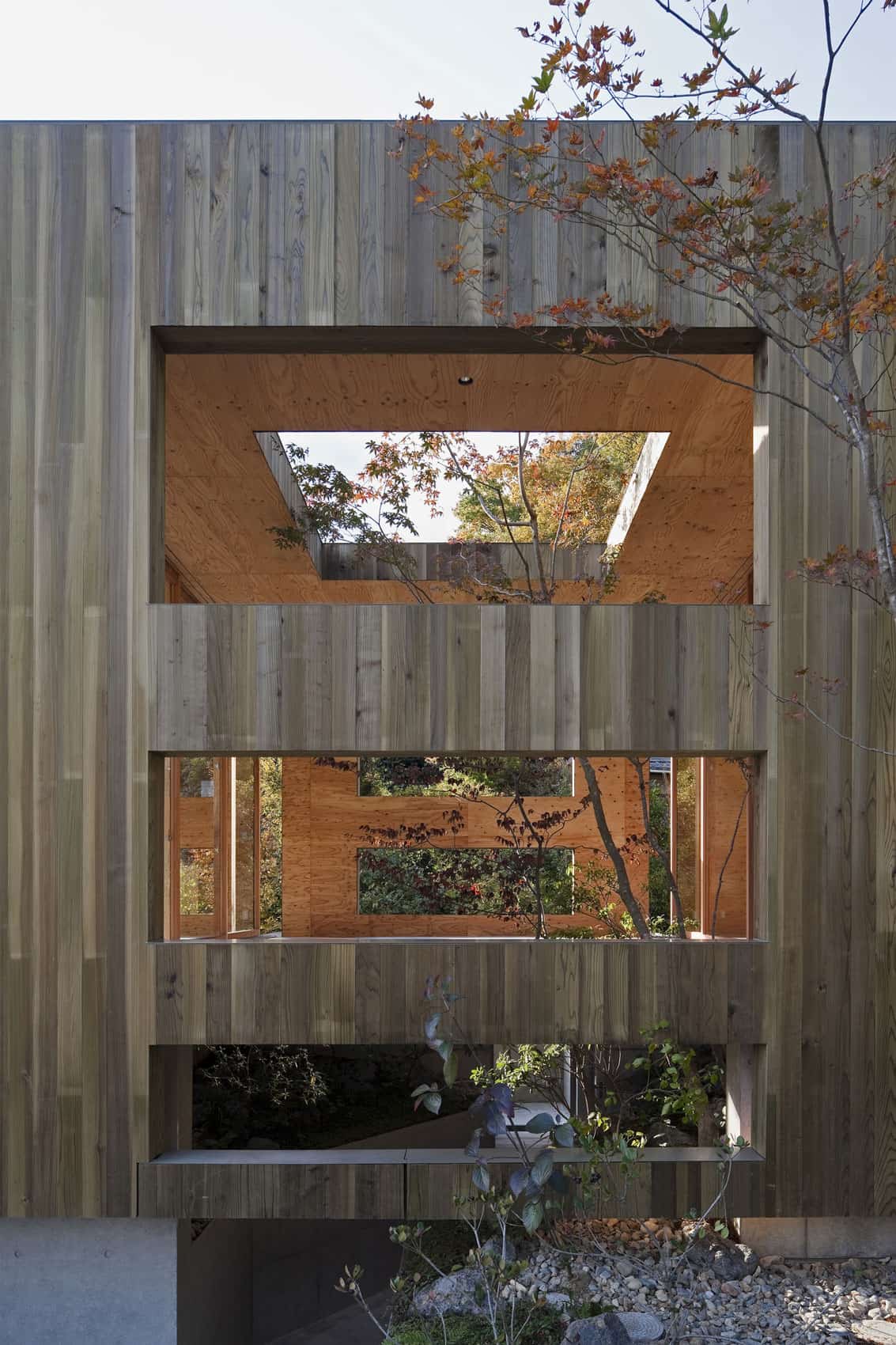 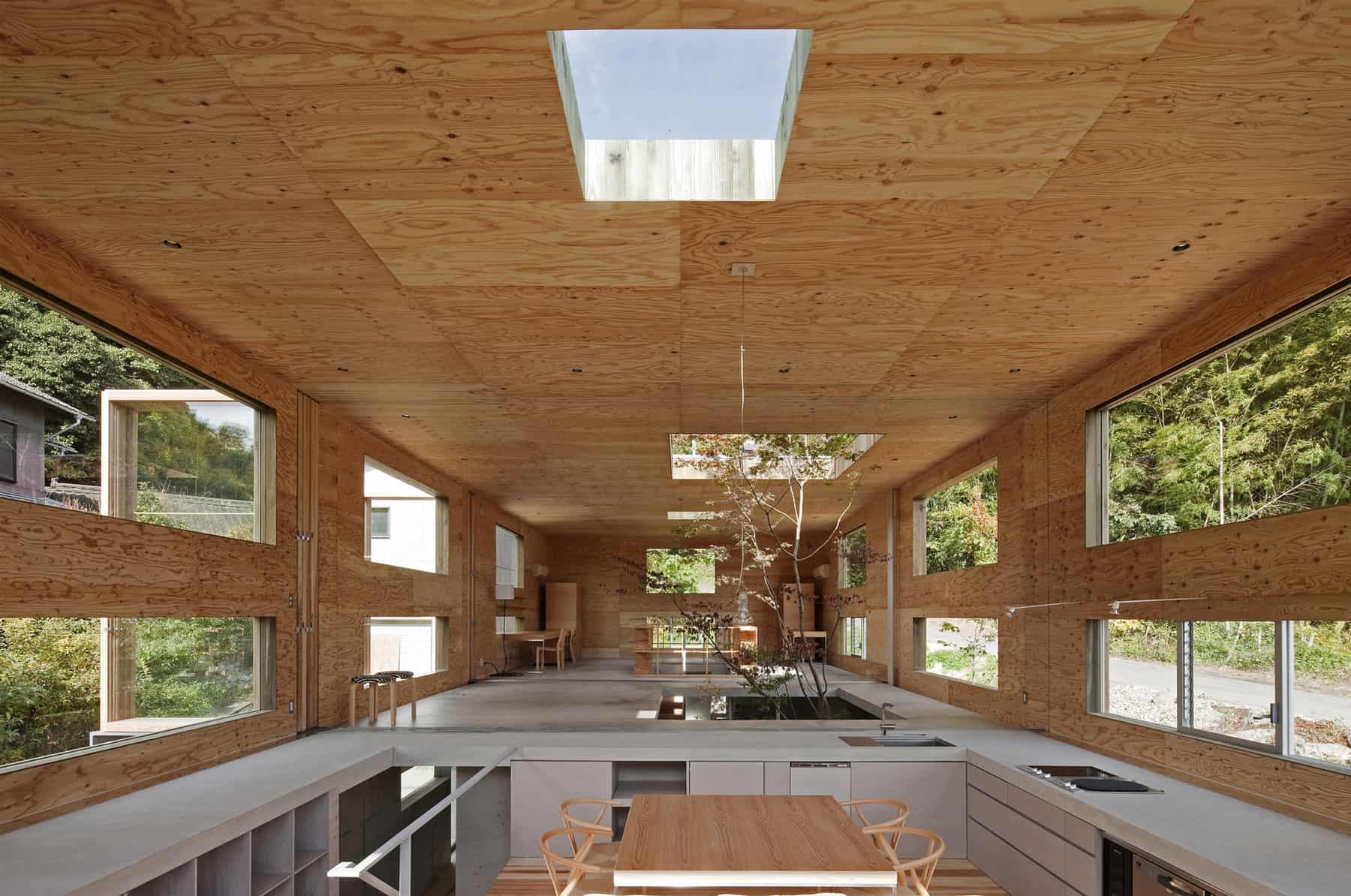 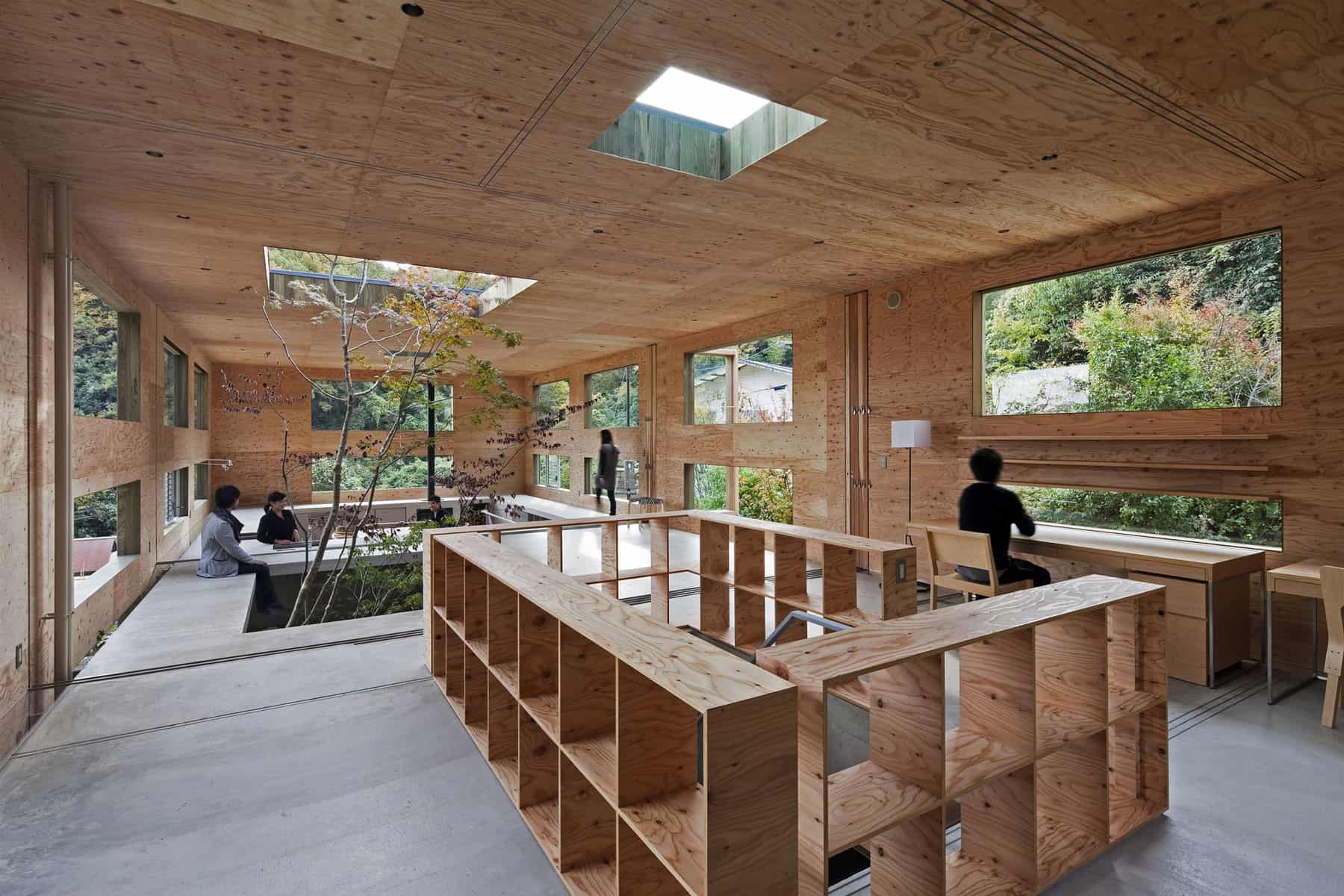 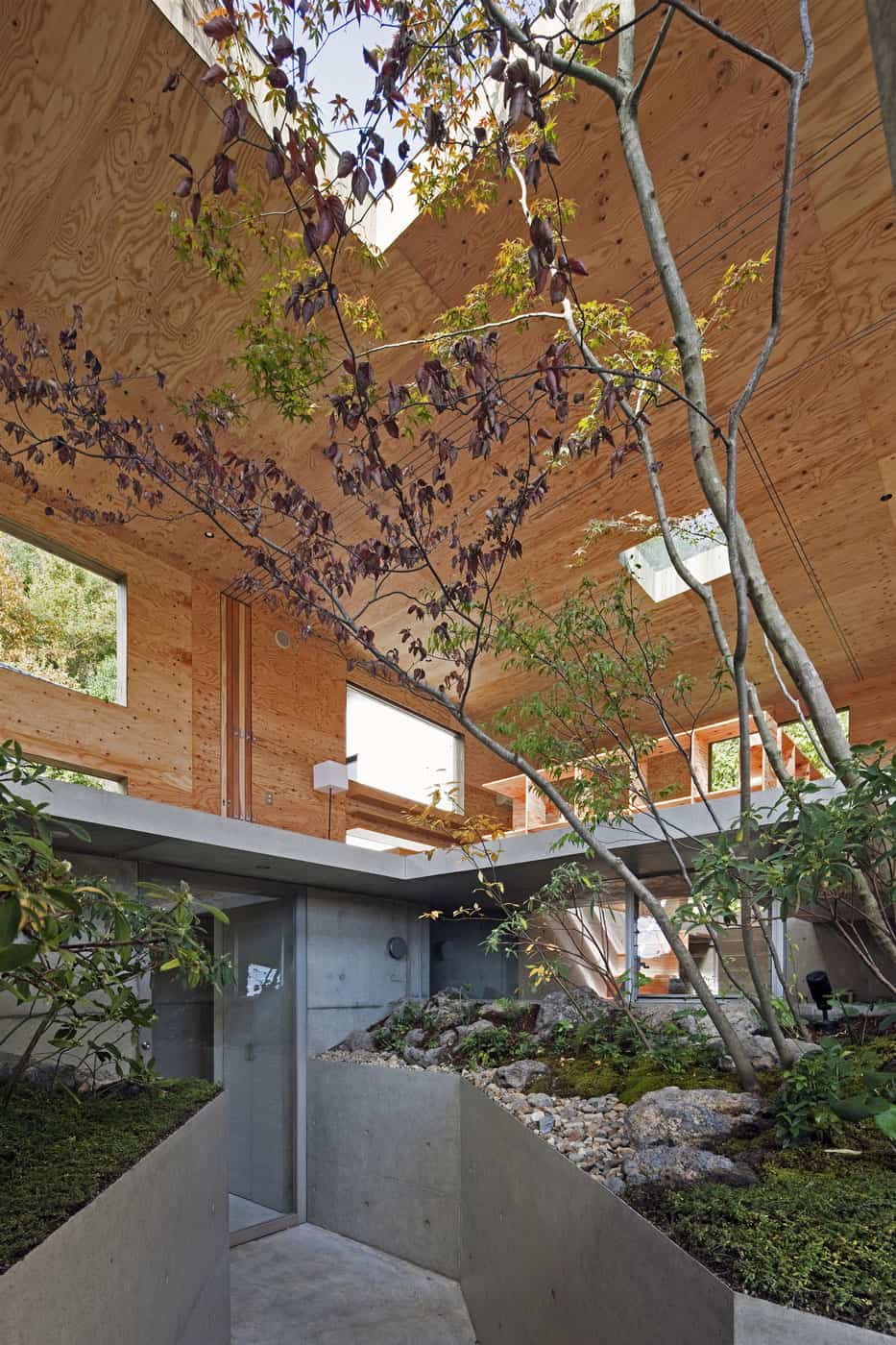 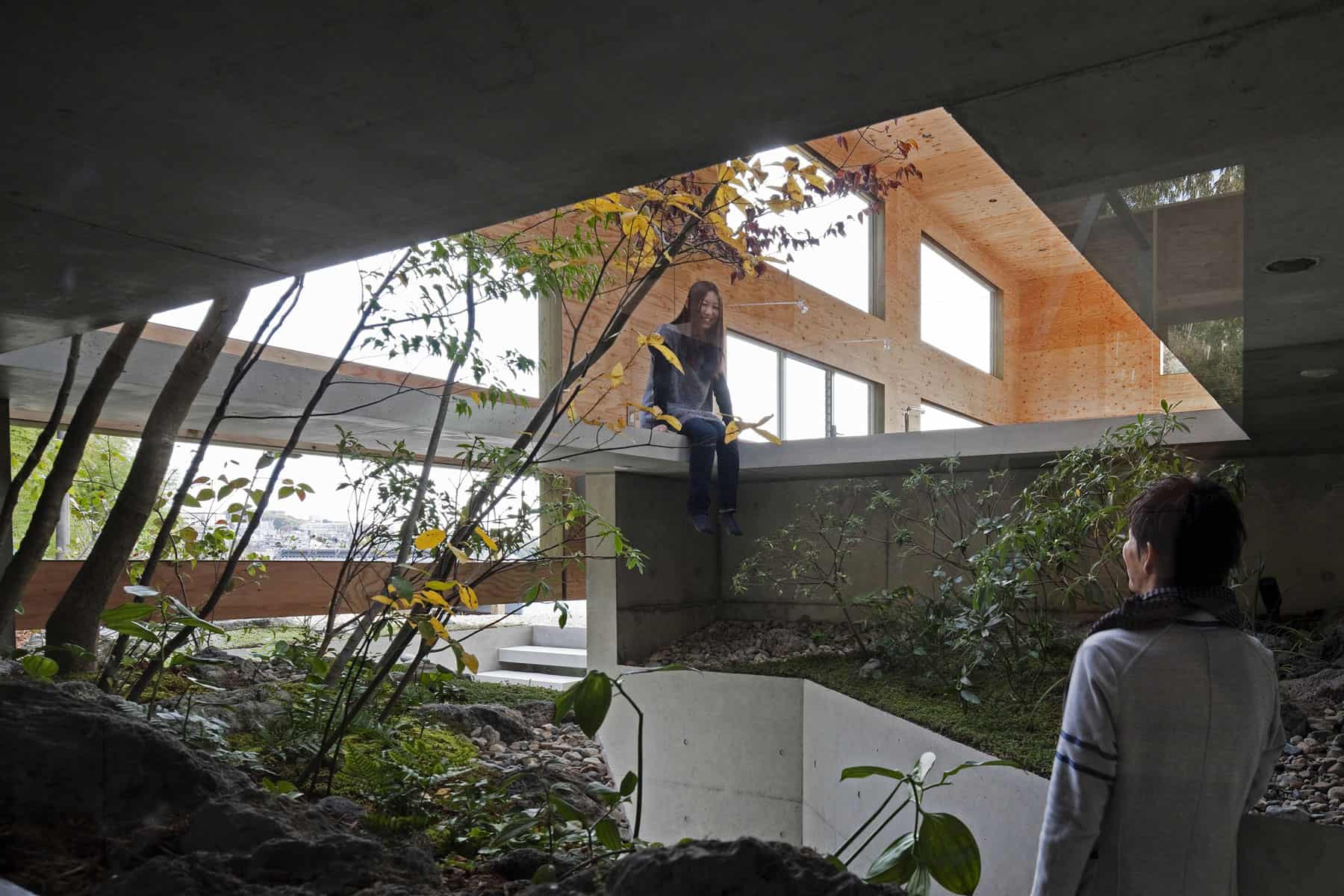 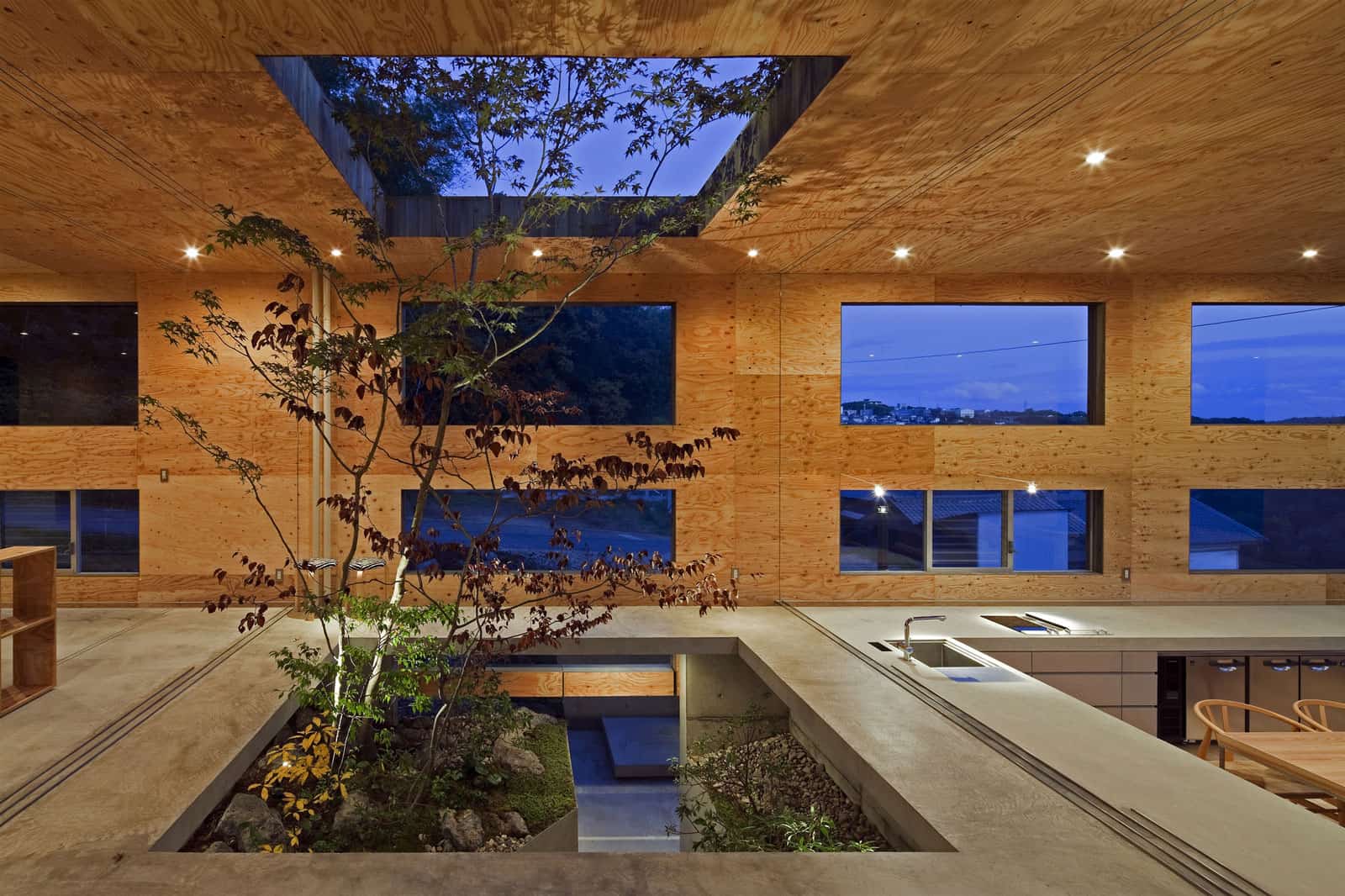 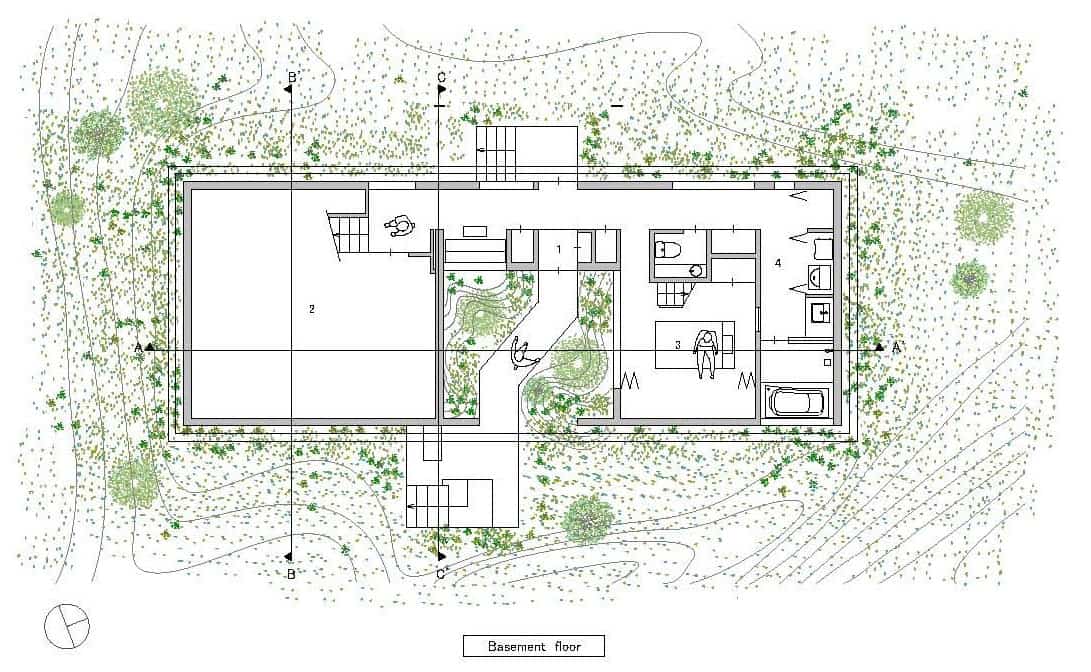 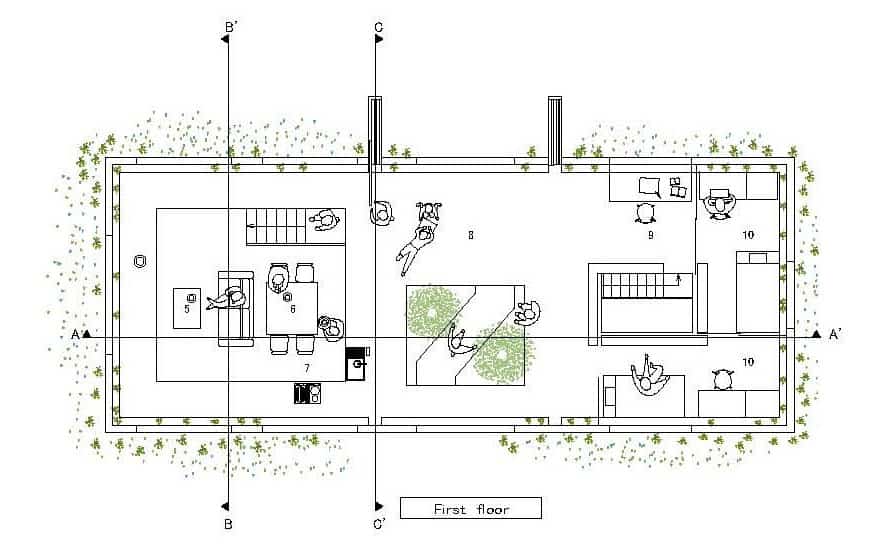 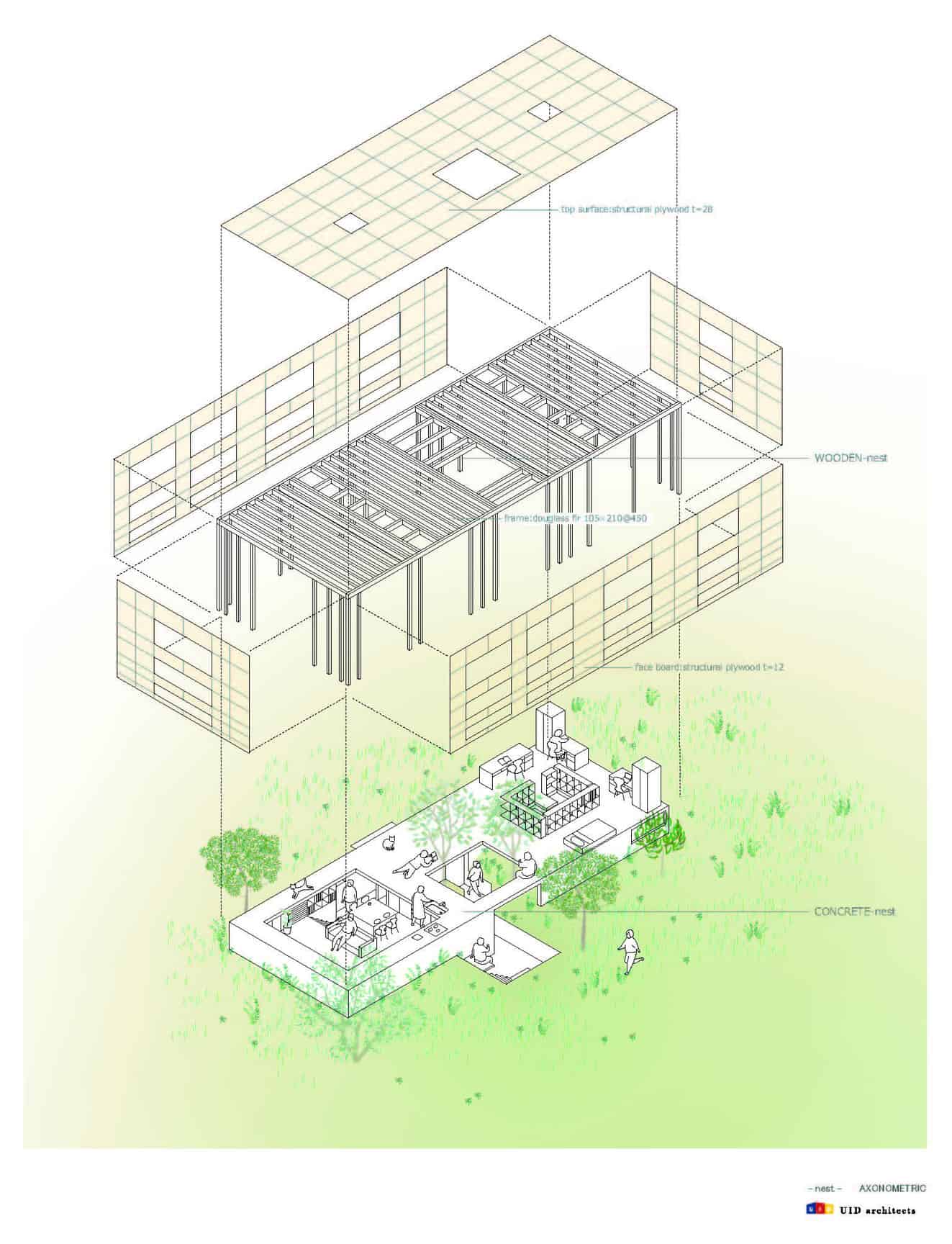 this two story contemporary home built for two daughters and their mother is located in Onomichi, a city in Hiroshima Prefecture, Japan. 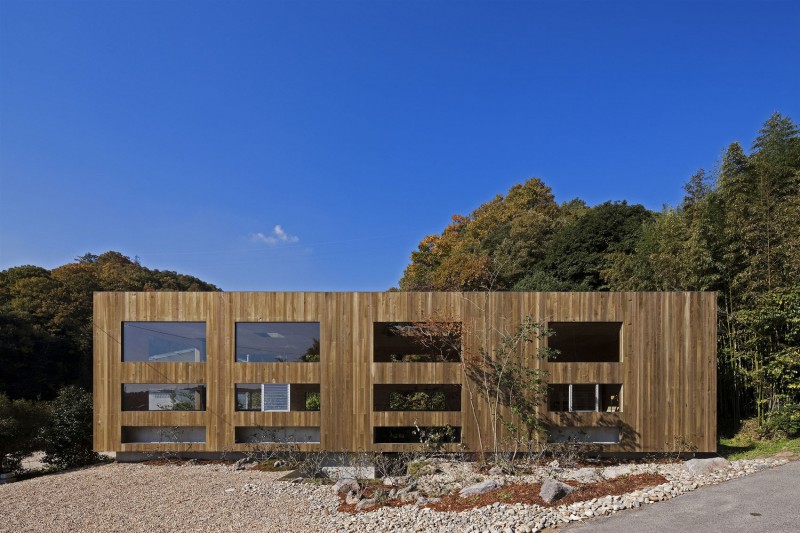 “This is a small house planned in a forest surrounded by rich nature. The site is located in the foot of a mountain with scarce neighboring houses in Onomichi City. The family is consisted of two daughters, their mother and their loving cat. Since there are only three women, we thought it would be appropriate to gently connect a boundary of the place’s environment and architecture, allowing close distance between the family members. It is to seize the environment as non-dividable, similar to creatures that generate their nest under elements that cover forest’s ground. It is like a principle that expands from a nest in a forest, to a forest , then to the earth, and ultimately to the universe.

This time we sought a single space that comprehends the surroundings and the house by rethinking elements such as floors and walls that make up architecture. Specifically, in the ground layer some spaces are connected to each other by a tunnel that becomes a concrete anthill nest attached with a small entrance on the ground. Above the ground a floating wooden nest box composed of things like branches and fallen leaves cover the nest on the ground’s surface. Although non-sequence composition of the floors and the walls make the architectural elements look separated, they will become essentials that link architecture and the surrounding in succession, when viewing the environment on the whole.

The house will offer spaces that is similar to the forest’s comfortable sunshine and shade, which reside with natural climate. The house will be a nest in a forest that its territory will not be regulated.”

The Meera House by Guz Architects

The Roberts Residence by Division1 Architects

Black on White by Parasite Studio