The architects transformed a 60’s residence into an impressive two story contemporary home in a quiet cul-de sac of Johannesburg, South Africa. 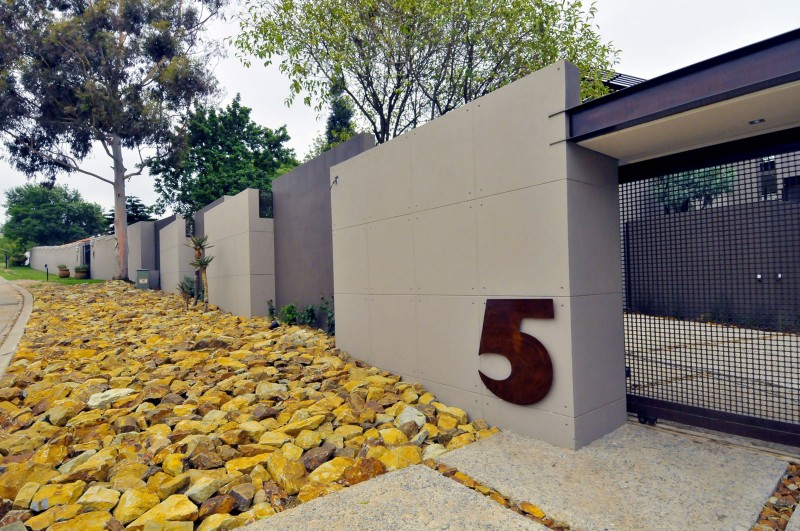 “Nico van der Meulen Architects have been called in for a total renovation of this 1960’s home, located in a prime area in a quiet cul-de sac of Johannesburg.

The architects had to start from the entrance, where they added in an aggregate driveway with broken rock in the joints and a very geometrical garden to complete the look of the space.

The look of the house has been valorized by an added atrium with a moat and a waterfall at the entrance. The moat runs all the way around the dining room and under the extended wing wall, where an oversize glass pivot door has been installed as a front door.

The ground floor is composed of an open plan, a double volume space with two living areas, a very large dining room with a kitchen and a lanai with one corner suspended from a massive, two storey high beam transversing the pool to adjoin the lanai with a timber deck on the opposite side.

The glass wall between the living areas and the lanai folds completely away to create one huge living space, with the second lounge area leading onto the garden, and the dining opening onto the moat.

From the kitchen one can see the living and dining area, the lanai, the pool and the garden. From here a door leads into a second kitchen and a double garage, with double staff quarters at the rear.

The study is a few steps higher than the living area, with a door leading into another double garage.

The home theatre and the guest bedroom both lead onto the garden through aluminum sliding doors. A guest toilet is placed in between the two rooms in the house.

The staircase is a floating creation made of steel, stone and glass and leads up to a pyjama lounge on the first floor. From the pyjama lounge one can reach the two kid’s bedrooms and the main suite.

The two kids’ rooms, which impeccably face north, have en-suite bathrooms and private dressing area. The main suite is an oversized space, with both the bedroom and bathroom opening onto a balcony, establishing an al fresco feeling. The main bedroom also has its own gas fireplace, with a large lounge area inside the bedroom.

There are no columns in this area, which contributes to the creation of a floating roof effect.

You can sit in the bath or stand in the shower and look out over the garden in privacy, while two atria enable the owner to ventilate the house safely while keeping this space totally inaccessible to unwanted visitors.”