It may look like the headquarters of a comic-book super hero or a post-apocalyptic hideout, but this converted factory doubles as an office and residence for its creator, Ricardo Bofill, who is located in Sant Just Desvern, Barcelona, Spain.

Bofill and his team at Taller de Arquitectura completed the project in 1975 after a massive renovation that involved the demolition of 22 of the abandoned factory’s 30 original silos. 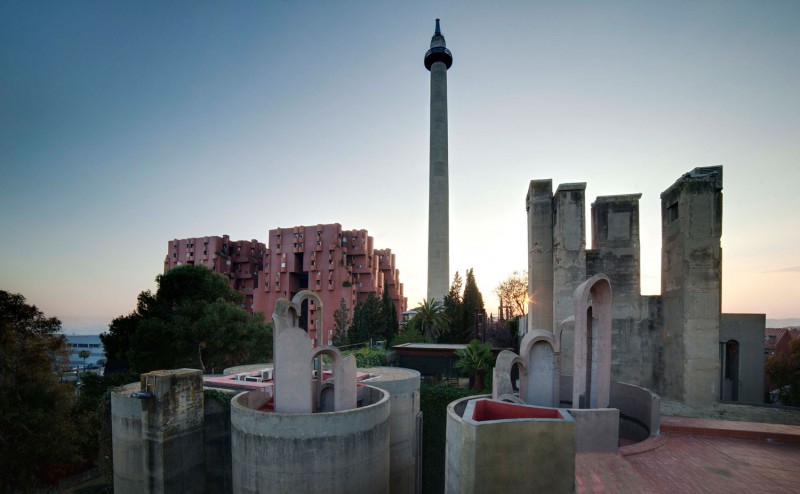 “In 1973 Ricardo Bofill discovered a cement factory, part of an industrial complex from the turn of the century, comprising over 30 silos, underground galleries and huge engine rooms.

He decided to transform it into his head office.

The factory, abandoned and partially in ruins, was a compendium of surrealist elements—stairs that climbed up to nowhere, mighty reinforced concrete structures that sustained nothing, pieces of iron hanging in the air; in short, huge empty spaces filled nonetheless with magic.

The transformation process began with the demolition of part of the old structure, laying previously concealed forms bare, as if the concrete had been sculpted. Once the spaces had been defined, cleaned of cement and enhanced with surrounding, newly-planted greenery, the process began of adaptating the site to the new programme.

Eight silos were left standing, and turned into offices, a modelling laboratory, archives, a library, a projection room and a huge space known as ‘The Cathedral’, the venue for subsequent exhibitions, lectures, concerts and a whole range of cultural activities linked to the architect’s professional life.

The complex stands in the midst of gardens of eucalyptus, palms, olive trees and cypresses. It also features Ricardo Bofill’s house and guest rooms.

The factory is a magic place which strange atmosphere is difficult to be perceived by a profane eye. I like the life to be perfectly programmed here, ritualised, in total contrast with my turbulent nomad life.”

The W Hotel in Barcelona by Ricardo Bofill

The Syncline House in Boulder by Arch11

Galatea by Details A Design Firm