Home » House » The House in the Thicket by Kasper Bonna Lundgaard M.Arch

The House in the Thicket by Kasper Bonna Lundgaard M.Arch

Kasper Bonna Lundgaard created this sustainable, rustic home in 2012 for his own family, located in Hvasser, Norway.

Special consideration had to be taken to accommodate the needs of the architect’s developmentally disabled, youngest brother. 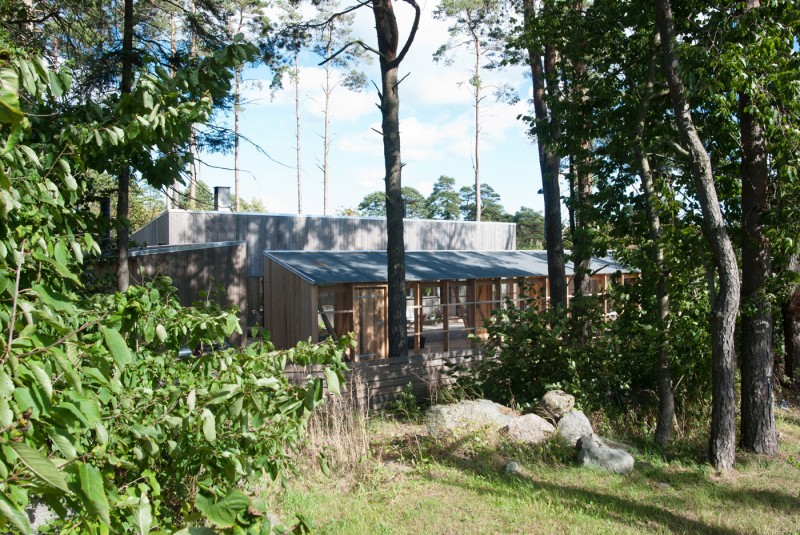 The House in the Thicket by Kasper Bonna Lundgaard M.Arch:

“My mother and my two youngest brothers needed a smaller and simpler house to live in. My youngest brother, Hans, has got Downs-syndrome. It was obvious that they should have a house that afforded less maintenance and fewer square metres. An other important aspect about the house where the need to make both a stimulating and a safe home for Hans.

The house is thought as a place to grow up and a place to grow old. I wanted to make a home where a life can be lived. A home with lots of places and situations, but with a small amount of heated indoor space.

On the island where the house is situated, in the Oslo-fjord, in the south of Norway, there is a long, lush summer. However, there is a constant wind from the south and south/west most of the year particularly whenever the sun is out.

The result of these parameters became a dwelling consisting of a small main-house, a guest-house, a greenhouse and a car-port. The buildings are situated so that they form an atrium or a court. The idea was to make a home that can exist both outdoors and indoors.

During the summer-months, the home is in the atrium, the greenhouse and the surrounding woods. During spring and autumn, greenhouse and atrium becomes an extension of the main-house, and in the winter one retires inside.

The greenhouse is situated to the south of the atrium to act as a wind-break, while it still lets light through. Originally the plot consisted of a small thicket with pine trees. I kept as many of these as possible.

The main-house is divided into two parts. A private zone with bedrooms and bathroom, and a more public zone with kitchen and living-room. The two parts are divided by a functional wall used for storage.

The house-constructions consists of simple wood-frames, and was designed so that all building-materials could be hand-lifted in place. This was important as I was building the houses myself.

Seen in a sustainability-perspective, the dwelling represents a simple philosophy. It has a small heated indoor area, while it is designed to use the garden for a larger part of the year. As far as possible, all building materials are renewable and environmentally friendly.

Almost all building-materials (including insulation) are made from wood, and the dwelling is only heated with renewable firewood. Wall and roof-constructions are semi-permeable or, in other words, breathing.

These measures gives a good indoor climate, low energy-consumption and probably also a small CO2-footprint. At the same time it is easy to use and control for the inhabitants.

This project is a weekend house by a riverside. The site is slanted toward the river, and the north wind peculiar to this place runs along the slope. The house is plotted parallel to the river, and the shape coming out of the slope looks like a ship waiting for the launching.

Two volumes are divided into two abstracts, one as private space with child room and master bedroom and another as public space with kitchen and living room. The outside deck between the two volumes is used as an outside dining area. On the upper part, parallel with the river, the bathroom and the guesthouse are located.

In addition, this house is planned as a place to spend quality time with the family as well as with friends who rent villas nearby. A big dining table made with concrete is placed in the big living room, which leads to the deck space pushed out to the river.

The pre-cast concrete panel is used for the outer wall and wall of north side and east side. This protects the house from north wind and the afternoon sun. Riverside house was designed to exist lightly yet have a strong presence.”

A 7,500-Square-Foot Family Bungalow in Nanded