ALT | House on the Cliff by Fran Silvestre Arquitectos

This modern residence is a 2012 project by Fran Silvestre Arquitectos that is located in Calp, Spain.

The building sits atop a rocky cliff that provides dramatic views of the sea. 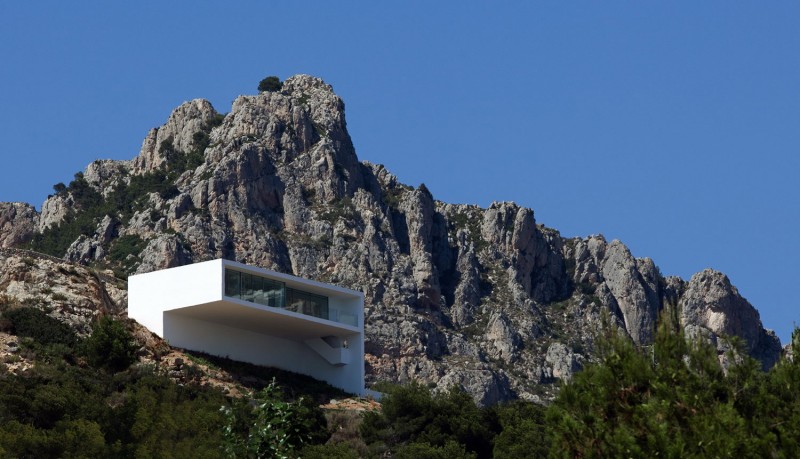 ALT | House on the Cliff by Fran Silvestre Arquitectos:

“We like the virtue of architecture which makes possible constructing a house on air, walking on water…

An abrupt plot of land overlooking the sea, where what is best is to do nothing. It invites to stay.

A piece that respects the land’s natural contour is set in it.

Above, a shadow, the house itself, looking calmly at the Mediterranean.

Under the sun, the swimming-pool brings us closer to the sea, it becomes a quiet cove.

In the inflection point, the stairway proposes a evocative path, a garden in the basement…

Due to the steepness of the plot and the desire to contain the house in just one level, a three-dimensional structure of reinforced concrete slabs and screens adapting to the plot’s topography was chosen, thus minimizing the earthwork.

This monolithic, stone-anchored structure generates a horizontal platform from the accessing level, where the house itself is located.

The swimming-pool is placed on a lower level, on an already flat area of the site. The concrete structure is insulated from the outside and then covered by a flexible and smooth white lime stucco.

The rest of materials, walls, pavements, the gravel on the roof… all maintain the same colour, respecting the traditional architecture of the area, emphasizing it and simultaneously underlining the unity of the house.”

Fran Silvestre Arquitectos Design a House in a Pine Forest in Paterna, Spain

Apartment in Moscow by Geometrium