This rustic-meets-contemporary interior is a 2010 project by Gianluca Fanetti, principal of Studio Fanetti, that is located in Campodolcino, Italy.

Its blond wood interior was meant to give the impression that it was carved from a single block of larch. 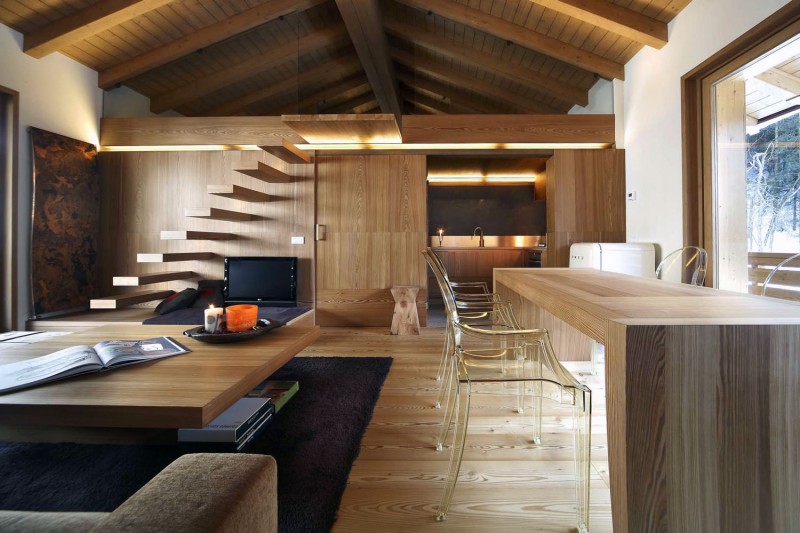 “The apartment had such height that the firm has decided to use to split the space.

It was given a second wood  skin that gives a special atmosphere of uniformity.

It looks like a block of wood from which was “carved a house” and the various local and furniture arise from the block by subtraction of matter.

There seems to be no need for walls like a second skin made of larch. In the study and construction of this apartment, particular attention was paid to the combination and processing of materials: larch wood wax, as well as stone slabs in large format tailored to the floors, antique iron beams with treatment acid to the backbone of the loft and filling encaustic, also with wax finish, the walls of bathroom and kitchen.

Coatings and fillings alternate shaved walls with plaster and deliberately left blank in order to lighten the effect paneling and markedly increase the perception of interior space.

The internal design has resulted in the organization of the spaces designed in such a way as to make possible the more articulated and functional.

The entrance opens onto the living area entirely in larch continues in the kitchenette.

The living area, intentionally no continuity to other areas areas, then opens into a second space is amazing for the articulation of the flows of both visual and walkway.

Opening the door of the large cube of wood leads to the sleeping area where a central staircase divides the two bedrooms and leads upstairs where we find the study on suspended double bedroom.

A transparent floor opens up space otherwise a bit ‘stuffy. The tour continues in the area for guests with two large mattresses, sofas in so far as the ceiling closes truss.”

Interno I by Alfredo Vanotti

Apartment in Warsaw by Hola Design