Completed in 2009, this three-story contemporary home is located in Vancouver, Canada. 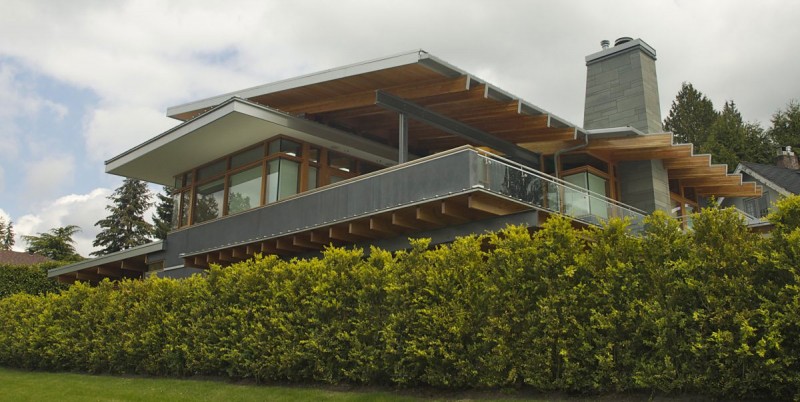 “Situated on the south facing slopes of Vancouver’s north shore mountains, the Chosun residence pays homage to the tenets of modern architecture while incorporating distinctly regional elements of exposed wood and timber to create a clean, contemporary West Coast esthetic.

The three-level home has its basement strategically located below grade to maximize buildable floor area while still displaying a modest footprint to the surrounding neighborhood. The home is laid out on a simple open plan principle with the key day-to-day activity areas of kitchen, living and dining nestled around a large bluestone chimney – a primary vertical element that visually anchors the building to the site and constitutes the heart of the home.

The roof of the main floor is composed of a tongue and groove fir deck supported by exposed 3×10 Douglas Fir rafters and extends itself outwards into the surrounding landscape. Large planes of floor-to-ceiling glass capture views of ocean and mountains to the south and allow for a seamless integration between the interior and exterior space.

A large single sloped metal roof with exposed fir deck and deep glulam beams mirrors the slope of the site and covers much of the second level. A skylight running the near full width of the roof illuminates an open tread wood stair and its wood-lattice dividing wall below.

The home is built with both post and beam and traditional 2”x6” wood frame construction. Paired steel channel beams and columns are left exposed – as are wood rafters and beams – illustrating a belief that the ‘bones’ of a building can often be the most beautiful and expressive part of it.

The Chosun residence represents a regional adaptation to a modern esthetic that allows it to straddle the seemingly incongruous worlds of a big city metropolis and rugged mountain landscape.”

Kevin B Howard Architects Design a House in the Foothills of Tucson, Arizona

A Palace in the Mountains by Eduarda Correa