This contemporary weekend home by Keiji Ashizawa Design is a 2007 project that was built next to a river in Chiba, Japan.

A bold contrast has been struck between the transparency of its public areas and the protection offered by its private spaces. 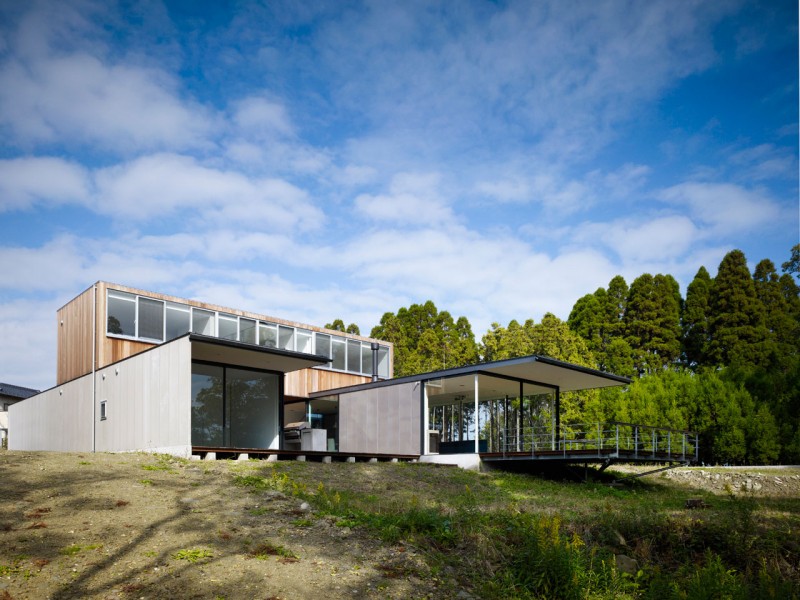 “This project is a weekend house by a riverside. The site is slanted toward the river, and the north wind peculiar to this place runs along the slope.

The house is plotted parallel to the river, and the shape coming out of the slope looks like a ship waiting for the launching.

Two volumes are divided into two abstracts, one as private space with child room and master bedroom and another as public space with kitchen and living room.

The outside deck between the two volumes is used as an outside dining area. On the upper part, parallel with the river, the bathroom and the guesthouse are located.

In addition, this house is planned as a place to spend quality time with the family as well as with friends who rent villas nearby.

A big dining table made with concrete is placed in the big living room, which leads to the deck space pushed out to the river.

The pre-cast concrete panel is used for the outer wall and wall of north side and east side. This protects the house from north wind and the afternoon sun.

Riverside house was designed to exist lightly yet have a strong presence.”

The House in the Thicket by Kasper Bonna Lundgaard M.Arch