This contemporary home is a 2010 renovation by Peter Legge Associates that is located in Ballsbridge, Dublin, Ireland.

The aim of the project was to solve the problems of the original Victorian design while preserving the home’s personality. 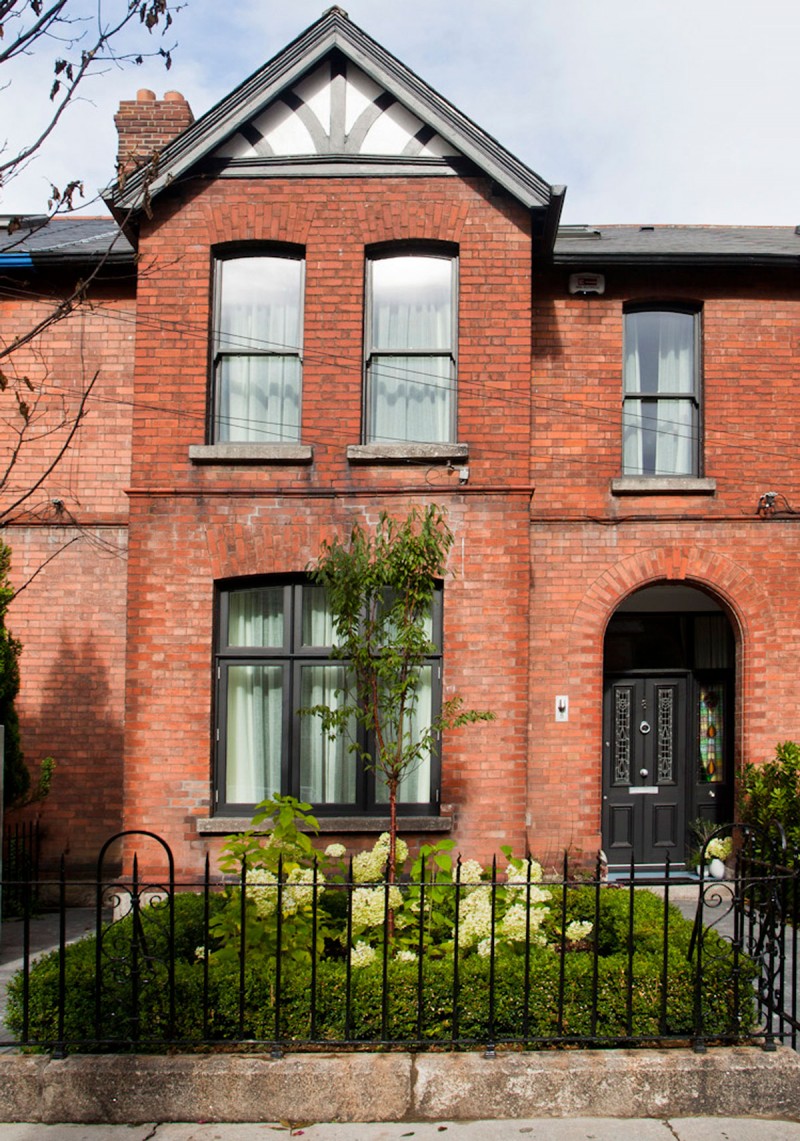 Ballsbridge. The site on a short cul-de-sac, is occupied by a late 19th century red bricked terrace house facing south east with a small railed front garden and a rear garden with a narrow service lane behind.

The clients, a young couple with growing family, were anxious to transform a dwelling designed to service a previous century’s lifestyle into a 21st century,  easily run and maintained family home.

Both parents work in a design orientated business and engaged positively with our design team.

Many of the existing period features were intact, plasterwork cornices, woodwork, doors architraves and skirting; it was agreed that they be 100% retained, these being an integral part of the dwellings original construction and character.

Virtually every Victorian and late Edwardian dwelling in the British isles was designed to facilitate a stratified society, where the servants were expected to live and work in blatantly uncomfortable conditions; convenience, orientation and quality spaces were irrelevant.

This generally resulted in a kitchen with a clutter of irregular unrelated rooms, mainly in the return block to the rear of the principal accommodation.

Our first thoughts on entering a hall that did not obviously lead anywhere were to get light and sight of the rear garden. The removal of back rooms and all the solid rear walls could immediately open up the dwelling to the garden beyond.

The new interconnected spaces of kitchen, dining and utility would now relate directly to the principal living spaces to the front and also to the garden.

It would now be possible to see from the hall right across the kitchen and dining to the sun lit garden beyond. The faceted single storey extension to the rear provides additional utility and storage space.

Due to an actual excess of anticipated sleeping accommodation needs, the dining area could be enhanced by the elimination of the existing bedroom over, thus creating an attractive airy double height space overlooked from the first floor landing.

While maintaining all the intact period features the first floor would be remodelled to accommodate a master bedroom, dressing room and bath/shower en suite with an adjacent nursery over the hall. The rear return at half landing level would include the void over the dining space, a study/library and walk in hot press.  The attic would be renovated with additional bathroom inserted.

The rear demolitions and temporary supports were all carefully executed to the structural engineers’ specification and there was absolutely no evidence of movement in the buildings structures above during construction.

The brickwork salvaged from the demolition was cleaned and re-laid for the solid elements of the new extension. European oak framed windows and doors completing the green roof-topped extension.

Responding to a young design conscious, fun client while remaining sensitive to the existing period features an emphasis was placed on quality craftsmanship in the interior. Existing floors were retained but sanded and caulked.

A high efficiency, condensing gas boiler was used to feed under floor heating in most areas with each room independently controlled.

Rooms with radiators controlled in the same way. In combination with the above, solar evacuated tubes provide for the domestic hot water needs. The walls are all insulated with breathable, soy based spray insulation that is also very effective against air leakage.

A playful response to a unique client, the relationship between old and new explored throughout”