Home » House » House in the Himalayas by Rajiv Saini

House in the Himalayas by Rajiv Saini

This contemporary residence by Rajiv Saini is located in the Himalayas of Kasauli, India.

The sloped concrete roof was inspired by the mountains that surround the home. 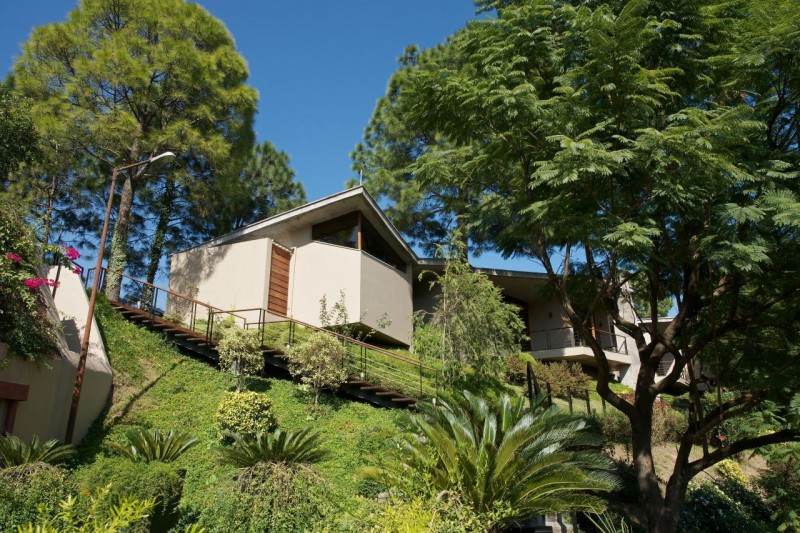 House in the Himalayas by Rajiv Saini:

“We were approached by clients (who were more friends by now, having worked on multiple projects together over the years) to build for them a holiday house they could enjoy with friends over long weekends, away from Delhi, where they lived.

The site is a privately owned hill, located amidst the Himalayan ranges near the cantonment town of Kasauli, which is a two hour drive from the northern city of Chandigarh (designed by Corbusier).

The hill is a narrow linear stretch of land (measuring around 5 acres) running north to south, with a road winding around its foot on three sides.

Not wanting to see the sight of a fleet of cars (that would normally accompany the holidaying entourage)around the house, we took a motorable road up the hill to about three fourths the ascents, where we tucked a cave like car park into the hill.

From here one can either take the timber stairs, or the open hydraulic platform lift ( a concession for the elderly parents who equally use the house in Delhi’s harsh summers) that takes one to the wooden cantilevered walkway bridge leading to the front door.

Working with a very limited area of flat land to build upon, the challenge was to create for the client the 4 bedroom house he desired spread around 8000 square feet of built up area.

We clearly did not want a two storey structure come up in this pristine natural environment, so we zeroed in on the idea of creating a wing running along the eastern length of the hill, and a wing running the western length, displaced by a level, such that the roof of the western wing becomes a terraced deck for the upper eastern wing. A small area of overlap of the two volumes allows for a staircase to facilitate vertical movement between the two floors.

As a result of this you drive around the hill first encountering the houses cantilevering upper eastern volumes, and only as you turn around the northern tip, does the lower western side become visible, reading as a single storey once again .

A geometry of inclined concrete planes capped by an origami like concrete roof ( inspired by the hilly mountain ranges all around) defines the upper volume which encloses the entrance lobby and two bedrooms to the north of the entrance and the living dining , kitchen ,staff and utilities to the south of the entrance.

In the lower western volume are located 2 bedrooms, a Multimedia room, stores and a small massage and steam room. Bedrooms and bathrooms in each wing are arranged as a series of independent volumes cantilevering out from the hill slope, with all of them opening out onto wooden decks.

Teak timber has been used for floors throughout the rooms while local Indian grey slate lines the surfaces of the interstitial circulatory corridors, continuing the grey of the exposed concrete ceilings and walls.

A free-standing centrally located fire place with a copper chimney delineates the living from the dining area. Similar copper pipes have also been used to channel rainwater elsewhere, when negative ceiling slopes cause water to collect in central areas.

A large cantilevered wooden viewing deck, a couple steps higher than the house, offering stunning views of the snow capped peaks has been created on the northernmost tip of the hill.”