This home, located on the Ortega y Gasset Street in Madrid, was designed in 2012 by Beriot, Bernardini Arquitectos.

The predominant color in the home’s decoration is white, which adds to the sense of space and peace felt once inside. 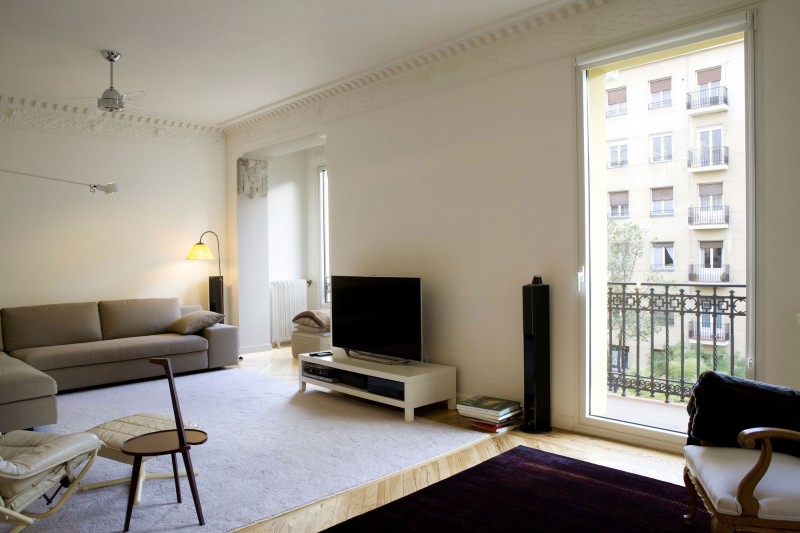 “The project consists of a comprehensive reform of a 200m2 (2150 square feet) house on Jose Ortega y Gasset Street, Madrid.

The existing house had barely been modified from its original construction in its southern half, corresponding with the main spaces, preserving in these the floors of melis pine wood and its original ceiling moldings. The proposal is to maintain and enhance these elements, but also to open the space, formerly divided into multiple rooms and corridors, to get a large living area. The key operation is to cut at some point the existing partition, leaving on the roof the markings of the old spaces with their striking moldings, like vaults or canopies formalizing specific spaces. This way are defined, in a single, continuous space, the entrance, the kitchen and dining room.

The rest of the house, without pre-existing elements of interest, is organized in a simple manner, leaving in the rear facade a large bedroom with an en suite bathroom and dressing room in the old hall. In addition, special attention is devoted to limiting the length perception of the back corridor.”

i! arquitectura Designs a Contemporary Home with Stunning Views Over Madrid

DG I by Camarim Arquitectos